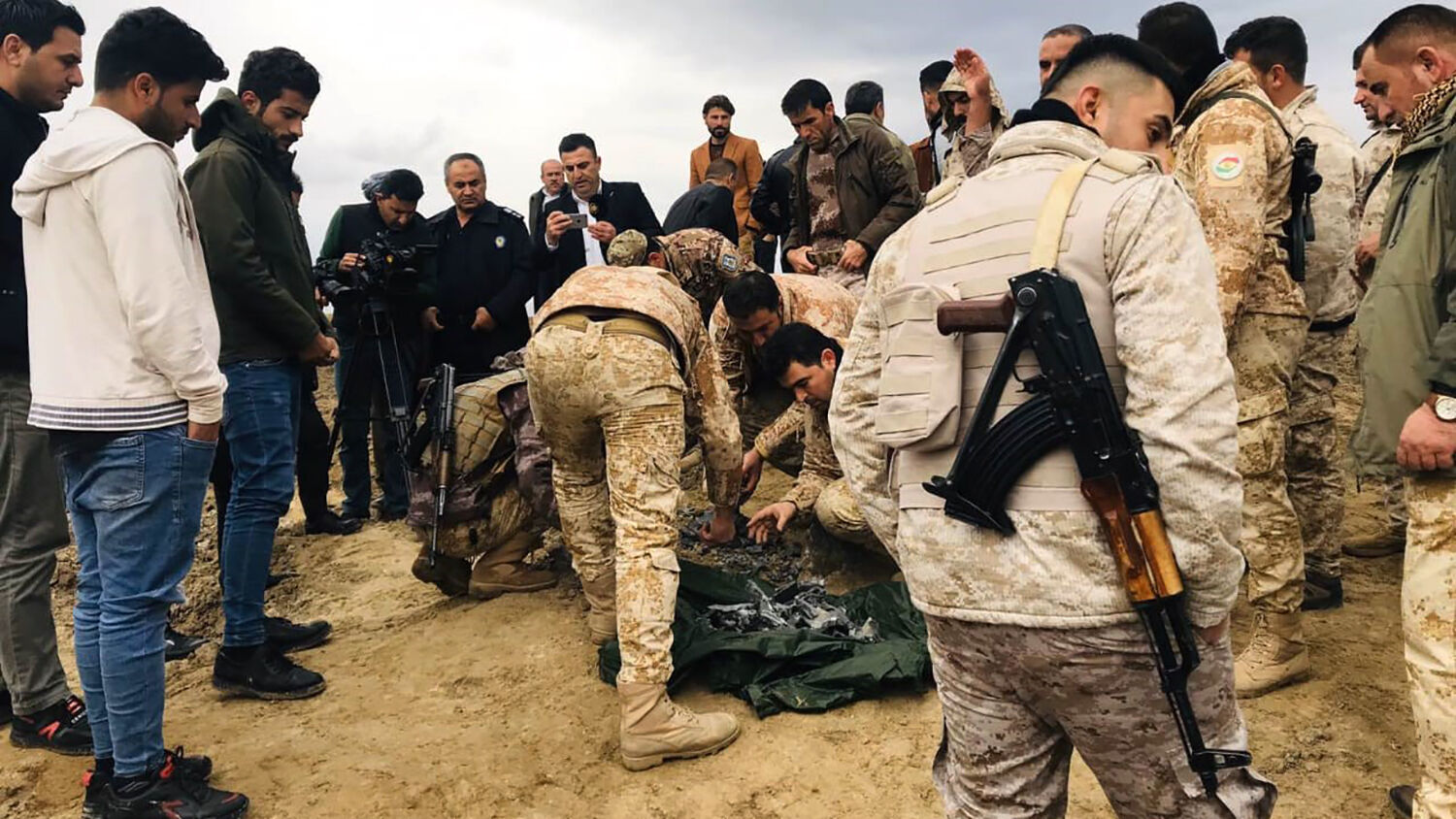 President Trump has restored deterrence against Iranian attack. Will he now turn over Iraq?

jerusalem
Iran’s awaited response to the death of its arch-general Qassem Suleimani came overnight as it fired over a dozen ballistic missiles at United States bases in neighboring Iraq. No American, Iraqi or coalition servicemen were killed in the strikes, which will likely allow the serious attack to pass without a U.S. response.

According to the Associated Press, the attack was “Iran’s most direct assault on America since the 1979 seizing of the U.S. Embassy in Tehran, and Iranian state tv said it was in revenge for the U.S. killing of Revolutionary Guard Gen. Qassem Suleimani.”

Around 2 a.m. Iraqi time, most of the missiles landed at the Ain al-Asad air base, home to 1,500 U.S. soldiers and other anti-Islamic State forces. A few other missiles landed near a base in the Kurdish capital of Erbil, also home to U.S. forces. Two missiles failed to detonate.

The Ain al-Asad air base is likely a symbolic target for Iran, as it was the first base used by the United States following the toppling of Saddam Hussein’s regime in 2003. It was also the first Iraqi base visited by U.S. President Donald Trump in December 2018.

Nevertheless, since no U.S. servicemen were killed in the attack, there will be no need for the United States to respond. Comments from both the U.S. and Iran show that it is unlikely any further direct strikes will be forthcoming.

President Trump’s tweet immediately following the attack indicated that his redline for U.S. retribution had not been crossed.

All is well! Missiles launched from Iran at two military bases located in Iraq. Assessment of casualties & damages taking place now. So far, so good! We have the most powerful and well equipped military anywhere in the world, by far! I will be making a statement tomorrow morning.

A statement from the Islamic Revolutionary Guard Corps (irgc) during the attack, codenamed “Martyr Suleimani,” warned of more attacks if the “Great Satan” responded to its missiles.

However, a tweet from Iranian Foreign Minister Javad Zarif implied that the overnight missile strike was enough retribution for the death of Suleimani.

Iran took & concluded proportionate measures in self-defense under Article 51 of UN Charter targeting base from which cowardly armed attack against our citizens & senior officials were launched.

We do not seek escalation or war, but will defend ourselves against any aggression.

The fact that the missiles were fired directly from Iranian territory against American interests, a first for the 40-year-old Islamic Republic, will likely be enough to save face and deescalate the situation. Iranian media is also claiming that the United States is trying to cover up the supposed deaths of 80 Americans as a result of the strike.

Contrary to how it will be painted in Iran, the missile strike against America will be seen elsewhere as a fundamentally weak response to the death of its arch-terrorist general. It was not an accident that Iran struck these U.S. bases with so many missiles and without the death of any U.S. servicemen.

Prominent Iraqi analyst Michael Pregent told the bbc this morning that Iran used its precision-guided missiles in the attack to purposely “miss the American side of these Iraqi bases.”

All told, the nature of the Iranian strike is an acknowledgment that President Trump’s killing of Qassem Suleimani and his clear redline on American casualties have temporarily restored United States deterrence against Iranian attacks.

Since coming into office, President Trump and his administration have forthrightly acknowledged Iran as the foremost sponsor of terrorism in the world and the dangerous belligerent in the Middle East. Contrary to past U.S. administrations, Mr. Trump has not allowed the Iranian regime to hide behind its proxy organizations. Instead, the president has consistently blamed Iran for the actions of its proxy network, whether Hezbollah, the Houthis, Hamas or Shiite militias in Iraq. And when one of those proxies killed a U.S. citizen in Iraq on December 27 and orchestrated a march on the U.S. Embassy a week later, President Trump exacted revenge on Iran.

This crucial change in the U.S.’s perception of Iran was acknowledged in Lee Smith’s piece at Tablet Magazine last night. Smith wrote:

In making Iran accountable, Trump has knocked Iran down to its natural size—and likely made Americans safer from Iranian aggression than they have in fact been at any point in the last 40 years, during which Iranian proxies have repeatedly killed large numbers of Americans. Killing Suleimani is a much more important operation than those targeting [Islamic State] leader al-Baghdadi and even bin Laden, since it will likely shape the future actions of a state, not the leadership rotation of terror groups.

Iranian-backed terror isn’t a stubborn, unchanging fact of the international landscape, except to the degree that we made it so. The policy of appeasement that began in 1979 with the embassy takeover, culminated in the 2015 Joint Comprehensive Plan of Action (jcpoa) when the Obama administration flooded Suleimani’s war chests with hundreds of billions of dollars and legitimized Iran’s “right” to a large-scale nuclear weapons program. In line with the decades-long U.S. policy of augmenting the Iranian threat in order to avoid taking action against it, Obama said the only alternative to giving Iran the bomb was war.

Donald Trump was vilified when he exited the Iran deal in May. But in the eyes of the foreign-policy establishment, he committed an even graver sin by exposing the 40-year-old lie that U.S. policymakers, right and left, had cultivated to rationalize their collective unwillingness to protect Americans from Iranian terror.

In acknowledging that Iran is the head of the terrorist snake and holding Iran responsible for the acts of its proxies, President Trump has been able to restore deterrence against future attacks.

However, that deterrence does not announce the end of the Iranian regime or the beginning of the end. In fact, there are some worrying signs that after this face-saving Iranian reprisal, President Trump could make a decision that empowers the Iranian regime even more.

The Gift of Iraq

In the hours following the strike, Ayatollah Ali Khamenei gave a thunderous speech broadcast throughout Iran stating that “the people of Iran slapped America in the face” with the missile strike. The crowd followed with the usual “Death to America” and “Death to Israel” chants. Khamenei acknowledged that he was not satisfied with just the limited strike.

He also called for the ousting of U.S. forces from the Middle East. “This kind of attack is not enough. The U.S. must be uprooted from the region because they brought destruction to this region,” he stated.

The ayatollah’s link of the soft missile attack to the removal of United States forces from the region is interesting, considering a letter that made it to the press on Monday. The letter was from the United States Army to Iraqi military joint operations command, announcing that the U.S. was willing to move its forces out of Iraq. The letter was sent to Iraqi Prime Minister Adel Abdul Mahdi who said he received a copy of the letter in both English and Arabic. Abdul Mahdi said that he had asked for clarifications of the letter because there seemed to be differences in the Arabic and English versions.

While the U.S. government has claimed the letter was a draft, the very existence of a draft shows that the U.S. is considering removing its forces from Iraq.

Furthermore, many of President Trump’s most vocal supporters believe that now would be the best time to extricate U.S. forces from Iraq. Lee Smith, author of The Plot Against the President, wrote the following for the New York Post this morning:

The targeted killing of Iranian Quds Force Commander Qassem Suleimani last week broke an old taboo: Finally a U.S. president held Iran responsible for the proxies it uses to kill Americans. It was a strategic victory for President Trump and an opportunity to roll it into a political masterstroke, as well—the immediate and complete withdrawal of U.S. troops from Iraq.

In the piece, Smith lays out the case that despite the fact that America has spent billions of dollars and thousands of American lives, “Tehran has more influence with Baghdad than Washington does.” He continued:

Those who advocate staying in Iraq are arguing largely from an admirable but impractical principle—the U.S. must not cut and run. From that perspective, surrendering Iraq would give Suleimani one final victory from beyond the grave.

In reality, a U.S. withdrawal is more likely to cause problems for Tehran. The departure of U.S. forces would restore the regional dynamics to their natural state in which Iran is a Persian Shiite power surrounded by a sea of Sunni Arabs more keen for revenge than ever after the depredations suffered over the last two decades in Iraq as well as Syria.

While Smith is correct on his point that Tehran’s influence in Iraq is greater than the United States’, his following point that the Sunni Arabs would be able to counter Iran’s position when America withdraws from Iraq is far from assured. One could argue, as President Trump may, that it is not the United States’ problem whether or not the Sunni Arabs can stand up to Iran. Indeed, President Trump may follow Smith’s advice and use Suleimani’s death to let us “get out of the Iraqi quagmire on a high note.”

It is hard not to view surrendering Iraq as a final victory for Suleimani “from beyond the grave,” especially in light of what Bible prophecy says about Iran and Iraq.

Since 1992, Trumpet editor in chief Gerald Flurry has referred to Iran as leading the biblically prophesied group of Islamic nations that pushes the world toward war. This prophecy in Daniel 11:40 states, “And at the time of the end shall the king of the south push at him: and the king of the north shall come against him like a whirlwind, with chariots, and with horsemen, and with many ships; and he shall enter into the countries, and shall overflow and pass over.”

Because Iraq is prophesied to join this “king of the south,” or radical Islam, led by Iran, Mr. Flurry has forecast for decades that Iraq will eventually fall to Iran. A December 1994 Trumpet headline asked, “Is Iraq About to Fall to Iran?” That headline was repeated in 2003, when the U.S. ousted Iraq’s Saddam Hussein from power. Recently, we have shown Qassem Suleimani’s critical role in achieving Iranian dominance over Iraq.

While Smith is correct in asserting the strong grasp that Iran has over the Iraqi government, the removal of U.S. forces from Iraq will not presage a new era of Iraqi nationalism to stand up against the Iranian regime. In fact, it will have the opposite effect—Iraq will be swallowed up by Iran.

At the Trumpet we do not advocate a withdrawal or consolidation of U.S. forces in Iraq, we simply declare biblically based forecasts. Those prophecies foretell that Iraq will be engulfed by “the king of the south” and form a critical part of the radical Islamic kingdom led by Iran.

President Trump may have restored deterrence against Iran by killing Gen. Qassem Suleimani. However, the United States’ consideration of leaving Iraq at this very moment shows that Iran’s power in the region will not diminish in the long run. If you would like to understand how we can be so sure of an Iranian takeover of Iraq and the events that will follow, please read Gerald Flurry’s booklet The King of the South.