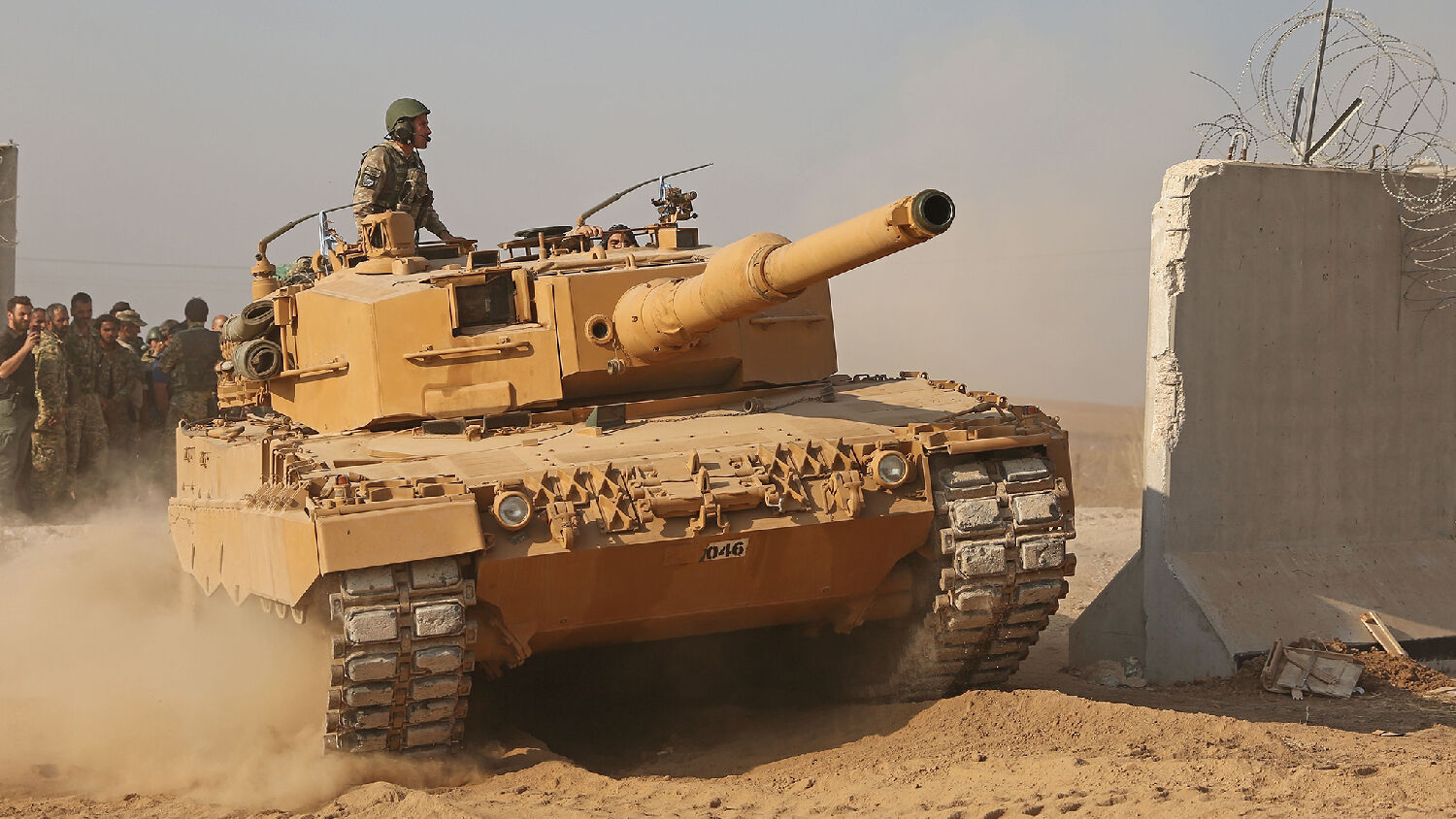 Turkish forces drive a Leopard 2 main battle tank on the border between Syria and Turkey in the Hassakeh province in northeastern Syria, on October 27.
NAZEER AL-KHATIB/AFP via Getty Images

Germans called for reduced arms exports in 2019. The arms industry did the opposite.

German arms exports reached record highs during 2019, as illustrated by figures produced by the German Ministry of the Economy and published by Deutsche Welle on December 27. Despite numerous calls for a reduction and some of the world’s strictest regulations, the world’s fourth-largest arms exporter is not backing away from its expanding role.

The last record high was in 2015, and successive years saw arms exports decline. This year has been an about-face for the German arms industry. Sales in 2019 were up 65 percent over the previous year, totaling roughly $8.8 billion.

This puts it among a select group of powerful nations that can influence conflicts around the globe by supplying high-quality arms.

Germany’s largest shipments in 2019 went to Hungary, Algeria and Egypt. Hungary purchased Leopard tanks after Prime Minster Viktor Orbán sought to double defense spending and shore up Europe’s eastern flank. Egypt and Algeria are important partners as well, for the influence they exert on vital waterways like the Suez Canal and the Mediterranean.

Germany has one of the most tightly regulated arms export policies in the world. In 2019, sales from German companies decreased while French companies’ sales increased (possibly due to German companies seeking a work-around for government restrictions). Even so, many Germans view these exports negatively and demand more restrictions be placed on certain nations.

Independent studies have confirmed that despite export bans to nations involved in conflict, German arms are still seeping into sensitive regions. Yemen is the most prominent example; it is crawling with German armored vehicles, tanks and even small warships.

Given Germany’s history, the arms industry is a controversial subject for its citizens. Whether they should rearm, and take on more military roles, has been one of the most common questions of 2019.

Trumpet executive editor Stephen Flurry discussed the question of rearming Germany on a Nov. 12, 2019, episode of the Trumpet Daily Radio Show, shortly after Spiegel Online published an interview with geopolitical commentator Robert Kagan. He told Spiegel that saying to Germany “We do want you to be a military power” is “a big gamble.”

He is right. Germany started two world wars within less than 30 years. Though the Cold War and American-led world order kept it at bay for decades, Germany is now more capable than ever before.

“Germany is a country fertile in military surprises,” warned Winston Churchill in 1934. This basic tenet of their national character remains true today.

After World War ii, nobody imagined a newly powerful, industrialized, militarily capable Germany rising from the rubble as quickly as it did—nobody except Herbert W. Armstrong, founder of our predecessor magazine, the Plain Truth. He warned on a radio episode in 1945, “From the very start of World War ii, [the Germans] have considered the possibility of losing this second round, as they did the first—and they have carefully, methodically planned, in such eventuality, the third round—World War iii!”

Real-world events back up the biblical prophecies the Trumpet has always relied on to forecast Germany’s rise.

Many of the industrial giants that make Germany’s armaments today took part in the Nazi war effort. By exporting to a wide array of countries, they gain expertise and capacity. If these manufacturers turned more of their efforts toward their own nation, Germany’s military would grow into a mammoth power.

The Bible predicts that Germany will lead a final resurrection of the European superpower, modeled after the Holy Roman Empire of old. The EU will be cut down to just 10 nations, with Germany at the forefront (Revelation 17:10, 12). Few see it, but as Trumpet editor in chief Gerald Flurry has said, a German-led Europe is the world’s “hidden superpower.” All it needs to do is keep some of these exports for itself and be led by a strongman.

In a January 2018 Key of David episode, Mr. Flurry stated:

Germany is not backing away from its arms exports. It continues to use these to forge partnerships and influence conflicts around the world. Yet exports are only part of the story. Germany has the ability to rapidly build up its own military, and to arm Europe.

Watch as global uncertainty continues pushing Germany to strengthen its military and capacity.

Europe’s hidden military strength should be a red flag to the world. But it’s also a sign of hope—Jesus Christ’s intervention—just beyond the suffering. To discover more about this crucial subject, read our article “Forging a Superpower” and request your free copy of The Holy Roman Empire in Prophecy.