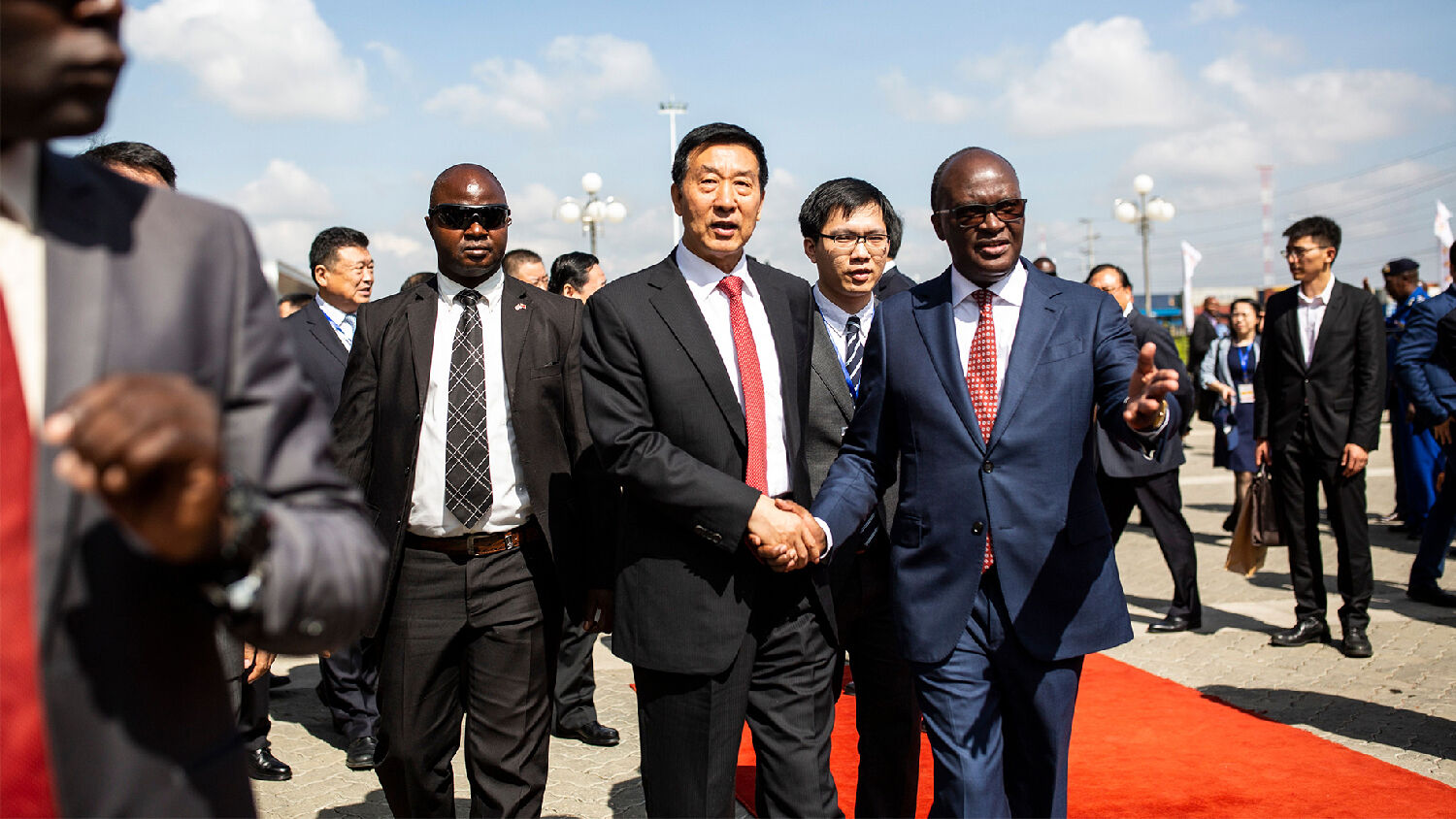 Special Envoy of the People Republic of China, Wang Yong and Cabinet Secretary for Transport, Infrastructure, Housing, Urban Development and Public Works, James Macharia, arrives at the Nairobi Terminus during the commissioning of the Standard Gauge Railway (SGR) Freight Operations to the Naivasha Inland Container Depot in Nairobi, on December 17, 2019.
PATRICK MEINHARDT/AFP via Getty Images

‘Implications of a takeover would be grave.’

Kenya launched freight operations on December 17 for a new extension on a multibillion-dollar, China-built railway line, which is funded on terms that could end up giving China control over some of Kenya’s most important assets.

At the inauguration ceremony, Kenyan President Uhuru Kenyatta called the opening a “new chapter” in Kenya’s development. “Today is another momentous day; a day when we add yet another brick in our quest to build a stronger foundation for our current and future prosperity.”

The new service runs from Kenya’s capital, Nairobi, to the Naivasha Inland Container Depot and is part of the greater Standard Gauge Railway (sgr), connecting Nairobi to Mombasa, Kenya—the largest and most valuable port in East Africa. Mombasa is not just the gateway into Kenya, but also into its landlocked neighboring nations Burundi, the Democratic Republic of Congo, Rwanda, South Sudan and Uganda.

H.E.President Uhuru Kenyatta has arrived at the Nairobi Terminus for the commissioning of the SGR Freight operations to Naivasha. Also in attendance is H.E. Wang Yong, special envoy from The People’s Republic of China. pic.twitter.com/UWCUtVbm4o

Since 2013, Kenya has accepted more than $5 billion from China for sgr construction, making it the largest infrastructure project since the nation’s independence. But in its first year of operation, the project reported losses equivalent to $98 million, rendering Kenya’s servicing of the loans unmanageable. Critics say that since shipping by truck remains a cheaper option for most freight, the sgr is unlikely to begin turning a profit.

Kenyan Auditor General Edward Ouko warned last November that the terms of sgr financing were written cryptically and designed to favor the China Exim Bank, which loaned Kenya Railways Corp. funds for the project. “[I]f Kenya Railways Corporation defaults in its obligations and China Exim Bank exercises power over the escrow account security,” Ouko’s office wrote in a Nov. 16, 2018, audit report, “[t]he China Exim Bank would become a principle” over some Kenyan assets, including the Mombasa port. “The kpa [Kenya Ports Authority] assets are exposed since the authority signed the agreement where it has been referred to as a borrower under clause 17.5, and any proceeding against its assets by the lender would not be protected by sovereign immunity since the government waived the immunity on the Kenya Ports Assets by signing the agreement.”

Bumpy ride. Kenya gov lowers estimate of 1st year’s revenue for new SGR railway by 44%. Every time a train runs along its Mombasa-Nairobi route it does so at a loss, adding to project’s debt at a time when loan repayments to China rise 6x. .https://t.co/H4E9r3dFAn pic.twitter.com/mFhVzzgkm0

Africa Stand noted that, in addition to the Mombasa port, Kenya could also be made to give China control of the Inland Container Depot in Nairobi. It wrote, “Implications of a takeover would be grave, including the thousands of port workers who would be forced to work under the Chinese lenders.”

Authorities in Nairobi and Beijing deny that a Chinese takeover of Mombasa port or other Kenyan infrastructure is imminent. But if China were to take control of assets it funded due to a failure of the receiving nation to repay loans, it would not be the first time.

In 2013, Chinese President Xi Jinping announced his plans to rebuild the Silk Road, an ancient network of trade routes that facilitated flow of goods, ideas and culture across Asia, the Middle East, Africa and Europe. The revived version, called the “Belt and Road Initiative” (bri) aims to connect 60 percent of the global population to China with vast infrastructure projects.

Sri Lanka was among the most enthusiastic nations to welcome China’s quick cash to build bri-related infrastructure. It accepted billions of dollars in loans for such projects as the Magampura Mahinda Rajapaksa Port in Hambantota.

This port is at a key location for China’s maritime “road.” But for the Sri Lankan economy, the port was a massive flop. Rather than fueling growth, the port (and other Chinese-funded infrastructure projects, such at the “world’s emptiest airport” in Mattala) sunk Sri Lanka into crippling debt.

By 2016, a third of Sri Lanka’s government revenue went toward servicing Chinese loans, and the country was forced to accept debt relief from the International Monetary Fund. But the imf provided only short-term relief, and the Sri Lankan government soon acknowledged that the only course of action was to hand China a controlling stake in the Rajapaksa Port for a period of 99 years. The handover set off alarms in Sri Lanka and beyond because it represented a Chinese victory with potential military applications. Foreign Policy said the move “provided Beijing with a deepwater port in the region in which it can dock its navy, off the coast of its key regional competitor, India.”

How China got Sri Lanka to hand over a port: A Times investigation reveals Beijing’s use of hardball tactics to collect from a weakened ally https://t.co/gY35dAXX5Y

Sri Lanka is often cited as the textbook case of China’s “debt-trap diplomacy.” But Djibouti, Fiji, the Maldives, Montenegro, Pakistan, Tonga and Zambia are all in similarly precarious positions, thanks largely to a lack of transparency in China’s bri loans. Experts fear that these nations may be compelled to hand certain assets over to Beijing. And now Kenya may be added to this growing list.

“China wants to avoid the impression that it is sinking its dragon claws into other countries,” said Lu Xiankun, senior research fellow at the Shanghai Center for Global Trade and Economic Governance, during a 2016 imd Discovery Event. But as bri further progresses, it is becoming clearer that for some nations, that is basically what is happening.

In the July 2014 Trumpet issue, editor in chief Gerald Flurry wrote about this approaching epoch. “These ‘times of the Gentiles’ are yet to be fully realized,” but “we are in the outer edges of this catastrophic storm,” he wrote in “What Are the Times of the Gentiles?”

He explained that the term “Gentiles” refers to “non-Israelite peoples,” adding that the Israelite peoples constitute “a lot more than the little nation in the Middle East.” In end-time prophecy, “Israel” refers mostly to modern-day America and Britain. (For a thorough explanation, order a copy of our free book The United States and Britain in Prophecy, by Herbert W. Armstrong.)

For decades, American and British supremacy has brought stability to much of the world. But in “the times of the Gentiles,” power is being transferred away from them and toward two non-Israelite powers primarily. “While there are many Gentile nations around today, when this prophecy is completely fulfilled there will be two major powers,” Mr. Flurry wrote. One of these will revolve around Germany, and the other around Russia and China.

China’s bri and related initiatives are shifting global power away from the Israelite nations and toward these other nations. The project’s imbalanced loan terms for nations such as Kenya and Sri Lanka make the perils of the shift more evident.

Mr. Flurry wrote that though the shift in global power now underway is alarming, it is closely tied to good news. He continued:

To understand more about China’s rise and the “good news” connected to it, read “What Are the Times of the Gentiles?” and “Brave New World (Made in China).”