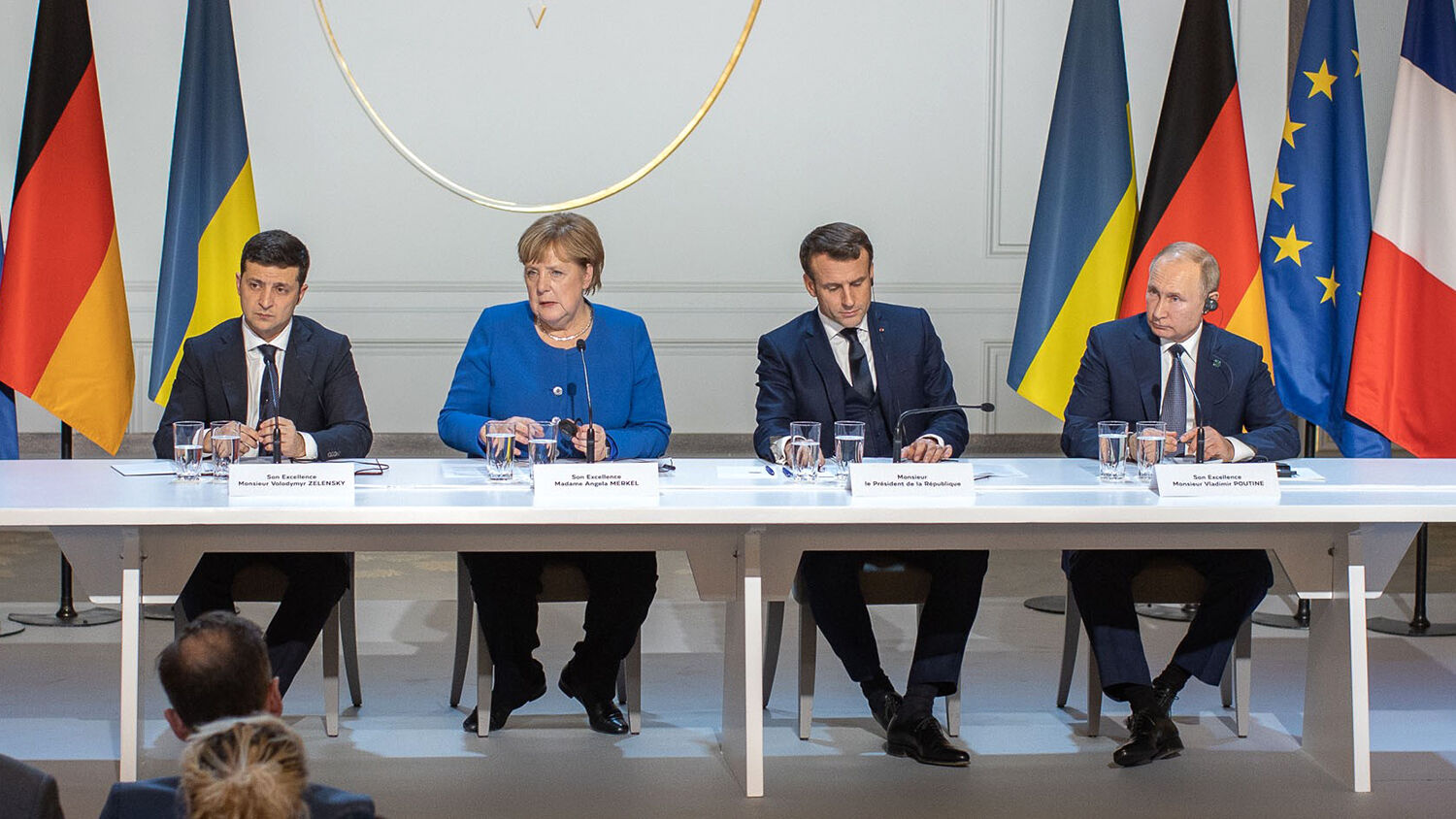 Ukrainian President Volodymyr Zelensky and Russian counterpart Vladimir Putin met for the first time at a summit in Paris, France, on December 9. With the support of French President Emmanuel Macron and German Chancellor Angela Merkel, the summit hoped to revive talks to end the Ukrainian conflict. As is often the case, the end result was unpromising. But Zelensky was not the only one who was disappointed by the failed diplomacy.

“At the Ukraine summit in Paris, Ukrainian President Volodymyr Zelensky meets Vladimir Putin for the first time—and he doesn’t know how much Europe still wants to support him,” Spiegel Online noted in “Zelensky’s Fire Baptism” (Trumpet translation throughout).

For anyone familiar with what has happened in Ukraine over the last six years, Europe’s lack of support is shocking. Step by step, Putin has extended his political and military influence in Eastern Ukraine. He has been stirring conflict and bullying the country economically. Just a few years ago, Ukraine sought to enter the European Union; today the country is slowly being swallowed by a reviving Soviet empire.

In a conversation with United States President Donald Trump, published on September 24, Zelensky said: “And I can tell you the following: I did talk to Angela Merkel, and I did meet with her. I also met and talked with Macron, and I told them that they are not doing quite as much as they need to be doing on the issues with the sanctions. They are not enforcing the sanctions. They are not working as much as they should work for Ukraine.”

Even worse, Germany is actively working to undermine Ukraine’s leverage in negotiations with Putin.

In cooperation with Russia, Germany is in the process of building the Nord Stream 2 gas pipeline. With Germany connected directly to Russian gas supplies, Ukraine is losing enormous value as a transit nation. It could also be cut off entirely from Russian gas supplies.

This wouldn’t be the first time German-Russian cooperation has led to Ukraine’s demise. As Trumpet contributing editor Andrew Miiller pointed out in “Germany and Russia’s Secret Genocide,” a man-made famine created by Soviet leader Joseph Stalin and aided by the Union of German Industrialists killed an estimated 3.3 to 7.5 million people prior to World War ii.

The Nord Stream 2 project is a strong warning that Germany is willing to sacrifice parts of Ukraine to Russia.

German-Russian Cooperation Out of Balance

In the recent Ukraine crisis, Zelensky and his predecessor have perceived German efforts to find a “compromise” as pressure to give up parts of Ukrainian sovereignty and territorial integrity.

Zelensky hoped he could return from the recent summit with tangible results. Russia agreed to a ceasefire, a comprehensive prisoner exchange, and a local troop withdrawal from the frontline. But Zelensky was disappointed. “What was achieved today was not enough for me, to be honest,” he said. “It was no victory—but at least we could discuss all the issues.”

While Zelensky was not satisfied, the summit results put the Ukrainian people at ease. Demonstrations that warned against surrendering to Russia have died down.

Some of Germany’s media, however, reacted strongly to the summit’s outcome. In “A Peace After Vladimir Putin’s Liking,” Zeit Online declared the summit Putin’s victory. In “Why the Summit With Putin Has Again Brought Nothing,” Bild.de wrote, “It feels like Eastern Ukraine is currently seeing its 30th ‘ceasefire’ since the Minsk Agreement of February 2015, but not much has changed in the war zone since.” Additionally, Bild.de titled its interview with former Ukrainian Foreign Minister Pawlo Klimkin “Why Merkel Is So Powerless When It Comes to Putin.” Germany’s Süddeutsche Zeitung demanded, “Merkel Needs to Set Putin Limits.”

Part of the reason for the media’s reaction is due to a recent event in Germany that caused many to fear Putin’s growing influence.

Following Russia’s refusal to assist in the investigation, two Russian diplomats were expelled from Germany. But many view Merkel’s actions against Putin’s aggression as far too weak.

Germany’s Yearning for a Strongman

Angela Merkel was once viewed as one of the few who could meet Putin at eye level; today, she seems powerless in comparison. Her failure to address the murder in her meeting with Putin illustrates that weakness. Fear that Russia’s influence could soon threaten Germany’s interest is increasingly growing. Germany needs a stronger leader than Ms. Merkel.

Part of Ukraine is almost certain to fall into the claws of the Russian bear. But we can be sure that Germany will not tolerate Russia’s aggression for much longer. In “The Prophetic Significance of the Ukraine Crisis,” Trumpet editor in chief Gerald Flurry explained that a strong German leader will soon rise to rebalance German-Russian cooperation.

Who will this man be?

Mr. Flurry wrote that it would likely be the man who has already taken a bold stance against Putin: former German Defense Minster Karl-Theodor zu Guttenberg. Together with Garry Kasparov, Guttenberg wrote a Time opinion piece titled “Putin Is Basking in an ‘Astonishing Leadership Vacuum’” on Jan. 6, 2014. They stated, “Russia’s behavior toward Ukraine might hand Europe an opportunity to become more united and effective in its foreign policy.”

As Germany increasingly seeks a leader who is willing to take a stand against Putin we can expect Guttenberg to rise in popularity.

The late educator Herbert W. Armstrong often referred to the “fear of Russia” as a trigger for Europe’s unification. But so far, Germany lacked an ambitious strong leader to bring that unity about. Request a free copy of He Was Right to learn more about Mr. Armstrong’s Bible-based prophecies.

Once Europe unites, it will have much more leverage in its negotiations with Russia. However, this will not be for Ukraine’s good. The Bible reveals that Europe is about to be divided between a German-led superpower and a resurrected Soviet empire.

As Mr. Flurry explained in his above-cited article, these two empires are prophesied to wreak great havoc on the world, yet these events will also lead to the best news this world could hear: the return of Jesus Christ. Various prophecies point to the fact that these two empires mark the end of man ruling over man, with the establishment of the Kingdom of God (Daniel 2).

Request a free copy of The Prophesied ‘Prince of Russia,’ by Gerald Flurry, to learn where Putin’s quest for dominance and Germany’s response to it will ultimately lead.