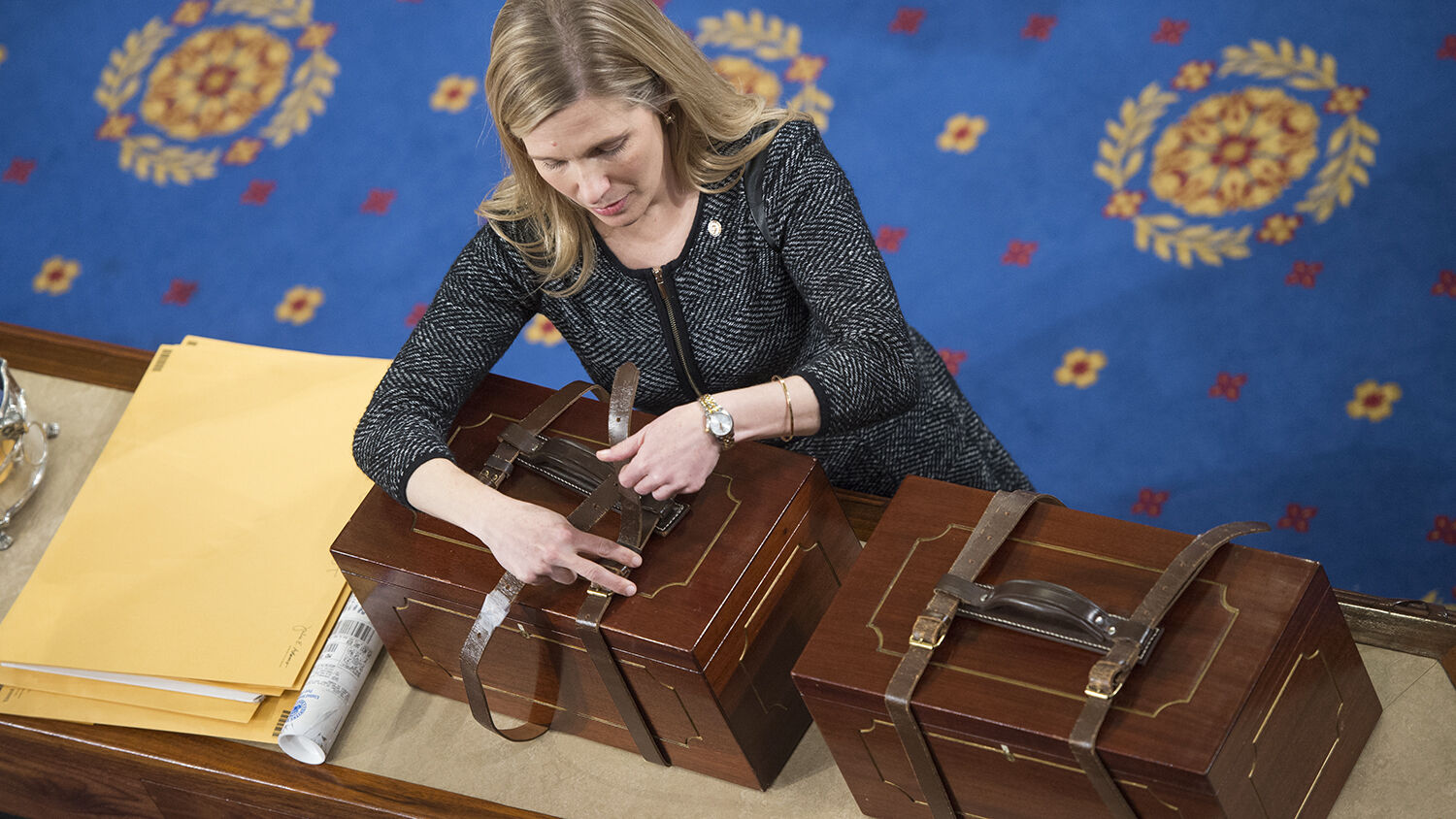 An aide opens Electoral College ballot boxes during a joint session of Congress to tally ballots for the president and vice president of the United States on Jan. 6, 2016.
Photo By Tom Williams/CQ Roll Call

The Founding Fathers included this key element in the Constitution for a reason.

Democratic presidential candidate Sen. Elizabeth Warren said at a campaign rally in Iowa on December 2 that she aims to be the last president elected by the electoral college. She hopes to have the popular vote become the means by which America’s president is chosen, which she says is “how a democracy should work.”

My goal is to get elected—but I plan to be the last American president to be elected by the Electoral College. I want my second term to be elected by direct vote. pic.twitter.com/a2Lj2a9F0F

Senator Warren is correct in believing that a democracy functions by popular vote. But the United States is not a democracy but rather a republic. As James Madison put it, the Founding Fathers were wary of “an overbearing majority” that saw democracies become “spectacles of turbulence and contention.” He went on to state:

[Democracies] have in general been as short in their lives as they have been violent in their deaths. Theoretic politicians, who have patronized this species of government, have erroneously supposed that by reducing mankind to a perfect equality in their political rights, they would at the same time be perfectly equalized and assimilated in their possessions, their opinions and their passions.

Essentially, Madison is arguing that a democracy assumes that the opinion or viewpoint held by the majority is that which is most sound. The founders feared “tyranny of the majority.” If there are no restrictions on democracy, the majority can do whatever it wants—including tyrannize a minority.

The Founding Fathers, having led the fight for freedom from a tyrannical government themselves, wanted to ensure that such tyranny would never prevail in their own land. It was against this backdrop that the question of presidential election was tackled.

The two main schools of thought at the time were for either the popular vote or Congress choosing the president. Both, however, would have led to the creation of a power imbalance, which could lead to tyranny. The only solution both sides agreed on was a compromise between the two: the electoral college.

This system is designed to make sure that all states are on equal footing when it comes to electing the president. The votes of the people don’t directly go to the candidate running for president. Each state has a certain allocation of “electors.” Each party has a selection of candidates for this position of elector, and they are the ones “competing” for the votes of the people. When people vote for a certain presidential candidate, their vote actually goes to the electors belonging to the candidate’s party.

The number of electors per state is according to its total number of members of Congress; i.e. the state’s members of the House of Representatives plus its two senators. In total, there are 538 electors in the U.S. After the votes have been cast by citizens, the electors then cast votes for their party’s candidate, with a majority of 270 votes winning the presidency.

This system was created to prevent any state having more importance over another when electing the president by simple virtue of a larger population. Were the election simply by majority vote, California alone, with a population of 39 million, would engulf the votes of states such as Colorado, Wyoming and North Dakota with a combined population of just above 7 million.

This system reduces this advantage. For example, in the 2016 presidential elections, Democratic candidate Hillary Clinton won a popular vote majority with a total of 65 million votes, compared to then candidate Trump’s 62.5 million votes. However, when it came to the number of states won, Trump won 30 states compared to Clinton’s 20.

This is the principle behind the Founding Fathers including this key element in the Constitution. They wanted to ensure that no state could run roughshod over the other by virtue of a larger population. They wanted to be sure that the bulk of American territory was represented, not just the geographically small, densely populated urban areas. And because of the electoral college, states such as Wyoming, with only three electors, compared to California’s 55, have a system that accommodates, not ignores, their opinions.

The electoral college is a vital part of the U.S. Constitution, and it fosters fairness and parity rather than doing away with it. It accommodates the views of all, not only those of the majority. As James Madison said, “In all cases where a majority are united by a common interest or passion, the rights of the minority are in danger. What motives are to restrain them?”

The fight by Senator Warren and several politicians against this institution points to an unfortunate truth: The United States is divided against itself. And as Abraham Lincoln quoted Jesus Christ, “A house divided against itself cannot stand.” Since President Trump’s election in 2016, the nation and government have become even more deeply divided along party lines.

In “Can President Trump Get Control of His Own Divided Government?” Trumpet editor in chief Gerald Flurry wrote that although the U.S. has leaders leading a resurgence in the rule of law and the prosperity of the nation, in President Trump and Attorney General William Barr, this resurgence will only be temporary. The nation is too divided to return to a stable government.

For an important lessons from history on how a government can become stable, watch Mr. Flurry’s Key of David episode “The Ultimate Humility.”