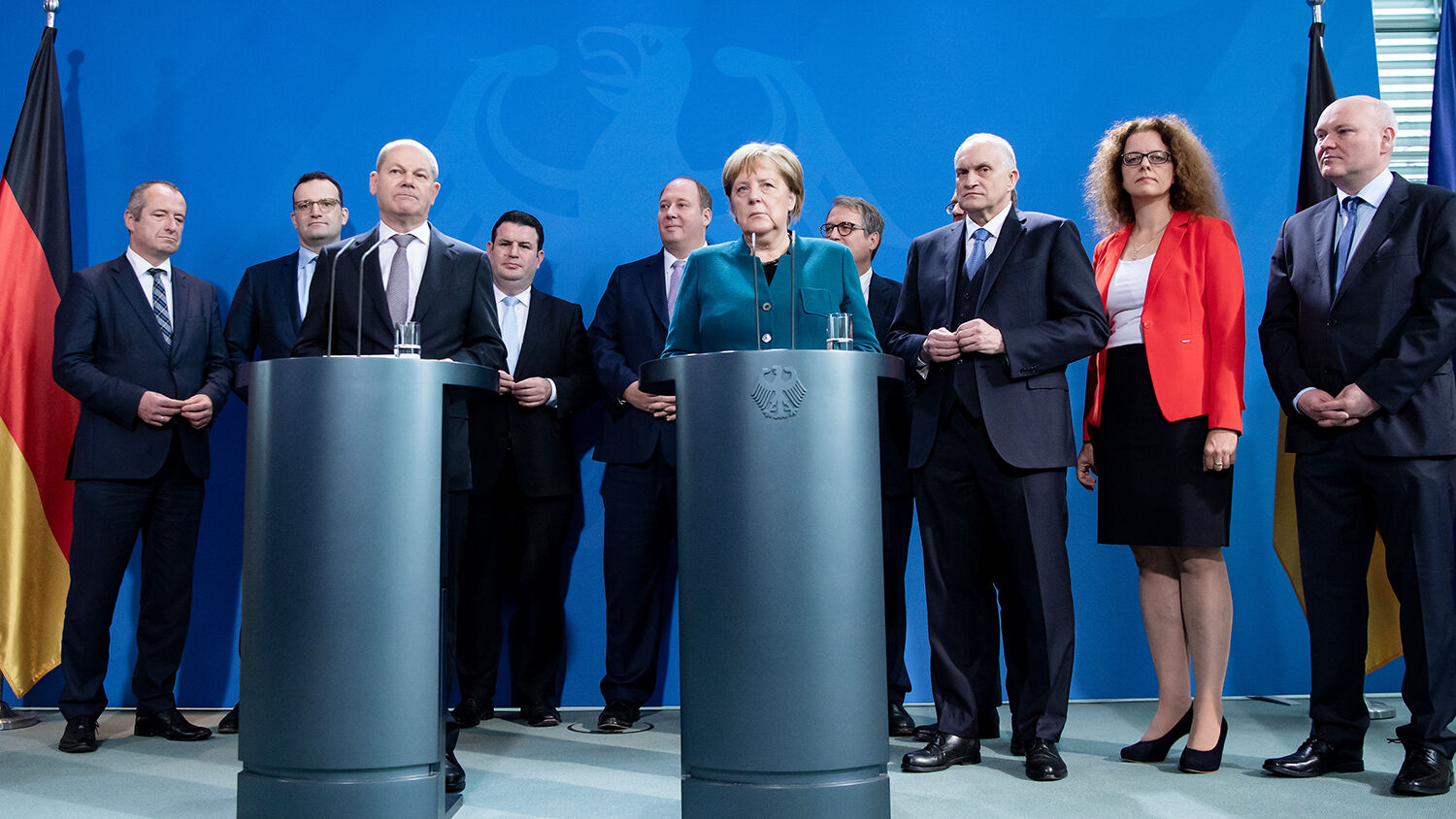 German Chancellor Angela Merkel and Finance Minister Olaf Scholz comment on the midterm review of the grand coalition at the presentation of the annual report 2019–2020.
Bernd von Jutrczenka/picture alliance via Getty Images

Merkel’s term is nearing its end; it may come a lot sooner than you expect.

For the last 14 years, German Chancellor Angela Merkel has led and shaped German politics. Throughout that time, she has faced many challenges. Although she has been able to overcome them all, her term could still be cut short by events out of her control.

Since March 2018, Merkel has led Germany’s governing coalition consisting of the Christian Democratic Union (cdu), the Christian Social Union (csu) and the Social Democratic Party (spd). Ms. Merkel’s term as chancellor hinges on the success of this coalition.

Recently, however, many in the spd have called for an early end to the coalition. As I explained in “Watch Germany’s Leadership Crisis,” this could have dramatic consequences for all of Germany.

The spd holds its annual party congress between December 6 and 8. Among other things, the party will decide on the future of the coalition. While it was previously believed that an early end of the coalition seemed rather unlikely, Merkel herself now seems to be addressing the issue with unusual passion.

On November 27, she gave a 38-minute speech in which she praised her coalition partner for the work of the last 20 months. She addressed the many successes the coalition accomplished, as well as the projects she still wants to tackle together. “We have a lot to do,” she said. “We have started a lot, but a lot still needs to be done. That’s why I think we should continue to work together throughout the legislature; that’s my personal opinion. Count me in. It would be nice, if you agree” (Trumpet translation throughout).

Germany’s n-tv.de reported that even her choice of clothes send a strong message to her partners: “On this gray November morning, the chancellor enters the Bundestag with a bright red blazer, black top and black trousers [the colors of the grand coalition]. Just over a week before the party convention of the spd, every detail can be decisive–even if it only strokes the soul.”

With an impassioned appeal to her coalition partner, Merkel has given her all to save a dying coalition. Her fear that the coalition is breaking after only 20 months is an ominous sign.

The first indication that her appeal was of no avail came on November 30. The spd decided on a new leadership duo that is very skeptical toward the coalition. Saskia Esken and Norbert Walter-Borjans previously campaigned on leaving the coalition. They watered down that opinion and now claim, however, that they will first try to renegotiate with the cdu-csu.

The fact that this new duo was voted in shows growing hunger within the party for a new start. But such a new start within the coalition seems unlikely. Chancellor Merkel and both party chiefs of the cdu and csu already rejected a renegotiation of the coalition agreement.

A break of the coalition on December 6 is becoming more and more likely.

While Chancellor Merkel has a mandate until 2021, she may choose to resign following the break of the coalition or form a minority government. Both scenarios would greatly increase Germany’s political instability.

BERLIN- Sharp critics of the coalition with Chancellor Angela Merkel’s conservatives won a vote for the leadership of Germany’s Social Democrats (SPD) on Saturday, raising big questions over the future of the government.

For years, the Trumpet, under the direction of editor in chief Gerald Flurry, has predicted that a strong German leader would follow on Merkel’s heels.

In the January 2018 cover story, Mr. Flurry wrote in “Germany—A New King Is Imminent”: “Chancellor Merkel is on her way out and is now a lame duck. Expect political and social crises in Germany and Europe, and public resentment and anger, to grow even deeper. Then watch for a strongman to take advantage and make his way to power through flatteries!”

Referring to a prophecy in Daniel 11:21, Mr. Flurry explained that Germany’s next leader will not come to power through an election but instead through deceit. Our January 2020 cover story asks, “Is this his hour?” In the next few weeks, we may receive an answer to that question.

If Germany’s grand coalition breaks before its term ends, Germany’s parliament could decide on another chancellor without holding new elections.

The Bible does not specifically reveal how this prophesied strong leader will come to power. But if you consider all these prophecies plus Europe’s current political turmoil, it becomes clear that we are about to see a dramatic turn of events in Germany.

I encourage you to read Mr. Flurry’s article “Is KT zu Guttenberg About to Come to Power?” and watch Germany closely over the next few weeks and months.