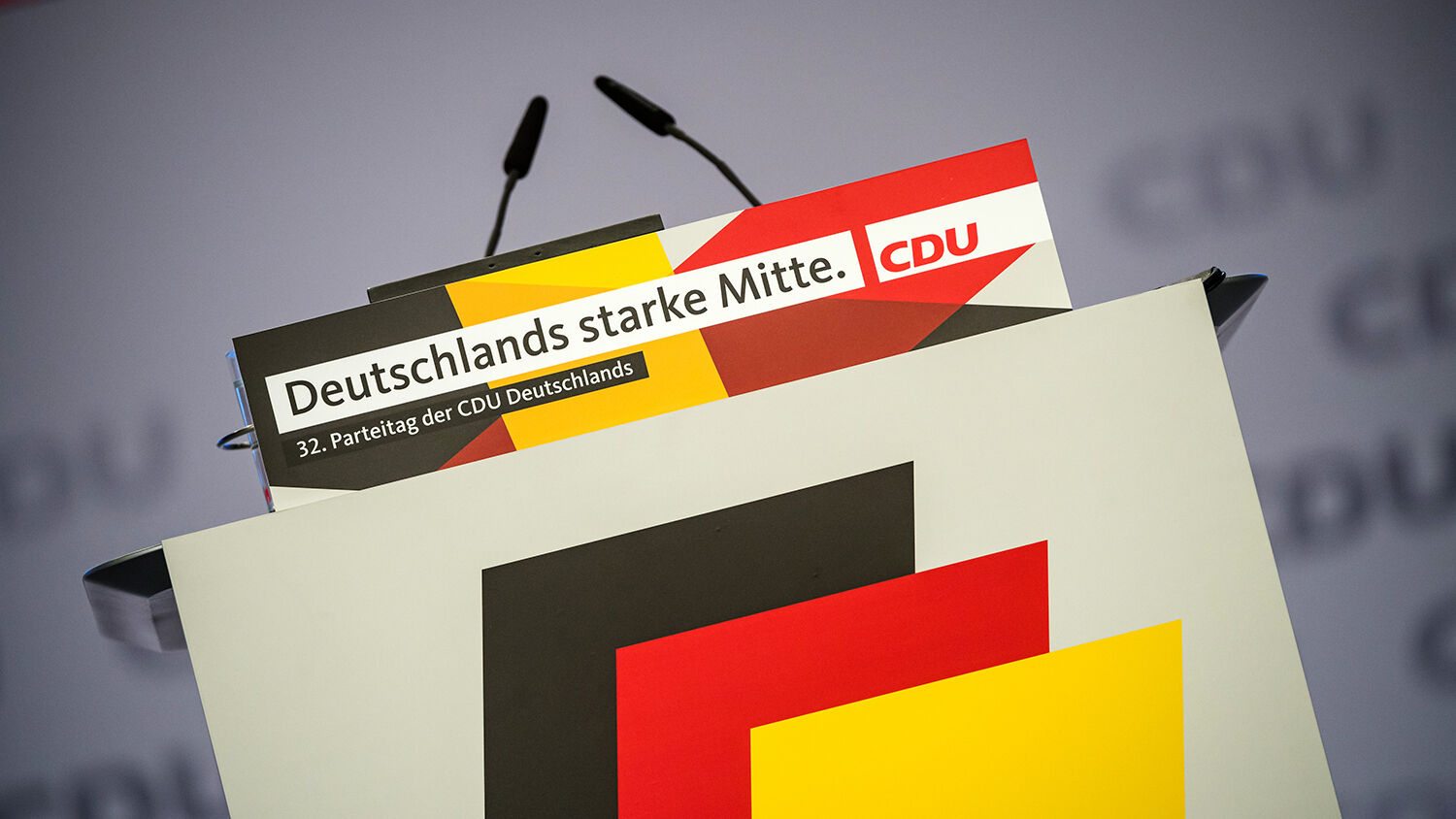 The lectern at the 32nd federal congress of the Christian Democrats on November 23 in Leipzig, Germany
Jens Schlueter/Getty Images

Berlin’s political turmoil is about to have a drastic end.

Germany’s post-World War ii government is facing an unprecedented crisis. The governing coalition between the Christian Democratic Union–Christian Social Union (cdu-csu) and Social Democrats (spd) is failing in the polls. Chancellor Angela Merkel is on her way out with no clear successor. The governing coalition could break as early as December. Almost everyone believes this will lead to Ms. Merkel’s early resignation and necessitate the appointment of a new leader.

It has been almost a year since Annegret Kramp-Karrenbauer succeeded Merkel as cdu chairwoman on Dec. 7, 2018. Many viewed her as the shoo-in for next chancellor. But her chances to succeed Merkel as chancellor are becoming increasingly slim.

Kramp-Karrenbauer has faced many critics and challenges, but her biggest test is likely yet ahead.

The spd will host its annual party congress between December 6 and 8, where it will not only decide crucial topics regarding the future of the party but of the coalition. Many Social Democrats want to end the grand coalition.

There are deep divisions within the coalition, and many voters are extremely dissatisfied with it. If the spd decides to pull out of the coalition, Chancellor Merkel may opt to resign from all political responsibilities or form a minority government. It is, therefore, possible that just one year after resigning from the cdu’s party leadership, Merkel could also resign from the chancellery.

Many in the cdu fear this scenario, but the spd has little to lose. The party once contended for first place in Germany’s national elections. But recent polls indicate it is now contending for third place with Germany’s far-right party, Alternative für Deutschland. The longer the spd continues in the coalition, the more voters it loses. Many see an end of the coalition as their only hope. The only question is when that end will come.

The leaders of the spd’s Young Socialists (jusos) demand an end to the grand coalition by December 6. jusos leader Kevin Kühnert announced that he will use the weight of the next generation to influence the party congress in two weeks.

The spd’s dilemma is compounded by the fact that the party leadership is currently in limbo: Its approximately 425,000 party members have until Friday to vote for a new leadership duo. The new spd leader will then officially be appointed at the spd’s party congress, where the fate of the coalition will be decided.

While the majority believes the coalition will continue, the spd’s decision remains unpredictable. An early end of the coalition is only a matter of time.

The cdu has also been preparing for this scenario. Kramp-Karrenbauer even believes that “the cdu is well prepared” if the spd ends the grand coalition in December. In an interview with Saarbrücker Zeitung, she said that she is ready to adapt to all scenarios.

No doubt Kramp-Karrenbauer sees herself in those scenarios as the cdu’s most likely chancellor candidate, but her party isn’t so sure about it.

If you have never heard of these candidates, it is likely because they haven’t played any significant role on the world stage yet. But the question of who will replace Chancellor Merkel should still concern everyone.

The sooner the governing coalition breaks, the more likely it will be that we will see Germany’s future leadership heavily disputed.

Kramp-Karrenbauer knows that rivals are lurking. In an attempt to rally the party behind her and silence critics, she told party delegates last Friday: “If you are of the opinion that the Germany I want is not the one you want … then let’s end it. Here, now and today.”

But her demand for rivals to speak now or keep forever silent didn’t end as planned. While Merz, her main rival, swore loyalty to her as party chairwoman, he has also indicated that the party’s chancellor candidate is not yet decided.

The simple fact is, neither Kramp-Karrenbauer nor Merz or any other single candidate in the cdu or csu inspires confidence among party delegates and voters. Merkel’s early departure from the political scene would prove devastating for the party’s unity.

If Germany’s governing coalition fails in December, it will be hard to predict the outcome. Yet the Bible speaks of this political chaos in various prophecies. Referring to a prophecy in Daniel 8:23, Trumpet editor in chief Gerald Flurry explained:

Germany’s political turmoil may very well climax in December or soon thereafter. It is therefore of utmost importance to understand who will succeed Chancellor Merkel.

We at the Trumpet believe that none of the above-mentioned candidates will fill Merkel’s shoes. Instead, our most recent Trumpet issue explains in detail whom we believe Germany’s prophesied strongman will be.

This prediction is not based on the opinions of political analysts, but on Bible prophecy. Biblical prophecies give a detailed description of Germany’s future leader, so much so that we believe that only one man fits the description: former Defense Minister Karl-Theodor zu Guttenberg.

We have proclaimed for 10 years that Guttenberg is the most likely candidate to replace Chancellor Merkel. He and his family recently moved back to Germany from the United States. Since his return, he has been commenting on politics more often. As the leadership vacuum grows, expect Guttenberg to fill the void.