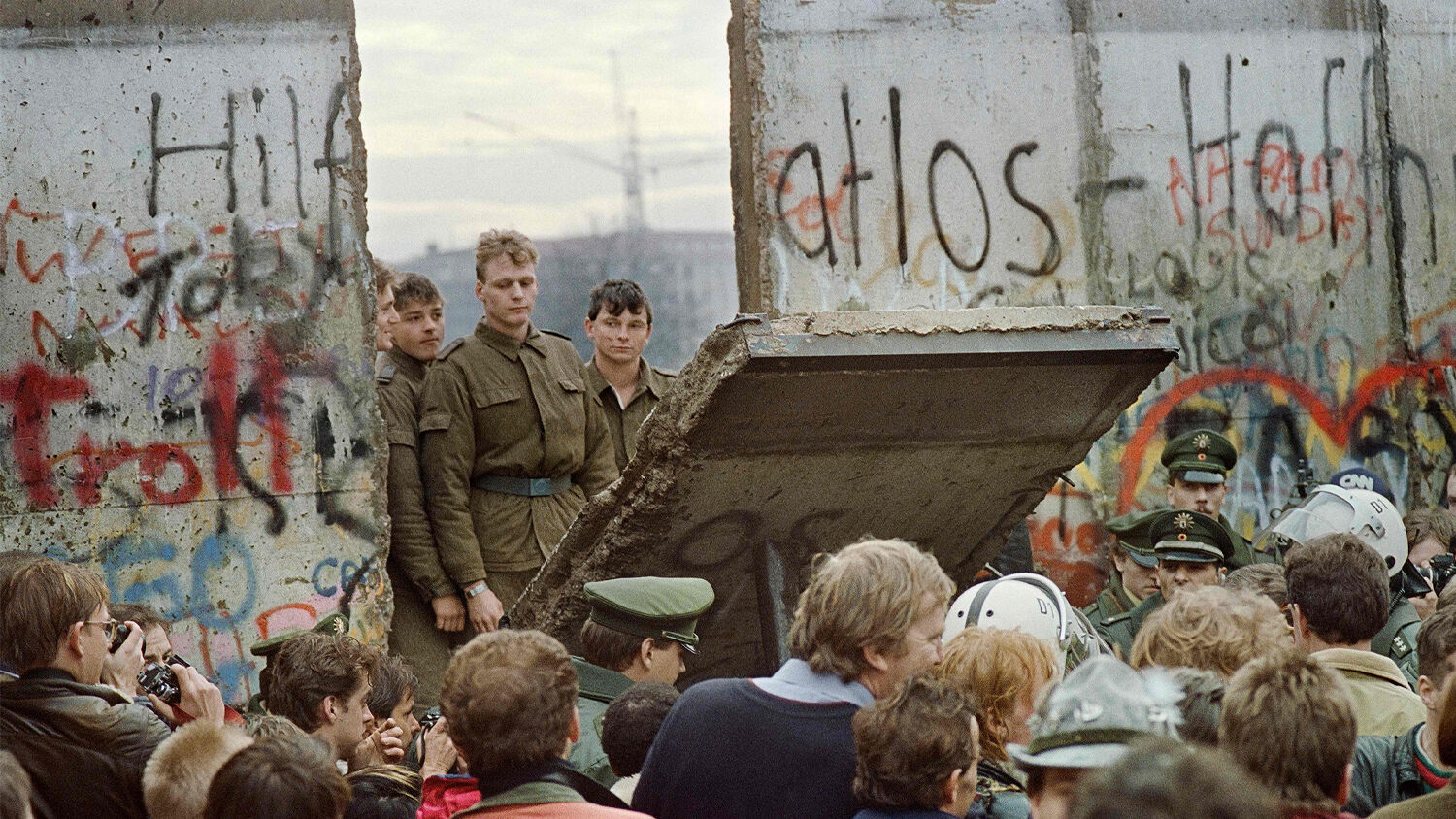 West Berliners crowd in front of the Berlin Wall early 11 November 1989 as they watch East German border guards demolishing a section of the wall in order to open a new crossing point between East and West Berlin, near the Potsdamer Square.
GERARD MALIE/AFP via Getty Images

For decades, the Berlin Wall divided the German capital city and stood as a symbol of the great gulf between Europe’s East and West.

Construction of the Berlin wall, 1961. pic.twitter.com/mWAPf2bjRK

But theologian Herbert W. Armstrong understood prophecies in the book of Daniel saying that in our modern era Europe’s Western and Eastern halves would fuse together. He also understood that prophecies in Daniel and Revelation showed that the Catholic Church—deeply influential in both Eastern and Western Europe—would play a vital role in bringing this prophecy of European unification to pass.

In February 1972, when Eastern Europe seemed permanently welded to the Soviet sphere and entirely subject to its compulsory secularism, Mr. Armstrong’s Plain Truth magazine wrote, “One of the biggest roles desired by the Vatican is that of mediator between East and West. The Vatican … will continue to do its part in courting the Eastern European countries.”

As the 1970s continued, Eastern Europe remained in the Soviet Union’s grip. Churches were demolished by armies of secret police, and religion was actively suppressed. Warsaw, Poland, was one of the most stifled cities in the Eastern bloc. Jan Prokop, a professor of literature who lived there at the time, described it as “this everyday grayness of life without hope, just survival.”

But in June 1979, the grayness of the Polish capital began to give way to something else.

Windows in the sterile, Stalin-era shops and apartment buildings began springing to life with festive shrines: crucifixes, flowers, rosaries and depictions of Jesus and Mary. The Poles were preparing to welcome one of their own, whom the Communist government had reluctantly allowed permission to visit his home country: Pope John Paul ii.

Despite government efforts to minimize the crowds, some 10 million Poles—almost one third of the nation—turned out to see the 59-year-old pontiff. Most of those who were unable to attend one of his numerous outdoor masses followed his nine-day, six-city pilgrimage on television or radio.

His message was highly emotional. “I cry from all the depths of this millennium,” he publicly prayed. “Let your Spirit descend and renew the face of the Earth, the face of this land.” He candidly told his countrymen: “You must be strong with the strength of faith. When we are strong with the Spirit of God, we are also strong with faith in man. … There is therefore no need to fear.”

The message of faith resonated deeply in the hearts of the Polish people. Emboldened by the pope, they pushed aside their fear of the anti-religious government. Crowds repeatedly erupted into shouts of “We want God! We want God!” By chanting for God, the very antithesis of communism, they were calling for regime change.

Mr. Armstrong took special interest in John Paul ii’s visit. In January 1980, he wrote: “The character, personality and actions of the Polish pope, John Paul ii, indicate more than possibly that he may be the pope to offer his good services to unite the nations of Europe once again. European nations want, seriously, to be united. Of themselves they are unable. John Paul ii could make it possible.”

Fourteen months after John Paul ii’s visit had sparked the revolutionary fire, a workers’ strike gave birth to Poland’s Solidarity movement. It was a workers’ rights crusade, but they were fueled by the Catholic spirit.

The movement showed the Soviets that Poland’s Catholic heritage was glowing hot once again and was on the cusp of resurfacing after years of suffocation. “The power of the papacy was never more visible,” said theologian Michael Novak, “and the Soviets learned this to their dismay: that [the pope] could turn their empire inside out.”

Back in Rome, John Paul ii remained firmly committed to the cause: He wrote severe letters to Soviet leaders; he allied with United States President Ronald Reagan; he prayed publicly and frequently for the success of Solidarity.

Mr. Armstrong died in 1986 before his forecasts about the Vatican and John Paul ii came to pass. But the pope’s efforts sent shock waves rippling throughout the Soviet Union, from Budapest to the Sea of Japan. And 30 years ago today—on November 9, 1989—these convulsions culminated in the East German people toppling the Berlin Wall. From there, the shock waves led to the dissolution of the Soviet Union and the routing of Communist influence from Eastern Europe.

The Berlin Wall fell 30 years ago this week and the world cheered for freedom and human rights pic.twitter.com/utMO4niohx

The fall of the Berlin wall didn’t just mark an end to tyranny - it gave the people behind the Iron Curtain a choice. Most of them chose @NATO. #WeAreNATO #BerlinWall30 pic.twitter.com/ZMjLf6AX8N

Many factors contributed to the Soviet Union’s demise, but historians almost unanimously agree that the main force was the Vatican under Pope John Paul ii. “The nine days of John Paul ii in June 1979 were nine days on which the history of the 20th century turned in a dramatic way,” said historian George Weigel.

This dramatic turn led to the fall of the Berlin Wall and ultimately opened the way for Poland and many other former Eastern bloc nations—Romania, Bulgaria, Czech Republic, Estonia, Hungary, Latvia, Lithuania, Slovakia and Croatia—to join the European Union. The East and West were joined, just as Mr. Armstrong had said would happen.

To understand the Bible prophecies that underpinned Mr. Armstrong’s forecasts about Europe, enabling him to predict the Continent’s future with accuracy, order your free copy of Trumpet contributing editor Brad Macdonald’s book The Holy Roman Empire in Prophecy.