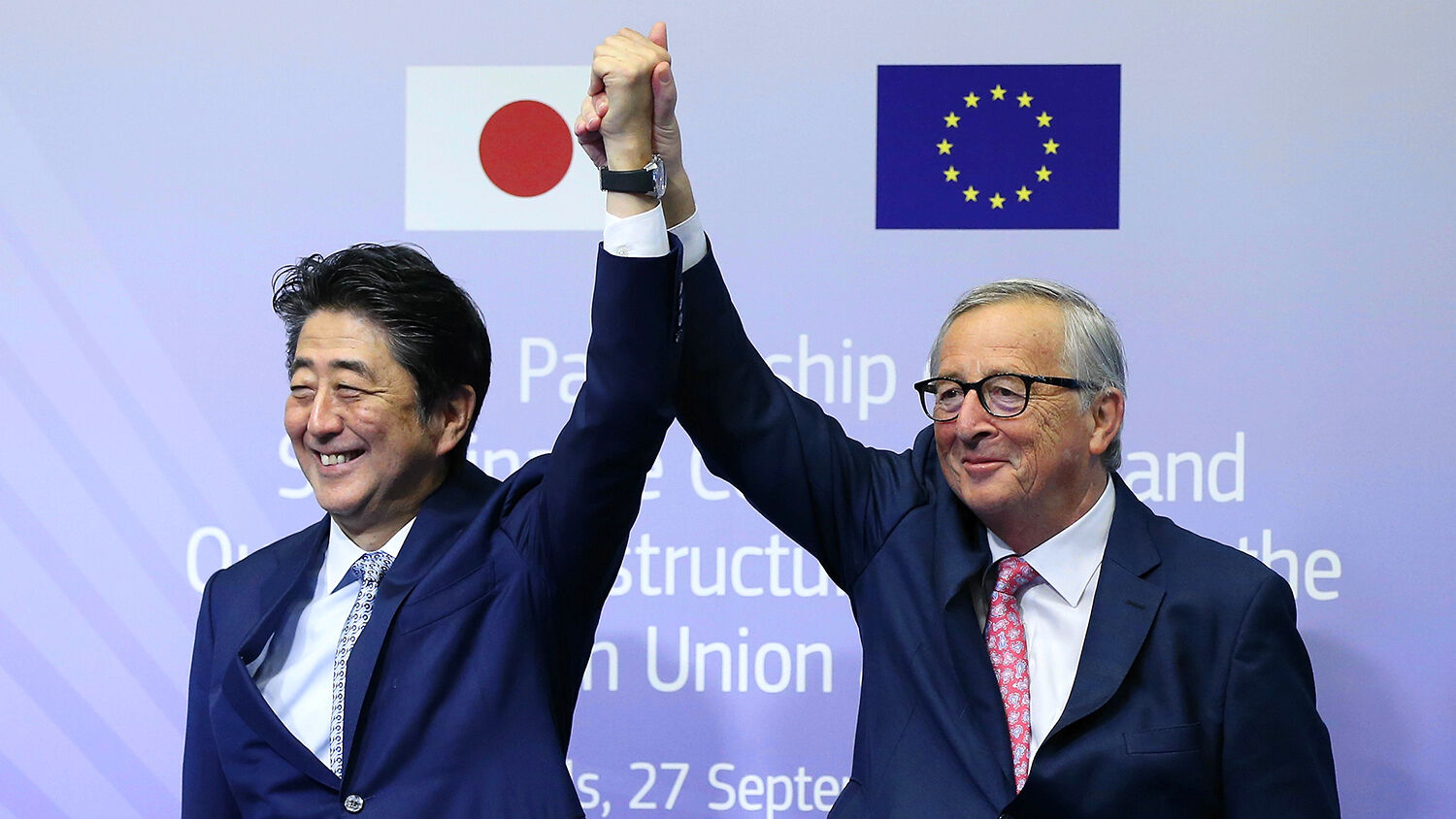 Japanese Prime Minister Shinzo Abe (left) and European Commission President Jean-Claude Juncker at the signing ceremony of the Partnership on Sustainable Connectivity and Quality Infrastructure between the European Union and Japan in Brussels, Belgium, on September 27
Dursun Aydemir/Anadolu Agency via Getty Images

The Diplomat published a report on October 3o titled “An Unexpected Ally: Japan’s Up-and-Coming Partnership With the EU.”

The piece calls attention to the Economic Partnership Agreement signed by Japan and the European Union in 2017, which is the world’s largest free-trade deal. It also covers the Strategic Partnership Agreement, a legally binding political deal that obligates Japan and Europe to cooperate on everything from promoting the rule of law and human rights worldwide to fighting nuclear proliferation and disease.

“With these two agreements,” the article states, “Japan and the EU proclaimed their alliance.” It goes on to detail a third landmark deal that Japanese Prime Minister Shinzō Abe and European Commission President Jean-Claude Junker signed on September 27. “The new agreement,” the Diplomat wrote, “contains everything left out from the previous two that might help accelerate connectivity.”

It is clear that Japan and the EU are bound together in an increasingly robust partnership. Although the Diplomat called this development “unexpected,” students of Bible prophecy have been anticipating it for some time.

Around 2,700 years ago, God inspired the Prophet Isaiah to write about a huge trade bloc that would be formed in our lifetimes. In Isaiah 23:3, he called it a “mart of nations.” Verse 1 names one of the leading countries in this international trade bloc: Tarshish, which is an ancient name the Scriptures sometimes uses for the people who make up modern-day Japan.

Trumpet editor in chief Gerald Flurry explains this in his booklet Isaiah’s End-Time Vision, which was last updated in 2016 before any of these major Japan-EU deals existed. Isaiah 23 names Tyre as another main power in this mart of nations. Mr. Flurry explains that this city represents “the commercial center” of modern Europe.

Isaiah 23, along with a companion passage in Ezekiel 27, shows that China and Russia will be among the others that will join this colossal “mart.”

To see Japan and Europe linked together in these ancient prophecies and then to see a new triple partnership binding the two modern nations together is remarkable. In today’s newspaper headlines, we are seeing the groundwork being laid for this mart of nations—prophesied of thousands of years ago—becoming a reality.

Even more remarkable is what the Bible shows this mart of nations will do in the years ahead.

Mr. Flurry continues: “The Bible contains many prophecies of that European power attacking America—and many other prophecies of America being besieged.” He then explains that this besiegement will be accomplished by the mart of nations. “China and the giants of Asia,” he writes, will form a “brief alliance” with the European bloc. “All of them are going to besiege America, Britain and the Jewish nation.”

Should Europe, the resurrected Holy Roman Empire, find a way to take advantage—even for a moment—of key resources and strategic holdings of China, Russia and Japan, it would have more than enough power to besiege the Anglo-Saxon nations. … This is why Isaiah’s prophecy of an end-time “mart of nations” that includes both European and Asian powers is so intriguing. And why the trend of collusion between these two great economic blocs is worth watching.

Developments between Japan and the EU today should not be unexpected. The trends we now see playing out are really confirming the prophecies of the Bible, and they show that a time of global calamity is drawing near. But Bible prophecy doesn’t stop there. It teaches that just beyond the formation of the “mart of nations,” and the economic siege of the United States and Britain, an era of peace will begin. Mr. Flurry writes: “[T]hat trading partnership won’t last long. Soon they will clash, just before Jesus Christ returns and destroys both of them.”

Christ will return to Earth, put an end to mankind’s self-destruction, and usher in an age of cooperation and peace and abundance for the whole world. “Thank God,” Mr. Flurry writes, “there is great news beyond the bad news.”

To understand more about the mart of nations and the time of peace that will come soon after, order your free copy of Mr. Flurry’s booklet Isaiah’s End-Time Vision.