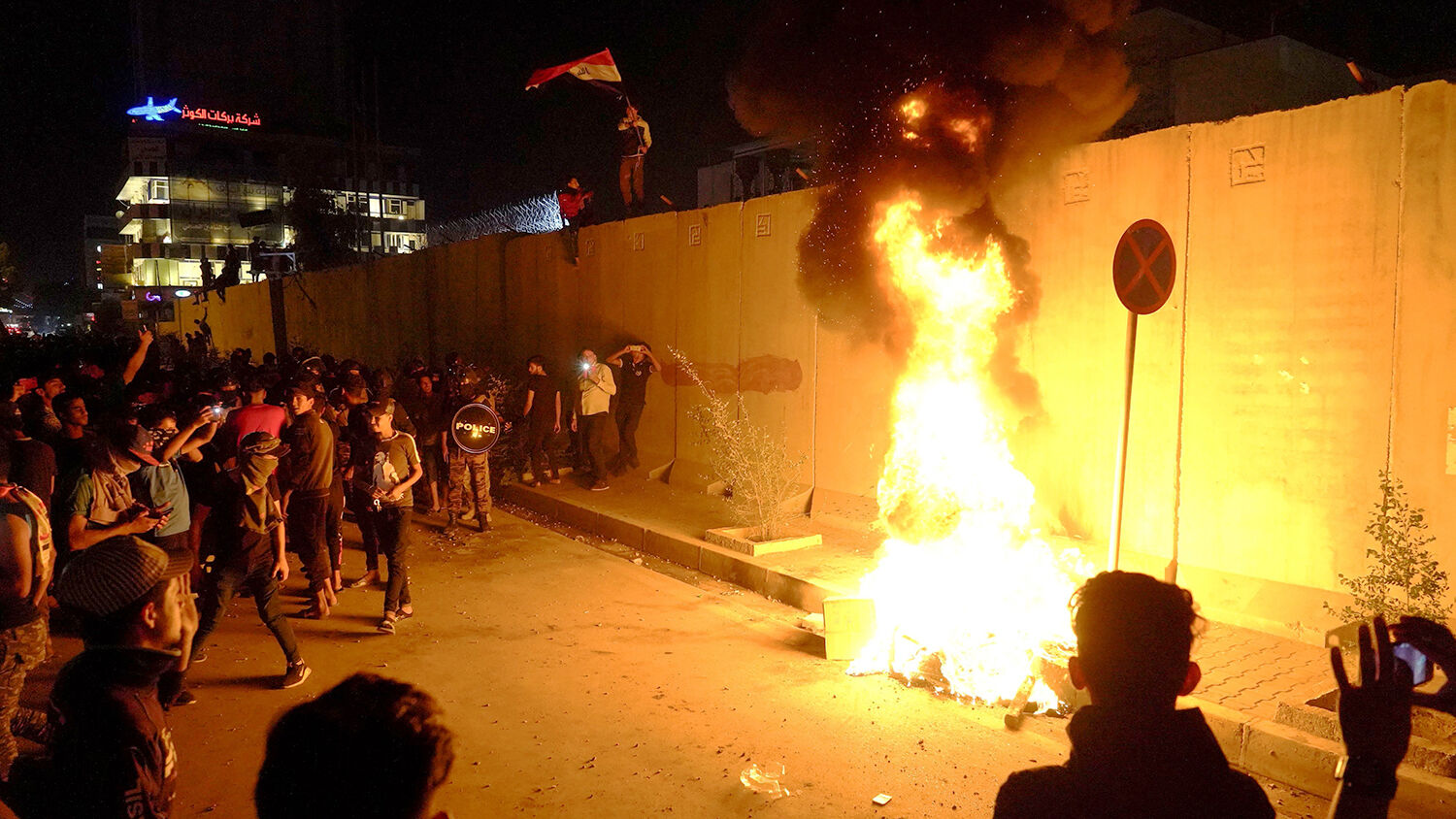 Iraqi demonstrators set tires ablaze behind the walls protecting the Iranian consulate in the Shiite Muslim shrine city of Karbala, south of Iraq’s capital Baghdad, during the night of November 3.
OHAMMED SAWAF/AFP via Getty Images

How the protests revealed Iran’s iron-fisted subjugation of Iraq.

On Sunday, Iraqis stormed the Iranian consulate in the Shiite holy city of Karbala, Iraq, scaling the compound’s concrete barriers and lobbing stones and firebombs at the building to protest Iran’s hold on the nation. As Iraq’s largest protests since the removal of Saddam Hussein in 2003 continue to intensify, Iranian leadership is becoming seriously concerned.

The Iranian consulate in the holy shrine city of Karbala. These scenes will be cause for deep concern in Tehran. pic.twitter.com/IqoTzCFAMV

Gathered outside the consulate, hundreds of protesters chanted, “Iran, get out; get out from Iraq,” as they burned Iranian flags and raised the Iraqi flag in its place. According to the Jerusalem Center for Public Affairs, protesters also trampled on pictures of Quds Force Cmdr. Qassem Suleimani. According to the Iran Primer news site, Iraqi security forces fired at protesters, resulting in three deaths and 19 injuries.

Similar protests also occurred in the southern port city of Basra. Iraqis shouting, “Stop the Persian occupation of Arab Iraq,” set the Iranian consulate ablaze. Iraq’s Foreign Ministry condemned the attacks, calling them a “red line that should not be crossed.”

‘What am I going to do after graduation? There are no jobs’.

Iraqi protesters have shut down major streets in Baghdad, increasing pressure on the gov’t to resign.

The string of protests began on October 1, when thousands of anti-government demonstrators gathered in Baghdad, Iraq’s capital, to express anger about unemployment, economic poverty and government corruption. Since they began, more than 250 people have been killed and more than 4,000 have been wounded.

In response to the protests, the Iraqi government has cut Internet access across much of the nation, deployed the Iraqi Army to subdue the protesters, and imposed an indefinite curfew.

Iraqi Prime Minister Adel Abdul Mahdi attempted to appease the mobs by promising them better economic conditions and various reforms. These promises fell flat, however, and the protests continued. Mahdi was about to give in and step down.

Suleimani flew into Baghdad on October 31 and told Mahdi not to step down. Instead, he demanded that the government use more force to put down the protests. “We in Iran know how to deal with protests,” Suleimani told Iraqi officials, according to Haaretz. “This happened in Iran, and we got it under control.”

According to the New Arab news site, the Iran-backed Popular Mobilization Units (pmu) have deployed snipers on rooftops to help quell the protests. The pmu is an Iraqi state organization comprised of about 50 majority Shiite militias that fought for Iraq against the Islamic State and were either trained or led by Islamic Revolutionary Guard Corps officers. Iraqi security sources revealed that “militiamen clad in black shot protesters on the third day of unrest,” a day that saw more than 50 people killed. More Suleimani-trained troops are expected to arrive if the Iraqi militias fail to put down the protests.

Iran is unwilling to lose control of Iraq because it is Iran’s most important base in the Middle East. Trade with Iraq, which reaches about $12 billion a year, is critical for allowing Iran to stay afloat while enduring United States sanctions. Iran also shares religious similarities with Iraq, as two thirds of Iraqis are Shiite Muslims.

Since the removal of former President Saddam Hussein, Iran has steadily gained more political power in Iraq. Through diplomacy and especially through the Popular Mobilization Units, Iran has infiltrated its way into the armed forces, the Iraqi parliament, top cabinet positions in the government, and even into having a hand in selecting the prime minister—who, by all appearances from last week’s meeting, is subject to Iran.

This is a trend the Trumpet has followed for decades. As far back as 1992, Trumpet editor in chief Gerald Flurry predicted that Iran would conquer Iraq. In 2003, Mr. Flurry asked the question in his headline for the Trumpet magazine: “Is Iraq About to Fall to Iran?” In that article, he wrote:

Now that Iraq has been taken out of the picture, Iran is even closer to becoming the reigning king of the Middle East. It may seem shocking, given the U.S. presence in the region right now, but prophecy indicates that, in pursuit of its goal, Iran will probably take over Iraq. At least, it will have a heavy influence over the Iraqi people.

Sixteen years later, this prediction stands more true than ever. Iran has literally stepped in and told the Iraqi prime minister what to do. Iran has taken over Iraq! And as the protests continue, Iran will likely exert even more heavy influence over the Iraqi people. Iran is becoming the reigning king of the Middle East.

Daniel 11:40 says, “And at the time of the end shall the king of the south push at him: and the king of the north shall come against him like a whirlwind, with chariots, and with horsemen, and with many ships; and he shall enter into the countries, and shall overflow and pass over.” This end-time prophecy, referring to the time just before the return of Jesus Christ, says that an Islamic group of nations, led by Iran, would rise up and push its way around the Middle East. Iran has pushed its way into Iraq and continues to do so.

In his free booklet The King of the South, Mr. Flurry proves radical Islam, led by Iran, is this prophesied power. In his booklet, he exposes Iran’s strategy to control the Middle East, its ultimate plan to conquer Jerusalem, its state-sponsored terrorism, flirtation with nuclear weaponry, and its push for control of world trade. Regarding Iran’s control of Iraq, Mr. Flurry writes (emphasis added):

Iran is working through standard political and diplomatic channels to position itself to be able to hold stock in the new Iraq, working with the Iraqi government, cementing economic ties, and exploiting other diplomatic channels.

Iran is the head of state-sponsored terrorism, and it is working with the Iraqi government to use that terror to squash the Iraqi protests. Iran subdues rebellion with brutality. In 2009, a string of protests flared up in Iran against government corruption. The resulting reaction by the Iranian government saw many heinous crimes, including the arrest, imprisonment, torture and rape of thousands of men, women and children, by the Islamic Revolutionary Guard Corps as the regime brought down its iron fist.

As the Iraqi protests continue, watch for Iran to continue to step in with even more brutality.