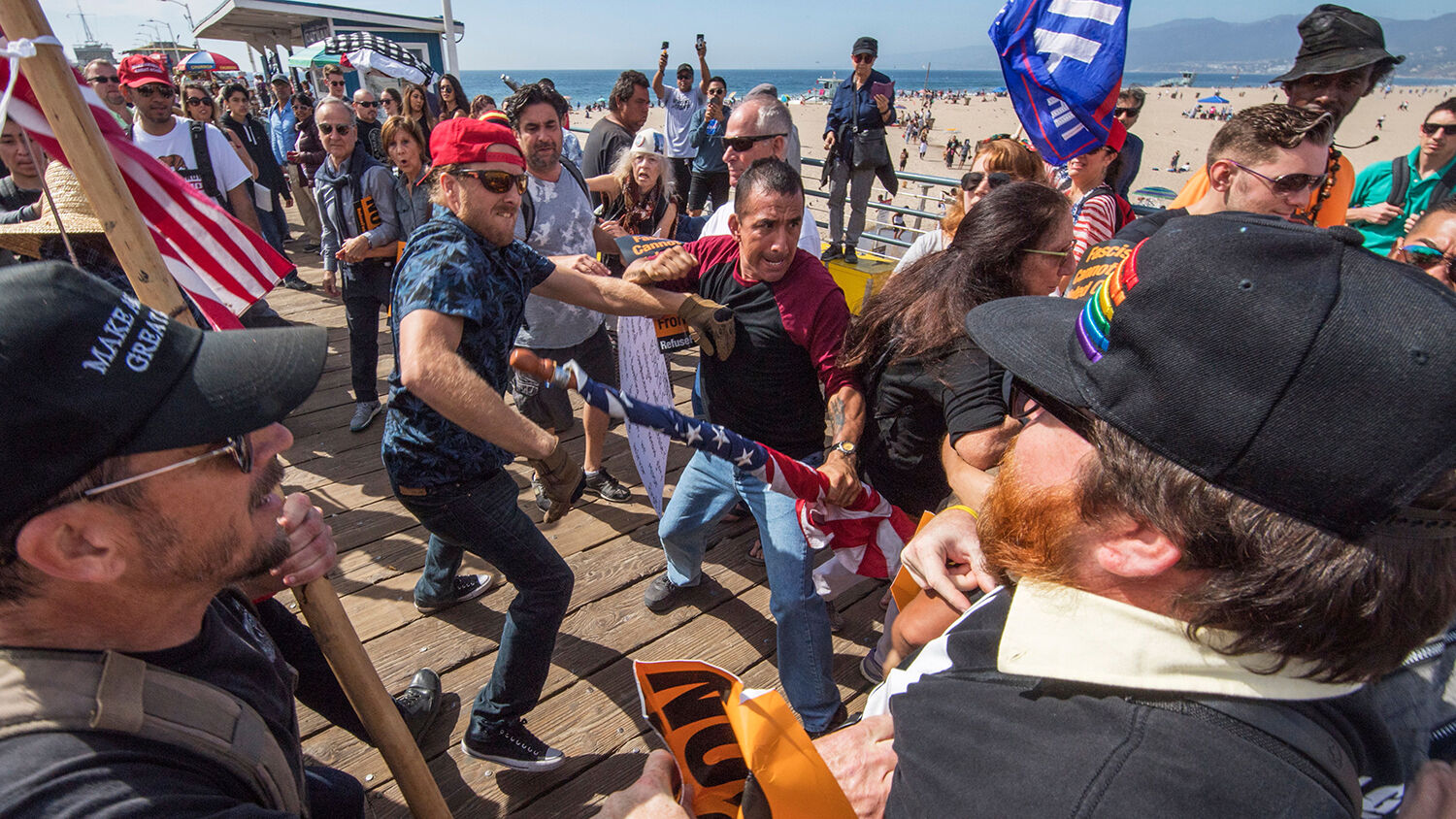 Supporters of President Trump clash with anti-Trump protesters during an October 19 rally against his policies in Santa Monica, California.
MARK RALSTON/AFP via Getty Images

A Georgetown University poll released on October 23 reports that 67 percent of Americans believe that America is “on the edge of civil war.” The partisan antipathy in the nation has reached an all-time high and, in the face of the upcoming 2020 presidential elections, will only get worse.

Battleground Civility Poll: 7-in-10 say political division is horrible. “The majority of Americans believe that we are two-thirds of the way to being on the edge of civil war. That to me is a very pessimistic place,” said @MoElleithee of @GUPolitics. https://t.co/2jib2Zpnpt pic.twitter.com/SPsrbnQg3Z

According to Mo Elleithee, executive director of Georgetown University’s Institute of Politics and Public Service, the results of this poll paint “a scenario, a picture of a highly negative campaign that will continue to exacerbate the incivility in our public discourse.”

Almost all Americans are aware of the growing division in the country, and now many realize that it is leading inexorably to a civil war. According to a survey by the Pew Research Center conducted among 9,895 adults, both Republicans and Democrats have increasingly colder sentiments about those in the opposing party. These sentiments have grown worse since the 2016 presidential election.

Fifty-five percent of Republicans say that Democrats are more immoral than other Americans, while 47 percent of Democrats say the same about Republicans; this is compared to 47 percent and 35 percent respectively, just three years ago. The numbers are the same in their view of the other’s closed-mindedness, intelligence, patriotism and laziness.

These poll results are worrying because they indicate less and less room for reconciliation and more and more room for antagonism. The poll results only serve to confirm what the Trumpet has been proclaiming for years: The divisions in America are leading to a bloody civil war.

In his article on the 2017 Charlottesville rioting, Trumpet editor in chief Gerald Flurry wrote:

On June 16, 1858, Abraham Lincoln said in a speech, “A house divided against itself cannot stand.” That was a direct quote from Jesus Christ that Lincoln applied to the very divided United States of America. …

Lincoln foresaw great peril for America. He knew it would take a crisis for the nation to learn that “a house divided against itself cannot stand.”

That crisis came. The tension and division in America in the middle of the 19th century erupted into a protracted, bloody conflict lasting more than four years. The Civil War cost 620,000 American lives—more deaths than all other American wars combined.The bitter division in America today is leading to another civil war that will be 10,000 times worse!”

The U.S. is deeply divided politically and idealogically. It is leading America to a violent and deadly outcome.

Tensions are brewing and about to boil over. The Bible prophesies violence, rioting and suffering on a level that America has never seen before. God inspired the Prophet Ezekiel to write, “Make a chain: for the land is full of bloody crimes, and the city is full of violence. … Destruction cometh; and they shall seek peace, and there shall be none” (Ezekiel 7:23, 25).

Unless mankind changes its course on fueling the divide in America, these hostilities will usher in the time of the worst suffering that man has ever seen on this Earth.

This suffering will be necessary to reconcile mankind to his Creator. Mr. Flurry wrote, “We can no longer ignore what we have reaped by giving ourselves over to sin. This is a reckoning! The good news, though, is that the destruction about to sweep over us is all for a purpose. It is precisely measured, and it is purposeful. It is preparing our people to come to know God!”

To learn more about the prophesied civil war and the inspiring future soon after, request a free copy of Mr. Flurry’s booklet America Under Attack.