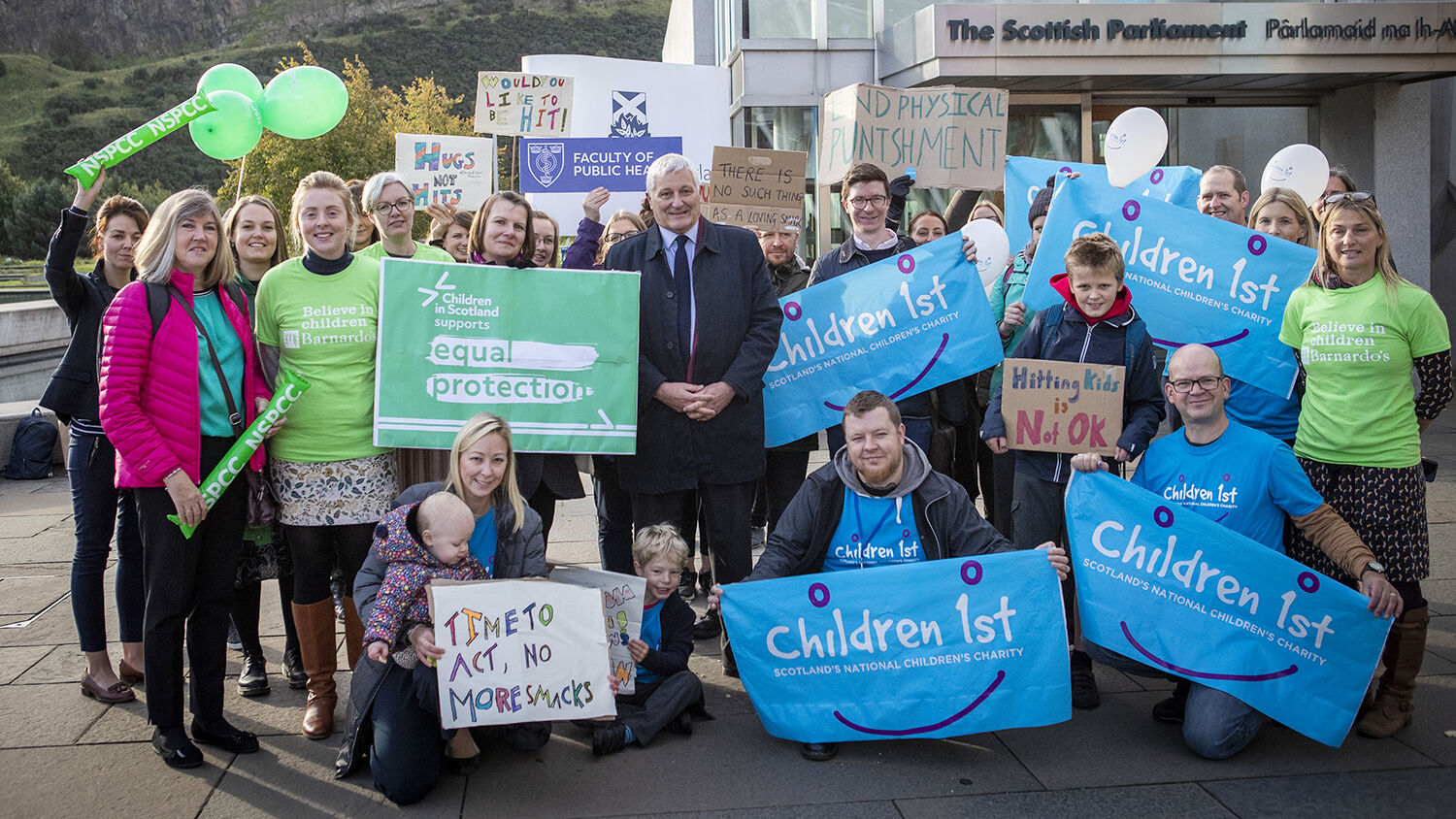 A rally is held outside the Scottish Parliament in Edinburgh in support of the Children (Equal Protection From Assault) Bill on October 3.
Jane Barlow/PA Images via Getty Images

A new law could land parents in unexpected legal trouble—but it will harm children most of all.

Scotland banned parents from physically punishing their children in a vote taken on October 3. Members of Parliament passed the Equal Protection Act, criminalizing corporal punishment under the same laws that govern assault between adults. In doing so, Scotland has outlawed a basic and vital parental right and is actually harming children.

Called “smacking” in the United Kingdom, spanking has been debated for several years in the Scottish Parliament. Members of Parliament voted 84 to 29 in favor of the new law, giving Scotland some of the strictest anti-spanking laws in the UK.

Green Party member John Finnie, who introduced the law, stated that “violence is never acceptable in any setting.”

Smacking children as a punishment is set to become a criminal offence in Scotland. MSPs will back a Bill later which will give children equal protection from assault. It’s been proposed by Green MSP @JohnFinnieHI pic.twitter.com/4m46V4E5Cl

Is disciplinary spanking a form of violence?

Some disagree with the new law. A Conservative lawmaker called the bill “imprecise” and warned that parents could easily find themselves in unforeseen legal trouble as a result.

Brendon O’Neil, editor of Spiked magazine, called the Scottish National Party’s decision an assault on individual freedom. He said it is “yet another expression of the [politically correct] middle classes’ arrogant presumption that they know better than the rest of us how children should be brought up and how households should be run.”

Different groups harbor strongly differing views on this vital issue of child rearing. But what does God say? Is spanking violent and harmful to children? If done out of anger and with excessive force, it can be. But done correctly, it can benefit a child for the rest of his or her life.

When Scotland’s plans to ban spanking were still in their infancy, Trumpet contributor Dennis Leap wrote an article titled “Not Spanking Shows a Lack of Love.” In it, he showed that spanking exists, not as a form of abuse, but as a way to save children from making harmful choices in the future. He wrote: “The first and most important part of effective child rearing is showing deep love for a child. The second part is educating that child in love. The third part is disciplining in love. Effective child rearing requires discipline, which should include spanking.”

God’s view on this subject is plainly spelled out in many scriptures, though few believe it. God endorses spanking out of love for children, not out of anger. “He who spares the rod hates his son, but he who loves him is diligent to discipline him” (Proverbs 13:24; Revised Standard Version). Why is it more loving to spank a child than to merely talk to him? Proverbs 22:15 answers: “Foolishness is bound in the heart of a child; but the rod of correction shall drive it far from him.”

Humans do not know how to direct their steps, or make the right choices, without direction from God (Jeremiah 10:23). Left to themselves, children will not know what is right and wrong, or even what is physically dangerous. Spanking should be used to reinforce those lessons and help children grow into wise adults.

God inspired the Apostle Paul to compare spiritual correction to the act of a father spanking his son: “For whom the Lord loveth he chasteneth, and scourgeth every son whom he receiveth” (Hebrews 12:6). Would God have included this analogy in His inspired Word if spanking was outdated or harmful?

Note this clear explanation in our free book Child Rearing With Vision:

Spanking the right way means spanking a child out of loving discipline and loving chastisement, not out of anger or frustration! It means spanking for long-term results in character, not short-term relief in forcing a child to stop doing something you find annoying. It means spanking for disobedience and rebellion, not for making childhood mistakes without knowing any better. It means remaining calm, being firm, informing the child of the disobedience or rebellion that necessitated the spanking, and giving him or her an appropriate number of swats on the behind where it will not injure but will sting enough to instantly attract the child’s full attention! This type of corporal punishment gets a child’s attention, demonstrates that sinful actions result in immediate and painful consequences, and saves the child, if he responds correctly, from much worse, self-destructive consequences.

There is a right way and a wrong way to spank. Discipline must always be administered in love. But by criminalizing spanking, Scotland is infringing on the rights of parents. And it is discouraging a form of discipline that could save many children from much greater frustration and pain in the long run.

To understand how you can bring balanced and effective discipline into your family, reaping the benefits of raising children God’s way, request your free copy of Child Rearing With Vision.