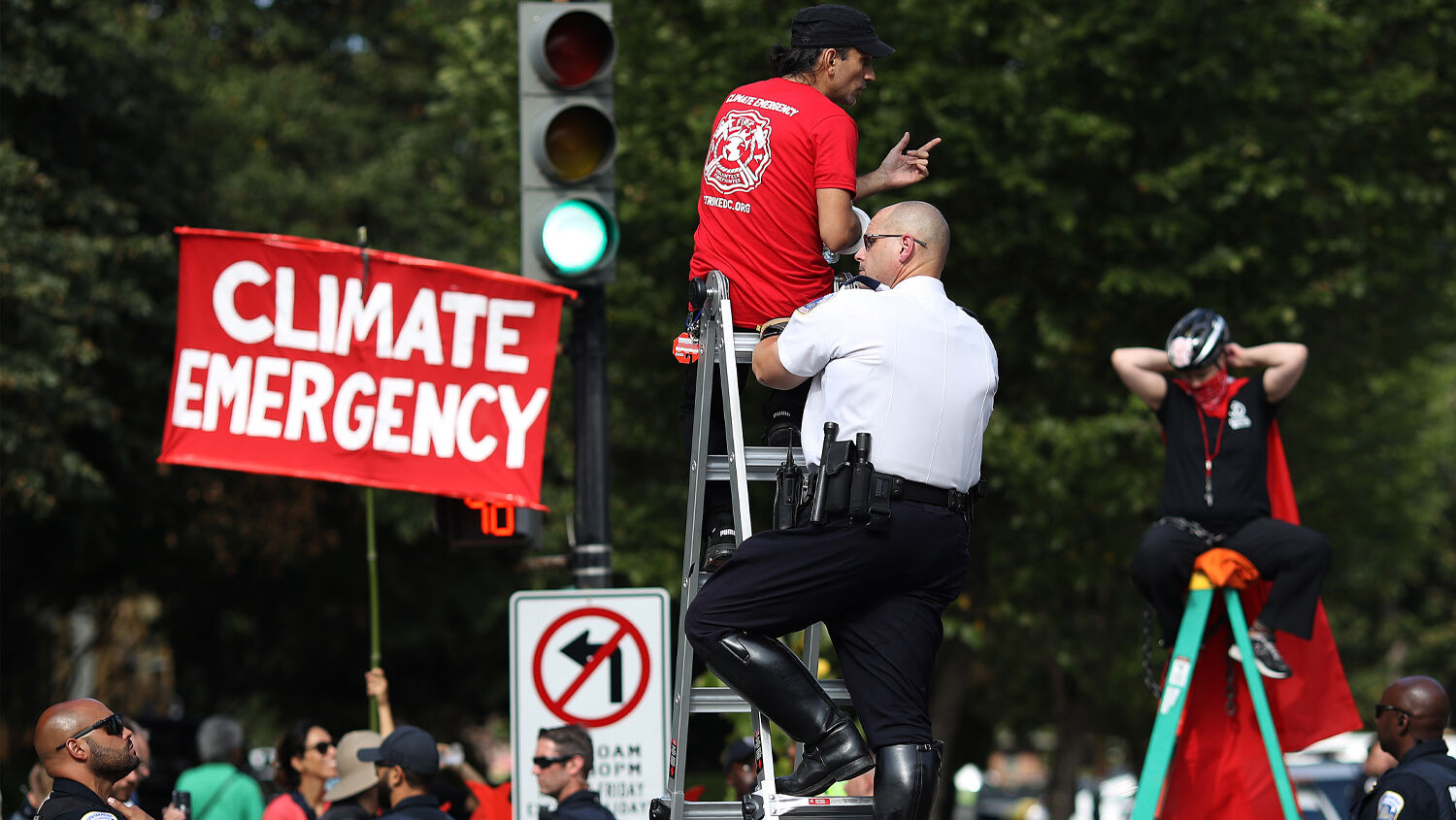 WASHINGTON, DC - SEPTEMBER 23: A policeman climbs atop a ladder to talk with one of the protesters advocating for new policies to combat global climate change as activists close an intersection September 23, 2019 in Washington, DC.
Getty Images

A coalition of climate change activists took to the streets of Washington, D.C., on September 23 to “shut down” the city. Among these organizations were Extinction Rebellion and Black Lives Matter. While they did not succeed in a total shutdown, the protesters did succeed in blocking traffic at major intersections, forcing cars to sit idle for hours. They also threw trash in the streets and lit dumpster fires.

The protests were timed to coincide with a speech by 16-year-old climate activist Greta Thunberg at the United Nations Secretariat Building in New York City. “You have stolen my dreams and my childhood with your empty words,” Greta told UN representatives. “And yet I’m one of the lucky ones. People are suffering. People are dying. Entire ecosystems are collapsing. We are in the beginning of a mass extinction, and all you can talk about is money and fairy tales of eternal economic growth. How dare you!”

”People are suffering, people are dying, entire ecosystems are collapsing. We are in the beginning of a mass extinction and all you can talk about is money and fairytales of eternal economic growth.” Watch Greta Thunberg speak at the UN Monday morning. https://t.co/Akkxm9sXdr pic.twitter.com/ahHKlhbYaE

Both Greta Thunberg and the Shut Down D.C. group are pushing socialism (i.e. government control over the economy and individual activity) as the only way to stop an apocalyptic mass extinction. Shut Down D.C. openly touts its partnership with the Democratic Socialists of America. And it demands the implementation of the Green New Deal, a proposed program that purposes to fight global warming by totally eliminating fossil-fuel-powered electricity, closing every coal and natural gas power plant in the nation, and transitioning the U.S. economy to 100 percent renewable energy by 2030.

Capitalism is killing the planet apparently. Time for socialism I guess pic.twitter.com/wcDj6XxYcZ

One of the banners at the climate change protest read, “Capitalism Is Killing the Planet.” This sentiment echoes an article published earlier this year in the Guardian Unlimited: “Ending Climate Change Requires the End of Capitalism. Have We Got the Stomach for It?”

Some climate alarmists may sincerely believe that America has to abandon free-market economics to save the world from an environmental catastrophe. But many of the environmental policies that these would-be central planners are proposing would be worse for the planet than the problems they purport to solve.

A report published by the Heartland Institute in March 2018 states: “Climate modelers ignore the fact that the heating effects of CO2 are not linear. This means that whatever impact the near doubling of CO2 has had during the past two centuries, it will have dramatically less impact with the next doubling …. Indeed, the first 20 ppm of CO2 added produces more warming than the next 400 ppm. This saturation effect means that nearly all the warming potential of CO2 has been realized at concentrations in the atmosphere of less than 100 ppm.”

Additionally, many of the programs being pushed by climate change alarmists would do serious harm to the environment in their misguided efforts to reduce greenhouse gas emissions. For example, two common proposals to hit climate change are that the government should tax meat consumption to discourage people from raising cows (which belch methane), and the government should use taxpayer dollars to subsidize the manufacture of electronic cars.

Grasslands around the world are turning to desert because grazing animals are not fertilizing the soil in these ecosystems. Since overhunting has killed most of the bison, wildebeests, zebra and other wild animals that once grazed these grasslands, cattle and domestic ungulates are necessary to keep these ecosystems healthy. Taxing meat production would seriously hurt world soil health.

Electronic cars rely on battery systems made with rare earth minerals. The wastewater produced by the processing of these heavy metals is arguably worse for the environment than the exhaust produced by internal combustion engines. Subsidizing electronic cars may increase world water pollution.

These are facts you do not hear from Greta Thunberg and the alarmists demanding that the world abandon capitalism. Whether these people are legitimately deceived or whether they have an agenda, this radical environmentalist movement is not really about the environment. It is about destroying the United States.

The Green New Deal would transform America into a Venezuela-style socialist state by nationalizing the energy industry and the health-care industry in the name of environmentalism.

Climate change has become something like a religion for the radical left. They believe it as an article of faith regardless of the evidence. It is a tool they are using to increase their control. … The weaker America is, the more vulnerable it becomes to being controlled. That is exactly what the radical left wants. It is using the issue of the environment in order to get it. The Obama administration didn’t want to get climate change under control; it wanted to get America under its control! Proponents of deals like this want to control the world.

Mr. Flurry then pointed out that this type of thinking is satanic. Mankind should be good stewards of this beautiful planet, but there is an evil spirit behind this effort to control and weaken America. (Request Mr. Flurry’s free booklet America Under Attack, which explains this little-understood reality.)

Greta Thunberg and the people blocking traffic in Washington, D.C., are emotionally distorting scientific facts to push an agenda. The devil broadcasts in moods and impulses (Ephesians 2:2). If you are controlled by your feelings, the devil will use that to accomplish his purposes.

The Prophet Isaiah wrote that in the end time, Israel would become sick in its reasoning: “Ah sinful nation, a people laden with iniquity, a seed of evildoers, children that are corrupters: they have forsaken the Lord, they have provoked the Holy One of Israel unto anger, they are gone away backward. Why should ye be stricken any more? Ye will revolt more and more: the whole head is sick, and the whole heart faint. From the sole of the foot even unto the head there is no soundness in it; but wounds, and bruises, and putrifying sores: they have not been closed, neither bound up, neither mollified with ointment. Your country is desolate, your cities are burned with fire: your land, strangers devour it in your presence, and it is desolate, as overthrown by strangers” (Isaiah 1:4-7).

This is a prophecy about America being laid desolate by civil war. (This truth is expounded on in Herbert W. Armstrong’s free book The United States and Britain in Prophecy.)

How could the most powerful and prosperous nation in human history fall into such a terrible fate? One major area America will clash over internally is governmental control.

Today, socialism is gathering strength. What people don’t understand about “democratic socialism” is that the aim of socialism in the U.S. is to overthrow its constitutional form of government—by violence if necessary.

Socialists often downplay this, but the proposed Green New Deal is not really about protecting America; it is about destroying America’s constitutional system of government. How widespread and violent will this destructive movement get? The history of socialism—and Bible prophecy—provide the chilling answer.

To learn more about how prophecies from Isaiah and other biblical books apply to America, read “Communism in America Today,” by Gerald Flurry.