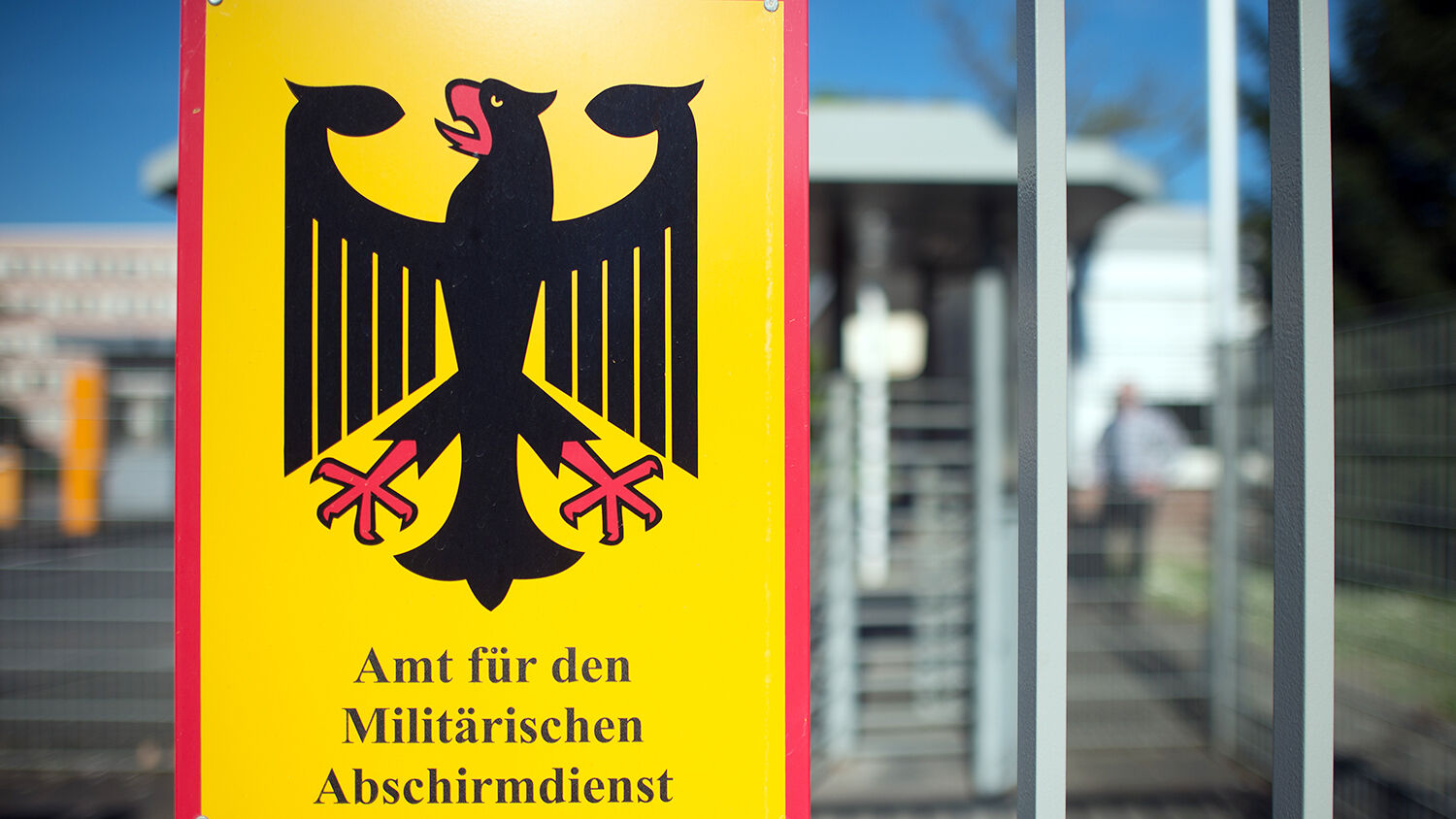 The insignia for the German Office of the Military Counterintelligence Service can be seen on a fence of the Konrad Adenauer-Barracks in Cologne, Germany.
Federico Gambarini/Picture Alliance via Getty Images

Investigators’ sympathy has hindered the investigation for years.

Green Party politician and member of the Intelligence Control Panel Konstantin von Notz inquired how many members of the elite unit are being monitored for possible right-wing tendencies. In response, the federal ministry declared that cases are not specified according to military unit. “The evasive answer is surprising,” Spiegel Online wrote on September 18. “For weeks, security circles have been circulating fairly accurate figures concerning over two dozen suspected cases within the [Elite Unit Special Forces].”

The Military Counterintelligence Service only investigates if there are serious grounds that indicate soldiers may hold right-wing and anti-constitutional worldviews. Depending on the severity of the cases, soldiers are either dismissed or subject to disciplinary penalties, which rarely happens, as recent revelations have shown.

Schlatmann complained that the Military Counterintelligence Service was too lenient and failed to cooperate with the office of constitutional protection. In several cases, right-wing extremists who have been dismissed from the Bundeswehr have not faced further surveillance. Der Spiegel reported:

The special investigator found even more. Schlatmann got the impression from the files that the soldiers employed at the [counterintelligence service] often did not do thorough research because they wanted to spare their comrades in the troop. Others were all too easily appeased with excuses.

In previous years, the [Military Counterintelligence Service] failed to use technological resources to monitor phone calls and e-mails.

Hoofe began reforming the investigations in 2017, following the revelation of underground right-wing extremist networks in the Army. But the recent criticism has added more urgency.

Later this year, Schlatmann plans to submit his final report of several hundred pages to the supervisory board. But as Der Spiegel noted, the document will be classified as secret. The opposition hopes that at least a summary will be made public.

In 2017, right-wing extremist Lt. Franco A.’s double life was exposed. He posed as a Syrian refugee and intended to carry out a terrorist attack in Germany that he would blame on his fabricated Syrian alter ego. Although his superiors knew about his extremist views since 2014, he was allowed to continue serving in the Army.

But it turned out Franco A. wasn’t alone. Investigations have since revealed the possibility of an underground network within the Army that is planning for “Day X,” when Germany’s government will lose control and the Army will take over.

German Defense Minister Ursula von der Leyen spoke on this issue on May 7, 2017: “To shine light in the dark fields will be laborious. It will hurt; it will not be pleasant. We will have to endure through it; it will require much time. The process will take weeks and months, but it is for the best in the Bundeswehr.”

During her swearing-in ceremony, Germany’s Defense Minister Annegret Kramp-Karrenbauer made it clear that, “The Bundeswehr has no place for extremists”. pic.twitter.com/Bfdnl9Rr9x

Swastikas and other Nazi objects have been found in Bundeswehr facilities. It has been revealed that soldiers of various ranks admire Hitler’s Wehrmacht. Von der Leyen said on April 30, 2017, in zdf: “The German Army has an attitude problem, and apparently, weak leadership at different levels.”

Ever since voicing suspicion, von der Leyen has faced much resistance within the Army. She was pressured to apologize for her comments. She was heavily criticized for neglecting to provide the Army with necessary equipment. As this criticism mounted and other allegations arose, it was suggested that von der Leyen leave the ministry and, instead, become president of the European Commission.

To this day, the primary focus of Germany’s media, public and politics has been on the shortcomings of the Army. While completely exposing its dark side has been somewhat neglected, we have still received a glimpse into existing right-wing extremism in the Army that proves crucial to Bible prophecy. Late theologian Herbert W. Armstrong wrote in the September 1948 Plain Truth:

Are we now seeing the reemergence of this underground movement? Germany’s Alternative für Deutschland party is demanding the restoration of Germany’s army. It enjoys the support of the police and army more than any other political party.

At the same time, we are also seeing the reemergence of Nazi ideologies. Certainly not every soldier is a Nazi, but Nazis have been in the Army since its founding. This truth is made plain and illustrated with numerous facts and recent revelations in our booklet Germany and the Holy Roman Empire (free upon request).

Germany’s underground Nazi movement has been exposed, but it hasn’t been dealt with.

Mr. Armstrong’s warning is more urgent today than ever. We are about to see the reemergence of German military strength. The world will likely celebrate this, encouraging Germany to take more responsibility in Europe and crisis zones around the world. This is exactly what high-ranking German officers and elite want.

But Mr. Armstrong warned that it will be this reemerging empire that will again throw the world into an all-out war. This time, it will be worse than ever before.

The Bible that informed Mr. Armstrong’s prediction reveals: “The beast that thou sawest was, and is not; and shall ascend out of the bottomless pit, and go into perdition: and they that dwell on the earth shall wonder, whose names were not written in the book of life from the foundation of the world, when they behold the beast that was, and is not, and yet is” (Revelation 17:8).

The beast refers to a German-led empire that has murdered millions in the past and will be responsible for the death of billions more. But even more important than understanding the identity of the beast is to understand the God who prophesied the beast would reemerge. This understanding is the only hope that mankind has in a coming nuclear holocaust.

Now is the time to wake up, watch Germany’s military rise, and study what God has to say about it. Request your free copy of our booklet He Was Right to understand various Bible prophecies that explain our world today as God revealed them to Mr. Armstrong.