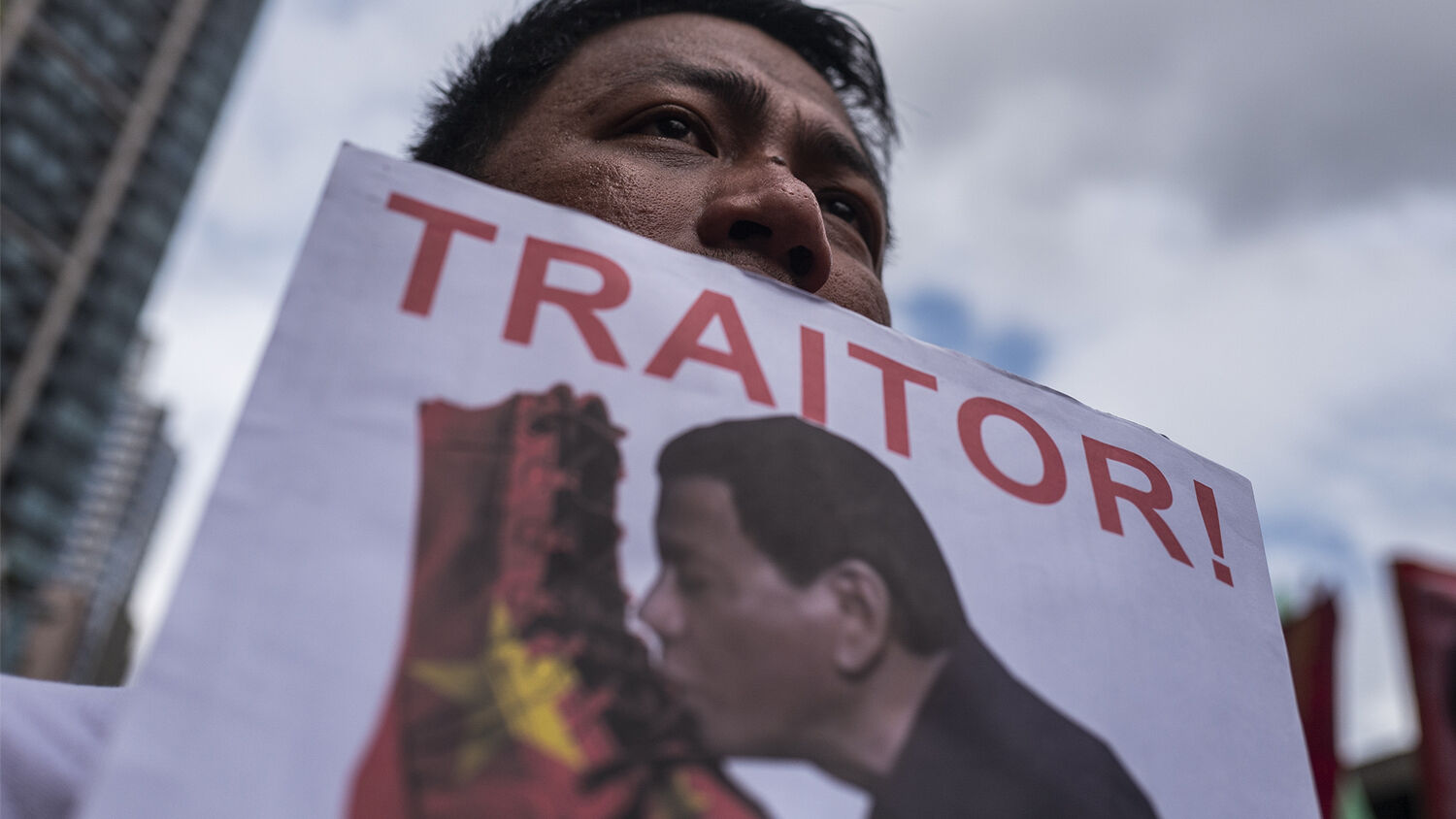 Filipino protesters with Philippine flags march toward the Chinese Consulate on April 9 in the business district of Makati, Philippines.
Jes Aznar/Getty Images

As the pillars of the U.S.-led global order continue to weaken, Asian states will increasingly succumb to Chinese intimidation.

Philippine President Rodrigo Duterte said on September 9 that the Philippines would undertake a joint deal with China to extract oil and gas from Reed Bank, a region of the South China Sea that lies in the Philippine Exclusive Economic Zone.

The International Court of Justice in The Hague ruled in 2016 against China’s claims of ownership over Reed Bank, saying it lies within Philippine waters. The court also ruled against China’s claims of nearly all the rest of the South China Sea, portions of which are claimed by Brunei, Indonesia, Malaysia, the Philippines, Taiwan and Vietnam. China unsurprisingly rejected the ruling. And Duterte, who had become president just days before the long-awaited decision, remained mainly silent about it. The Trumpet noted at the time that his decision not to embrace the win “may signal that, under Duterte, the Philippines will be more submissive to China.”

Now Duterte says Chinese President Xi Jinping agreed to give the Philippines a majority stake in the exploration venture if it would ignore the 2016 ruling. “Set aside the arbitral ruling,” Duterte told reporters, paraphrasing what Xi had told him. “Set aside your claim. Then allow everybody connected with the Chinese companies. They want to explore and if there is something, they said, we would be gracious enough to give you 60 percent; only 40 percent will be theirs. That is the promise of Xi Jinping.”

Xi was quoted by Chinese media as saying, “As long as the two sides handle the South China Sea issue properly, the atmosphere of bilateral ties will be sound, the foundation of the relationship will be stable, and regional peace and stability will have an important guarantee.”

So China agreed to a minority stake in the deal. But its primary goal in the agreement is not to obtain hydrocarbons but to coerce nations of the South China Sea to implicitly recognize China’s claims over the region. A third of the world’s maritime commerce passes through the South China Sea, and Beijing is bent on controlling the region. As part of those efforts, China has blocked several Philippine attempts in recent years to partner with other countries to extract oil and gas from Reed Bank. And now by inking a deal for Beijing to move in, Duterte has bolstered China’s ludicrous and illegitimate claims to the Philippines’ own territory.

Duterte was in an unenviable spot, forced to either leave sorely needed gas and oil untapped, or kowtow to China. But he has made a worrying decision. And as the pillars of the United States-led global order continue to weaken, we should expect the Philippines and other less powerful nations to increasingly succumb to Chinese intimidation.

Trumpet editor in chief Gerald Flurry wrote in 2016 that China’s takeover of the strategic South China Sea and its bullying of less powerful regional states “is steering the world toward war.”

Since Japan’s defeat in World War ii, America has protected this vital trade route and brought peace to this part of the world. Now the American military is retreating, and other great powers are coming in to fill the vacuum. … China is intimidating the nations of Southeast Asia into submission to its will. … Everything is headed in the direction of war.

Mr. Flurry’s understanding of the South China Sea situation and what it will lead to is founded on Bible prophecy.

In Deuteronomy 28:52, God cautions the modern nations that descended from ancient Israel that if they reject Him and His law, He will give control over the world’s strategic sea “gates”—such as those accessing the South China Sea—to their enemies. He warns that these enemy powers will weaponize that control and eventually besiege the nations of Israel: “And he shall besiege thee in all thy gates, until thy high and fenced walls come down, wherein thou trustedst, throughout all thy land ….”

Mr. Flurry explained that this warning was not intended for the ancient Israelites under Moses, but for two modern countries primarily. He wrote: “It is a prophecy for the modern-day descendants of Israel. Two nations in particular represent Israel in this end time: America and Britain.”

These two countries “are full of terrible sins today, and God is going to correct them for that!” he wrote. “This prophecy and several others show that He will send foreign enemies to punish America and Britain!” (For proof that America and Britain descended from ancient Israel, read The United States and Britain in Prophecy, by Herbert W. Armstrong.)

China’s bullying of the Philippines and China’s general takeover of this strategic maritime region show that this prophecy in Deuteronomy is in the process of being fulfilled.

Mr. Flurry emphasized that we must vigilantly watch the developments leading to the prophesied besiegement. He also stressed that as alarming as the future destruction is, these developments now taking place are intimately tied to the best news we could possible hear:

He continued: “Yes, there is a lot of bad news when you consider what it takes to get people to the point of knowing God. But ultimately, the outcome is spectacularly good news!”