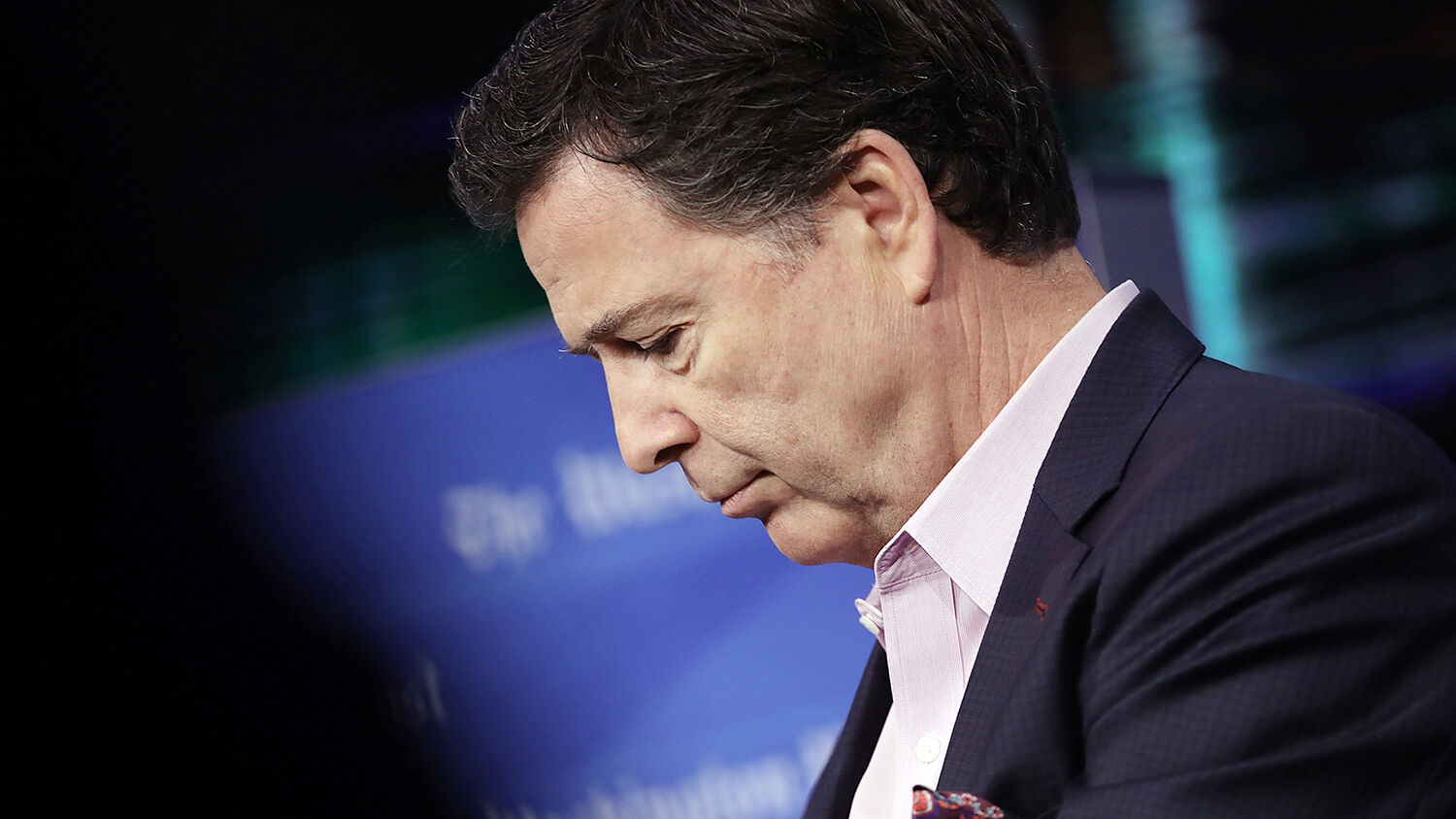 Former fbi director James Comey answers questions during an interview forum at the Washington Post on May 8, 2018, in Washington, D.C.
Photo by Win McNamee/Getty Images

Former Federal Bureau of Investigation director James Comey thought he was the hero who would save America from United States President Donald Trump. Comey’s defense for violating fbi protocol, as the latest Inspector General’s report concluded, was that he viewed the situation as one of “incredible importance to the nation.”

Mr. Comey saw the incoming president as a grave threat to America. He told the inspector general that his action was “something I [had] to do if I love this country … and I love the Department of Justice, and I love the fbi.”

Apparently Mr. Comey’s deep love for America and the fbi meant that he should be excused for violating the rules of the fbi.

Yet again, rogue FBI Director James Comey was found to believe the rules just didn’t apply to him.

DOJ IG: “However, Comey’s own, personal conception of what was necessary was not an appropriate basis for ignoring the policies and agreements governing the use of FBI records” pic.twitter.com/s7Ezz3Kvrg

But Inspector General Michael Horowitz didn’t buy it. His report says, “Comey set a dangerous example for the over 35,000 current fbi employees.”

The 79-page report focused on Comey’s handling of memos that he made of his interactions with President Trump. The report found that Comey’s “retention, handling and dissemination of certain memos violated Department and fbi policies, and his fbi Employment Agreement.”

Comey, through one of his lawyers, leaked the content of his memos to the New York Times with the goal of triggering a special counsel.

On May 16, 2017, the New York Times editorial board published an article built on Comey’s fourth memo, titled “Did Mr. Trump Obstruct Justice?”

Comey said his memos were “personal” recordings of his interactions with Mr. Trump—an inexcusable excuse for someone as high-ranking as fbi director.

The report reads: “Comey’s characterization of the memos as personal records finds no support in the law and is wholly incompatible with the plain language of the statutes, regulations and policies defining federal records, and the terms of Comey’s fbi Employment Agreement” (emphasis added throughout).

The inspector general wrote, “Comey’s own, personal conception of what was necessary was not an appropriate basis for ignoring the policies and agreements governing the use of fbi records, especially given the other lawful and appropriate actions he could have taken to achieve his desired end.”

Mr. Comey’s behavior was also hypocritical. On March 20, 2017, while testifying before the House Permanent Select Committee on Intelligence, Comey said the fbi had to be very careful about how it handled information while investigations were still open: “We need to protect people’s privacy. … We just cannot do our work well or fairly if we start talking about it while we’re doing it.”

Comey’s fourth memo, the one he leaked to the New York Times in hopes of triggering a special counsel, contained information about an ongoing investigation into President Trump’s former national security adviser Michael Flynn.

Comey’s rationale is that the fbi doesn’t need to be “fair” and concerned about protecting people’s privacy if it has to do with investigating anyone in Donald Trump’s orbit.

As blistering as the report of Comey’s behavior was, the Department of Justice declined to indict him. But there are still two more reports to come that concern the former fbi director, so he’s not in the clear yet.

This latest report exposes much about the dangerous and lawless thinking of members of the Obama administration’s “deep state.”

Comey thought his personal goal was so important that he could violate the rules without being punished.

Comey said he was compelled to take these actions “if I love this country … and I love the Department of Justice, and I love the fbi.” However, were current or former fbi employees to follow the former director’s example and disclose sensitive information in service of their own strongly held personal convictions, the fbi would be unable to dispatch its law enforcement duties properly ….

In other words, if everyone in law enforcement behaved like James Comey, then the rule of law would be a meaningless platitude. Comey was ruled by his personal convictions, the report found. Comey was not ruled by the law.

The report continued: “In a country built on the rule of law, it is of utmost importance that all fbi employees adhere to Department and fbi policies, particularly when confronted by what appear to be extraordinary circumstances or compelling personal convictions.”

Despite the humiliating report, Comey took to Twitter, demanding an apology from his critics: “I don’t need a public apology from those who defamed me, but a quick message with a ‘Sorry we lied about you’ would be nice.”

How do you explain the thinking of men like this? Comey had a 79-page report laid out in front of him explaining in detail what he did wrong, and his first response is that he deserves an apology. This was the director of the Federal Bureau of Investigation. And he would likely still be the director if Hillary Clinton had won the 2016 presidential election.

In his May-June 2018 Trumpet cover story, “Saving America From the Radical Left—Temporarily,” Gerald Flurry wrote that “we are getting a hard look at just what the radical left is willing to do in order to seize power and stay in power.”

Mr. Comey wasn’t simply acting according to his own personal convictions. He was part of a coordinated conspiracy aimed at undermining and ultimately bringing down the presidency of Donald Trump.

There’s plenty of evidence that suggests Comey was acting at the direction of men like Central Intelligence Agency director John Brennan and Director of National Intelligence James Clapper. These men were answering to Barack Obama in the lead-up to inauguration day on Jan. 20, 2017.

Mr. Flurry wrote that the radical left has “no respect for the rule of law! They believe they are above the law. It is no exaggeration to say that such contempt for the nation’s founding principles is a threat to the republic!”

Comey thought he was above fbi protocol. He thought the rules did not apply to him. The Inspector General’s report said that if every fbi employee behaved that way “the fbi would be unable to dispatch its law enforcement duties properly.” It cannot function if people break the rules according to their own will. The same is true of any department and of the nation as a whole.

Mr. Flurry wrote: “Had Hillary Clinton been elected, the destructive trends that unfolded during the Obama presidency would have continued unchecked, and they surely would have intensified.”

Had it not been for Donald Trump’s victory, we wouldn’t know anything about this! Men like Mr. Comey operated at the highest levels of government. And they were guided by a lawless philosophy. Mr. Flurry continued: “[T]he radical left is relentlessly waging war against the president and leading this country to its destruction! And it was only Mr. Trump’s election that prevented even worse troubles from bringing this nation down even more quickly.”

What would have happened if Hillary Clinton had won? Mr. Flurry said he believes “it would have meant an end to our constitutional republic!”

Some people might think that statement is overly dramatic, but it has been bolstered even more so by the corruption of the former administration that is being exposed on a weekly basis. There’s a dimension behind all of these events that is missed by most people. Mr Flurry wrote:

You need to understand the real reasons why America has been the greatest nation in history. No man can “make America great again”—certainly not if he is ignorant of the fact that it was God who made it great, and ignorant about why He did so!

This evil spiritual power is influencing the radical left! Most Republicans don’t realize what they are dealing with: people who are absolutely committed to destroying the government of this land!

Bible prophecy describes the time leading up to the election of Donald Trump as a time of “affliction.” But God saved America—albeit temporarily—from this affliction by the hand of an end-time Jeroboam (2 Kings 14:26-27). You can even see that temporary saving in the recent Inspector General’s report.

To learn more about the deep state in the United States, read “Is the ‘Deep State’ Real?” And for further information on how how God is temporarily using the Trump administration to save America, read Mr. Flurry’s “Saving America From the Radical Left—Temporarily.”