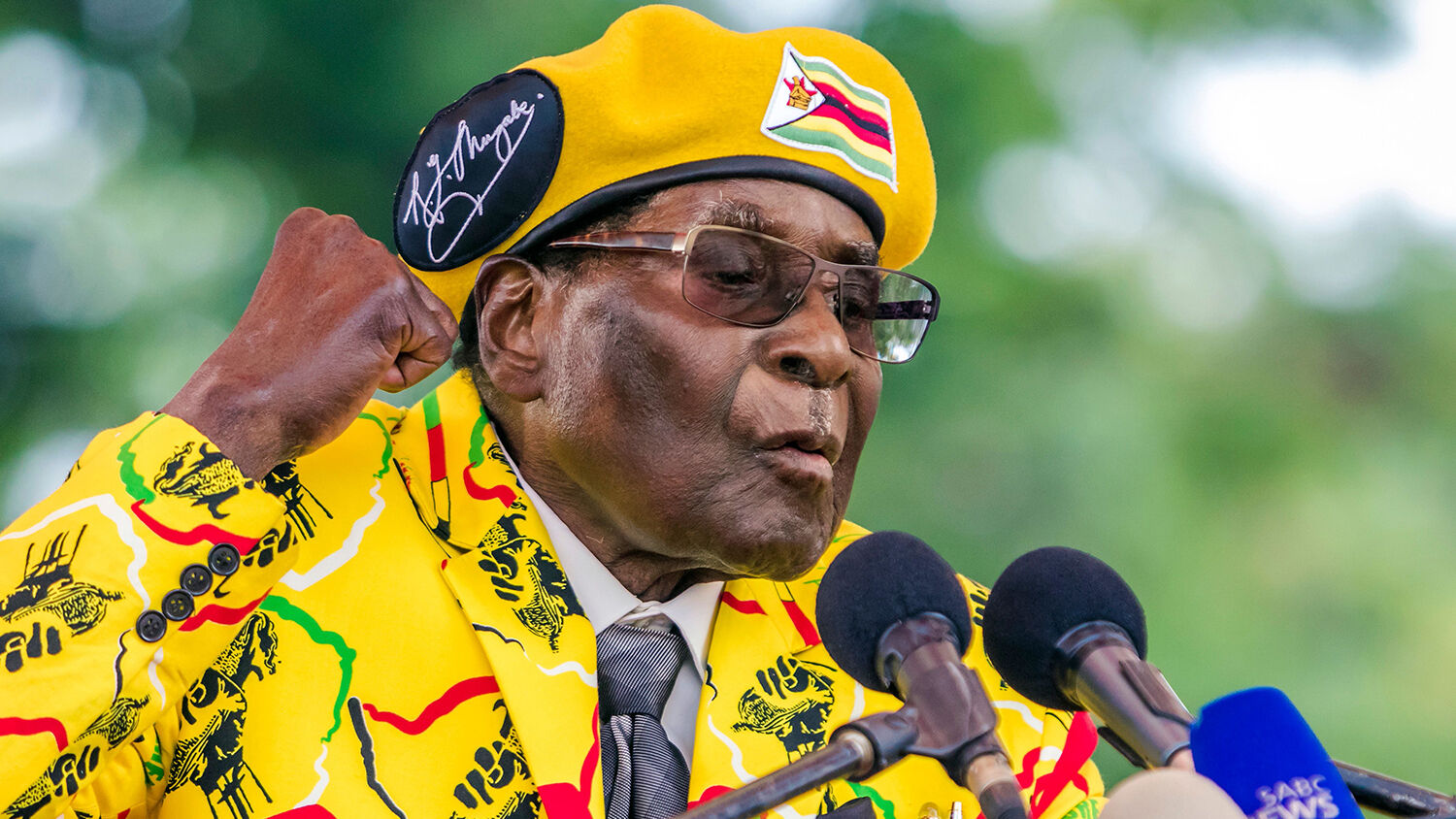 Imagine if the United States had had a different first president. If the central figure of the revolution, the man who vigorously protested the exclusion of locals from governance, the man who fought British forces, the man whose fellow general said was “first in war” and “first in peace” was not George Washington—but Robert Mugabe.

At his inauguration as president of the new nation, Mugabe would have strongly advocated peace. He would have said, “Surely this is now time to beat our swords into plowshares, so we can attend to the problems of developing our economy and our society. … Only a government that subjects itself to the rule of law has any moral right to demand of its citizens obedience to the rule of law. … I urge you, whether you are black or white, to join me in a new pledge to forget our grim past, forgive others and forget. Join hands in a new amity and together … trample upon racialism, tribalism and regionalism, and work hard to reconstruct and rehabilitate our society as we reinvigorate our economic machinery.”

During the nation’s infancy, its first president would have trampled the rule of law. Just four years after the signing of the Declaration of Independence and the Constitution, the president would have used his power and his supporters to commit violence against his political opponents. Over a period of five years, he would have authorized the massacre of more than 20,000 people.

Following that genocide, the president would have then led a constitutional convention, changed the Constitution to dramatically increase his executive powers and turn his young nation into a one-party state. There would have been no President John Adams, no President Thomas Jefferson, no President James Madison.

The first president would not have been content with just two terms in office. In spite of failing health and through the use of sham elections, he would have extended his rule to seven terms, spanning a period of 37 years!

If Robert Mugabe were America’s first president, and if he had ruled in America for as long as he did in Zimbabwe, America as we know it simply wouldn’t exist.

American historian Carol Berkin once said that George Washington “understood very clearly that everything he did as the first president of the United States would be watched by nations abroad and by people at home, and would set a precedent.” The main precedent he set, historians say, is that he left office after two terms. According to William M. Fowler Jr., that actually was Washington’s “finest moment.”

Zimbabwe’s first head of government set a different precedent. His reign began in 1980 and ended in November 2017, when one of his own organized a coup d’état against him. His successor, President Emmerson Mnangagwa, appears determined to retain power for as long as possible and by any means he deems necessary.

Mugabe died on September 6, at age 95, leaving behind a legacy many have described as “complicated.”

Following independence from Britain in 1980, white-minority rule was replaced by black-majority rule. But whites retained ownership of nearly three quarters of the agricultural land in the country—an imbalance that was supposed to be resolved later but never was. Instead, as Mugabe faced the biggest political challenges of his career in the late 1990s, he used race and “land reform” as weapons to gain grassroots support. But those “weapons” destroyed significant segments of society and the economy. The West imposed sanctions on Zimbabwe; investors fled; would-be foreign investors turned away; inflation rose astronomically; severe shortages of basic commodities, including cash, plagued the country; and racial tensions increased.

Robert Mugabe preached peace, but he allegedly authorized the slaughter of thousands of his political opponents. His leadership began with exhortations for racial unity, but it ended with vitriolic statements like, “The only white man you can trust is a dead white man,” and “Our party must continue to strike fear in the heart of the white man, our real enemy!”

Even with seven academic degrees (two of which he earned in prison), Mugabe couldn’t figure out how to solve the multiple problems that bedeviled his country.

He received 14 honorary degrees, but three of them were later revoked. He was knighted by Queen Elizabeth ii in 1994—long after some of his worst atrocities had been publicized—but he was stripped of that honor in 2008.

He championed “African solutions for African problems,” but he died at a hospital in Singapore because Zimbabwe would not have provided high-quality health services.

When Mugabe died, the man who deposed him, Emmerson Mnangagwa, said, “Mugabe was an icon of liberation, a pan-Africanist who dedicated his life to the emancipation and empowerment of his people. His contribution to the history of our nation and continent will never be forgotten.”

Presumably, Mnangagwa will not forget those “contributions,” which eventually compelled him to depose his former ally. Regardless, he, like many others, have celebrated a tyrant in a dangerous way.

South African President Cyril Ramaphosa said Mugabe was “a towering leader of the struggle for independence of the people of Zimbabwe, … an outstanding leader on the African continent, [and] a gallant leader of Pan-Africanism—of the independence of Africa.” Ugandan President Yoweri Museveni said he was a “great son of Africa,” and Tanzanian President John Magufuli said that Africa had lost “one of its bravest and Pan-Africanist leaders, who led by example in opposing colonialism.”

But Mugabe’s Pan-Africanism often seemed like a mere expression of anti-Anglo-Americanism. His opposition to “colonialism” was more of opposition to what is often called neocolonialism. And nations like South Africa are following Mugabe’s bad example in at least one aspect of opposing neocolonialism: a chaotic land expropriation and redistribution program.

“We know our heroes,” said South Africa’s radical opposition leader, Julius Malema. “Let’s continue to fight and protect [Mugabe’s] legacy. We must not allow our enemies to tell us how to remember him.”

It is by the “fruits” and the facts that we should remember Robert Mugabe—and anyone else (Matthew 7:16-20).

Doug Coltart, a Zimbabwean lawyer and human rights activist, wrote on September 8: “It is tempting to see Mugabe through our chosen lens and ignore the complexity of the character that he was. Some engage in an ahistorical narrative that he was a good guy who turned bad. That ignores both the evil he perpetrated during the early years and the good that he achieved even in his twilight years. In truth, Mugabe the educator, Mugabe the freedom fighter, and Mugabe the dictator were intermingled throughout his life.”

What you are up against is a system, not an individual; individuals simply give identity to what is otherwise a system underpinned by corruption, nepotism and gross incompetence. … Robert Mugabe was not zanu-PF [his political party] and zanu-PF was not Robert Mugabe.

Failing to understand that reality shows that our education is also failing us badly; our analysts are also failing us as their explanations that are not drawing us to the real issues. …

Mugabe and President Mnangagwa are mere faces that we see, but they are not the system; a challenge to analysts is to explain what the system is and how it works.

Behind … President Mnangagwa exists a ruthless and cruel system that we thought was Robert Mugabe when, in fact, all Mugabe did was to play along to the facade of such thoughts in order to retain his individual powers and stay in office as long as he ridiculously did.

When he threatened the interests of the system or group, it threw him out; the same can happen to … President Mnangagwa, and our problems will still continue. …

So my challenge to those analysts who are knowledgeable is to explain to us what the system is: Who is the system and how does it work?

Many people believe in a loving God we can call upon to intervene in the affairs of man. Many struggle to understand why, for example, that God does not intervene to prevent tyrants from attaining power in the first place.

The Bible clearly explains why.

An evil spirit influences this world, which 2 Corinthians 4:4 refers to as “the god of this world,” or the god of this present age of mankind’s existence. Through his invisible, though evident influence, he “deceiveth the whole world,” but thankfully, the true God will not allow this to continue indefinitely (Revelation 12:9-12). A time is soon coming when He will intervene in the affairs of mankind in a dramatic way. But He has reserved the prerogative to occasionally intervene in our affairs, even before that future time comes. He wants people to “know that the most High ruleth in the kingdom of men, and giveth it to whomsoever he will, and setteth up over it the basest of men” (Daniel 4:17). Romans 13:1 says, “The powers that be are ordained of God.”

In The United States and Britain in Prophecy (free upon request), Herbert W. Armstrong stated that God allows someone like Robert Mugabe to rule one nation and someone like George Washington to rule another.

When God’s dramatic intervention finally comes, this world will be governed by the righteous leadership of Jesus Christ. That’s exciting to even think about, especially in contrast to the system of man’s governments today. To learn more about this coming time, read Herbert W. Armstrong’s free booklet The Wonderful World Tomorrow—What It Will Be Like.