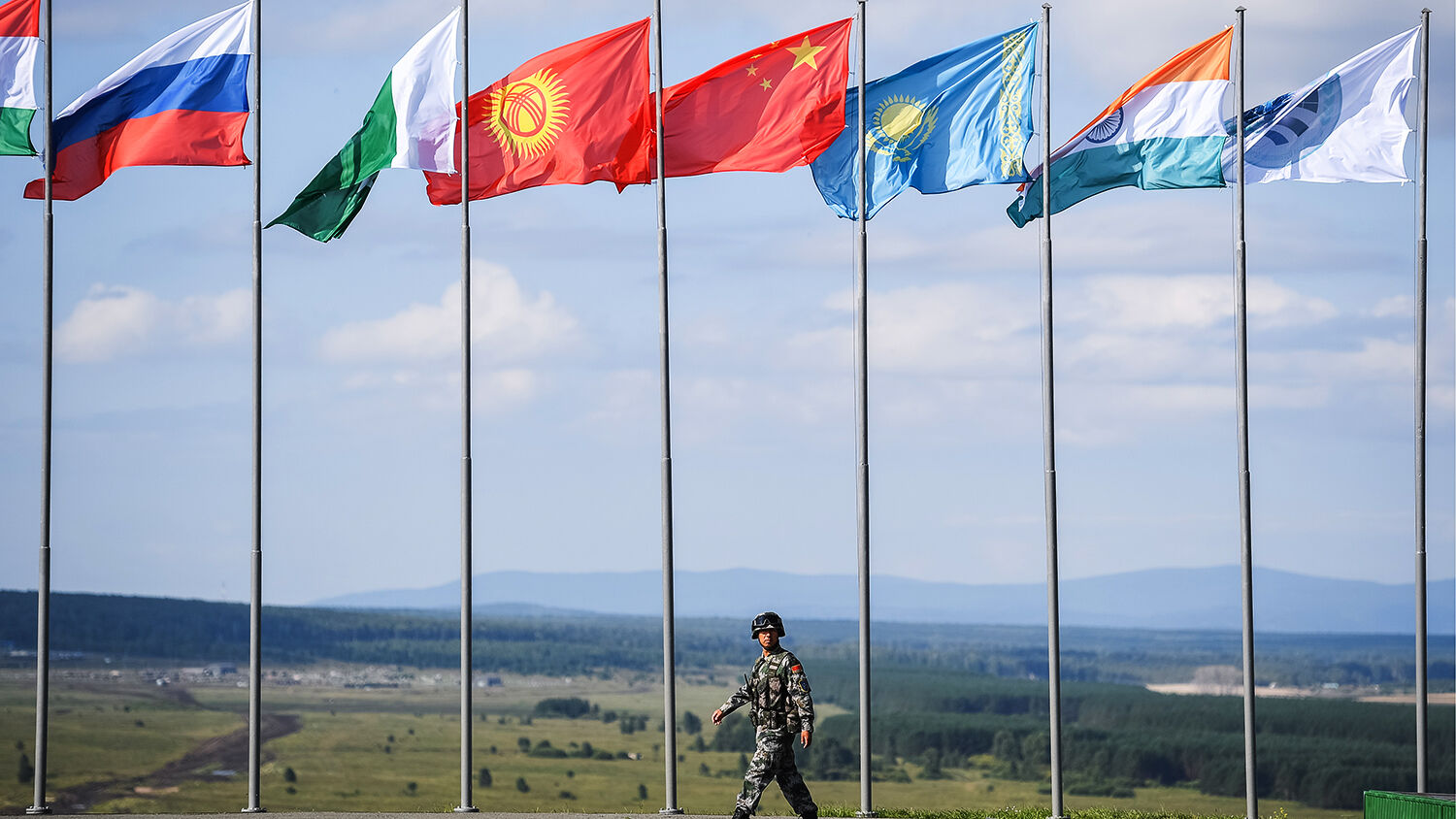 A serviceman of the Chinese People’s Liberation Army walks past the national flags of member states of the Shanghai Cooperation Organization.
Donat Sorokin\TASS via Getty Images

Russia’s ability to rally this ‘curious set of bedfellows’ together is a testimony to the power of Putin’s leadership and influence.

Russia and seven of its Asian partners, including China, India and Pakistan, will hold massive joint military drills from September 16 to 21, the Russian Defense Ministry announced on August 20.

The exercises, named “Tsentr 2019,” will also include four Central Asian republics: Kazakhstan, Kyrgyzstan, Tajikistan and Uzbekistan. The war drills will involve 128,000 military personnel from the eight nations, as well as 20,000 pieces of military equipment, around 600 aircraft and up to 15 naval vessels. The exercises will take place at eight locations in Russia and will focus on air defense operations, counterterrorism and simulated combat.

Geopolitical Futures noted on August 22 that the grouping of participants “makes for a curious set of bedfellows.” This is because of tensions between India and Pakistan, India and China, Kyrgyzstan and Tajikistan, Kyrgyzstan and China, and Kazakhstan and China. The fact that these countries are willing to lay their animosity aside to rehearse for war shoulder-to-shoulder is a testimony to the power of Russia’s leadership. Their desire to strengthen bonds with President Vladimir Putin’s Russia runs deeper than their animosity toward their other neighbors. Geopolitical Futures wrote that these nations’ willingness to drill together is a “sign that Moscow still holds a large degree of influence over this part of the world.”

President Putin himself plays a key role in his country’s influence, as he has worked over the years to cultivate close personal ties with the leaders of China, India and numerous other neighboring nations. These personal relationships have been instrumental in aligning the foreign policy of Russia’s neighbors with that of the Kremlin.

The growing influence of Putin’s Russia is significant in the context of Bible prophecies concerning the current era, called in Scripture the “end time.” Passages in both the Old and New Testaments say that this era will be defined partly by the rise of an Asian power that will soon play a major role in a final world war.

A prophecy in Ezekiel 38 shows that Russia will head this force. A companion passage in Revelation 9:16 says the force will field an army of 200 million men. This is far larger than Russia, with its population of 145 million, could produce on its own. Ezekiel 38 lists ancient names for China, India and other Asian nations that they will come under Russia’s leadership within this bloc and lend their military might and vast populations to it.

When China, India and other nations are factored into the equation, the formation of a force of 200 million becomes mathematically feasible.

The decision of these nations to lay aside their differences in order to take part in “Tsentr 2019” under Russia’s leadership is laying the foundation for those end-time prophecies to be fulfilled. To understand the details of Bible prophecies regarding Russia and the Asian nations’ role in end-time events—and the hope that is tied to these developments—order your free copy of Russia and China in Prophecy.