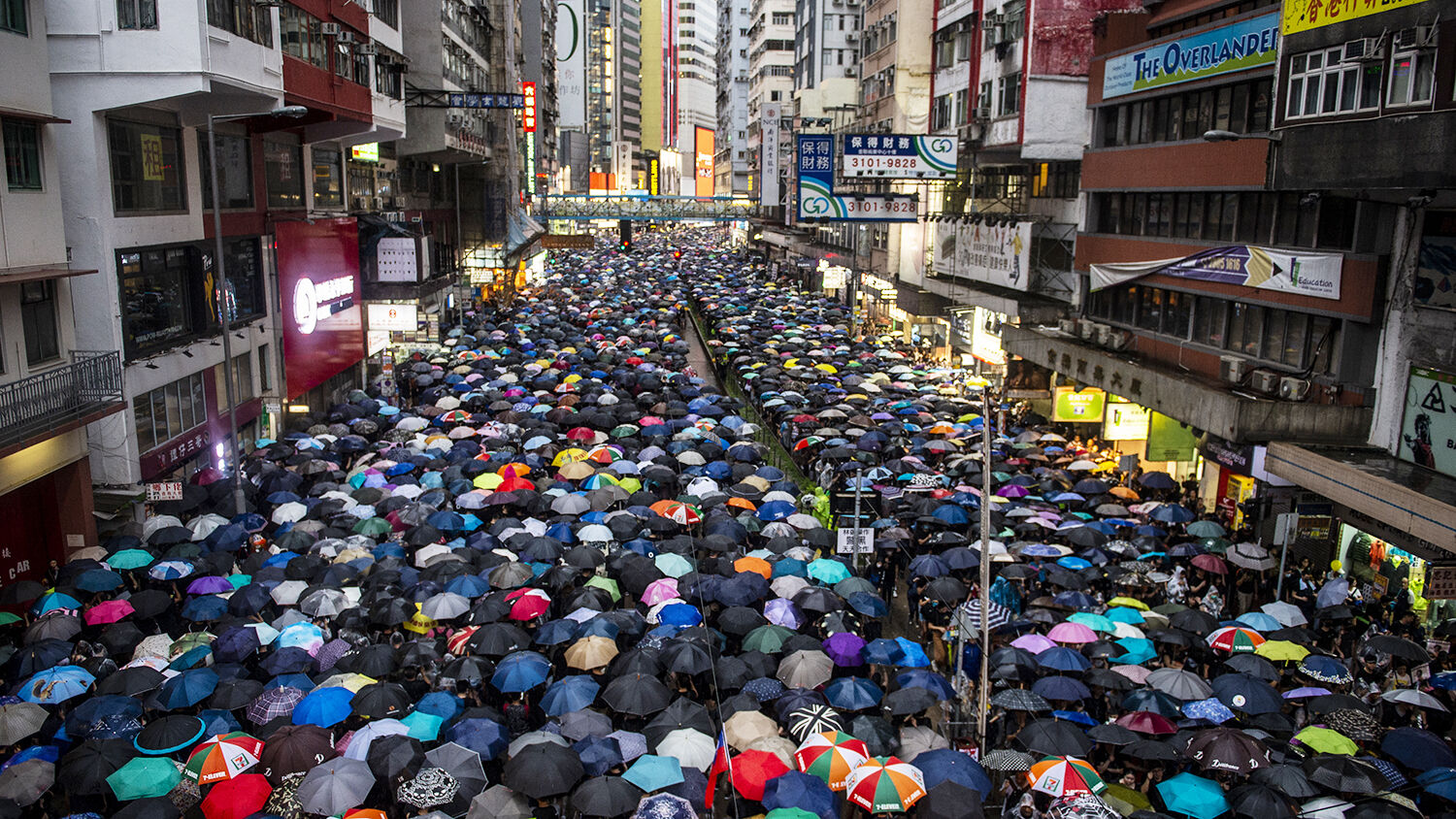 Protesters hold up umbrellas as they walk down a street in Hong Kong on August 18.
Vernon Yuen/NurPhoto via Getty Images

Hong Kong protesters have come through their 11th consecutive weekend of anti-government demonstrations. Rather than see the movement’s momentum dwindle, the ranks swelled on Sunday to 1.7 million. This means almost 1 in 4 of the total population defied both rainstorms and government bans in order to participate.

As the protests persist and as China amasses troops nearby to signal that it’s weighing the option of using force to quash the dissent, a few key takeaways have emerged.

The Lion Was Noble

Throughout the weeks of demonstrations, one symbol that has been frequently spotted on protesters’ T-shirts, lapel pins, Lennon Walls, signs and flagpoles—and even at one point draped atop the Chinese Hong Kong emblem in the government headquarters—is the Hong Kong colonial flag. With a design that includes Britain’s Blue Ensign and the British lion, this flag was used until July 1997, when Prince Charles left Hong Kong on the Royal Yacht Britannia after bearing witness to the territory’s transfer from British to Chinese rule.

Some demonstrators have even taken it a step further, brandishing Great Britain’s current Union Jack.

I hadn’t realised quite how prevalent the use of the old British flag for Hong Kong was at pro-democracy protests there. pic.twitter.com/iWIkHsk6Q8

These have become symbols of the protests because many Hong Kongers look back fondly on the era when Britain ruled the territory. Some wish for independence and full autonomy, while others would prefer to see Hong Kong return to British rule. “I miss colonial times,” 63-year-old Alexandra Wong told Reuters on July 12. “The British colonial time was so good for us.”

A large percentage of protesters are too young to remember much or any of the British era. But they have been taught the history of the UK transforming Hong Kong from what was famously called “a barren island with hardly a house upon it” to one of the most modern, populous, wealthy and judicially impartial places on Earth. They know Hong Kong thrived for a century and a half under the British. And they know that before the UK left, it negotiated an agreement under which China vowed to let Hong Kong maintain a high degree of autonomy for 50 years.

The protesters also see that China is reneging on this vow, maneuvering to control most every aspect of governance and life in Hong Kong. Many older protesters miss the comparatively just British rule, and many younger ones are nostalgic for an era they never experienced.

Meanwhile, in Britain today, many people of all ages are ashamed of the nation’s imperial past. But Trumpet editor in chief Gerald Flurry wrote in August 2012 that this “shouldn’t be” the case. “[T]he British Empire wasn’t even close to being perfect,” he wrote. “But it emphatically was not the cruel, evil and inhumane force that many today think it was.”

Mr. Flurry then quoted Harry V. Jaffa explaining that in the view of Winston Churchill, the British Empire acted to “lift human life away from barbarism and savagery toward civilization and human excellence.”

Hong Kong is a territory where this legacy is evident. Each colonial flag and each Union Jack in the protesters’ hands signals that the Empire was an overwhelmingly positive global force, and that its shortcomings were far outweighed by its benefits.

A Dragon at the Door

The protests also provide a sobering glimpse of the true face of China under the Communist Party’s rule. Back in 2012, Chinese President Xi Jinping tried to reassure the world that China’s rise was peaceful and its ambitions benign. “China is following a path of peaceful development,” he said. “Our progress is absolutely not a challenge or threat to other countries.”

In the years since, Xi and others among the party leadership have repeated such assertions ad infinitum. And since unveiling the Belt and Road Initiative, under which the Chinese government strives to persuade nations to let China into their borders to build infrastructure, the attempts at reassurance have only grown more emphatic. China promises that its projects will enrich other countries while still preserving their national freedom and autonomy. And many have yielded to China’s advances.

But the reality in Hong Kong exposes China’s true ambitions. Twenty-two years ago, Hong Kong allowed the Chinese into its territory. Now it is clear that China is reneging on its promises and that it is bent on dominance.

On the condition of anonymity, an analyst in Hong Kong told the Trumpet that the situation should be a wake-up call for the whole world. “From the bottom of my heart,” he said, “I would warn anyone, in any country, beware of the Chinese government.”

Another prop often spotted among Hong Kong protesters is the umbrella. A carryover from the territory’s 2014 Umbrella Movement, these serve a dual function of providing protection from police pepper spray and symbolizing the demonstrators’ resolve to dig in for the long haul despite adverse conditions.

Don’t forget, solidarity rally with Hong Kong in Aotea Sq from 6 to 8 tonight. If it rains, all the better, then we can be all Umbrella Movement on it. pic.twitter.com/ts2vm4blVs

Demonstrators also often sing and quote a line from a well-known Hong Kong song: “Holding fast to freedom amidst wind and rain.”

Despite the protesters resolve, the storm they are in the outer edges of will only move closer, intensify and expand. And umbrellas will provide no protection against it.

For decades, under the leadership of Britain and America, the world enjoyed relatively clear skies. Pax Britannica and Pax Americana stabilized much of the world and advanced civilization for numerous peoples and nations. This is perhaps more evident in Hong Kong than anywhere. But the temperate Anglo-American era is ending, and storm clouds are gathering for a dark new age.

During His ministry on Earth, Jesus Christ prophesied of this approaching global squall, calling it “the times of the Gentiles” (Luke 21:24).

Mr. Flurry discussed it in the July 2014 Trumpet issue, explaining that the term Gentile refers to non-Israelite peoples. The Israelite peoples make up “a lot more than the little nation in the Middle East,” he wrote, adding that in end-time prophecy, Israel means modern-day America and Britain primarily. (For an enlightening explanation, order your free copy of Herbert W. Armstrong’s The United States and Britain in Prophecy.)

“Once you understand who Israel is,” Mr. Flurry continued, “then you can understand how the Gentiles—the non-Israelite peoples—have started to take charge of the world right now.”

He continued: “While there are many Gentile nations around today, when this prophecy is completely fulfilled there will be two major powers.” He explained that one of these would be led by Germany, and the other by Russia and China.

“These ‘times of the Gentiles’ are yet to be fully realized,” he wrote. “However, we are in the outer edges of this catastrophic storm.”

In Hong Kong, the effects of the transition from Israelite rule to Gentile rule are on display in microcosm. No one argues that British imperialism was perfect; it was administered by men, and all men rule deficiently. But when Hong Kongers anxiously brandish the colonial flag and the Union Jack, they are giving the world an early signal of how dark the times of the Gentiles will be.

Hong Kong is a bellwether for what Mr. Flurry called the coming “catastrophic storm.” And umbrellas will not be enough to protect anyone from this raging and violent tempest.

In His forecast about the raging days ahead, Christ said “men’s hearts” would be “failing them for fear” (Luke 21:26). But in the next verse He promised that the storm clouds would break up and give way to a spectacular radiance: “And then shall they see the Son of man coming in a cloud with power and great glory” (verse 27). These times of the Gentiles, the overcast outer edges of the storm that the world is already in, transition directly to Jesus Christ’s return!

He will bring a decisive end to the storm and usher in a new era of peace and calm. To understand more about the storm clouds gathering in Asia and the clear skies beyond, order our free booklet Russia and China in Prophecy.