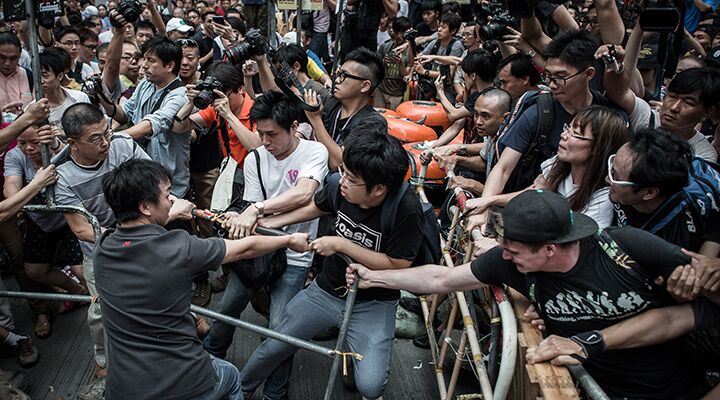 Early on in their protests, the demonstrators of Hong Kong adopted a song from the democratic Western world to be the unofficial anthem of their movement.

Do you hear the people sing?
Singing a song of angry men?
It is the music of a people
Who will not be slaves again!
When the beating of your heart
Echoes the beating of the drums
There is a life about to start
When tomorrow comes!

So goes the chorus of “Do You Hear the People Sing?” The song was written more than 30 years ago for Les Misérables, a musical about the revolutionary period of France. The protesters of Hong Kong—mostly young students—made it their anthem because they saw parallels between the students in Les Mis who fought for revolution, and their own struggle.

“‘Do You Hear the People Sing?’ describes the exact situation in Hong Kong,” a spokesperson for Occupy Central, the main group behind the demonstrations, said. “Beijing is not listening to the voice of the people and we are trying to get our message out but no one is listening.”

What is that message? The Hong Kong protesters want full democracy for their 2017 election. The election is for Hong Kong’s top civil position of chief executive.

On August 31, China announced that the people of Hong Kong can vote in that election—but only for candidates preapproved by Beijing. This announcement is what triggered the protests, with demonstrators decrying it as “fake” Chinese-style democracy. They demand an unrestricted choice of candidates.

Back in 1997, when the British handed back Hong Kong to China, the Chinese promised Hong Kong “a high degree of autonomy” for 50 years. Now residents say that the freedom that distinguishes Hong Kong from the rest of China is rapidly disintegrating.

At their peak, the protests drew tens of thousands to the streets. They congested many of the city’s major traffic arteries, and sparked occasional skirmishes between demonstrators and police, who sometimes used pepper spray, batons and tear gas on the crowds. Some analysts believed the protests could spread into the rest of China, and viewed them as a legitimate threat to China’s ruling Communist Party.

But as the weeks have gone by, the number of protesters has been falling. Both Hong Kong and Beijing have said the students’ demands are impossible. On October 21, Hong Kong officials finally held a round of talks with students, and promised to deliver a report to Beijing about their demands. But no change resulted from the talks, and little is expected even if more discussions are held.

At present, it looks like the struggle of the Hong Kong students may be more accurately described by the lyrics of a different song from the Western world. It was written by Sonny Curtis in 1958, and is called “I Fought the Law”:

The protests are not yet over, but China’s refusal to make any real concessions, or to even to give the protesters any real recognition affirms that in Hong Kong, Beijing is the law—unyielding and uncompromising. The students of Hong Kong sang the song of angry men, and some are singing it still. But, despite their songs, efforts and struggle, it looks like the law won.