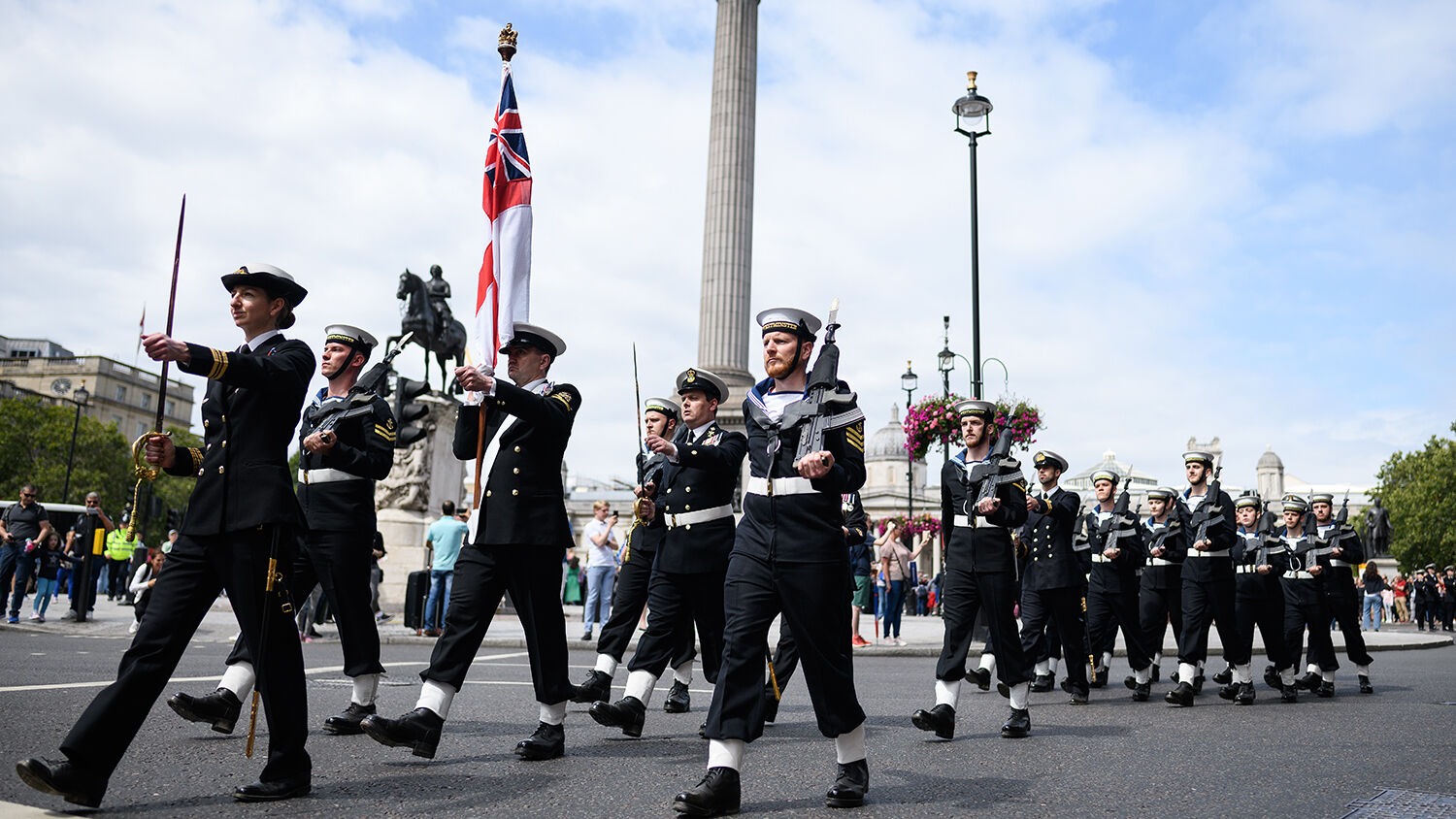 Crew members from hms Westminster exercise their “Freedom of the City” by marching past Nelson’s Column and Westminster on August 7 in London, England.
Leon Neal/Getty Images

The pride of a once-mighty military is being broken.

For nine years in a row, Britain’s army, air force, navy and marines have shrunk, according to new data released by the Ministry of Defense on August 15. Trends point to a continuing decline of recruitment in all major branches of the British military.

The “snowflake” recruitment drive, aimed at drawing in younger generations, has so far failed to change anything. After nine years of decline, the Army, Air Force and Navy have fallen far.

The Army saw the sharpest decline of any branch, while the Air Force, Navy and Marines had smaller decreases. But all branches are falling short of their minimum enlistment requirements. Across all branches, a 7.6 percent deficit exists between the required number of troops and the actual number.

Not only are high-end units like the Marines failing to attract new recruits, but basic pillars of defensive and offensive capabilities—the Army, Air Force and Navy—are all falling in popularity.

The Army is 7,000 troops short of its target level. The Air Force lacks almost 2,000 personnel, and the Navy and Royal Marines are a little over 1,500 short.

These numbers point to a crisis in Britain’s armed forces: The Army is failing to attract young, driven individuals with the desire to serve their country.

Recruitment agencies seem to have exhausted every option, from engaging with millennials and “snowflakes” through “inclusive” recruitment posters, to allowing beards in the Royal Air Force as a move to “broaden the recruitment pool” and help retain personnel. The Army spent £113 million (us$137 million) on a recruitment website in 2012, which ended up running over budget and launching four years late. Many prospective soldiers, airmen and sailors have been frustrated by and given up on applying over the sheer amount of bureaucracy they face in simply trying to join.

What has gone wrong with Britain’s military?

This question is especially relevant in 2019. Iran is threatening British tankers in Hormuz; wars rage in Libya, Yemen and Syria; and Russia and China are catching up to the West in power. Trumpet executive editor Stephen Flurry observed last year that “in this threatening environment, Britain continues to cripple its military.” He then asked a vital question: “After enduring two horrific world wars, does Britain now assume there will never again be another major war?”

The answer to what’s gone wrong, and whether or not Britain should fear another war, lies in how the nation became the great military power that it once was.

How did a small island nation develop a navy that was truly feared, an air force that fought off invasion, and an army renowned for its skill, bravery and toughness?

Britain and the United States are descended from ancient Israel (order a free copy of The United States and Britain in Prophecy to thoroughly prove this). The Bible’s prophecies directly concern Israel and its interactions with other nations. One must look to Scripture to understand what is coming upon modern-day Britain, a descendant of ancient Israel.

Deuteronomy 28 and Leviticus 26 are full of passages detailing the national and material blessings to be given to the descendants of Israel on the condition that they obeyed God. These national blessings were visible to all at the height of the British Empire in the form of military power, natural resources and industrial capacity.

However, those same two chapters also describe curses that would come if Israel turned away from God. One of those curses is found in Leviticus 26:19, where God says, “I will break the pride of your power; and I will make your heaven as iron, and your earth as brass.”

Is Britain’s “pride” in its military power broken today? We see proof of this in the declining enlistment numbers and increasingly desperate ad campaigns.

Deuteronomy 28:15 shows that disobedience to God results in a weak military that fails to strike fear in its enemies. Verse 52 says this weakened condition, resulting from sin, is leading to Britain being besieged and falling victim to its enemies.

Herbert W. Armstrong, founder of the widely distributed Plain Truth newsmagazine, warned in the October 1961 issue that America (and Britain) have already won their last war. He said that less than 20 years after the Allies won World War ii. Over the decades since, British and American debacles in Afghanistan, Vietnam, Korea and elsewhere have proved him right. How could he have known?

No human, only Bible prophecy, can provide sure insights into the future. If you desire to understand more about Britain’s glorious past, its troubled present and its bright future, order your free copy of Herbert W. Armstrong’s The United States and Britain in Prophecy today.