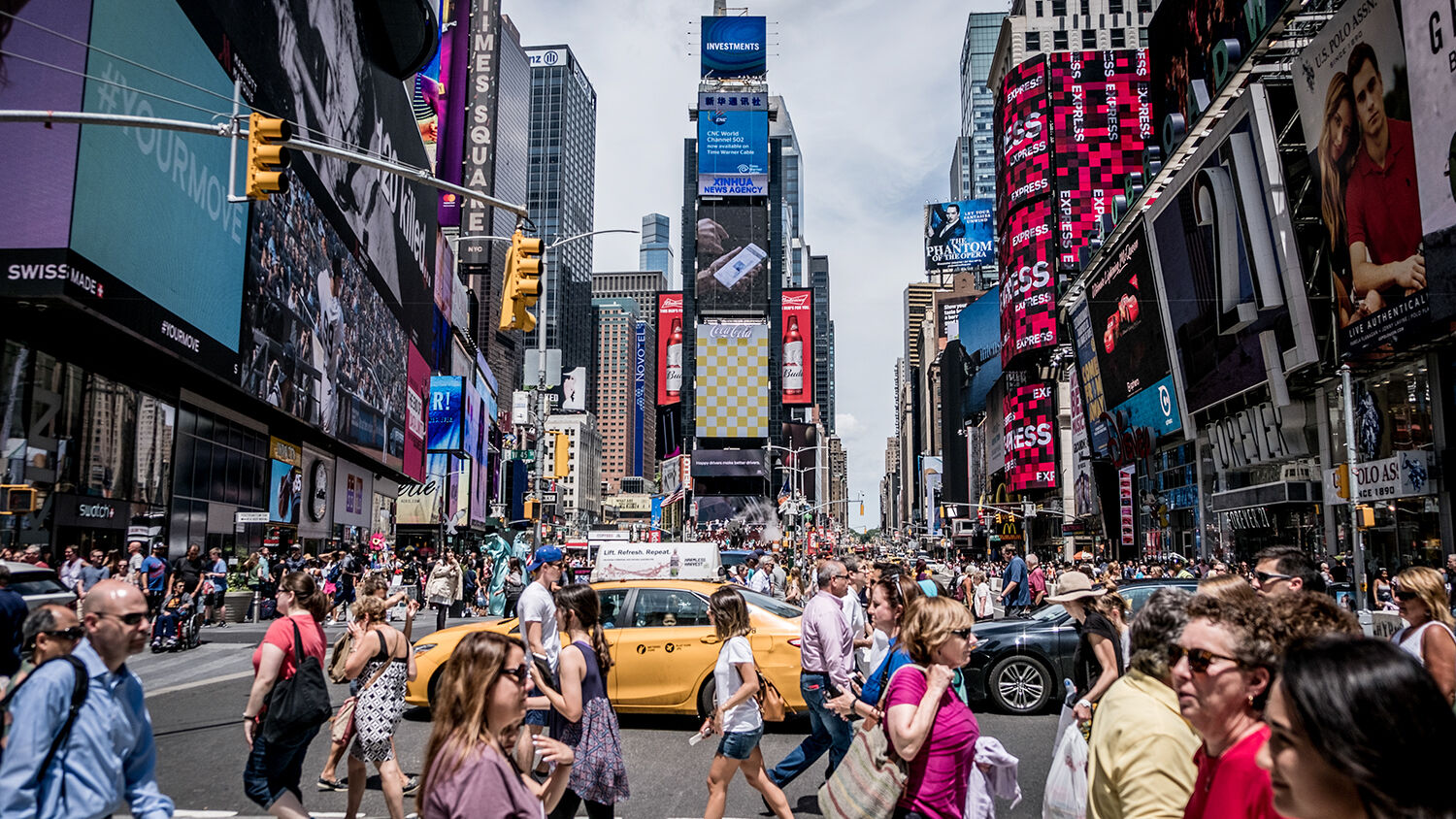 ‘I will even appoint over you terror …. [A]nd ye shall flee when none pursueth you.’

Times Square in New York City fell into panic on the night of August 6 after explosive sounds rang out near Eighth Avenue and West 42nd Street, sending crowds at one of the world’s most visited tourist spots scattering in all directions.

“Everyone thought there was a shooter coming down the streets,” Bridget Siljander told nbc New York. “I thought I was going to watch my daughter get shot down in front of me.”

“I accepted it was my time to die,” actor Brett Tubbs wrote on Twitter. “I stood in a locked bathroom, lights off with 10 women and accepted I’d take the brunt of the spray of bullets. Feel pain unlike I’ve ever known.”

But there was no shooter and no spray of bullets.

WOW: Watch as crowds in #TimesSquare flee what they believed was gunfire after a pair of weekend mass shootings; NYPD says sound was motorcycles backfiring https://t.co/8MzB8W8vhk #LiveDesk #NYC pic.twitter.com/lAdlDh61iK

The explosive sounds turned out to have been from a motorcycle backfiring. By the time the crowds realized there was no real threat, at least 12 people had been injured in the rush, including a man with a shattered kneecap and a woman with a broken wrist.

The Times Square panic was not an isolated incident.

Earlier the same day, shoppers at the Valley Fair Mall in Utah thought they heard gunfire and flew into a collective panic. Local police and reinforcements from neighboring agencies arrived and locked down the mall. Authorities eventually determined that the culprit was a sign that had crashed to the floor. The only arrests police made were of individuals who got into fights during the chaotic evacuation.

URGENT: a false alarm at Valley Fair Mall. People heard a loud bang which was actually the sound of a sign falling. There is no danger. No one is hurt. pic.twitter.com/vZKrCatKp7

The next day, the headquarters of usa Today in Virginia was evacuated after police received a call about a “man with a weapon” near the facility. “Police squad cars, firetrucks and ambulances converged on the scene,” the company reported. “Law enforcement officers with rifles and body armor searched stairwells and a helicopter hovered overhead as they escorted hundreds of employees out of the building.”

We have evacuated the @USATODAY headquarters in McLean, Virginia, after reports of someone who may have had a weapon in the building. pic.twitter.com/EF8DJQCqsN

But the police found no threat. It was yet another false alarm.

These incidents came just days after mass shootings in El Paso, Texas, and Dayton, Ohio, left 31 people dead and dozens injured. One major effect of attacks, such as those and of other acts of terrorism, is the fear they inject into the populace. This fear has the nation on edge. When we hear a motorcycle backfire or a sign hit the floor, we assume the worst. We are quick to think it’s a semi-automatic rifle in the hands of a deranged gunman, and we clamber over each other to avoid a danger that isn’t there.

A 2018 survey by Chapman University found that 42 percent of Americans are “afraid” or “very afraid” of random mass shootings, and 44 percent fear being hit by a terrorist attack. This is despite the fact that the statistical likelihood of an American facing such dangers is extremely low.

The fact that mass shootings and terrorism are causing fear and panic in America was actually foretold thousands of years ago.

Long before the United States of America was established, God prophesied numerous details of the country’s prosperity (Genesis 48:13-22; 49:22-26; Leviticus 26:3-10). God also laid out specifically how He would punish the U.S. if this mighty, blessed nation rejected Him and His law.

The sinning nation would suffer instances of real terror: “I will even appoint over you terror” (Leviticus 26:16). But the prophecy also says it would suffer many cases of false alarms: “[A]nd ye shall flee when none pursueth you” (verse 17). Verse 36 prophesies: “[T]he sound of a shaken leaf shall chase them; and they shall flee, as fleeing from a sword; and they shall fall when none pursueth.”

Does this sound like people stampeding, injuring each other, and sapping police resources because of sounds of motorcycle exhaust or a sign falling?

Even a cursory look at America’s systems of education, politics, religion, military, industry and entertainment make clear that the nation has indeed sinned, rejecting the law of the God who blessed it so abundantly. As the nation continues to slide into lawlessness, Americans will increasingly “flee when none pursueth” and break into mass hysteria at the “sound of a shaken leaf.”

But there is also cause for hope. God spelled out this warning that is now coming to pass in specific detail. Why? Because He is trying to reach out to us. If you can recognize how America’s disobedience toward God is the real cause of the nation’s curses, it can put you on the path to repentance and to being spared from an intensification of those curses.

Bible prophecy also makes plain that after the mass shootings, terrorism, fear and curses, America and the whole world will experience the most peaceful future imaginable. Mass shootings, terrorism and fear will be replaced by peace, prosperity and a single, true religion under the righteous, merciful rulership of Jesus Christ.

To understand more, order your free copy of Herbert W. Armstrong’s booklet The Wonderful World Tomorrow—What It Will Be Like.