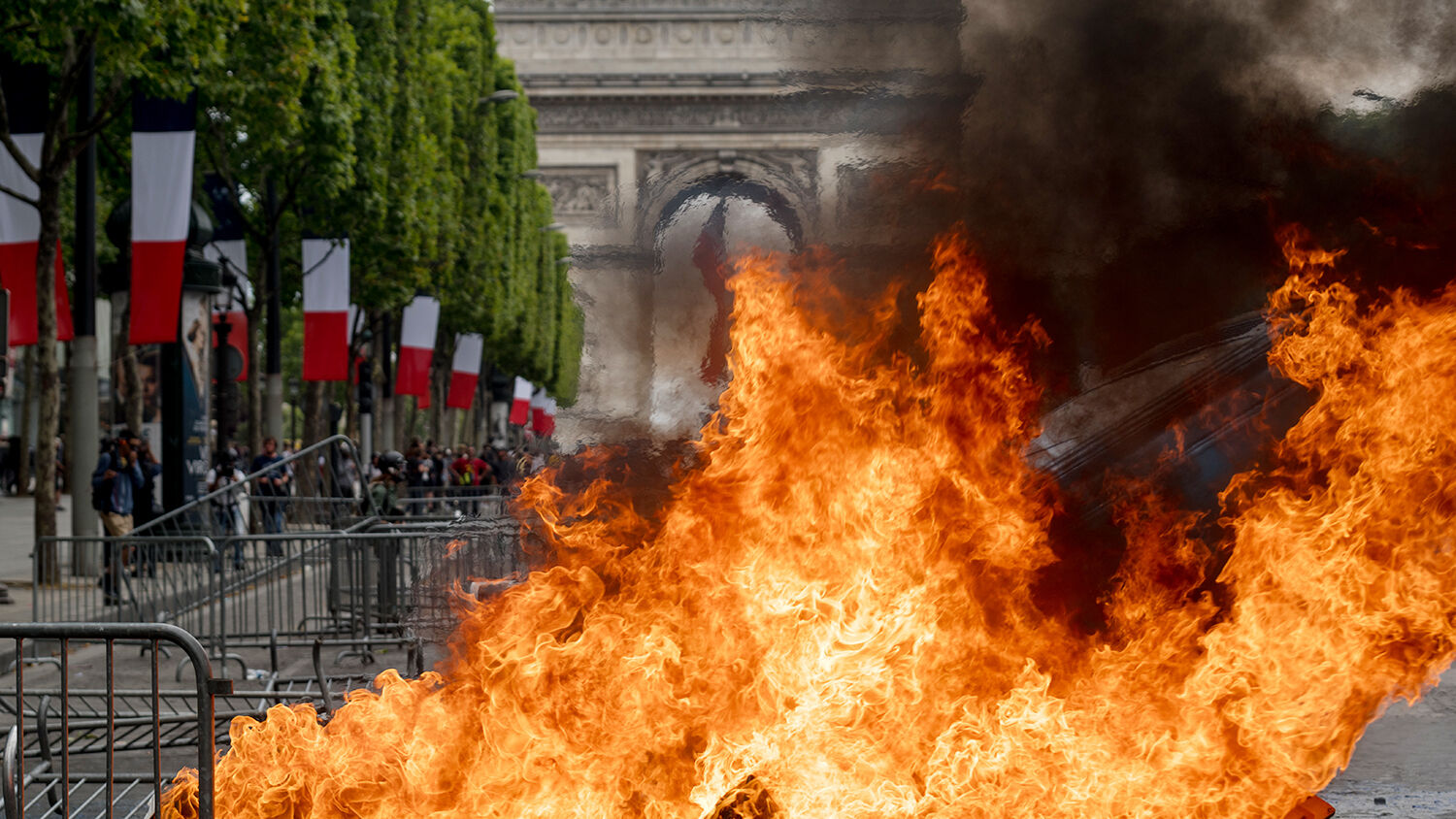 Protesters set a barricade on fire on the Avenue des Champs-Élysées in Paris on July 14.
Estelle Ruiz/NurPhoto/Getty Images

Macron cracks down on freedom of assembly.

Anger is spreading through France after police used tear gas to disperse concertgoers in Nantes in late June, resulting in the death of 24-year-old Steve Caniço. His body was found on July 29 in the Loire River. His death has sparked a backlash against France’s policing methods and government.

Though keeping a lower profile, Yellow Vest demonstrators have not gone away, nor has their stance against the government softened.

“The common denominator is that we are victims of police violence. I lost my eye. Steve lost his life,” Jérôme Rodrigues, a Yellow Vest protester, told Politico.

“For Steve and all the youth killed by the police, we will set fire everywhere in France,” wrote a western France protest group on Facebook.

French citizens are losing confidence in their police force. According to data published by Journal du Dimanche, only 1 in every 2 citizens surveyed described themselves as confident in the police, while 20 percent reported that the police make them nervous.

#France: March in Nantes protesting police brutality. This week, the body of Steve Maia Canico, who was missing since a controversial police raid at a rave, was found in the Loire River.

Here is the protest before and after the same police intervened. pic.twitter.com/VTpX2jq3K1

But it’s not just the police who are losing the French citizens’ trust.

Recent poll results published by Le Figaro magazine show that discontent with French President Emmanuel Macron is growing. Only 27 percent of those surveyed were fully confident or mostly confident that Macron will be able to resolve current issues facing the country. In contrast, a total of 69 percent responded that they either mostly or fully doubted Macron’s ability to solve France’s problems.

The poll also highlights an important fact: Those who disapprove of Macron most strongly are between the ages of 25 and 34. The second-highest rate of disapproval comes from 35-to-49-year-olds; 18-to-24-year-olds came in a close third. France’s vital working-age population—those most likely to be affected directly by Macron’s policies—are his strongest critics.

Manifestations of anger against Macron are becoming more prevalent. One of the most high-profile demonstrations occurred at France’s largest military parade. At Bastille Day on July 14, protesters hurled insults at Macron from the sidelines. Though the protests were kept under control, videos of heated clashes with police surfaced, including more evidence that the Yellow Vest protests have not died out.

Bastille Day celebrations have been overshadowed after violent protests broke out between police and a crowd of ‘Yellow Vests’. #9Today pic.twitter.com/dMgfsPqFMo

It is easy to see why Macron’s popularity is so low: He is cracking down on the freedom of French citizens.

The French senate voted 210 to 115 on March 12 to pass a new law that gives the government and police sweeping powers to arbitrarily stop protests. It has been criticized as a vaguely worded attack on fundamental democratic rights.

According to the law, if a person or group is deemed to pose “a particularly grave threat to public order” and has been accused of damaging property or causing injury, their right to protest can be revoked. The penalty for contravening this law is 6 months in prison and a fine of €7,500 (us$8,300). To support the law, the government will create a national register of offenders banned from participating in protests.

It’s not a law against troublemakers, “it’s a law that bans protests,” wrote Slate. The Parisian Order of Lawyers adopted a unanimous motion condemning the new law, saying it infringes on the rights of people living in a democratic state.

The lawyers noted that an order banning a protest can be issued at any time, including during the protest if the government deems that organizers did not give police enough advance notice. Because the notice can be issued less than 48 hours before a protest, it provides no time for organizers to bring their case before the appropriate court, and it pressures the judge to make a ruling.

In addition to this, Macron’s newest Internet regulations have made headlines around the world, especially in the United States because of the threat they pose to free speech. “If you believe this is a European issue, think again,” wrote Jonathan Turley for the Hill. “Macron and his government are attempting to unilaterally scrub out the Internet of hateful thoughts … the result could be the curtailment of the greatest invention fostering free speech in the history of the world.”

Francois Sureau, a lawyer close to Macron, wrote in Le Monde that the law is more of an attack on citizens than on delinquents. “Democracy does not consist of material objects, like a statue under the Arc de Triomphe, or a government minister’s gate [which was smashed by Yellow Vests]. It consists of the more invisible things, and it is those things which the government is attacking.”

Sureau told Le Monde that the law is being promoted by a “strong current hostile to freedoms” in the government and compared the present challenges to the lack of freedom that characterized Napoleon Bonaparte’s rule. Though Sureau also launched a formal opposition movement against the law, it was still voted in.

For many French citizens, Macron’s government is setting a tone of authoritarianism. Discontent is growing over the toll his policies are taking on the economy and free speech. The pain of his crackdowns is being felt on the streets.

Macron’s style of leadership is preparing France to be led by a strongman.

France, its close ally Germany, and the rest of Europe will soon get much stronger, more authoritative leadership. In 1984, one man clearly predicted the direction of Europe’s efforts to unify. Herbert W. Armstrong, who founded the popular Plain Truth magazine, said, “Europe will reunite, and they will form a new empire—a new nation, political, with one currency, one military force, one government.”

Much of this is already happening. And as Trumpet executive editor Stephen Flurry wrote in 2018, “The only thing this potential empire lacks is a strong, confidence-inspiring leader. Macron might hope to be that leader. … However, the leader of the coming European empire will not be French, but German.”

Few would have looked at Europe in the 1980s and thought of the world power it once was. Even fewer would have predicted that Europe would rise again under a dominant Germany. Yet this is reality today: Germany is the reluctant economic, military and diplomatic leader of Europe. How did Mr. Armstrong know?

Mr. Armstrong relied on Bible prophecy to make these specific predictions, as the Trumpet does today. The Bible predicts that Europe is about to get much stronger leadership than it has seen in a long time. Scripture calls this coming leader a “king” (Daniel 8:23) and shows that he will be elected by flatteries, not by a democratic process (Daniel 11:21).

Such a leader in command of a unified Europe should make everyone watch this prophecy closely. It will directly impact the world you live in soon. The current decline of freedom in Europe is only a precursor to the authoritative leadership that Scripture says is coming to the Continent.

If you want to discover the reality of where European unification is headed, order your free copies of A Strong German Leader Is Imminent, by Trumpet editor in chief Gerald Flurry, and The Holy Roman Empire in Prophecy. These insightful booklets will clearly explain what to watch for in Europe, drawing on the proven track record of Bible prophecy.