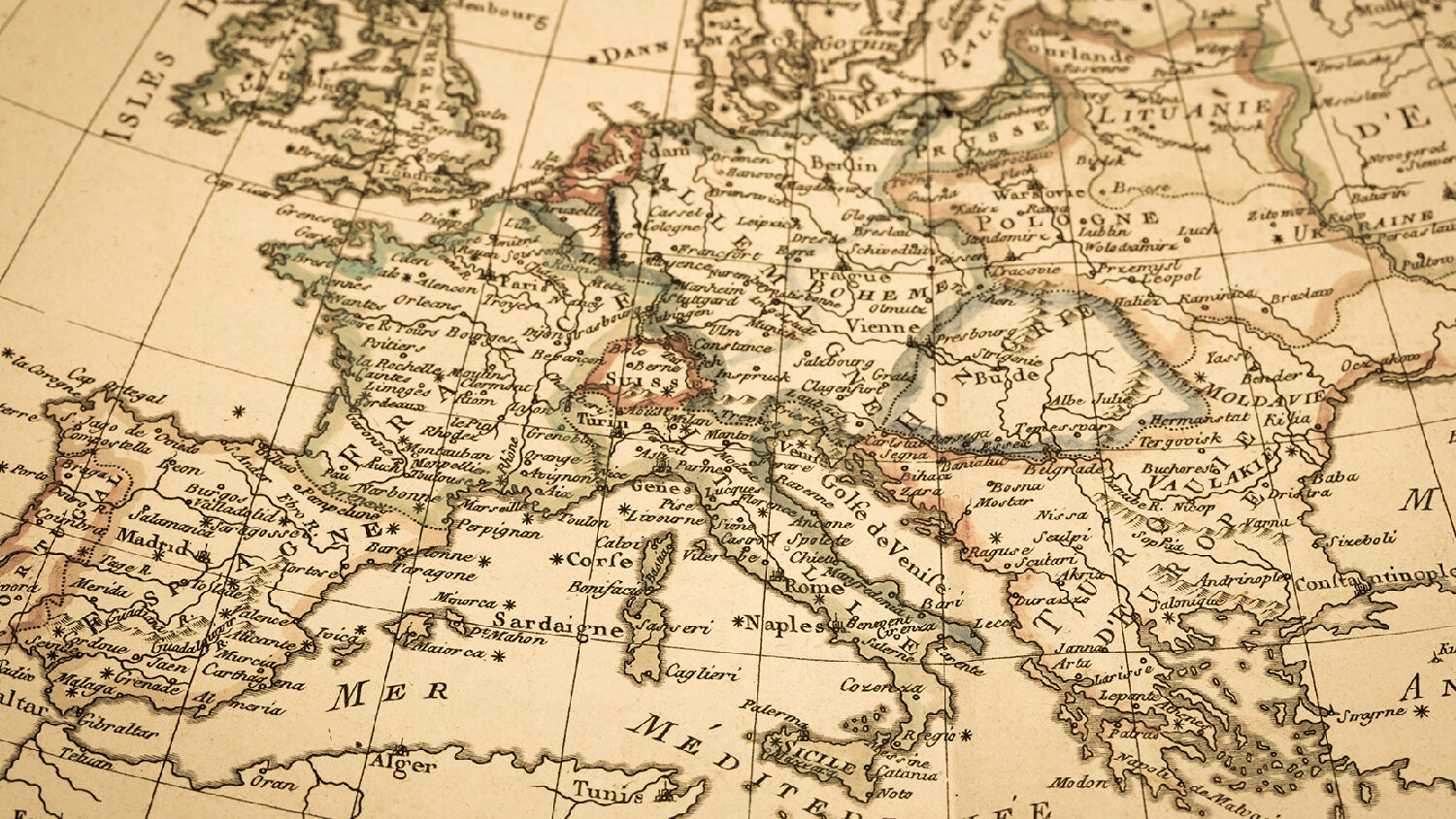 France is ready for a European empire. That is according to French Finance Minister Bruno Le Maire, who said in an interview published on November 12 in Germany’s Handelsblatt newspaper that the European Union must become a “form of empire, like China and the U.S.” Le Maire’s comments come just days after French President Emmanuel Macron said Europe needs a “real army” to defend itself.

“I use the term to sharpen awareness that we are going into a world where power matters,” Le Maire said. “Europe should no longer shrink from deploying its power.”

“It’s going to be all about power … technological power, economic, financial, monetary, cultural power—all will be decisive,” he said. “Europe cannot be shy any longer about using its power” (emphasis added throughout).

What bold statements from France! After decades of Europe talking about sophistication, diplomacy and “soft power,” and shunning phrases like colonialism, power projection and especially “empire,” here are France’s top leaders demanding a literal empire.

Europe is openly, boldly and unapologetically seeking power and unity in all these areas—economic power, cultural power, military power. Does this sound familiar? It should if you have been reading the Trumpet for any length of time. The picture Le Maire paints is exactly the future forecast by Herbert W. Armstrong.

Mr. Armstrong said in a sermon on Aug. 10, 1984: “Europe will reunite, and they will form a new empire: a new nation, political, with one currency, one military force, one government.” In 1982, he said: “Now what they [Europe] want is political union. What they want is one military force. What they want is one great world power ….” This is exactly what Le Maire very publicly emphasized last Monday.

Mr. Armstrong predicted the rise of this European power during and after World War ii. He prophesied political, economic and military integration that would lead to a massive European empire. Europe’s economic union is already established. The basis for a close political union is there. The beginnings of a military union are already in operation. The only thing this potential empire lacks is a strong, confidence-inspiring leader.

“We have talked about it for a long time,” said Le Maire. “Now it’s time for decisions.”

Macron might hope to be that leader. My father said in his Personal Appearance Campaign in Ohio on November 11, “I think President Macron is maybe dreaming of, well, ‘Maybe I might even become this … leader of this European power that’s rising up.’”

However, the leader of the coming European empire will not be French, but German. France is descended from the tribe of Reuben, one of the sons of Jacob, as I explained in my November 12 Trumpet Brief. Rather than fighting alongside its natural allies (America and Britain, also descendants of Jacob), Reuben will ally itself to a European empire dominated by Germany (the descendants of Assyria).

France is already looking to Germany to carry out these dreams of empire.

In his interview with Handelsblatt, Le Maire said that the ball is in Berlin’s court, effectively saying, Look, Germany—we want you to take the lead!

However, as Handelsblatt pointed out: “Without Germany’s support in all these issues, Le Maire will find it difficult to turn Europe into an ‘empire.’ Franco-German agreement has been the engine of European integration and without it the Continent is more impotent than powerful.”

But what is the state of that German leadership?

On October 29, German Chancellor Angela Merkel announced that she would not seek reelection for the chancellorship and would step down as leader of her party, the Christian Democratic Union (cdu). On November 12, German Interior Minister Horst Seehofer announced he also would step down from leadership of his party, the Christian Social Union (csu), the sister party to the cdu.

The Spectator noted this week that as France is suddenly stepping up to oppose the United States and calling for a European military, Germany is enduring a massive change in leadership. With both of these prominent conservative leaders stepping down at once, the German government will undergo a sea change within the next few months.

“The German politicians who were once larger-than-life figures, dominating their political parties as easily as they dominated Germany’s political discourse, are fast becoming dinosaurs,” the Spectator wrote. “If future party officials of the cdu, csu and spd [Social Democratic Party] don’t move quickly in a comprehensive effort to improve their reputations, regain the trust of the voters, and convince them that Germany’s major parties aren’t stewards of defective governance, each of them will be treading perilous waters.”

Who can Germany turn to for political stability? The nation is in massive political upheaval right now, even as France is saying, We need an empire. We need an army. We need a leader. We need Germany.

Bible prophecy describes a situation like this that will lead to a strong German leader arising in Europe. This man obtains “the kingdom by flatteries,” coming into power in a different way from the traditional process (Daniel 11:21). This is why the Trumpet watches individuals like former Defense Minister Karl-Theodor zu Guttenberg. This former superstar of the German government isn’t involved in politics right now, but that could change in a hurry. With the current political turmoil in Germany, his lack of involvement likely serves as an advantage. Is this the man who could be the catalyst for political unity in Germany and Europe? Seehofer has tried to persuade Guttenberg to get back into politics. Now that his nation is facing a crisis in leadership, will it finally persuade the former defense minister to return to the political scene?

A strong leader is one of the last pieces that needs to fall into place for “the king of the north” (Europe) described in the Bible to become reality before our eyes. This is happening.

The Bible—and current headlines—also show that this European power will be anti-American. Le Maire said in his interview: “Everybody knows it takes guts to stand in the way of Donald Trump’s administration. The people of Europe have had enough of the babble from Brussels. They want to see action.”

Herbert Armstrong warned that Europe would turn against the U.S. and Britain. He said in a 1980 World Tomorrow television program, “Just look into past history. You see if we are going to gain anything by trying to build up a United States of Europe. You see if we are not building a Frankenstein that is going to turn on us and destroy us. Most of you will live to see it. You’ll remember that I told you, and that I spoke by the authority of Jesus Christ.”

Already this rising monster is turning against the United States. President Donald Trump tweeted this week: “Emmanuel Macron suggests building its own army to protect Europe against the U.S., China and Russia. But it was Germany in World Wars One & Two—How did that work out for France? They were starting to learn German in Paris before the U.S. came along. Pay for nato or not!”

Even recent history shows that a German-led European empire has never meant good things for Britain. Now French leaders are calling for a European army—and they are going to get one.

The Trumpet has followed in the footsteps of Mr. Armstrong’s flagship magazine, the Plain Truth. We have proclaimed the same Bible prophecies about Europe and other powers for decades. Handelsblatt, the Telegraph, the Spectator, Der Spiegel, the Times and many other respected news sources don’t realize it, but they are now discussing the same thing.

How did Mr. Armstrong know that Europe would form a political union? How did he know that Britain would not be part of that union? How did he know that France would be part of it, but that it would play second fiddle to Germany? The events of the 1930s and 1940s, when he began prophesying, didn’t indicate this. World War ii didn’t indicate it. The 1950s through 1980s, when he died, didn’t indicate it. European history could have gone a million different ways. And at various points, European events diverged from these forecasts. Yet for half a century, Mr. Armstrong maintained the same fundamental forecast about Europe. Why?

He based those forecasts on the sure word of Bible prophecy.

Now we are approaching 2019, and European current events are shaping into exactly what Mr. Armstrong described.

Are you awake to what is going on in the world today?

Too many aren’t. While Europeans openly talk about building an empire to oppose the U.S., we are focusing on domestic issues: voter recounts, drama over a White House press pass, and other events that are perhaps more sensational. Yet Ezekiel 33:28-29 warn that what the Europeans are building will desolate this nation! Most haven’t even heard of the truly significant stories like Europe talking about getting its own army. At the Trumpet, we are dedicated to telling you the truth! Destruction is prophesied to come.

Why? Because unless they face suffering, people will not listen. Our nations are full of sin. At this point, it’s hard for anyone to argue with that. God is going to get our attention, and because we refuse to listen to Him or even believe in Him, He must communicate to us using the only option we’ve left Him. It is going to take desolation for us to pay attention!

God laments this human tendency in verse 11: “As I live, saith the Lord God, I have no pleasure in the death of the wicked; but that the wicked turn from his way and live: turn ye, turn ye from your evil ways; for why will ye die, O house of Israel?”

That is why there is great hope during and after that destruction. Hope that God knows how to teach human beings the lesson. Hope that we will finally recognize the ultimate results of our sins and rebellion against God. Hope that even those who suffer and die will eventually be resurrected and given the opportunity to reject sin and choose obedience. Hope in the return of Jesus Christ and His establishment of God’s Kingdom on Earth.

Ezekiel describes a time prior to all this destruction, when a certain group of people will hear God’s warning message. These few are happy to listen to God’s message—but they do not do anything about it! They love to listen to the Trumpet Daily Radio Show, to read the Trumpet, to hear about how the biblical prophecies of Mr. Armstrong were right. They know they are hearing the message of God. But what does Ezekiel prophesy about these people? Verses 30-31: “[T]hey hear thy words, but they will not do them: for with their mouth they show much love, but their heart goeth after their covetousness.”

They are hearers, but not doers (James 1:22-25). Are you a hearer—or a doer? Open your eyes and see what is happening. Major end-time prophecies are being fulfilled before your eyes! Do something!

Don’t treat this message like a lovely song on the radio. Take action. Ask the same question that people asked the Apostle Peter after his sermon in Acts 2: “What shall we do?” What should you do with this information? If you honestly ask this question, God will lead you where you need to go.

Start now by watching this message. Deeply think about what it says, and pray about it. Pause the video if you have to and pray right then. Cry out to God! Beseech God to show you how not to be one who merely “hears a lovely song,” but who hears His Word and does it. You can have total faith that if you do so, God will show you!