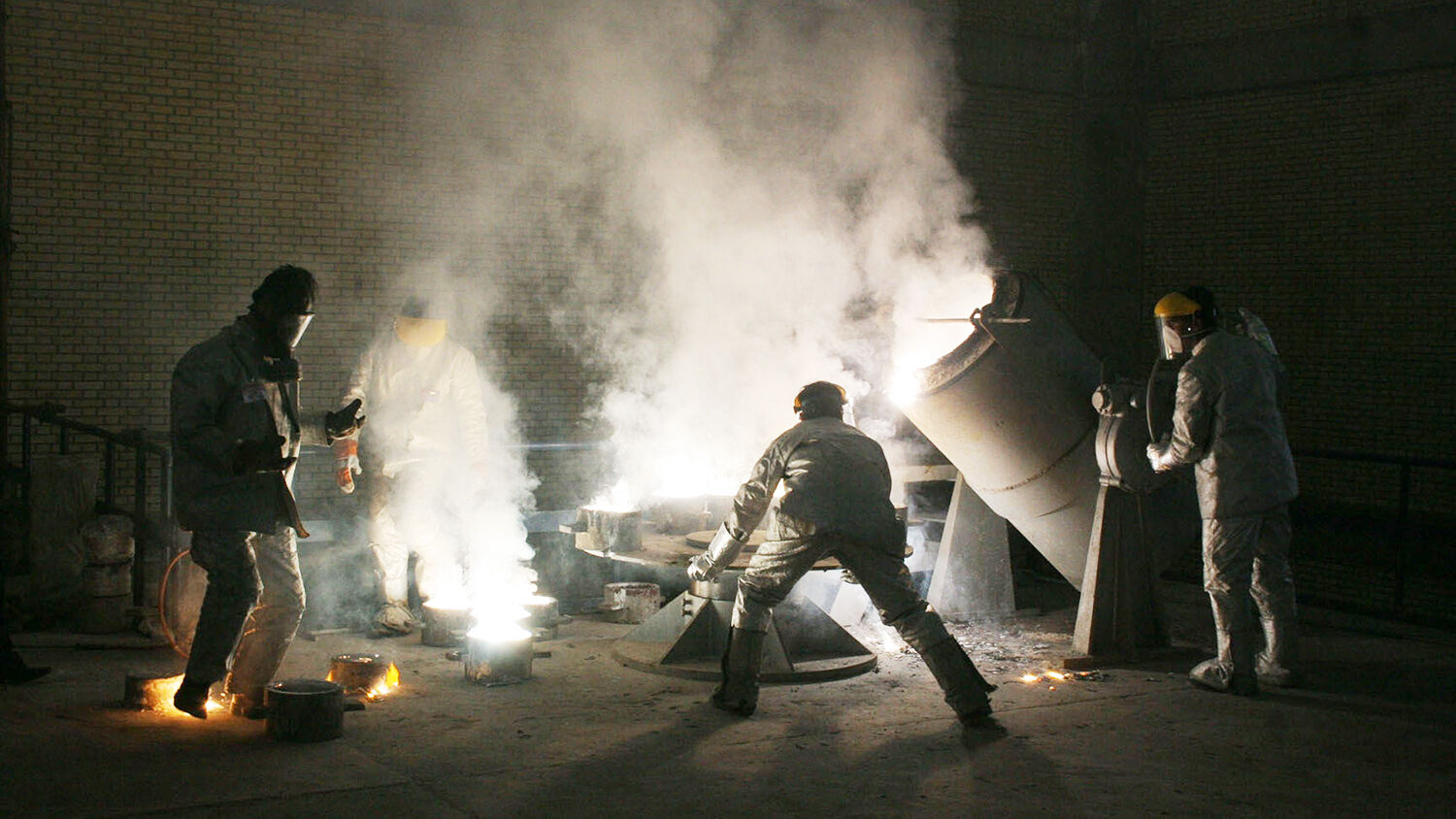 Men work inside a uranium conversion facility on March 30, 2005, just outside the city of Isfahan, Iran.
Getty Images

Iran is going back to the bomb. Having already disregarded multiple requirements of the 2016 Joint Comprehensive Plan of Action (jcpoa) nuclear deal, Iran is now ready to take it further. In a partially televised speech, Iranian Supreme Leader Ayatollah Ali Khamenei announced on July 16, “We have just begun to decrease our commitments [to the jcpoa] gradually and this process will definitely continue.”

Iran will continue the process of cutting down on its #JCPOA commitments.

Every step away from nuclear restrictions is a step toward nuclear weapons. And this is by no means the first step. Ever since the nuclear deal was implemented in 2016, Iran has tried to sidestep the agreement. The mullahs have shown nothing but outright contempt for the deal. Rather than plan for it to work, they have prepared for it to fail.

In response to Iran’s actions, the United States backed out of the deal on May 8, 2018. Shortly thereafter, sanctions were reimposed. At the time, Iran opted to pressure Europe and other jcpoa partners to salvage the deal. Now it appears to be abandoning that route.

It is important to understand how quickly Iran can reinvigorate its nuclear weapons program.

Under the nuclear deal, Iran was told to disassemble—not destroy—more than 13,000 centrifuges. Iran was to operate no more than 6,104 IR-1 centrifuges. Assuming Iran upheld this aspect of the deal, production could theoretically double the moment the stored centrifuges are reassembled and running.

Iran can quickly break limits on uranium in order to get enough material to make a bomb. It was to produce only 3.67 percent enriched uranium, limited to the Natanz facility. The International Atomic Energy Agency confirmed that Iran has exceeded this limit. And Iran’s other facilities, such as Fordow, can quickly enrich uranium to 20 percent.

Ninety percent enriched uranium is required for a nuclear weapon. Christopher Chyba of Princeton University said that once you have reached 20 percent, “you’re most of the way” to 90 percent, taking mere weeks to get there.

Now it’s threatening to violate parts of the #JCPOA.

Under the deal, Iran also promised to stop building and not replace for 11 years the IR-1 centrifuges, its first and most common model. It has, however, since produced more efficient and powerful centrifuges.

Last July, Iran announced the opening of a factory capable of producing 60 centrifuge rotors per day. Head of Iran’s Atomic Energy Agency Ali Akbar Salehi told Al-Jazeera that the nation was on track to reach a goal of operating 190,000 centrifuges. Reuters quoted Salehi, saying, “Instead of building this factory in the next seven or eight years, we built it during the negotiations but did not start it.”

Iran was supposed to limit its stockpile of 3.67 percent enriched uranium to 300 kilograms. It officially blew through that limit in June this year.

Under the terms of the deal, Iran was supposed to convert the Fordow nuclear facility into a research center. According to a report released on July 10 by the Institute for Science and International Security, the facility has “never been repurposed” and “everything required to enrich uranium to weapons grade could be quickly reconstituted in the underground portion of the facility.”

Then there is Arak, the plutonium-producing heavy water facility. Under the terms of the deal, the facility’s pipes and reactor core were pumped full of concrete. However, Iran just installed new pipes. And what about photos of the core filled with concrete? They were simply manipulated with photo-editing software.

#Iran Regime’ Nuclear Chief Brags About Violating Nuclear Deal
Iran’s nuclear chief said on Tuesday that Iran will continue its activities at the heavy water plant in Arak, transfer 30 tons of “yellowcake” uranium to the conversion facility in Natanz…https://t.co/yDm4N3UROx pic.twitter.com/KBL8dhV8Sk

During a live television broadcast in January, Iran’s nuclear chief said, “[Khamenei] warned us that [the Americans] were violators of agreements. We had to act wisely. Not only did we avoid destroying the bridges that we had built, but we also built new bridges that would enable us to go back faster if needed.”

‘Know Them by Their Fruits’

Iran’s actions prove it cannot be trusted. But how long will it be before we wake up to that fact? Will it take a nuclear bomb tested, or worse, dropped on one of our cities?

The issue at stake is human survival! The world has never dealt with a power like Iran. This soon-to-be-nuclear freight train has fanatics at the controls. For years, Iran has worked to move closer and closer to building nuclear weapons, regardless of international pressure and negotiated deals. And it wants to use those weapons. Iran’s former supreme leader, Ruhollah Khomeini, referred to the West as “world devourers.”

Eighty-five percent of 81 million Shiites in Iran believe in Twelver Shiism, which Khomeini espoused. Twelvers believe that the “Twelfth Imam,” the last of 12 divine imams to inherit the Islamic nation, will return to bring justice, i.e. spreading Shia Islam to the entire world, during a time of global calamity. Many Twelvers believe they can hasten his return by intentionally creating conflict. This is an ideology that embraces death.

Too many of our leaders want to reason with these madmen in the face of the critical worldwide danger. Iran’s fruits show us what it is about to do!

What leaders have the will and the means to stop Iran? The United States, Britain and Israel are all embroiled in political infighting. In Leviticus 26:19, God says that He will break the pride of Israel’s power. As Mr. Flurry noted, “America’s capitulation in these negotiations is a prime example of this prophecy being fulfilled.”

The Prophet Daniel was inspired to record a number of prophecies related to the end time. One refers to a rising power known as “the king of the south.” Read Mr. Flurry’s free booklet The King of the South to understand why only Iran can fulfill this role.

This radical Islamic power is prophesied to rise on the world scene with terrible belligerence. Daniel wrote that it would “push” at other world powers, predominately “the king of the north,” a German-led Europe (Daniel 11:40).

Whether he realizes it or not, Israeli Prime Minister Benjamin Netanyahu came close to prophesying this himself. When Europe refused to implement snapback sanctions in July, he said:

It seems that there are those in Europe who won’t wake up until Iranian nuclear missiles fall on European soil, and then, of course, it will be too late.

Nuclear weapons combined with Iran’s arsenal of ballistic missiles would certainly constitute a major push at Europe. And as Daniel wrote, Europe will respond with terrible ferocity. But what about America, Britain and Israel? Notice what Mr. Flurry wrote in 2016:

One striking detail about this prophecy in Daniel 11 is that as these two powers build toward confrontation, America, Britain and Judah (the Jewish state in the Middle East) are nowhere to be found. The nations of Israel aren’t even in the picture. They will be helpless victims, not aggressors, in the coming war.

We can already see the will of these nations faltering in the face of an ascendant Iran. We need the will of a real superpower. In our current state, we cannot confront Iran and the host of other problems coming on the world.

In “Why We Cannot Win the War Against Terrorism,” Mr. Flurry wrote, “Superpowers cannot survive in this evil, warring world without the will to wage long, hard wars. This is the real world in which we live; fantasies won’t change that reality.” But as Mr. Flurry pointed out, even willpower cannot solve our problems.

The Key to Success

Iran is going back to the bomb, and the West seems powerless to stop it. Israel might detest Iran’s actions, but who is taking a stand? As Daniel warned thousands of years ago, because we don’t act, our enemies will. Daniel said that German-led Europe is going to attack Iran like a whirlwind. And it will win.

The world is certainly going to rejoice that nuclear-armed Iranian hard-liners are stopped. But the story doesn’t end there. Daniel also warned that this short but brutal fight will trigger what the Bible calls the Great Tribulation, a time of unparalleled destruction and misery. Both Old and New Testament scriptures warn of such an outcome for those who don’t turn to God and repent.

The good news in all this is that on the heels of this destruction, the Messiah’s coming is guaranteed. God revealed to Daniel that the destruction will last 3½ years (Daniel 12:7). After this “all these things shall be finished.” The U.S., Britain, Israel and the whole world will finally be saved from themselves. God’s prophesied Kingdom will be established, and the world will never again live in the shadows of nuclear destruction.