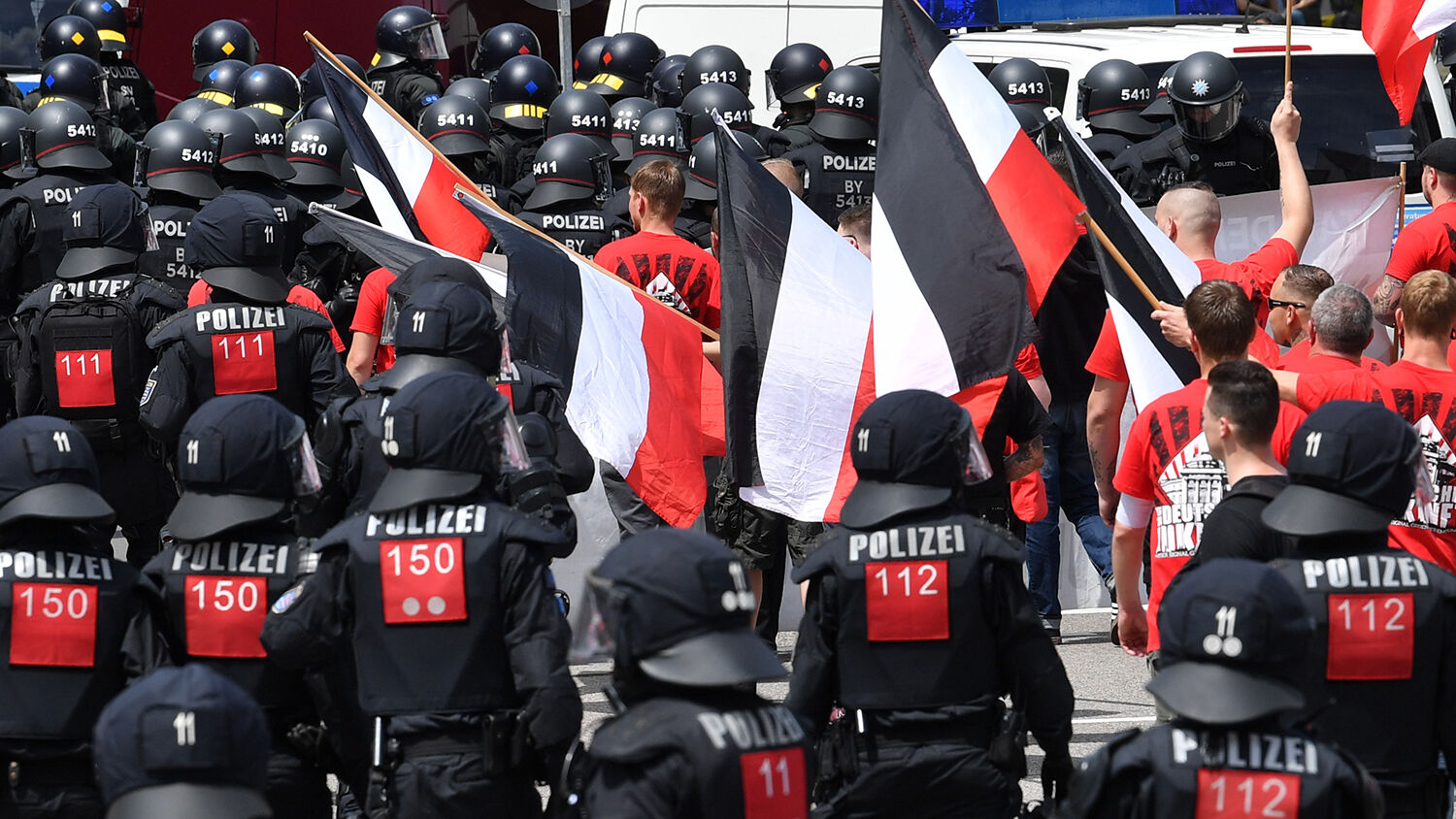 Demonstrators with the right-wing extremist NPD junior organization walk through the city under the motto “Day of the German Future.” Policemen watch the situation.
Getty Images

Members of Germany’s police and military are growing hostile toward their government. In the midst of the unending immigration crisis, officers and soldiers are sympathizing with the Alternative für Deutschland (AfD) party. Last month, Friedrich Merz from the Christian Democratic Union was the first to publicly address the issue.

Chief of the German Police Union Ernst G. Walter agreed with Merz: “The AfD is growing in popularity with the federal police!”

The AfD, which is accused of sympathizing with Germany’s Nazi past, grew in popularity by demanding German Chancellor Angela Merkel’s resignation and presenting a drastically different immigration policy.

In 2018, Merz ran for the Christian Democratic Union party leadership with the promise to win voters back from the Alternative für Deutschland. He lost the contest, but he is still seen as a chancellor candidate in the next national elections.

Jörg Radek, the head of Germany’s largest police union, echoed Merz’s warning. Many police officers “have faced difficulties,” as thousands of migrants have streamed uncontrolled into the country, he said. They feel that Chancellor Merkel’s government has prevented them from protecting the country. Their frustration “has been expressed in sympathy with the right-wing nationalist political spectrum,” Radek said. “The political aftermath of this is that today federal police officers vote for the AfD.”

Germany’s police officers have seen the consequences of the migrant crisis firsthand. They have seen millions of migrants flow over their border. They’ve dealt with those migrants who have rioted and committed rape and other crimes. They have watched the establishment of refugee shelters. And they have witnessed Germans attack those same shelters. All along, Germany’s police officers are the ones called to intervene when tensions rise.

The former head of the Federal Office for the Protection of the Constitution, Hans-Georg Maasen, told Bild, “Friedrich Merz is right. The fury is very great over the fact that the federal government allowed millions of migrants without basis for asylum into the country, that Arab clans walk all over us, that employees of the security authorities are treated badly, and that this was all presented by politics as being without alternatives.”

On May 1, hundreds of neo-Nazis demonstrated on the streets of both Eastern and Western Germany, imitating the Nazi marches of Adolf Hitler’s regime. Participants shouted, “Criminal foreigners out!” and “National socialism now!” The police stood by, watching and even protecting the march against counterprotesters. Spiegel Online commented on the marches in Duisburg:

The people were allowed to show the Nazi salute in front of police officers and were allowed to roar National Socialist slogans imitating Hitler. Speakers alluding to Jews were allowed to speak of the “internationalist octopus” and the “old parasite” and quoted the following Nazi song: “The hate-grenades are thrown into the parliaments because we are not democrats in our hearts we, then and now, are Hitler people.” That all happened. Everything happened undisturbed.

Other investigations have exposed a growing right-wing extremist network among police and soldiers that plan to overthrow the government. Investigations are still ongoing, but the evidence is alarming. Soldiers, reservists, policemen and members of the German intelligence service were all connected with the plans, which includes the assassination of politicians.

“How could the appalling evil and message of hate inspired by Adolf Hitler and the Nazi regime during World War ii ever resurface in this sophisticated age?” Trumpet executive editor Stephen Flurry asked In “The Resurgence of Nazi Germany.” “World history and Bible prophecy should strike us like a bolt of lightning with the proper answer to that question! But man has not learned history’s lesson, and Bible prophecy is laughed to scorn.”

There are parallels today to Hitler’s rise. In his day, the nation was divided. Many desired a more totalitarian regime; they hated Jews and felt suppressed.

As Hitler and his National Socialist movement sought to illegally take over the nation’s government in 1923, his putsch was prevented by the German police. But as Hitler legally rose to power in 1933, he quickly gained control of the security forces to execute his will.

In times of peace, a government is supported by its voters. But in times of turmoil and war, the government relies on its army and police to carry out its policies. Security forces hold the power to support or overthrow a government.

Germany’s security forces today officially fight to suppress right-wing extremism. But historically, they have also proved that they are willing to support the opposite side. But more than history, Bible prophecies warn about major changes coming to Germany. Revelation 17:8 exposes that the power that caused World War ii was not completely destroyed; rather, it went underground. It will rise to the surface one last time.

Many in Germany are frightened by the fact that Nazi ideologies are resurfacing in the police and army. Videos of Nazi marches with police officers standing on the sidelines have left people in disbelief.

A worse form of Nazism is about to rise in Germany. But the God who prophesied about all these events is allowing all of this for a purpose. He is about to intervene in the affairs of mankind to establish lasting peace on Earth.

You can learn more about these prophecies and the reemergence of Nazism in Germany by requesting a free copy of Germany and the Holy Roman Empire, by Trumpet editor in chief Gerald Flurry. In his booklet, Mr. Flurry explains why God allows Germany’s militaristic rise and how God will end it permanently.