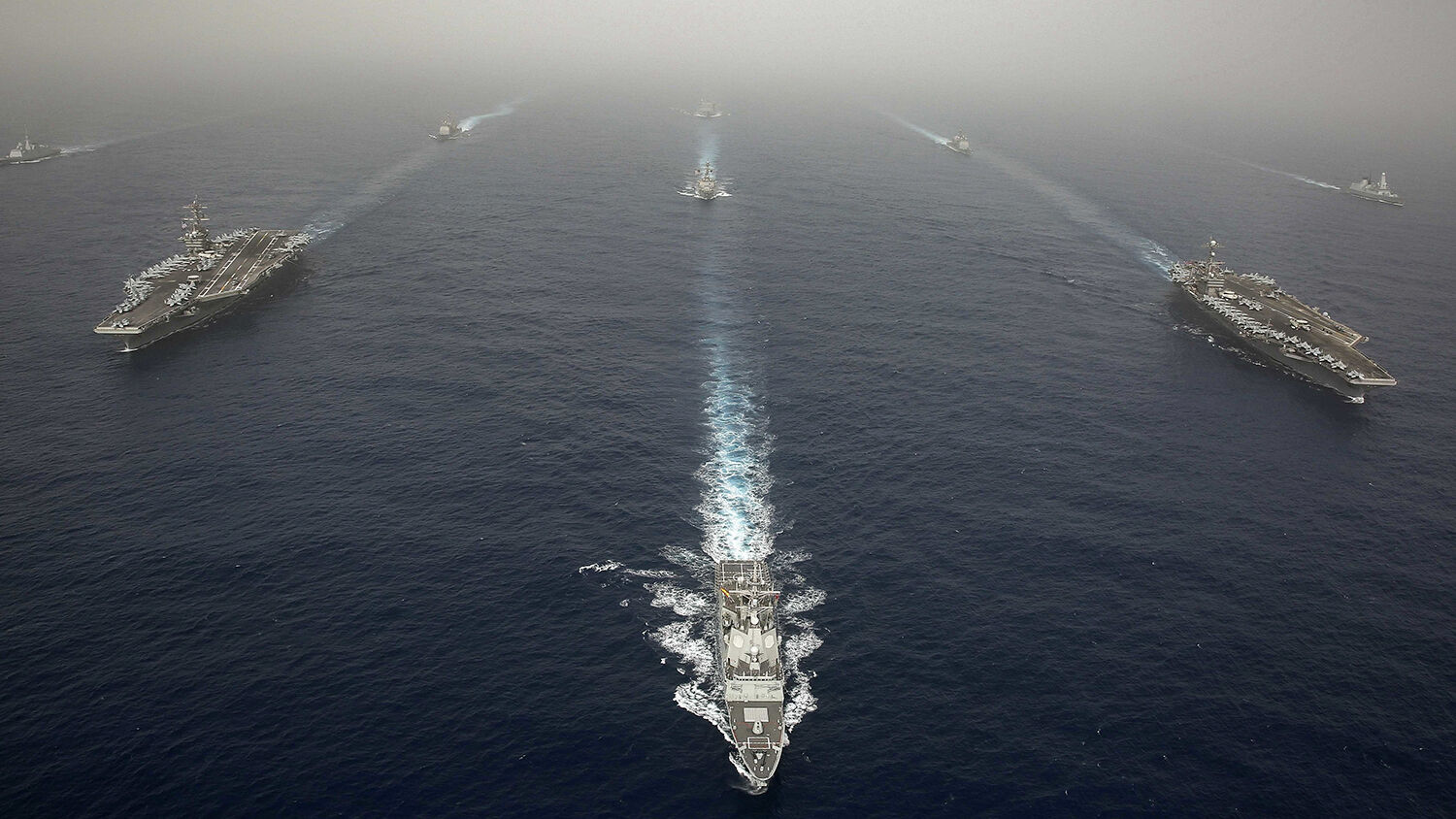 ‘Quantity has a quality all its own.’

The United States and China are competing for control of the world’s oceans. America relies on 11 aircraft carrier strike groups to defend the world’s most important trade routes. China also has an aircraft carrier but relies on its armada of 7,100 merchant ships to dominate shipping lanes. It is a battle of quality versus quantity. America has built the world’s most high-tech navy, while China has built the world’s largest armada of merchant ships. Which strategy equals more national power? A revolution in naval science may change the answer to that question.

Since World War ii, the U.S. has ruled the waves. America’s nuclear-powered supercarriers are the largest warships ever built, floating military bases that weigh 100,000 tons and cost $9 billion each. They are crewed by 7,500 personnel, launching and recovering 70 fighter jets. Together with the other warships in its strike group, a supercarrier has more raw firepower than many entire militaries. This is why former U.S. President Bill Clinton remarked in 1993, “When word of a crisis breaks out in Washington, it’s no accident that the first question that comes to everyone’s lips is: ‘Where’s the nearest carrier?’”

China’s DF-26 anti-ship ballistic missile has been nicknamed the “carrier-killer.” It is 46 feet long, weighs 44,000 pounds and can carry a 4,000-pound payload up to 2,500 miles. With satellite targeting, a DF-26 ballistic missile launched from mainland China could theoretically sink any ship in the western Pacific Ocean. Security analysts are warning that these ballistic missiles can also be mounted on merchant ships.

#China’s Reported #AntiShipBallisticMissile Test in the #SouthChinaSea is a Big Dealhttps://t.co/KRtDEAIqSi

According to Marine Corps Col. Thomas Hammes (Ret.), America’s supercarriers are like medieval knights—heavily armed and well equipped to slaughter any foe they encounter on the field of battle but vulnerable to projectiles fired from far way. At a breakfast hosted by the National Interest on June 5, he recommended that the U.S. Navy shift its focus and resources away from carrier strike groups and onto more numerous missile-armed vessels. These ships would be cheaper than carriers yet able to launch deadly missiles from thousands of miles away.

If China enacts a similar strategy, it could potentially surpass the U.S. in naval might.

China already has over 7,100 merchant ships, while the U.S. has barely 2,000. It would take considerable effort to equip so many ships with ballistic missiles, but weaponizing its merchant fleet would make China a naval superpower with the ability to attack supercarrier groups like wolves attack a buffalo.

Many security analysts are predicting that quantity may trump quality in future wars. Whether or not these security analysts are correct, there is a sure way to know how America’s Navy will fare in future battles. Bible prophecy dogmatically declares that if America does “not hearken unto the voice of the Lord thy God, to observe to do all his commandments and his statutes,” then “a nation of fierce countenance … shall besiege thee in all thy gates” (Deuteronomy 28:15, 50-52).

The late Herbert W. Armstrong explained in his most popular book, The United States and Britain in Prophecy, that the American and British peoples are the literal descendants of the ancient Israelites. God promised to give these peoples control over the “gates” of their enemies (Genesis 22:17). When speaking nationally, a sea gate is a narrow choke point, such as the Strait of Malacca, the Strait of Hormuz, the Bab el-Mandeb, the Turkish Straits, the Suez Canal or the Panama Canal.

God forecast that if the people of America and Britain turn away from Him, enemies would seize control of these gates and besiege them. This is happening. Britain surrendered control of the Suez Canal in 1957; the Strait of Malacca in 1963; the Bab el-Mandeb in 1967; the Strait of Hormuz in 1971. America surrendered control of the Panama Canal in 1999. The U.S. Navy still protects these sea gates, but Bible prophecy shows that this will soon change if the American and British peoples do not repent of the sins that brought on these curses.

These identities are further proved by the fact that these three power blocs control the vast majority of the world’s ships. According to the United Nations Conference on Trade and Development, there were 50,732 merchant ships sailing the high seas last year. The English-speaking peoples (Australia, Canada, New Zealand, the United States and the United Kingdom) owned 3,997 of these vessels; the peoples of the EU owned 15,172 of these vessels. And the peoples of East Asia (China, Japan, Korea and their allies) owned 20,959 of these vessels. This means that the countries of the Isaiah 23 alliance own 71 percent of the world’s merchant fleet.

If nations start weaponizing merchant vessels with ballistic missiles in a war over sea gates, America and its nuclear-powered supercarriers could be besieged by a vast armada of more than 36,000 ships!

The Prophet Isaiah has a powerful message for the peoples of America and Britain. To begin to understand this sobering message and the inspirational hope behind it, read Chapter 7 of Gerald Flurry’s booklet Isaiah’s End-Time Vision, “Building Toward a World Catastrophe.”