Fifty years ago this summer, the world looked to the heavens and wondered, ‘What is man?’ 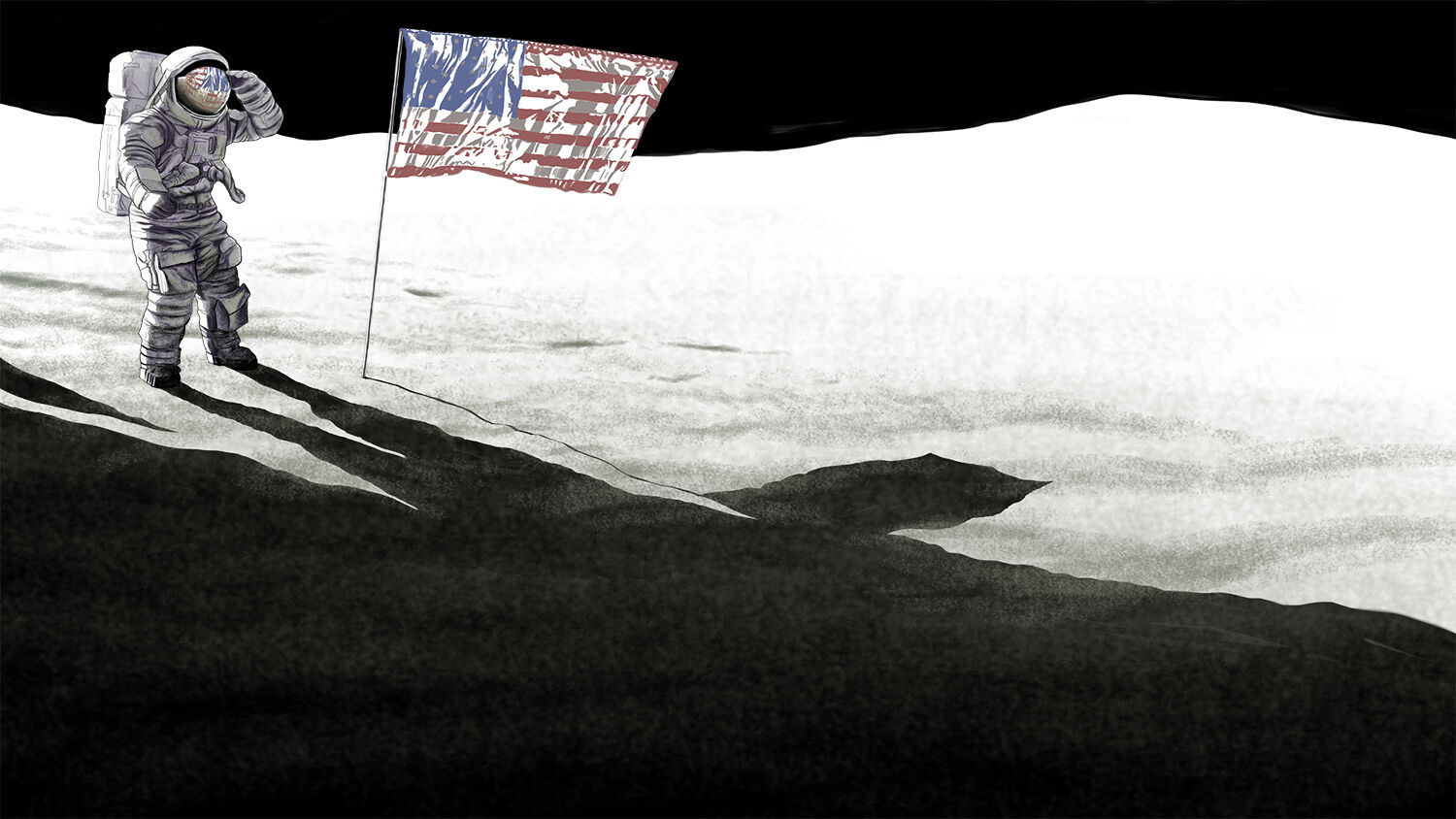 Fifty years ago this summer, the world looked to the heavens and wondered, ‘What is man?’

The rockets they would need didn’t exist. The necessary modules, rovers and variable-power descent engines had not been invented. There were no computers smart, quick and compact enough to guide a spaceship, nor any suits equipped with cooling and life-support systems that could function essentially as a small spacecraft—with room for only one. Microgravity space food and moon-to-Earth communications systems existed only in the imaginations of science-fiction enthusiasts.

But despite all this, United States President John F. Kennedy asked the country on May 25 of 1961 to send a man to the moon and back—within the decade.

“When he asked us to do that in 1961, it was impossible,” said Chris Kraft, an engineer for nasa’s Space Task Force.

Kennedy’s ambition was “impossible” for a constellation of reasons. But Kraft and 400,000 other scientists, engineers and technicians made Kennedy’s goal their goal. Backed by 100 million American taxpayers, they made Kennedy’s dream their dream—for eight years and two months. And on July 20, 1969, at 4:17 p.m. Eastern Time, the Apollo Lunar Module carrying Neil Armstrong and Buzz Aldrin landed on the moon.

Armstrong climbed down the ladder and stood atop the footpad at the base of the lunar module’s leg.

Some 240,000 miles away, Kraft and some 600 million others around the world watched him in grainy, black-and-white television images. Kraft writes in Flight: My Life in Mission Control: “[A]t that moment, watching live with the rest of the world, I stood almost at attention and let each second record in my memory.”

Armstrong lifted his boot off the footpad and extended it over a world that had been pondered by billions of people for thousands of years, but never touched by physical life. It was a realm where no beetle had ever scuttled, no grass blade had ever sprouted, where not even a bacterium had ever lived.

“Not a muscle twitched,” Kraft writes about the teams watching from nasa’s Mission Control in Houston, Texas. “Not a man or woman moved.”

Across the nation and around the world the situation was the same. Mankind stood still, held its breath, and lifted up its eyes.

At 10:56 p.m., Neil Armstrong’s boot touched the soft, powdery dust on the surface of the moon. His radio crackled: “That’s one small step for a man. One giant leap for mankind.”

Soon after, Buzz Aldrin descended and joined Armstrong. The two erected an American flag, set up experiments, collected rocks, and bounced around the crater-pocked moonscape. They unveiled a plaque on the module’s descent stage, which was left on the moon. Armstrong read it to the world: “We came in peace for all mankind.”

Below, millions were riveted to their tvs and radios. During Apollo 11’s flight home, they heard Aldrin tell them this: “Personally, in reflecting on the events of the past several days, a verse from Psalms comes to mind to me. ‘When I consider the heavens, the work of thy fingers, the moon and the stars which thou hast ordained, What is man that thou art mindful of him?’”

These were the words written by David, the sweet psalmist of Israel, thousands of years earlier, as he gazed at the stars and the same moon that Aldrin had just set foot upon.

David marveled at God’s creation. He was enthralled by mankind’s place within it. Later in the psalm, David noted that the same God who created the moon and stars also created mankind to “have dominion” over much of His creation on Earth. Pondering this left him thunderstruck (Psalm 8).

A thousand years later, the Apostle Paul quoted some of those same words in his letter to the Hebrews. Paul brought additional meaning to it, showing that it was not only the earthly creation that the Creator plans to give man. God will place “everything in subjection” under mankind, Paul wrote. “[T]his subjecting of the universe to man implies the leaving nothing not subject to him. But we do not as yet see the universe subject to him” (Hebrews 2:8; Weymouth New Testament).

God made the entire universe for man. All of it will be put under mankind’s control. That is what these scriptures reveal.

In The Incredible Human Potential, the late Herbert W. Armstrong wrote about the profound truth contained in this passage: “[F]or those willing to believe what God says, He says that He has decreed the entire universe—with all its galaxies, its countless suns and planets—everything—will be put under man’s subjection. … We are to be given jurisdiction over the entire universe!”

The passage makes clear that it is “not as yet” under man’s jurisdiction. But it will be in the future.

This scripture in Hebrews is not an oversight. It is not hyperbole. The Bible contains numerous scriptures showing that the Creator’s plan for man includes the whole vast universe. He has a universe-size job for man.

The lunar world that Armstrong and Aldrin walked was barren. “Magnificent desolation,” Aldrin called it. The rest of the universe is equally lifeless. Paul wrote that the entire creation is now in “bondage to decay.” He said it is figuratively “groaning” in anticipation of the “redemption” of mankind (Romans 8:21-23; Revised Standard Version).

The anticipation is acute because after “redemption,” man will reverse the decay!

Mr. Armstrong explained: “This passage indicates precisely what all astronomers and scientific evidence indicate—the suns are as balls of fire, giving out light and heat; but the planets, except for this Earth, are in a state of death, decay and futility—but not forever ….” He wrote that the universe is “waiting” for mankind to “impart life to billions and billions of dead planets, as life has been imparted to this Earth.”

We will turn the present “magnificent desolation” into magnificent biospheres and ecosystems. Man will vivify the planets. Our future is out of this world.

‘Lift Up Your Eyes!’

Trumpet editor in chief Gerald Flurry wrote in July 2009 about the lunar landing. He emphasized that it unified and inspired the world because it briefly “projected mankind’s vision far beyond this Earth.”

This insight is based on the Bible’s teachings. Through the Prophet Isaiah, God tells human beings to look out past our humble planet so that we will see Him and His power: “Lift up your eyes on high,” Isaiah 40:26 states, “and behold who hath created these things.”

During that moment 50 years ago this summer, the people of the world lifted up their eyes 240,000 miles above Earth’s surface. What they were seeing was a glimpse of the Creator God. They beheld His handiwork. They were given a black-and-white preview of humanity’s color-drenched and life-filled future: bringing life to the universe.

God made the moon (Genesis 1:14-16; Jeremiah 31:35) and the vast universe (Isaiah 45:18). He created mankind in His own image and endowed man with breathtaking mind power modeled after His own (Genesis 1:26-27; Job 32:8). This mind power can make an impossible idea possible—such as launching a man to the moon and back.

On that day in 1969, it wasn’t Neil Armstrong, Aldrin, all the scientists or the U.S. whose glory was on radiant display. It was God’s. This is why, as their eyes were lifted up, the people of the world were largely humbled and unified. On some level, especially for those who pondered Aldrin’s recitation of the psalm, they saw a glimpse of the Almighty and His universe-spanning plan for mankind.