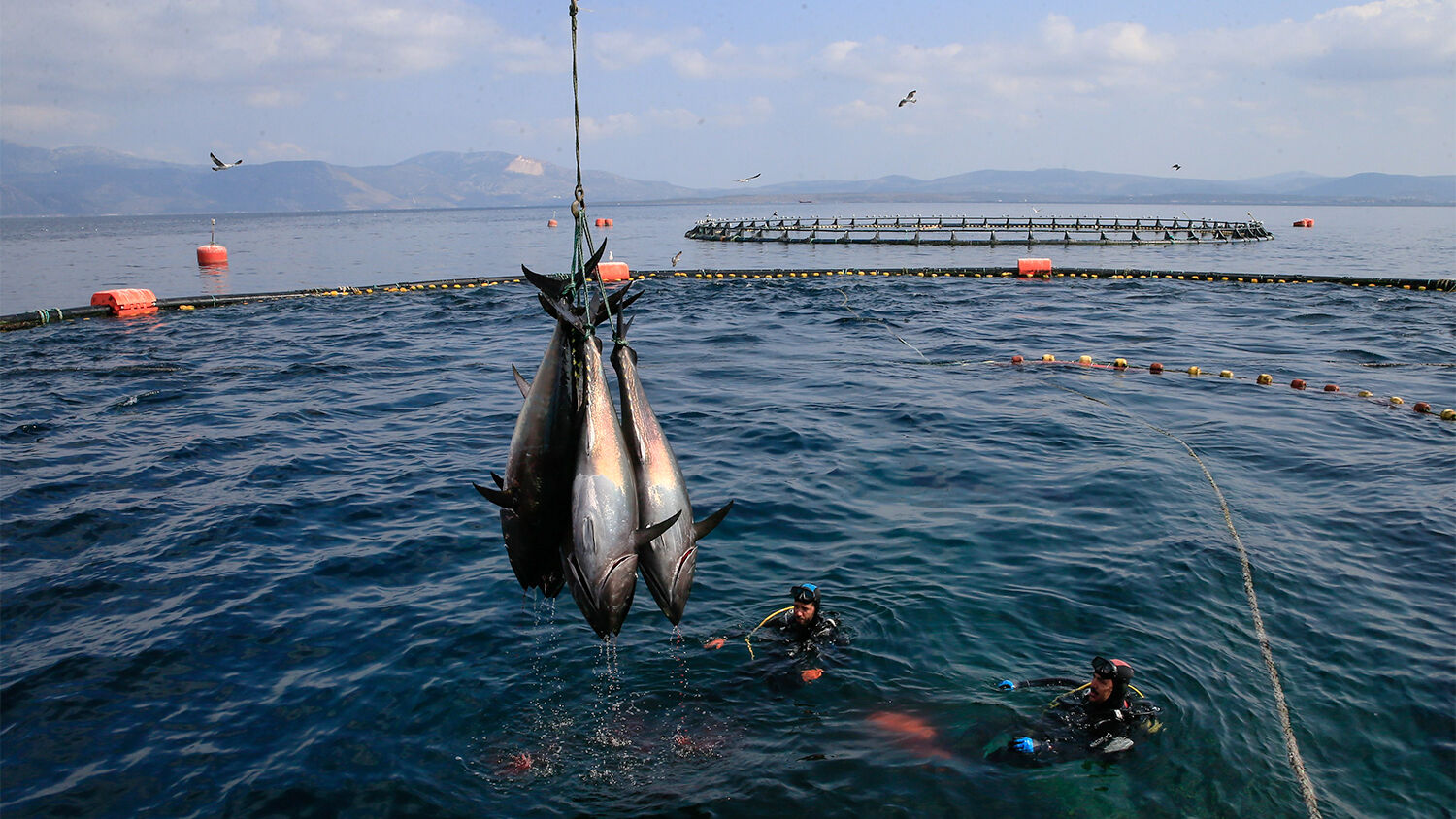 Tuna fish are bred in sea farms in Izmir, Turkey, and prepared to be sold to Japan and European countries.
Mahmut Serdar Alakus/Anadolu Agency/Getty Images

Is the price to our health too high?

If you’re looking for a flavorful, easy-to-prepare dish with impeccable health benefits, wild fish seems to be the way to go. It supplies large amounts of omega-3 fatty acids, which are shown to limit risk of heart attack and stroke, elevate mood, and help prevent certain cancers, cognitive decline and eye disease.

But receiving the health benefits of wild-caught fish may be complicated. Experts now warn these fish may contain toxic industrial byproducts in their flesh. Certain fish, including canned light tuna, can be high in mercury, as well as chemicals that have been linked to some cancers and reproductive problems.

Some are touting a solution to this dilemma: aquaculture (fish farming). It is considered a way to produce more nutritious fish in a more sustainable way.

Farmed fish are increasingly common. Americans consume almost 6 billion pounds of seafood annually, perhaps not realizing there is a good chance their fish never spent a day in the wild.

In many cases, however, the quality of these fish isn’t near what it should be.

The United States imports about 90 percent of its seafood. Some countries where these fish originate have lax regulations. The Government Accountability Office, an independent U.S. government agency, revealed that the Food and Drug Administration inspects 4 percent of fish imports and tests only 0.1 percent for chemical residues.

In Norway, some salmon farms hold more than 2 million fish in crowded conditions. The crowding destroys the ecology of the seafloor. Parasites run rampant. Disease can spread rapidly, even contaminating and killing nearby wild fish. Some experts call these operations little more than floating pig farms. The dense overcrowding, which produces a layer of underwater waste that can be nearly 50 feet high, is equivalent to the sewage of a city of 10,000 people, according to the George Mateljan Foundation.

Fish farm owners counter these problems by giving the fish vaccinations, antibiotics or pesticides. The Food and Drug Administration says this can cause antibiotic-resistant diseases in humans who eat these fish. And these treatments can spread to waterways up to half a mile away.

Some parts of the industry are better than others. In British Columbia, farmers of Atlantic salmon were the first to collectively qualify for the “Global Aquaculture Alliance Best Aquaculture Practices” certification.

Some fish farms are on land. They use closed-containment aquaculture—giant fish tanks resembling large above-ground swimming pools. Temperature and water quality are artificially controlled, so these fish farms can be located close to their markets. This method eliminates the controversial environmental and biological contamination found in coastal aquaculture farms because water is almost completely recycled and residual leftover food and fish waste are broken down into nitrogen and phosphorous-rich fertilizer.

But critics, such as the International Salmon Farmers Association, say that land-based Atlantic salmon profitability depends on higher densities than marine systems. Raising too many fish in a crowded fish farm can lead to abnormal maturation and decreased growth rates. In addition, once pathogens contaminate land-based fish farms, they are virtually impossible to remove until the system is depopulated and all its biological filters are disinfected.

Research from the Johns Hopkins Center for a Livable Future reveals that some fish farms, to increase fish growth and profits, add pig and chicken feces to their fish food.

Looking specifically at farmed salmon, the difference in diet and environment gives a stark contrast in nutritional output. Farmed salmon, for example, are higher in fat, containing slightly more omega-3s, more inflammatory omega-6, and 46 percent more calories—mostly from fat. Wild salmon is higher in minerals, including potassium, zinc and iron.

The next time you’re faced with a piece of farmed fish, remember, no matter how innovative in automation and surveillance, this industry will never be truly healthy. These fish end up nutritionally inferior. Some have called it the equivalent of a floating hot dog.

By law, all fish must be marked as wild or farm-raised. When buying fish, look for packages with labels stating the country of origin. Avoid fish from China and Thailand, most of which are farmed. If the label shows Marine Stewardship Certified (msc), the fishery is in accord with sustainability standards.

Fish farming driven by profit at the cost of nutrition, health and environment is a symptom of a food production industry in need of drastic overhaul. Thankfully, that overhaul is coming. God wants everyone to thrive in abundant health. In the wonderful World Tomorrow, He will heal the mortal wound of greedy gain and institute the knowledge of His right way of life that will cover the Earth.