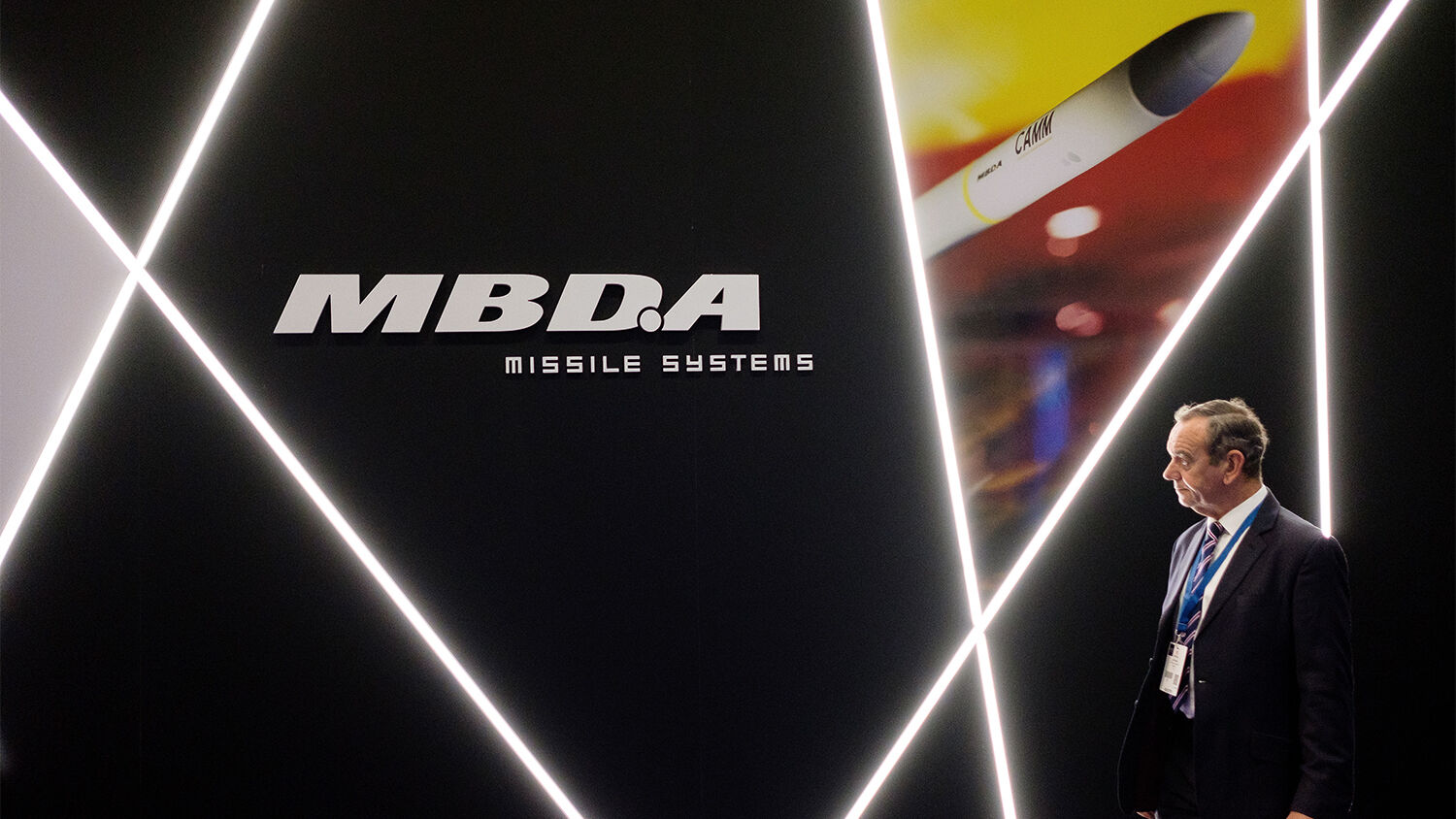 A man walks past the mbda missile systems stand at the annual weapons and security trade fair dsei event on Sept. 12, 2017, in London, England. Manufacturers from all aspects of military, naval, air force and security from all over the world display their latest designs to delegates.
Leon Neal/Getty Images

Germany is quietly racing for the next generation of weapons. Its advantage lies in its secrecy.

In December, Russia shocked the world with a successful test of its Avangard hypersonic missile system. While the United States, Russia and China are racing for new weapon technologies, Germany is racing too, but much more quietly. It is that secrecy, along with Germany’s history, that should greatly alarm the world.

Heilmeier said that developing hypersonic weapons is necessary due to “threats of the concrete kind—keyword Putin’s missile, or even the new Russian tank” (Trumpet translation throughout). The simple principle is to develop missiles that are “so fast that the protective systems of the Russian tank becomes too slow.”

The first test-firings of the missiles are estimated to take place within the next three years. In the meantime, Heilmeier sees the possibility of integrating hypersonic missiles into air defense systems and possibly creating a “European hypersonic interception missile.”

#Gamechanger! Gliding missiles that fly faster than Mach 5 are coming. They combine the speed of intercontinental ballistic missiles with the accuracy of cruise missiles. Future #missile #defence systems have to take that into account. #Bundeswehr #TLVS https://t.co/lENaH3sL47 pic.twitter.com/rTBQvnImbr

There aren’t many details available on the secret project: It is run on the “for German eyes only” principle.

“In its hypersonic plans, the German subsidiary of the European mbda group can fall back on the wealth of experience of its subsidiary Bayern Chemie,” Die Welt reported. “As early as 2003, the expert for guided missile propulsion had a record flight at seven times the speed of sound on ground level.”

mbda Germany and Rheinmetall are now also developing laser cannons for the German military. The first high-energy laser will be installed next year on a German warship.

The advantage of the laser weapons is the higher speed compared to fired ammunition and the high precision with which only certain components of a target can be hit.

As long as a laser weapon has enough power, it can be used. So it has no ammunition magazine that needs to be replenished. A big advantage is that laser weapons are scalable. … Their effect can be dosed, and thus an opponent may be warned first.

In cooperation with France, Germany is already leading the race in developing the next generation of tanks and a Future Combat Air System.

Heilmeier claims that the technologies are being studied for “purely defensive” purposes. But Germany’s history means that we should pay attention when it develops advanced weapons. After World War i, people paid little attention to German weapons development. But one man in Britain sounded the alarm about Germany’s deceptive tactics and advancements in developing military technology.

Concerning Germany’s growing air power, Winston Churchill said in a speech on Nov. 28, 1934, “So far, I have dealt with what I believe is the known, but beyond the known there is also the unknown. We hear from all sides of an air development in Germany far in excess of anything which I have stated today. As to that, all I would say is, ‘Beware!’ Germany is a country fertile in military surprises.”

What Churchill didn’t know was that Germany’s rise to power was prophesied in the Bible. Revelation 17:10 reads: “And there are seven kings: five are fallen, and one is, and the other is not yet come; and when he cometh, he must continue a short space.” The “one is” refers to Adolf Hitler’s Third Reich. This prophecy was revealed to the late Herbert W. Armstrong who saw the rise and fall of Hitler’s Nazi regime. After the war, Mr. Armstrong prophesied of the one that “is not yet come.”

Germany isn’t just militarizing in response to Vladimir Putin. It has planned this for a long time. Mr. Armstrong told radio listeners on May 9, 1945: “From the very start of World War ii, [the Germans] have considered the possibility of losing this second round, as they did the first—and they have carefully, methodically planned, in such eventuality, the third round—World War iii!”

The Bible warns specifically about Germany’s deceptiveness. The book of Nahum is directed at the descendants of ancient Assyria: the modern Germans. “Woe to the bloody city! it is all full of lies and robbery; the prey departeth not; The noise of a whip, and the noise of the rattling of the wheels, and of the pransing horses, and of the jumping chariots. The horseman lifteth up both the bright sword and the glittering spear: and there is a multitude of slain, and a great number of carcases; and there is none end of their corpses; they stumble upon their corpses” (Nahum 3:1-3).

Historically, the Prophet Nahum was describing the ancient Assyrian capital city of Nineveh. But anyone who has seen documentaries of the German concentration camps of World War ii would agree that this description also accurately describes modern Germany. Consider what Trumpet editor in chief Gerald Flurry noted about these verses:

“[T]he prey departeth not”—there is a continual history of preying on other nations! The nations of Israel need to be warned about Germany’s military strategy. Germany is “full of lies and robbery”—or it could read, “deceit and murder.” It is full of deceit! It doesn’t just have a little deceit—it is full of it!

The weapons industry that enabled Hitler’s military power is again racing to win the arms race. Most nations boast about their military developments out of vanity or strategy. But Germany keeps them secret, especially after starting two world wars.

No other nation has a history of starting wars like Germany. It fought the Franco-Prussian War of 1870–71 and thus become a unified nation. The unified German empire was involved in 11 more conflicts between 1871 and the start of World War i. But today, Germany is mostly remembered for starting World War ii as all other military endeavors fade in comparison.

Bible prophecy says it will be the same in this end time. Read more about Germany’s quest to gain military superiority in “France Rejects America—and Empowers Germany!” by Mr. Flurry. Also request a free copy of Winston S. Churchill: The Watchman to learn more about how Germany is preparing secretively for another world war, and whom God is sending to warn about it.