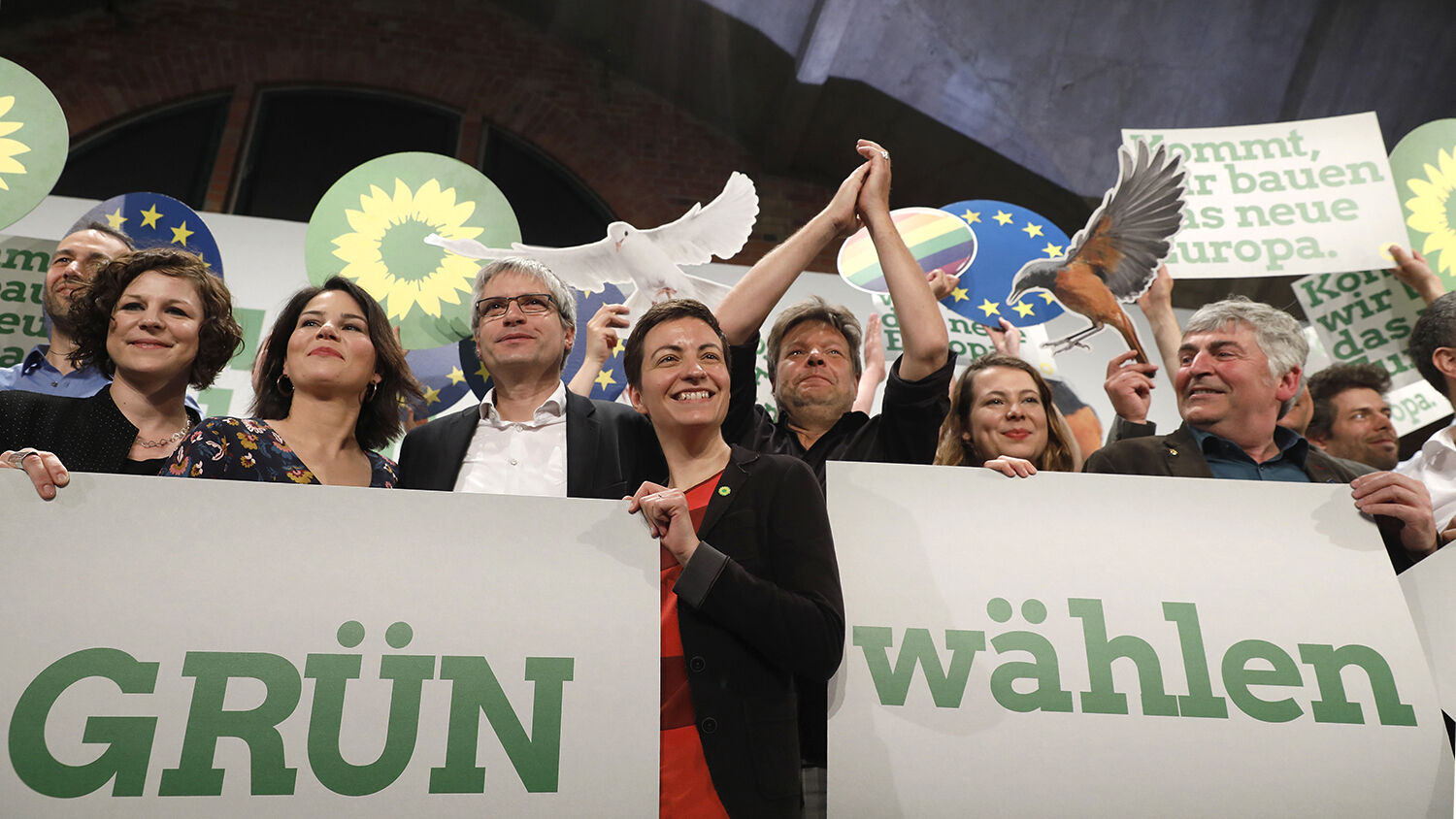 Members of the Greens wave to delegates at a party congress ahead of European elections on May 18 in Berlin, Germany.
Michele Tantussi/Getty Images

Germany’s Green party is rising dramatically in the polls. The party campaigns for a world that is free of environmental pollution, free of social injustices, and free of discrimination. The Greens’ dream is nothing less than utopia. And its means to achieve that dream are not only illusory but also very dangerous. In their quest for a better world, many Germans are trusting in more radical solutions.

In the European elections on May 26, the Greens almost doubled its percentage of the vote to 20.5 percent. It came in second only to the Christian Democratic Union–Christian Social Union. For the first time in history, the Greens could be a contestant for Germany’s leadership. And the upward trend continues.

A May 27–31 Forsa Trend Barometer by rtl and n-tv puts the Greens currently as Germany’s strongest political party nationwide, supported by 27 percent of German voters. The Christian Democrats fell to 26 percent. The Social Democrats fell to a historic low of 12 percent.

The popularity of the movement is growing especially fast among young people. Thousands of students demonstrate for a greener world at “Fridays for Future” marches. The students demand that the politicians finally act and implement more environmentalist policies.

Most look at the Greens, with its goal of establishing a utopia, as a shining bright light in a darkening world. Its rise stands in stark contrast to Europe’s far right.

But the Greens’ demands are aimed at destroying the liberal world order.

The first thing that probably comes to mind when thinking about the Greens’ visionary policies is the promise of a “green” world, a world free of environmental pollution and full of wind turbines. The party is a strong advocate of the Paris Agreement on combating climate change and demands a stricter enforcement of eco-friendly policies. Less known about the Greens is its demand to end discrimination, strengthen the European Union, and empower police and security forces.

The party’s roots trace back to the 1970s, when protests against nuclear energy and social injustices were popular. From the beginning, the party claimed to fight capitalism or the market-based order led by the United States. Many at the time blamed domestic and global poverty on this order. History shows, however, that capitalism has done more to eradicate poverty than to create poverty. Today, it is commonly believed that the causes of poverty in Africa are more complex than previously thought and more closely linked to Africa’s own corrupt governments. The Greens’ anticapitalist rhetoric has also changed over the years, but its underlining reasoning has remained the same.

In an interview with Der Spiegel published June 7, Greens politician Jürgen Trittin talked about how the party’s objections can be understood today. Trittin has shaped Germany like almost no other Greens politician. He joined the movement early in the 1970s while keeping close ties to a Communist group of which he was a member. He served in various political positions within the Green party, including that of Germany’s environment minister between 1998 and 2005.

In the interview, Der Spiegel recounted how Trittin fought capitalism in the 1970s and asked how much the opponent has changed since. Trittin responded, saying that we are still “dealing with a capitalism that is very globalized and driven by the financial market. Today, it creates monopolies that were unimaginable at the time. Internet monopolists, such as Facebook and Google, will need to be shattered, like the U.S.-monopolized oil industry was shattered in the early 20th century. These giants cannot be permitted to prevent new competition” (Trumpet translation throughout).

In other words, the Greens’ fight against capitalism continues.

Now the Greens are campaigning against the U.S.’s media monopoly. That is part of the reason why the party values cooperating with the EU, which can enforce such laws on its member states.

Some see capitalism as the beacon of the free world; others, like Trittin, see it as an oppressive system. While the U.S., for example, increases in riches, other countries abound in poverty. While some in capitalist countries increase in wealth, others increase in wants. The huge gulf between rich and poor is caused by capitalism, so the theory goes.

Transferring Power to the Government

If you understand the Greens’ demands in light of its anticapitalist stance, you start to see where its policies are leading. The Greens’ eagerness to enforce environmental policies, for example, opens a door for the government to grow more powerful and more closely regulate businesses.

Few think that the Greens could successfully lead Germany. Even if it becomes the strongest force in the next election, forming a coalition and implementing its policies would be extremely difficult. German industry has too much power, and the nation’s survival depends largely on its industry.

Still, the Greens is gaining momentum to enforce many of its demands. One of its primary goals is to empower the EU to enforce its will on member states. The party’s success in European Parliament elections will likely further this cause.

Many Germans may be voting for the Greens because they abhor the rise of the far right, frown on the supposed ignorance of U.S. President Donald Trump, and are frustrated with Europe’s elite. While the Greens may not stand the test of time, the German people are becoming increasingly vulnerable to accepting an authoritarian regime. The Bible reveals that this will not end well.

Millions of people desire world peace, prosperity and a pure environment. But these hopes are unachievable in today’s world. In fact, the Bible reveals that the way man goes about pursuing peace leads to death: “There is a way which seemeth right unto a man, but the end thereof are the ways of death” (Proverbs 14:12).

In Mystery of the Ages, the late theologian Herbert W. Armstrong explained why man’s attempts to bring peace lead to war. From the beginning, mankind has chosen to rebel against God’s rule and attempted to solve its problems on its own.

The rise of the Greens seems like a sign of hope for mankind. But a close look at its policies reveals that it can never bring about utopia.

Germans are looking for a solution to the world’s mounting problems. But no one can find that solution without God. The modern-day descendants of the ancient Israelites (primarily the United States, Great Britain and the Jewish nation in the Middle East) also continue to rebel against God. God promised Israel many blessings if it would lead the world to righteousness, but instead it has led the world to sin and will be cursed for it.

Because of man’s rebellion, the world today is in chaos and Germany is looking for a strong leader. “And in the latter time of their kingdom, when the transgressors are come to the full, a king of fierce countenance, and understanding dark sentences, shall stand up” (Daniel 8:23). Request your free copy of A Strong German Leader Is Imminent, by Gerald Flurry, for more information.

This man is not prophesied to hail from the Greens, but he will exploit many of Germany’s fears and dreams. He too will seem morally upright and gladly take all the power the German people are willing to sacrifice. While he may promise utopia, he will create the greatest dystopia this world has ever seen. Once again, history will show that mankind does not know how to bring about peace. Instead man’s attempts will again lead to war (verse 24).

The God who prophesies this turn of events has also foretold that once mankind learns its lessons, He will set up a true utopia on Earth. Request a free copy of The Wonderful World Tomorrow—What It Will Be Like, by Mr. Armstrong, to learn why man’s attempts to bring about peace have failed and how God will bring about true utopia.