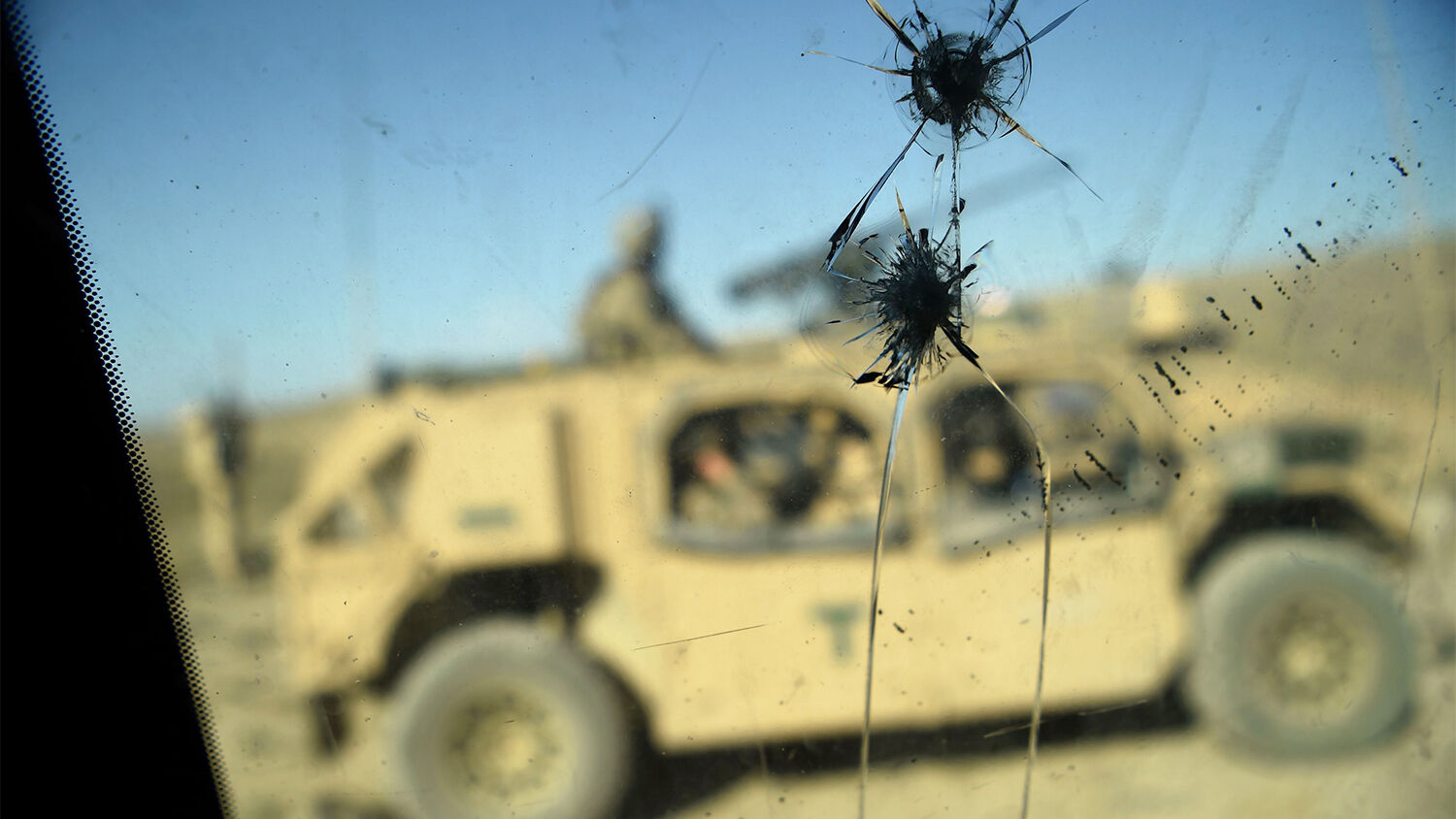 U.S. Army soldiers from nato are seen through a cracked window of an armed vehicle in a checkpoint during a patrol against Islamic State militants at the Deh Bala district in the eastern province of Nangarhar Province on July 7, 2018. A U.S. soldier was killed and two others wounded in an “apparent insider attack” in southern Afghanistan on July 8, nato said.
WAKIL KOHSAR/AFP/Getty Images

To counteract one Islamist enemy, the U.S. negotiates with another: the Taliban.

The Islamic State is growing more powerful in northeastern Afghanistan, according to locally based American intelligence officials, Associated Press reported on June 10.

Although driven out of Syria and Iraq, the Islamic State appears to be growing stronger by absorbing new recruits into its strongholds located in Afghanistan’s mountainous eastern provinces of Nangarhar and Kunar, on the border with Pakistan.

“The bad news is their acquisition of key terrain, height concealment, where they can have easy access to money, weapons, equipment … and from where they can plan, train, stage, facilitate and expedite attacks,” an American intelligence official stationed in the area told AP.

The Islamic State’s presence in Afghanistan has grown relatively unchecked since 2015, when it absorbed thousands of recruits from the Islamic Movement of Uzbekistan, along with smaller contingents from Chechnya, India, Bangladesh and various Arab nations. Chinese Uighur Muslims also tend to join the Islamic State in Afghanistan, likely because of its proximity to China and the relative ease of traveling through the neighboring countries.

When the Islamic State in Afghanistan looks for recruits to commit terror attacks abroad, it does not look to its most experienced and battle-hardened veterans, but to Afghani students. Recruiters are active at universities throughout the country, where they are more likely to find people familiar with traveling abroad and more competent with things like social media. These recruits are used to plan and organize more complex and effective terrorist attacks on the West.

American intelligence has already issued a warning about the capabilities of the Islamic State in Afghanistan: If left unchecked, the terrorists will be able to carry out large-scale attacks in the United States and Europe within the next year.

Eight arrests have been made in the U.S. of terrorists with links to the group. Martin Azizi-Yarand, a Texas resident who plotted to attack a mall in 2018, claimed to be acting under inspiration from the Islamic State’s Afghanistan group. In Europe, a Uzbek man with links to the group was arrested in 2017 for driving a truck into a crowd. He justified his actions by saying, “This is my commander in Afghanistan, and he is telling me what to do,” according to U.S. officials interviewed by AP.

New: This morning we’re releasing our snapshot of international terrorism arrests and court proceedings for the last month. pic.twitter.com/e29K62TFyy

Nearly 18 years ago, American soldiers were fighting the Taliban in the same mountains that are currently held by Islamic State fighters. Today, America’s leadership is considering a solution that involves negotiating with the lesser of two evils, the Taliban, to combat what it views as a more dangerous and capable group of jihadists.

The U.S. has been in negotiations with the Taliban in recent months in an attempt to make a deal in which the Taliban would help to combat the Islamic State in exchange for an American withdrawal. Bringing the Taliban into the government of Afghanistan is being discussed as a reasonable alternative for stopping the Islamic State from using the country as a base for terrorist attacks around the world.

As with any negotiations with terrorists, there are trade-offs. The prospect of a U.S.-Taliban deal has already driven some of the more radical Taliban fighters to switch allegiance and join the Islamic State. This has the potential to undermine the effectiveness of America’s proposed alliance with the Taliban.

However, the U.S. may be ignoring a bigger problem with its proposed alliance. The Islamic State, the Taliban, Uighurs, Chechens and all other Islamist terrorists generally have one ideal in common: They hate the West. Their ultimate goal is to undermine, wear down, and ultimately overthrow the world order promoted by Western nations like the United States.

One of the primary supporters and exporters of terrorism worldwide is Iran, especially its Islamic Revolutionary Guard Corps, which U.S. President Donald Trump recently designated as a foreign terrorist organization. Iran, through its proxies, is more responsible than any other nation for spreading terrorism around the world. It is a blatantly anti-Western regime possessing the Middle East’s largest arsenal of ballistic missiles.

Believe it or not, the existence of a terror-sponsoring nation opposed to Europe and the U.S. was predicted far before Iran became the champion of radical Islam in 1979. The Bible prophesied of Iran’s leadership of radical Islam, called “the king of the south.” You can prove from the Scriptures that this refers to the nation of Iran today. (Read our free booklet The King of the South by Trumpet editor in chief Gerald Flurry.)

In “Three Ways to Identify the ‘King of the South’ of Bible Prophecy,” the Trumpet wrote, “Iran has achieved its objective of becoming the most belligerent and imperialistic nation in the Middle East.” Regarding Iran’s aggressive use of proxy war and support for terrorism, we wrote, “perhaps the best way to characterize its foreign policy is pushy. And that is exactly how Daniel 11:40 describes the aggression of the king of the south. Iran has appointed itself kingpin of radical Islamism, the mortal enemy of the West, and the head of the terrorist snake.”

The rise of the Islamic State may seem disconnected from Iran because of the stark divide between Sunni Islam and Shiite Islam. However, you need to be watching Iran. Both sects are united by an extreme hatred for the West and the world order that it has imposed. And Iran, with its pushy foreign policy and numerous proxies, is the main catalyst soon to ignite a war against Europe—which the Bible says it will lose, disastrously.

Iran’s push against the West, and Europe in particular, will result in the strengthening of Europe and its extremely powerful, but temporary, unification. In the short term, all these events lead to war.

Bible prophecy, however, is not only about war and destruction—it shows how all these events are part of God’s plan.

As terrorist groups gain a greater hold on Afghanistan, and the U.S. attempts to negotiate with those who hate it, these prophecies are building toward fulfillment. To prove for yourself that Iran is the king of the south and that radical Islam is on a deadly collision course with the West, request your free copy of The King of the South, by Gerald Flurry.