Compare the news to the Bible, and you’ll realize this power bloc is making its move right now. 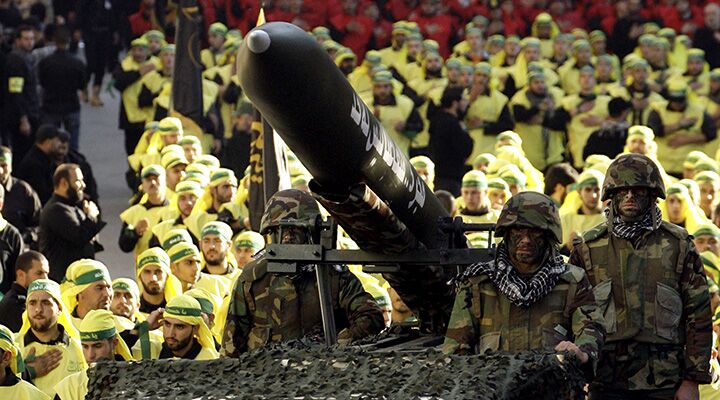 Compare the news to the Bible, and you’ll realize this power bloc is making its move right now.
From The April 2015 Philadelphia Trumpet
View Issue FREE Subscription

Why does so much tension and violence trace back to the Middle East? Why can’t Jews and their Muslim neighbors have peace? Why has radical Islam swollen into such a global menace? Why is this region a volatile threat to the rest of the world?

All of these questions point to a common answer.

Would you believe that an accurate identification of the real cause appears in the Bible?

About 2,500 years ago, the Prophet Daniel recorded an extensive description of the major powers that would dominate this region. Then, over the course of four centuries, that description came to pass—in detail.

But there’s something else. Part of Daniel’s astonishing prophecy remains to be fulfilled “at the time of the end.” Compare what the Bible forecasted with history and with current events, and you’ll realize that this end-time period is the modern era we live in now!

Daniel 11 contains the main passage: “And at the time of the end shall the king of the south push at him: and the king of the north shall come against him like a whirlwind, with chariots, and with horsemen, and with many ships; and he shall enter into the countries, and shall overflow and pass over. He shall enter also into the glorious land, and many countries shall be overthrown: but these shall escape out of his hand, even Edom, and Moab, and the chief of the children of Ammon. He shall stretch forth his hand also upon the countries: and the land of Egypt shall not escape. But he shall have power over the treasures of gold and of silver, and over all the precious things of Egypt: and the Libyans and the Ethiopians shall be at his steps” (verses 40-43).

To prove the identity of the king of the north, request Germany and the Holy Roman Empire. This free booklet shows you where to look in the Bible, in history and in current events for the modern fulfillment of this power bloc. The modern-day king of the north is the developing German and Vatican-led European superpower.

The other big question is, who is this “king of the south”?

This prophecy discusses the location of this “king”: It is a Middle Eastern regional power. It also notes its alliances: The king of the south allies itself in some way with Egypt, Libya and Ethiopia—countries all recognizable by the same names today. The prophecy also shows the king of the south is aggressive enough to cause another major power to react against it with violence.

This prophesied king of the south is radical Islam, led by Iran!

Trumpet editor in chief Gerald Flurry first made this connection in 1994, just six years after Iran emerged from its devastating eight-year war with Iraq—a time when few paid any attention to this rogue Islamist nation. But Mr. Flurry based his identification on the Bible, and that perception has been more firmly proven with every passing month.

The prophesied king of the south is a power that has a pushy foreign policy; rules an area located south of the Holy Land and south of the king of the north; allies with Egypt, Libya and Ethiopia; and excludes Turkey, Saudi Arabia, Jordan, Syria and Lebanon.

When you carefully analyze world events and compare them to the prophecies of the end-time that are scattered throughout Bible, you can piece together the truth about whether there is, in fact, a modern king of the south—and who that king is.

More and more, it is becoming undeniably clear that the king of the south is Iran!

When you understand Iran’s biblical identity, many of the confusing events in the chaotic Middle East become understandable. You can see how Iran is aggressively disrupting any peace and assembling an alliance based on radical religion. You can see how it is challenging the West. You can see how it will ultimately provoke a much more aggressive power to its north. You can see why the Iranians are pushing so hard for nuclear weapons, and you can even see how other Muslim nations that are fearful of Iran are already seeking alliances with European nations.

This is just the beginning of Iran’s role in end-time climactic world events. To understand more about Daniel’s prophecy and about the past, present and immediate future of Iran, read Gerald Flurry’s free booklet The King of the South.

1. Iran is the king of radical Islam

Since 1994, Iran has dominated headlines and destabilized the Middle East more than any other power. How? By leveraging its influence over violent Islamic extremism.

Iran’s takeover of radical Islam dates to 1979, when Islamists overthrew the shah of Iran and developed the country into the world’s largest state sponsor of terrorism. In the name of Islamic fundamentalism, Iranian leaders have sponsored abductions, assassinations, bombings and other acts of violence against soldiers, police and thousands of civilian men, women and children. They have supported terrorists from Hezbollah, Hamas, Palestine Islamic Jihad, the Taliban and al Qaeda, as well as Shia militants who attacked American and coalition troops in Iraq thousands of times. Iran also propped up the regime of Bashar Assad in Syria, who has waged a civil war against revolutionaries resulting in the deaths of tens of thousands of Syrian civilians. Iran has provided money, weapons, training and protection to terrorists and supported uprisings, coups and other violence in Iraq, Egypt, Libya, Ethiopia, Algeria, Afghanistan, Yemen, Saudi Arabia, Bahrain, Lebanon, Syria, Israel, Kenya, Mali, Somalia, Tanzania, Sri Lanka, India, Georgia, Azerbaijan, Bulgaria, Germany, Thailand, Malaysia and Argentina.

Iran has achieved its objective of becoming the most belligerent and imperialistic nation in the Middle East. Perhaps the best way to characterize its foreign policy is pushy. And that is exactly how Daniel 11:40 describes the aggression of the king of the south. Iran has appointed itself kingpin of radical Islamism, the mortal enemy of the West, and the head of the terrorist snake. Now it is racing to construct nuclear weapons.

Even an objective look at the map today reveals that no power south of Europe has more potency than radical Islam, led by Iran.

2. Iran and its allies are located to the south

The ancient fulfillment of Daniel’s prophecy of the king of the south corresponded to the Ptolemaic Kingdom located in Egypt, south of Jerusalem and the Holy Land. The king of the north was the Seleucid Kingdom located in the territory north and east of the Holy Land. But like many biblical prophecies that have a dual application, much of this prophecy in Daniel applies not only to those ancient fulfillments, but also to a far more important modern fulfillment.

Today, Iran’s radical Islamist alliance is forming around Iraq, Libya, Lebanon, Yemen, Ethiopia, Egypt and part of Sudan. While some of this territory lies east of the Holy Land, most of it is located to the south. The Bible calls this power the king of the south, and Iran already strongly influences or is allied with these nations south of Israel. And more generally speaking, all of these countries lie south of the king of the north,

3. Bible prophecy eliminates every other possibility

Egypt has recently experienced considerable political and social turmoil. But under the brief leadership of the Muslim Brotherhood, Cairo grew much closer to the

Iranians. Though it enjoyed a fairly strong relationship with former Egyptian President Hosni Mubarak, Washington has alienated Egypt’s new military rulers. Watch for radical Islam to continue to spread among Egyptians and for the nation as a whole to ultimately ally with the Iranians.

But what about the other nations in the Middle East? So far we have not covered such major powers as Saudi Arabia or Turkey.

The Bible contains another key prophecy that reveals what these powers will do in the latter days, during the same period that the king of the south is pushing against the king of the north.

Psalm 83 describes a mysterious end-time alliance that forms to destroy the modern descendants of Israel. Verses 6-7 list several Middle Eastern nations that do not ally with the king of the south, but instead with the European king of the north. Tracing the names of these ancient lands mentioned in Psalm 83 to their modern equivalents, you find that Edom is Turkey, the Ishmaelites are Saudi Arabia, Moab and Ammon are both Jordan, the Hagarenes are located in Syria, and Gebal is Lebanon. No alliance composed of the powers listed in this prophecy has ever existed in history. Putting the prophetic pieces together, we see that this alliance will actually form after the king of the north destroys the king of the south. So none of these nations can be the king of the south.