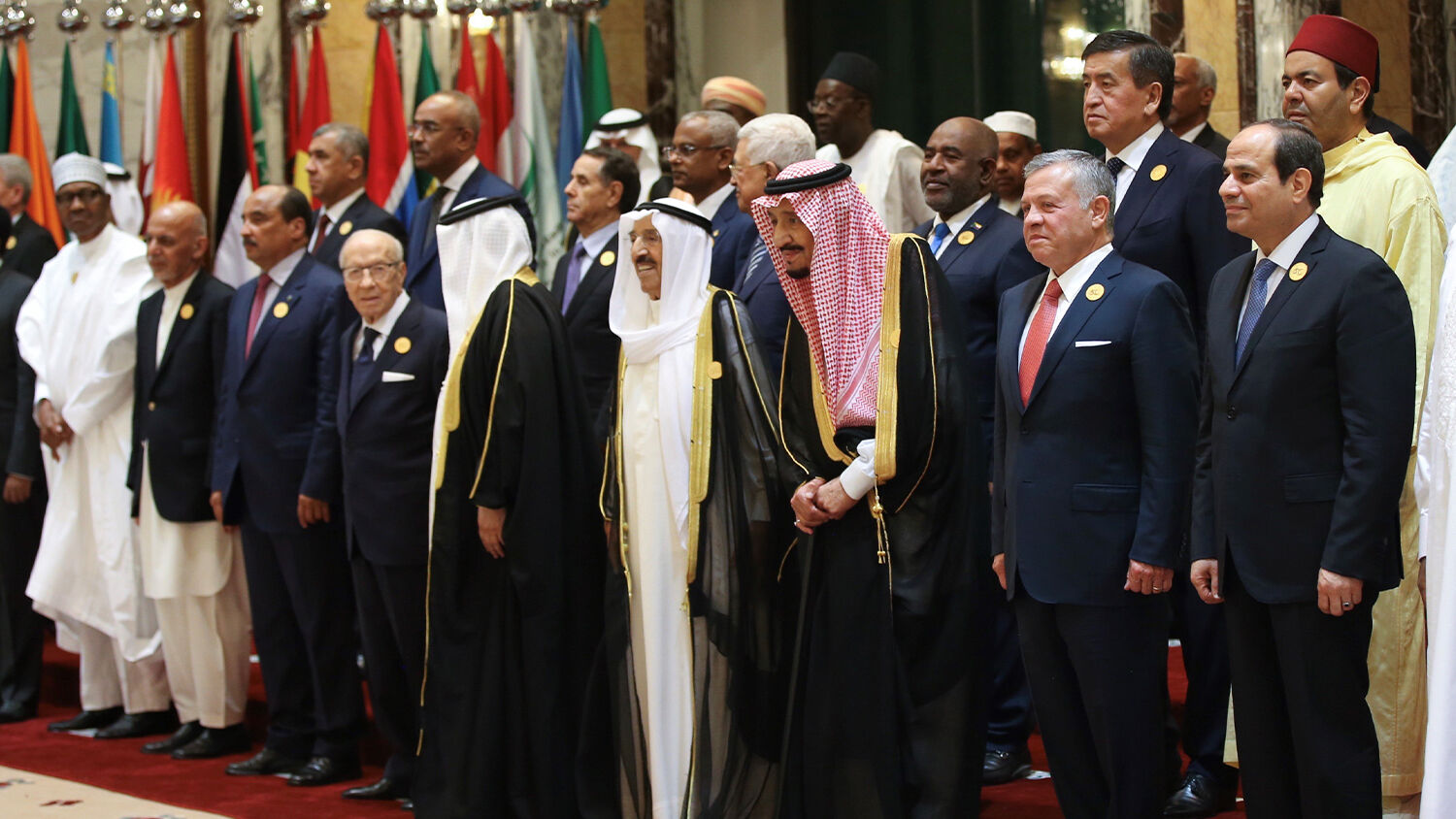 Major Arab nations are speaking out against Iran.

Saudi Arabia hosted three summits over the weekend of May 30 and 31 to address rising tensions with Iran.

Specifically, the meetings were called in response to recent attacks on oil infrastructure and transportation. The first attack occurred on May 12 near the Strait of Hormuz, where four oil tankers were targeted. The tankers belonged to Norway, Saudi Arabia and the United Arab Emirates.

The second attack, which happened on May 14, was on the East-West pipeline of Saudi Arabian state-owned oil company Saudi Aramco. It caused minor damage—but sent a major message.

According to United States intelligence reports and Arab accusations, the attacks were approved by Iran and carried out by its terrorist proxies in the region, such as the Houthis.

At the beginning of the summits, Saudi King Salman called for the nations to do whatever is needed “to stop the Iranian regime from interfering in the internal affairs of other countries.” He condemned Iran’s practices of “harboring global and regional terrorist entities and threatening international waterways.”

The weekend’s meetings were held in Mecca, Islam’s holiest city, and included conferences for the Organization of Islamic Cooperation (which has 57 members from the Middle East, North Africa, Oceania and more), the 22-nation Arab League, and the six-member Gulf Cooperation Council.

Significantly, Qatari representatives attended the summits, marking the first time that officials from Qatar have visited Saudi Arabia since the Gulf diplomatic crisis began in 2017. Two years ago, fellow Gulf Cooperation Council members Saudi Arabia, the U.A.E. and Bahrain, along with Egypt and others, cut off diplomatic relations with Qatar and enacted an air, land and sea blockade over the nation’s relationships with Iran and terror groups connected to Iran.

The Saudis hoped that the meetings would encourage Qatar to reconsider its relationships. The results, however, show that they failed in this particular goal.

In order to deal with the effects of the diplomatic and economic crisis on its hands, Qatar has not turned away from Iran, but rather reinforced its ties. In the midst of the embargo, Iran has even provided relief aid to Qatar. Qatari Foreign Minister Sheikh Mohammed bin Abdulrahman al-Thani, who attended the summits, confirmed that his nation’s stance on Iran has not budged. “The statements,” al-Thani said of the meetings, “condemned Iran but did not refer to a moderate policy to speak with Tehran.”

He added that the consensus of the nations at the meetings was to adopt “Washington’s policy towards Iran and not one that takes the neighborhood into consideration.”

Saudi Foreign Minister Ibrahim al-Assaf claimed that relations could have been restored between his nation and Qatar if the latter had taken the “right path” of leaving Iran’s influence. But al-Thani questioned this call for unity, saying, “The Gulf summit statement talked about a unified Gulf, but where is it amid the continuation of Qatar’s blockade?”

Saudi Arabia’s hostilities with Iran and its row with Qatar are significant in light of a trend that the Trumpet watches closely. This trend is the formation of the Psalm 83 alliance.

“The tabernacles of Edom, and the Ishmaelites; of Moab, and the Hagarenes; Gebal, and Ammon, and Amalek; the Philistines with the inhabitants of Tyre; Assur also is joined with them …” (Psalm 83:6-8). This is a prophecy of an alliance that will form in just a few short years—even now, it is in its beginning stages. Of course, today we do not have any nations called Edom, Moab, Gebal, Assur, etc, but looking into the origins of modern nations, we can trace who these ancient names represent today:

Notice that these Middle Eastern nations are allied with Germany. This is important because the Psalm 83 alliance relates to another prophecy, found in the book of Daniel. “And at the time of the end shall the king of the south push at him: and the king of the north shall come against him like a whirlwind, with chariots, and with horsemen, and with many ships; and he shall enter into the countries, and shall overflow and pass over. He shall enter also into the glorious land, and many countries shall be overthrown: but these shall escape out of his hand, even Edom, and Moab, and the chief of the children of Ammon. He shall stretch forth his hand also upon the countries: and the land of Egypt shall not escape. But he shall have power over the treasures of gold and of silver, and over all the precious things of Egypt: and the Libyans and the Ethiopians shall be at his steps” (Daniel 11:40-43).

Edom (Turkey) and Moab and Ammon (Jordan) are mentioned in this passage: “but these shall escape out of his hand, even Edom, and Moab, and the chief of the children of Ammon.” Notice that when the king of the north attacks the king of the south, Turkey and Jordan will escape. Why? Because they are allied with Germany, as prophesied in Psalm 83.

But Egypt, Libya and Ethiopia will be conquered: “the land of Egypt shall not escape … and the Libyans and the Ethiopians shall be at his steps.” These nations are not mentioned in the Psalm 83 alliance. They are in the Iranian camp. Daniel 11 and Psalm 83 align perfectly.

Verses 6-8 of Psalm 83 list the nations of this Middle Eastern-European alliance, but verses 1-5 show the context of why the alliance is formed to begin with. As hostile toward the king of the south as these nations are, their true goal is much more sinister than just the destruction of Iran.

“Keep not thou silence, O God: hold not thy peace, and be not still, O God. For, lo, thine enemies make a tumult: and they that hate thee have lifted up the head. They have taken crafty counsel against thy people, and consulted against thy hidden ones. They have said, Come, and let us cut them off from being a nation; that the name of Israel may be no more in remembrance. For they have consulted together with one consent: they are confederate against thee” (verses 1-5).

In this prophecy, “Israel” refers to more than just the Jewish nation in the Middle East currently bearing that name. The end-time nations of Israel consist principally of the United States, the United Kingdom and Israel in the Middle East. (Read our free book The United States and Britain in Prophecy, by Herbert W. Armstrong, for proof.) Germany and its allies in the Middle East will conspire against the modern-day nations of Israel, and they will be used to punish them for their sins. This is all leading to the destruction of America, Britain and Israel; it is a crucial part of Bible prophecy that you need to watch!

The nations of the Psalm 83 alliance wish to wipe out of existence even the names of America, Britain and Israel! Some of these nations may not seem hostile toward the U.S. at the moment, but that does not negate this Bible prophecy.

But in the end, we can expect this profitable relationship to turn sour.

Writing for Bloomberg, Bobby Ghosh makes the point that the biggest loser from the row that has developed between Saudi Arabia and Qatar is, in fact, America. “The only country seriously inconvenienced by the [Gulf Cooperation Council] split is the U.S. Indeed, the White House would like to see the gcc countries, along with Egypt and Jordan, form an ‘Arab nato’ to man the watchtowers against Iran’s Islamic Republic.”

The Arab nations listed in Psalm 83—most of which stood in solidarity with Saudi Arabia during the recent summits—will form an “Arab nato,” but in the end, it will not be directed nor influenced by America. It will be purposed to destroy America, and Germany will be at the head.

This is sobering, but there is hope in the end! Bible prophecy does not end with the nations of Israel in ruins. Trumpet editor in chief Gerald Flurry writes about Israel’s incredibly bright future in his free booklet Great Again:

God promises that there is real hope in America’s end! The same Bible that prophesied America’s fall also prophesies that its brightest days are yet to come! …

When God chose the biblical nation of Israel, He intended it to be an example and a blessing to all nations, leading them into a relationship with Him (read passages like Deuteronomy 4:5-8). Though that nation failed, the goal that God had for Israel anciently is still one He intends to accomplish. God still wants Israel’s descendants to fulfill the glorious purpose of serving as a shining example to the world! And one day soon, they will be! …

Jeremiah 33 also depicts the time after America and Britain have endured the Tribulation. God promises to restore prosperity to them and make them a positive example. They will become “a praise and an honour before all the nations of the earth, which shall hear all the good that I do unto them: and they shall fear and tremble for all the goodness and for all the prosperity that I procure unto it” (verse 9). Yes, people will be moved to worship God at His outpouring of generosity and love toward these nations!

Yes, America, Britain and Israel face a grim fate in the immediate future. But beyond that—once the people of Israel repent of their sinful ways and turn to God—God has an extremely bright, prosperous, joyful future in store for them, and for the whole world!