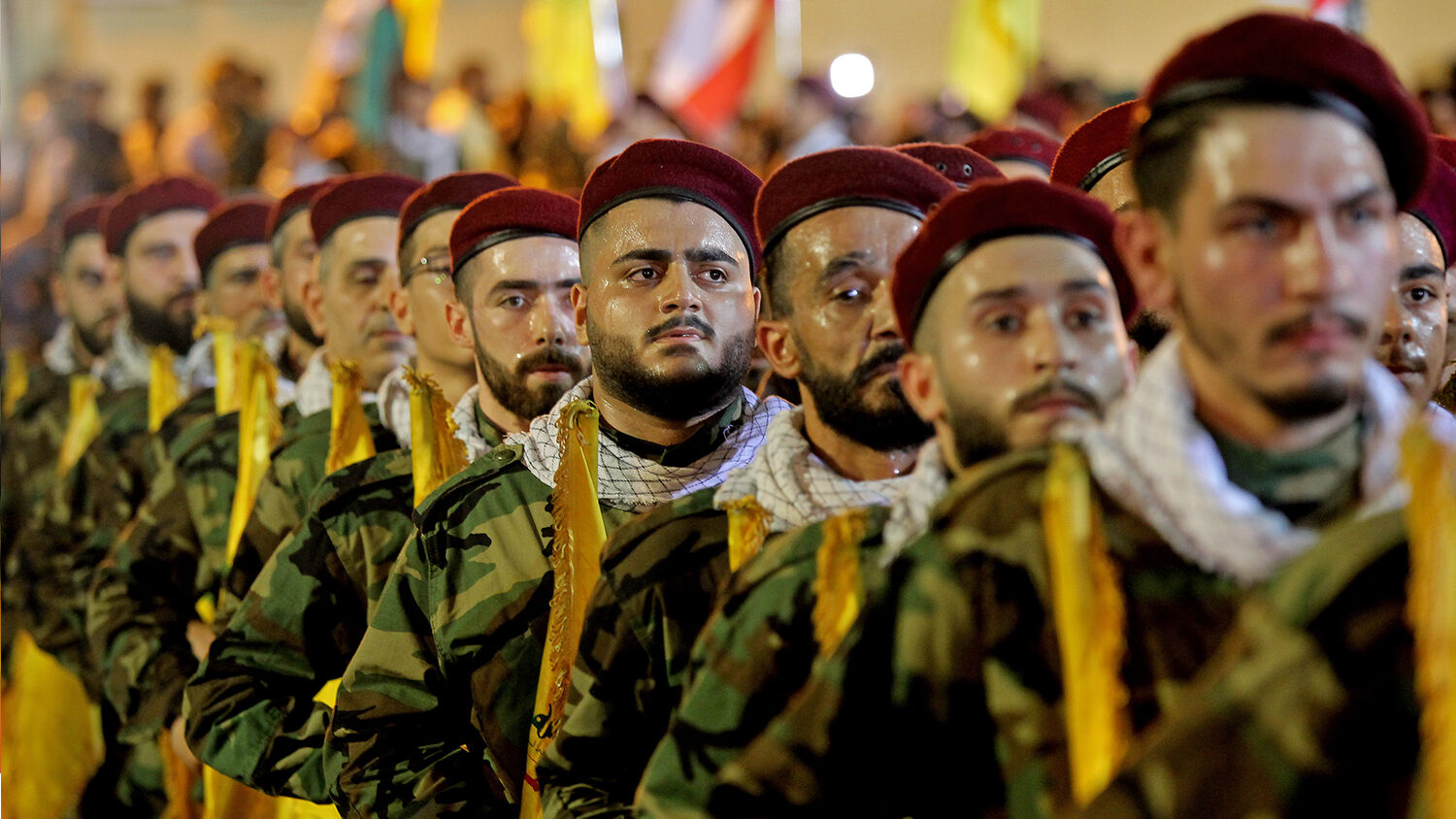 Pro-Iranian Hezbollah fighters take part in a parade to mark the annual al-Quds Day on the last Friday of the Muslim holy month of Ramadan.
Marwan Naamani/picture alliance via Getty Images

Many reports indicate Hezbollah is running out of funds. United States President Donald Trump is waging financial warfare against Iran and its terrorist network. Hezbollah, Iran’s terrorist proxy in Lebanon, is receiving the brunt of the attack as the Trump administration works to pry it away from Iran.

Hezbollah receives $700 million in annual funding from Iran, accounting for 70 percent of its annual revenue. It needs Iranian cash to survive.

The majority of this funding comes from Iran’s oil industry. In 2017, crude petroleum made up about 72 percent of Iran’s trade exports. However, Iran’s crude oil production this May fell to its lowest levels in nearly 30 years.

Reuters oil tanker tracking data shows that Iranian crude exports in May fell to around 400,000 barrels per day. That means Iran is exporting less than 20 percent of what it was exporting in April of last year. That was the month before President Trump withdrew from the Iran nuclear deal and began reimposing financial sanctions against Iran.

In November 2018, President Trump imposed a number of hard-hitting sanctions on Iran, most notably its crucial oil sector. The president declared that those who purchase oil from Iran must cut all crude oil imports from Iran. To avoid shocking the oil market, President Trump granted eight nations a six-month oil trade extension.

On May 2, the U.S. ended trade waivers and began fully enforcing sanctions. Of the eight waivers given out, only Turkey and China publicly announced their desire to continue Iranian crude purchases; though it seems Turkey may cave in to U.S. demands. Whether the Trump administration will allow China—the largest importer of Iranian oil—to continue importing has yet to be seen. However, the administration has stated that the waivers will not be extended.

#China imported 613,000 barrels of Iranian #oil per day in March via @Bloomberghttps://t.co/459a6JcEkr pic.twitter.com/kfsxVXGHzn

Hezbollah is designated as a Foreign Terrorist Organization by the U.S. In 2018 alone, the U.S. Treasury Department added over 30 Hezbollah-related sanctions. As a result, Hezbollah is under significant financial strain.

According to Ynetnews, monthly cash shipments from Iran have already been cut in half.

This year, Hezbollah cut salaries for its fighters for the first time. Some of its militiamen have only received two thirds of their usual pay in the past three months. It has laid off half of its reserve fighters because it can’t keep up with paychecks. Reports indicate Hezbollah is selling off property and reducing aid to its fighters. It is also laying off staff and reducing pay to workers of its al-Manar television network and al-Nour radio station.

To survive, Hezbollah will have to look elsewhere for support.

For the first time since its inception 37 years ago, Hezbollah’s leader, Hassan Nasrallah, has appealed for donations in a public address in March.

In response, the Houthi-run radio station called on its listeners to support Hezbollah. The donations are funneled through one of its many social welfare institutions. Senior analyst for the Arabia Foundation Fatima Abo Alasrar said that, in the past month, the campaign raised $120,000. Houthi-run Saba News Agency said the fundraising efforts will “have a significant impact in strengthening the Axis of Resistance,” referring to Iran’s proxy network.

The Trump administration’s sanctions against Iran and its proxies are working, but their dedication is proving resilient. While U.S. sanctions are delaying this Islamic terrorist alliance’s rise, it may only be temporary.

Under the Trump administration, the U.S. is moving toward a more isolationist foreign policy. On Dec. 19, 2018, President Trump announced America’s withdrawal from Syria. Though he has compromised on his plan due to public backlash, it shows the mindset that America is in retreat.

Daniel 11:40-43 describe an end-time clash between two power blocs, a modern Islamic alliance (“the king of the south”) and a German-led European power (“the king of the north”). The Islamic alliance will include Ethiopia, Egypt and Libya and will be led by Iran. Lebanon is not part of this alliance. Instead, Bible prophecy indicates it will be part of an anti-Iranian confederation of Arab nations (Psalm 83:6-8).

This could happen by either of two ways: Hezbollah decides to break from Iran or it loses power in Lebanon. Hezbollah’s current military and political power mean that the only way Lebanon could join an anti-Iran alliance is if it had Hezbollah’s support or if it gained control over Hezbollah. The U.S. could have a large part in bringing about this transfer of power.

The U.S. is working hard to specifically target Hezbollah and pry it away from Iran. Hezbollah may either give in or collapse as economic pressure intensifies. Alternatively, if Hezbollah’s resolve proves unbreakable, the U.S. may be forced into military confrontation. If it comes to open conflict with Hezbollah, the U.S. would likely make use of the Lebanese Armed Forces (laf). The U.S. is the laf’s number one supporter, providing it about $222 million annually. However, since Iran gave Hezbollah $700 million before it was sanctioned, that means Iran was outspending the U.S. roughly 3 to 1 in Lebanon. Even if Iranian funding is halved, it will still be outspending the U.S. Hezbollah has a fighting force about half the size of the laf, but with more funding. America would have to considerably increase its financial support.

FACT: The United States has provided nearly $1.7 billion to the Lebanese Armed Forces #LAF and over $160 million to the #Lebanon Internal Security Forces #ISF since 2006- https://t.co/O4Fcy5lEpP pic.twitter.com/aZQg1WZgmp

Whether the U.S. will be successful in tearing down Hezbollah’s power in Lebanon remains uncertain. But if it doesn’t, another power will.

Europe, primarily France and Germany, are increasingly becoming more involved in the Middle East. After the U.S., Germany is the second-largest financial supporter of Lebanon. France also supports Lebanon financially and militarily. These two nations may become a significant impediment to Iranian influence in the region.

Historically, Lebanon has been the Christian center in the Middle East. Today, 40 percent of Lebanon’s population still belongs to a Christian denomination. This will be the linchpin factor for Europe’s involvement in Lebanon. Iran wants to reposition itself to push the Christians out of power in the Lebanese government. Europe will not allow that to happen.

In “Why You Need to Watch Lebanon,” Trumpet editor in chief Gerald Flurry wrote, “Europe coming into the Middle East is going to infuriate Iran. And it is such European intrusion that will cause Iran to push at the king of the north.” Iran will attack Europe with a lot of force, but that attack will lead to Iran’s destruction.

U.S. sanctions are crippling Iran’s economy and slowing the rise of this Islamic nation. However, it is also increasing tension. Eventually, the Middle East will explode into war. For more information, please read “Why You Need to Watch Lebanon.”