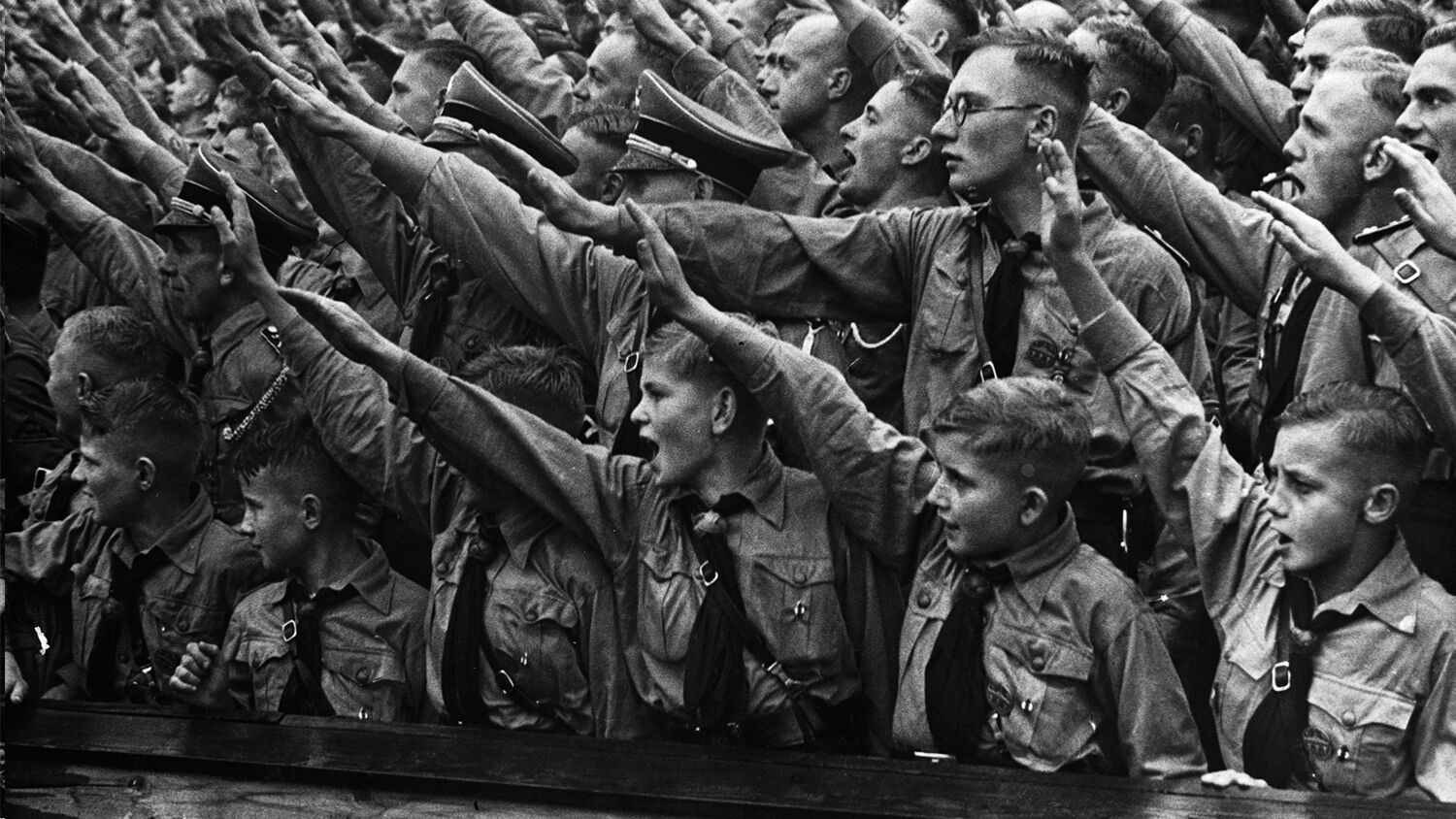 Hitler Youth salute as they listen to a speech by Adolf Hitler at a rally in the Nuremberg Stadium in Germany in 1937.
Getty Images

Mainstream media realize that Germany denazifying itself was fake news.

A New York Times opinion piece published on April 15 asked: “Has Germany Forgotten the Lessons of the Nazis?” Author Paul Hockenos recounted how Germany’s “culture of remembrance is crumbling.” Hockenos believes that due to a lack of remembrance, we are seeing history repeat itself. But it’s worse than that—Germany never learned its lessons from the Nazis to begin with. Nazism has never died in Germany.

After Germany’s reunification in 1990, Hockenos noted, the country was praised as “the moral leader of continental Europe.” Fears that “a united country would resurrect the horrors” of the past seemed forgotten. But events of recent years now question this false hope.

We have seen the dramatic rise of a far-right party that gained 13 percent of the vote in the last election. We have seen the rise of xenophobia and refugee centers set ablaze. In 2016, the Interior Ministry recorded 3,533 attacks against refugees in Germany. Anti-Semitism has also made a comeback as anti-Semitic crimes increased 10 percent and violent attacks increased 60 percent from 2017 to 2018.

Nazi scandals in Germany’s military corps made headlines in 2016 and 2017. Forty percent of German youth say they know very little or nothing about the Holocaust. Another dictator would not be greatly opposed in today’s Germany, as 40 percent of Germans said they could see themselves under an authoritarian regime.

If you don’t abhor the evils of the past, nothing will stop you from repeating the same mistakes.

“We were so sure that we’d learned our lesson, and what is not allowed cannot happen. We thought serious anti-Semitism was the past. But now we’re rethinking things,” said Andreas Eberhardt, director of the German government organization Remembrance, Responsibility and Future.

Hockenos used the example of the Alternative für Deutschland (AfD) party to illustrate his concern:

The AfD gives cover to expanded expressions of intolerance and hate. In the Bundestag, the party’s members speak about foreigners, the Holocaust and Muslims in a way that a decade ago would have triggered a full-blown scandal—but that today is commonplace. They downplay the significance of the Nazi era, and demean efforts to reconcile with the past, like the Holocaust Memorial in Berlin. Popular tv shows and bestsellers set in the Nazi era treat Germans as victims, not perpetrators. At the same time, 40 percent of young Germans say they know very little or nothing about the Holocaust.

Recent polls suggest that the AfD is currently the most popular party in East Germany with 23 percent support.

AfD leader Alexander Gauland said on Sept. 2, 2017: “If the French are rightly proud of their emperor and the Britons of Nelson and Churchill, we have the right to be proud of the achievements of the German soldiers in two world wars.”

Another influential AfD leader, Björn Höcke, caused a stir in January 2017 when he told a cheering crowd that Germany should be proud of its history and make a “180-degree reversal on the politics of remembrance.” “German history is handled as rotten and made to look ridiculous,” he said, lamenting that Germans are “the only people in the world to plant a monument of shame in the heart of its capital.” The crowd responded enthusiastically, shouting: “Deutschland! Deutschland!”

Millions of Germans are now voting for this party, and thus again, openly and without shame, embracing a right-wing movement and even some Nazi ideologies. Accusing someone of being a Nazi today is scandalous, but less than 80 years ago it described the common people of Germany. German historian Norbert Frei said, “The clash over the Merkel government’s refugee policy was simply a welcome occasion to revitalize national-conservative and völkisch thinking that had been socially suppressed over decades but had never disappeared.”

This reemergence could never have happened if Germany had been truly denazified.

A national history of war and more than a decade of intense Nazi propaganda could not be wiped away with a few years of shallow “denazification” in the late 1940s. But just four years after the Allies handed the denazification process over to the Germans, the government officially ended denazification. Worse than that, for decades, many prominent Nazis were allowed to continue to propagate their ideology in politics, education and virtually every other branch of German society.

“New research shows that far fewer Nazis were brought to justice in the immediate postwar years than previously thought,” Hockenos commented. “Indeed, just as the ’60s-era students charged, former Nazis occupied many positions of authority—as teachers, judges, media professionals and even politicians—for many decades after the war, transmitting their values with them.”

Despite this, Hockenos wrote, “There’s no question that Germany’s efforts to overcome its past were sincere and largely effective. But they also came with their own blind spots.” He believes that these “blind spots” are now responsible for the sudden and frightening reemergence of a Nazi mentality. But that falls far short of the actual truth. This reemergence was planned and systematically executed by Nazis and their successors who worked underground. In “The Resurgence of Nazi Germany,” Trumpet executive editor Stephen Flurry summarized key findings of Nazi documents revealed in 1996, then he wrote:

How could the appalling evil and message of hate inspired by Adolf Hitler and the Nazi regime during World War ii ever resurface in this sophisticated age? World history and Bible prophecy should strike us like a bolt of lightning with the proper answer to that question! But man has not learned history’s lesson, and Bible prophecy is laughed to scorn.

Yet for those with an open mind, history and prophecy reveal where this modern-day resurgence of Germany is leading. The spirit and message of Hitler did not die when the war ended. It lives on. And soon, its ugly head will resurface to thrust this world into one final all-out battle before Christ returns (Matthew 24:21-22). …

We should have learned our lesson from the First World War—the war that was supposed to end all wars. But we didn’t. People shunned Winston Churchill in the years preceding World War ii, even calling him a warmonger. Yet true to Churchill’s prediction, the Nazi war machine set out to rule the world and destroy anything that happened to be in its path. If not for Churchill’s unyielding leadership, the Germans would have realized their goal.

Did the Germans and the rest of mankind finally learn the lesson?

For decades, the world believed that they did learn the lesson of World War ii. “But while Washington and London were promising that Germany would never again be able to strike, Herbert Armstrong was preaching to the whole world that Germany would rise again,” Mr. Flurry continued.

A prophecy in Revelation 17 led Mr. Armstrong to understand that attempts to prevent Germany’s reemergence would fail: “The beast that thou sawest was, and is not; and shall ascend out of the bottomless pit, and go into perdition: and they that dwell on the earth shall wonder …. And there are seven kings: five are fallen, and one is, and the other is not yet come; and when he cometh, he must continue a short space” (verses 8, 10).

This revelation is about the period when Mr. Armstrong, God’s end-time Elijah, was doing this work of God. … During World War ii, we saw the Hitler-Mussolini axis, but then it disappeared from the scene. It ‘was not’! And yet, God says, ‘it is’! The Axis powers lost the war, but as Mr. Armstrong preached time and again, they just went underground—into ‘the bottomless pit’ (verse 8). They’re still there—they’re just underground.

But now they are reemerging for everybody to see!

Mr. Armstrong died in 1986, and the Church that he founded stopped proclaiming God’s warning message. But God’s message to this world did not end! God raised up another church to continue the warning work: the Philadelphia Church of God that produces the Philadelphia Trumpet newsmagazine and this website. Even as the world celebrated Germany’s reunification, Mr. Flurry proclaimed in his book Malachi’s Message, first published in 1990, that it would end in a devastating World War iii.

Request a free copy of Germany and the Holy Roman Empire to learn how Nazi Germany went underground. This booklet also explains the prophetic importance of Germany’s rise. Without this crucial understanding, one cannot understand what is currently happening in Germany.