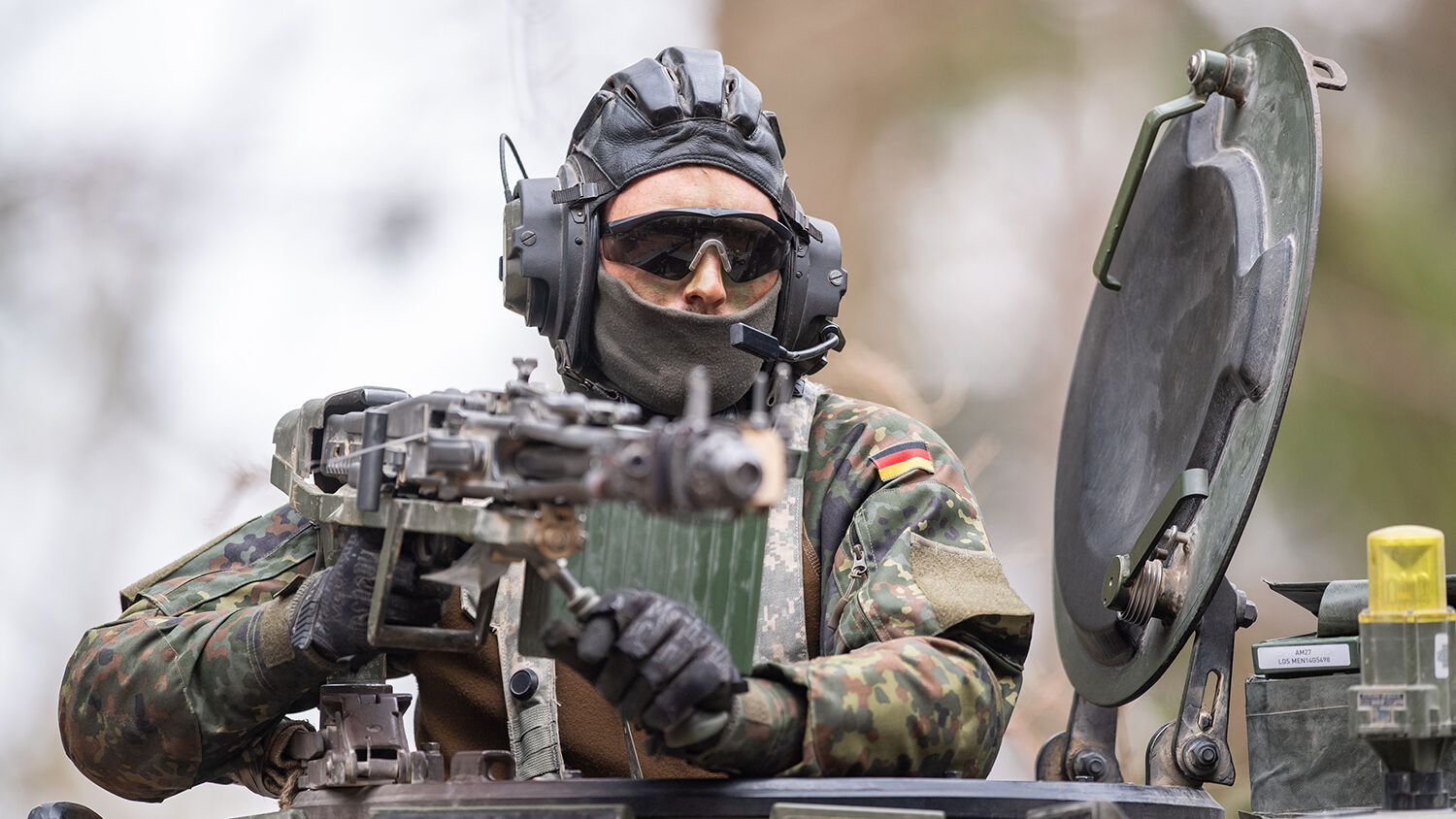 A soldier of the German Bundeswehr secures a Tactical Operations Center during the Allied Spirit X international military exercises at the U.S. 7th Army training center on April 9 near Hohenfels, Germany.
Getty Images

Retired German Brig. Gen. Erich Vad believes that Germany’s recent military failures are due to having “cowards and bureaucrats” in charge of the Army. This weekend, Vad appealed to the German people, advocating a drastic leadership change starting at the very top of the organization.

Bild am Sonntag, Germany’s most popular newspaper, published Vad’s criticism as its April 14 front-page story. The attack on von der Leyen adds to her disgrace before the German public. A recent survey showed that only 23 percent of Germans believe that she should lead Germany’s army.

Von der Leyen promised many trend reversals in the Bundeswehr’s staff and equipment. But the German public, media and Army officers are not convinced that her efforts are enough.

Some believe the Bundeswehr has to drastically increase its budget. But as Vad pointed out, money is not the issue. Israel operates a highly functional army with a third of Germany’s budget. Russia threatens the whole world with a budget comparable to Germany’s. But the German Army seems impotent.

If it’s not money, then what is the problem? Is it the fault of Germany’s weapons industry? In “Not Enough Soldiers, Defective Tanks and Planes: Is Our Bundeswehr a Junk Troop?” Bild wrote (Trumpet translation throughout):

How can it be that German armaments exports exist when our matériel is supposedly junk?

Our armaments are in demand worldwide: The U.S. Army shoots with pistols made by German weapons manufacturer Sig Sauer; the French Army relies on HK-416 rifles “Made in Germany.” But our Bundeswehr is using significantly older firearms.

The Israelis favor German submarines (the German Navy currently only has three functioning submarines). Saudi Arabia uses Tornado and Eurofighter to bombard rebel forces in Yemen—both combat aircraft are being developed and built, among others, by Germany.

German industry is producing world-class equipment. So, what’s wrong with Germany’s military? The problem, according to Vad, lies with its management: “The Bundeswehr is an over-bureaucratic mammoth agency or ‘company’—as the new Inspector General [Eberhard] Zorn once described our Bundeswehr.” Vad wrote:

The Bundeswehr has indeed a leadership problem! The military leadership culture is far removed from the actual purpose of the armed forces: its combat mission. …

All military aspects in this country are in any case under general suspicion. The focus is more on gender equality, day-care centers, flat screens and other civil society accessories in the Bundeswehr. The media rejoices over the occasional scandals in the Bundeswehr. The hate and glee are unmistakable. And the defense minister defends most of all herself and her political survival.

Germany’s military leadership tries everything to not seem militaristic. In an effort to become acceptable, Vad complains, the Army is taking itself apart. Only if it returns to a militaristic mindset can it become great again. Currently, though, this is nearly impossible; such a mindset is heavily restrained and viewed with “suspicion.”

It is exactly this suspicion that has kept the German Army from marching in its predecessors’ footsteps. It is dangerous to demand the removal of the restraining “over-bureaucratic mammoth agency,” because it could be replaced by dictatorial rule.

Zorn, who also lamented the Bundeswehr’s bureaucratic structure, announced on March 11 that Germany’s military readiness reports will, in the future, be classified as secret. But as the news broke, no one even seemed to be concerned or suspicious. The news media, politicians and the public joked that the Bundeswehr apparently wants to hide its failures. But if you understand what Zorn and Vad are demanding, this move should cause alarm.

High-ranking German military leaders know the terrifying potential of the Army. They want a change of leadership that will give them the power to make their army great again. Our April 2019 article “Forging a Superpower” explains how the German Army will suddenly rise once that leadership is in place. Beneath the shallow news reports of a weak German Army are soldiers and officers who groan for power!

Vad wants the entire leadership of the Bundeswehr to change: “I see here a fundamental, political problem: At the top of the Bundeswehr is a minister who wants to lead but above all has to defend herself.” Besides his criticism of von der Leyen, Vad also condemned the whole Army corps for acting as if the leadership doesn’t matter. The political leadership has to work “from top to bottom,” he concluded, for the Army to function properly.

The Bundeswehr’s leadership was under heavy criticism in 2017 but from quite a different angle. “The German Army has a posture problem, and apparently weak leadership on many levels,” von der Leyen said. She was not referring to a bureaucratic problem but a problem with right-wing extremism. In 2016 and 2017, the Army was under enormous pressure due to a resurfacing Nazi mentality among officers and repeated reports of right-wing crimes and scandals at all levels.

Could it be that those she opposed are now seeking to oust her? In the midst of the right-wing scandals, Spiegel Online wrote:

Armies are always thorny. They have the power of the weapon, the potential for a coup. They are a guarantor of the security of a state, but also a possible threat to the state. In soldiers’ souls, the readiness to be violent must be at the same time unleashed and tamed, which is, of course, an extremely difficult balance.

Germany’s army holds the power to overthrow politicians and suddenly become a threat to the state, just as it happened in Nazi Germany. Spiegel Online implied that this could happen again.

The late Herbert W. Armstrong, editor in chief of the Plain Truth newsmagazine, wrote in 1956: “The day that war ended, the Nazi organization went underground! Their plans for coming back have been proceeding, under cover, since 1945! Already Nazis are in many key positions—in German industry—in German education—in the new German Army!”

Germany’s army has Nazi sympathizers. That’s what Mr. Armstrong warned about one year after the German Army was formed, and that’s what concerns von der Leyen today!

Mr. Armstrong’s warning was read by millions, but the full truth of his statement was not understood until the 1990s. In his free booklet Germany and the Holy Roman Empire, Trumpet editor in chief Gerald Flurry explains how this Nazi movement went underground and how it is reemerging again. He details how this movement has been actively preparing for the third round. So far, it has been heavily restrained and is working under cover, but this will change soon.

Unless you understand Bible prophecy, you cannot understand the true significance of what is currently happening in Germany. To learn more about this Nazi underground movement in its prophetic context, request a free copy of Germany and the Holy Roman Empire and Who or What Is the Prophetic Beast?

Bible prophecy states that the underground Nazi movement will rise again. “The beast that thou sawest was, and is not; and shall ascend out of the bottomless pit, and go into perdition: and they that dwell on the earth shall wonder” (Revelation 17:8).

The beast, Germany’s militaristic empire, is prophesied to rise again!

Vad sees the weak political leadership, so he is stirring the rebellion against von der Leyen. In the meantime, he serves as a military expert and lecturer at the University of Munich and Salzburg. His lectures, public speeches and articles have contributed to the right-wing turn of future military leaders, as German-Foreign-Policy.com pointed out in its 2017 article “Right-wing Military Officers.”

The German Army is ready to take a new direction.

A German strongman is prophesied to lead Germany to once again become a military superpower that throws this world into World War iii. “And in the latter time of their kingdom, when the transgressors are come to the full, a king of fierce countenance, and understanding dark sentences, shall stand up. And his power shall be mighty, but not by his own power: and he shall destroy wonderfully, and shall prosper, and practise, and shall destroy the mighty and the holy people. And through his policy also he shall cause craft to prosper in his hand; and he shall magnify himself in his heart, and by peace shall destroy many: he shall also stand up against the Prince of princes; but he shall be broken without hand” (Daniel 8:23-25).

The Trumpet believes this prophecy could be fulfilled by the comeback of former Defense Minister Karl-Theodor zu Guttenberg. (Request a free copy of A Strong German Leader Is Imminent to learn more about this coming leader.)

The Nazi underground never died, and it is about to experience its greatest resurgence ever. But just as Daniel 8 and Revelation 17 expose this Nazi underground movement, they also point to the greatest hope this world has ever heard! Daniel 8:25 and Revelation 17:14 prophesy that Jesus Christ Himself will conquer this resurrected empire and put a stop to the evil that plagues this world.