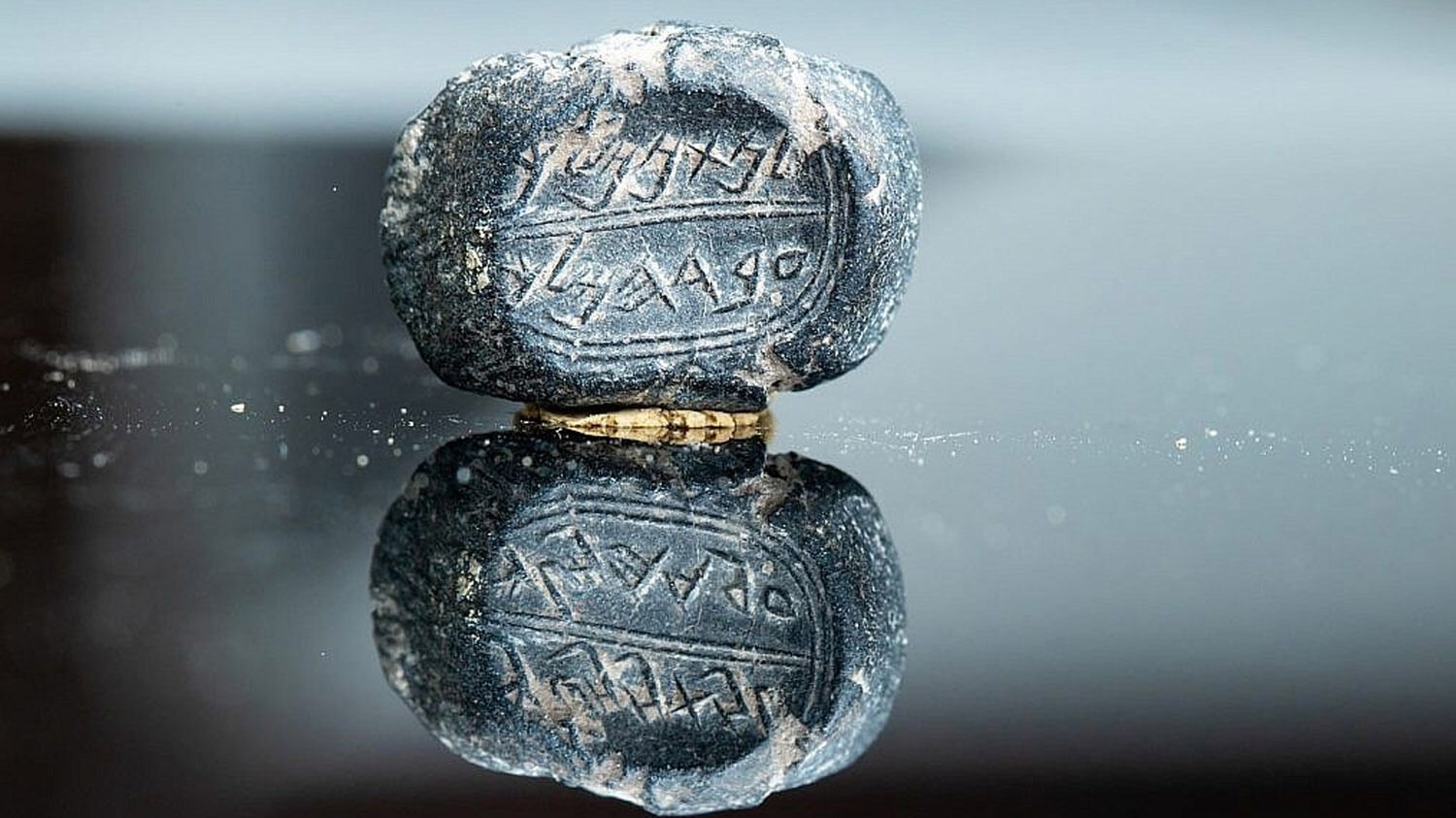 Two exciting new discoveries made during archaeological excavations in the City of David, Jerusalem, were released to the public on Sunday. The finds—a blue agate seal and a clay seal impression—are circa 2,600 years old and were uncovered by Israeli archaeologist Yuval Gadot’s team during the ongoing Givati Parking Lot excavation.

Of the two items announced in the Israel Antiquities Authority’s press release, the burnt clay seal impression has attracted the most interest. The inscription reads: “Belonging to Nathan-Melech, Servant of the King.” The name Nathan-Melech appears only once in the biblical account (2 Kings 23:11)—he was an official in King Josiah’s royal court. The bulla dates to the same time period (seventh century b.c.) and confirms the existence of this individual.

The verse in 2 Kings describes King Josiah’s purge of idolatry and reinstatement of true worship in Judah: “Then he removed the horses that the kings of Judah had dedicated to the sun, at the entrance to the house of the Lord, by the chamber of Nathan-Melech, the officer who was in the court; and he burned the chariots of the sun with fire” (2 Kings 23:11; New King James Version).

The bulla title of “servant,” eved, is different from the title expressed in the biblical text (saris, translated as “official,” “chamberlain” or “eunuch”). However, “servant” is a more generic label for an official, which would certainly cover the biblically described position of Nathan-Melech. It is also spelled with fewer Hebrew letters—an important consideration when carving a title onto a small seal-stamp.

Dr. Anat Mendel-Geberovich said that the lack of a surname on the bulla indicates this historical character was well known and of notable importance. This would also fit with the biblical figure, who was a high-ranking official of his day, and who also lacks a formal surname, or “son of,” attribution. The given name “Nathan-Melech” could have signified “Nathan of Melech.” 1 Chronicles 8:35 lists Melech as the great-grandson of Saul and brother to King Ahaz, who ruled in the eighth century b.c. Nathan-Melech could have received this name because he was a descendant of this same Melech.

A parallel seal impression to the Nathan-Melech seal had previously surfaced on the Antiquities Market (Deutsch, 1997). However, due to the fact that it is of unknown provenance, it could not be conclusively proved as authentic. The discovery of this new bulla in a controlled, scientific excavation proves the authenticity of the first and highlights the importance of finding artifacts in their historical context.

The other item released on Sunday, a blue stone seal, bears the inscription “Belonging to Ikar, son of Matanyahu.” The name Matanyahu (or Mattaniah) was used 16 times throughout the Hebrew Bible. Most significantly, it was the original name of King Zedekiah; his name was changed when King Nebuchadnezzar installed him as a puppet king (2 Kings 24:17). Considering that Zedekiah was an older man when he became king, and considering the dating of the seal (late seventh to early sixth century b.c.) and that it belonged to a high-ranking official, it is very possible that it refers to this same Zedekiah–Mattaniah—thus belonging to a son of the eventual king. If this is the case, then this potential heir met his grisly demise upon Nebuchadnezzar’s destruction of Jerusalem around 586 b.c.: “And they slew the sons of Zedekiah before his eyes, and put out the eyes of Zedekiah, and bound him with fetters of brass, and carried him to Babylon” (2 Kings 25:7).

(Many consider this to have been the end of the Judahite monarchy and of God’s promise to King David of an “everlasting throne.” This is not the case—the throne has continued. You can read more about it in our article “God Promised David an Everlasting Throne—What Happened to It?”)

Whether or not this is the same individual, the use of the names “Nathan,” “Nathan-Melech” and “Mattaniah” helps to prove the authenticity of inspired Scripture. For more information about how even generic names confirm the accuracy of the Bible, read our article “Biblical Names Confirmed Through Archaeology.”

In the Israel Antiquities Authority’s press release, Gadot said: “These artifacts attest to the highly developed system of administration in the kingdom of Judah and add considerable information to our understanding of the economic status of Jerusalem and its administrative system during the First Temple period, as well as personal information about the king’s closest officials and administrators who lived and worked in the city.”

The discovery of these items follows a number of other exciting bullae uncovered in Jerusalem by archaeologist Dr. Eilat Mazar—most recently, the bulla of Isaiah the Prophet (released in 2018), as well as the bullae of King Hezekiah and the princes Jehucal and Gedaliah (Jeremiah 38:1). Our Armstrong International Cultural Foundation has been displaying the Isaiah and Hezekiah bullae in the world-premiere exhibit “Seals of Isaiah and King Hezekiah Discovered” in the grand lobby of our performing arts center, Armstrong Auditorium, since last June. Our exhibit concluded yesterday—the very same day as the announcement of the new Nathan-Melech and Ikar seals! When one exciting event concludes, another begins. This is so often the case with archaeology in Jerusalem. We look forward to more exciting discoveries as excavations in the city continue. You can browse our “Seals of Isaiah and King Hezekiah Discovered” exhibit online. Alternatively, you can read or request a free copy of our exhibit brochure. We also have an online version of an earlier exhibit we hosted, centered around the bullae of Jehucal and Gedaliah: “Seals of Jeremiah’s Captors Discovered.”

These artifacts, among quite literally thousands of others, help affirm the veracity of the biblical account. Many today reject the Bible as a credible historical account, but artifacts continue to be unearthed that confirm it.

For more information about how archaeology proves the accuracy of the biblical account, please read our article “So Much Archaeological Proof!”