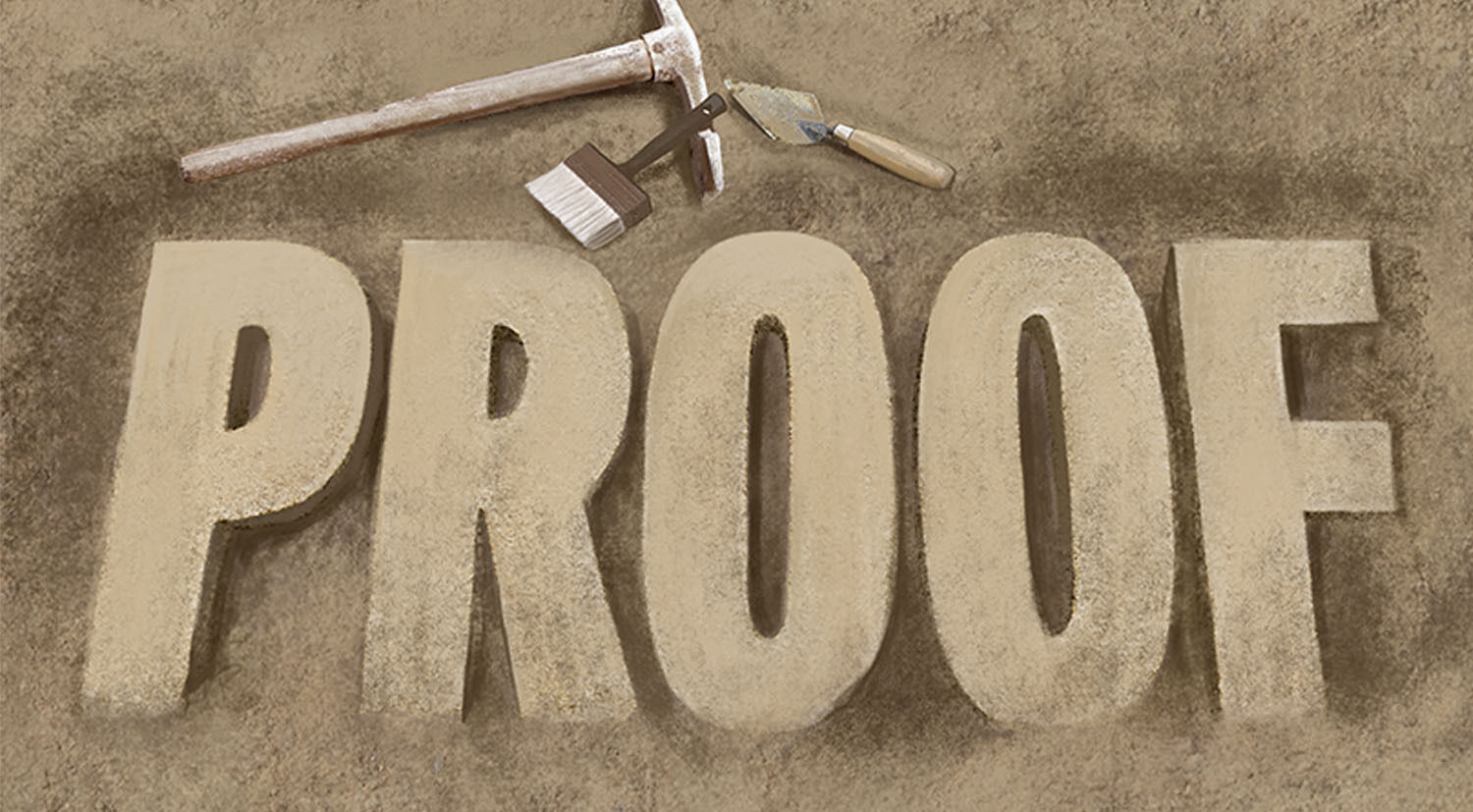 So much scientific research today is done under the relatively modern assumption that God does not exist—that science is incompatible with God and with the Bible. Even those scientists who do harbor some belief in God cast those beliefs aside once they enter the office at work.

Is science incompatible with God? Is the Bible really just a handful of made-up stories set against a backdrop of real-life places? You ought to know!

Over the past several years, I have been privileged to participate in the field of archaeology. And I can tell you that this corner of science alone—this unearthing of historical fact—absolutely proves the biblical record. It shows that the Bible can be counted on more than any other history book to shed light on the true events of history.

Of course, this is not the only field of science that proves God’s existence, but it is one that continues to demonstrate the perfect record of the Holy Bible and its authority as a reliable and inspired document.

Let’s examine several examples of how archaeology proves the Bible.

You have probably heard the names of many of Israel’s and Judah’s biblical kings. Do you know just how many have had their existence proved, independently, through archaeology? These are the names of kings that have turned up in early, original contexts: David, Omri, Ahab, Jehu, Joash, Jeroboam ii, Uzziah, Menahem, Ahaz, Pekah, Hoshea, Hezekiah, Manasseh and Jehoiachin. The existence of these kings has been verified through scientific discovery by the most stringent of analytical standards.

Several years ago, the personal seal impression of King Hezekiah was found during excavations on Jerusalem’s Ophel mound. The tiny stamped clay piece reads: “Belonging to Hezekiah, [son of] Ahaz, king of Judah.” This impressive find is one of many that refer to King Hezekiah. His name also turns up in inscriptions belonging to his arch-nemesis, Assyria’s King Sennacherib.

King David has been a sticking point for critics. They suppose that he was only a mythical king, yet when the Tel Dan Stele, called the “victory stone,” was found in 1993, their skepticism collapsed. The ninth-century b.c. stele inscription contains a phrase that reads: “I killed [Ahaz]yahu son of [Joram kin]g of the house of David.” This was not only a reference to David, but an established kingly line that descended from him. (This inscription also depicted the events of 2 Kings 8, which led to the deaths of kings Ahaziah and Joram.)

The artifact faced intense scrutiny, more than just about any other, in order to ascertain its legitimacy. Its legitimacy was proved. And now we have two further near-certain references to King David: One on the Mesha Stele (a ninth-century b.c. large stone inscription that parallels a biblical story in 2 Kings 3) and the other on an Egyptian Negev inscription (10th century b.c.). Beyond just finding the name of King David, we have also found several constructions that the Bible attributes to him.

These Israelite kings were the contemporaries of many leaders in other regions described accurately in the Bible, likewise verified through archaeology. Among them are the pharaohs Shishak, So, Tirhakah, Necho and Hophra. There are the Syrian kings Hadadezer, Ben-hadad, Hazael and Rezin. Also, the Moabite King Mesha. Assyrian kings Tiglath-Pileser, Shalmaneser, Sargon, Sennacherib and Esarhaddon. Babylonian kings Merodach-Baladan, Nebuchadnezzar, Evil-Merodach and Belshazzar. Persian kings Cyrus, Darius i, Xerxes, Artaxerxes and Darius ii. Not only were these kings described accurately in the Bible, but their accomplishments were also described. That is a lot for a supposedly “fallacious” book to get right.

And it’s not just the kings. Archaeology has shed light on biblical princes such as Jehucal and Gedaliah. There is also evidence of the Prophet Isaiah, the false prophet Balaam and even a tantalizing artifact that may well refer to the Prophet Elisha.

While the ancient titles of kings, princes and prophets are quite clearly understood, the Bible describes some other, unusual ranks. One is governor of the city (Jerusalem). It seems odd this position would even be necessary when there was a king reigning over the city. Nevertheless, the title was confirmed in 2017 during archaeological excavations just outside Jerusalem’s Wailing Wall. A small seal impression was found with the inscription “Belonging to the governor of the city.” The seal dates to the eighth century b.c.—perhaps it even belonged to Joshua, who was governor during the reign of Josiah (2 Kings 23:8).

Then there is the unusual, specific description of the sixth-century b.c. individual named Tatnai: “governor on this side the river” (Ezra 6:13). This man and his office have likewise been confirmed through a number of inscriptions, recorded as “Tattenai, Governor of Across-the-River.” An unusual title—yet extraordinary archaeological corroboration of the biblical account.

Or is it so extraordinary, if the Bible really is a legitimate, factual document?

What about biblical cities: The Bible contains many descriptions of towns and cities where the individuals listed above lived, along with the events that happened there. Just how accurate are these descriptions? Over the last century, archaeology has had much to say.

Remember the walls of Jericho that “came tumbling down”? The remains of those crumbled city walls have been discovered. They litter the base of the ancient site of Jericho, providing remarkable insight into the beginning of Joshua’s conquests. (You can read more about Joshua’s attack against Jericho at watchJerusalem.co.il/30).

The great city of Jerusalem has been known for millennia and documented in many historical sources. But the Bible’s description of the city, and what happened there, has been confirmed repeatedly through archaeology.

There is the famous tunnel of Hezekiah (2 Chronicles 32:3-4, 30; 2 Kings 20:20). This impressive tunnel has been found, snaking 1,750 feet deep in the bedrock of Jerusalem. There is the palace of David, a structure that has also been found. Jerusalem’s wall, built by King Solomon (1 Kings 3:1): found. The wall Nehemiah constructed in the fifth century b.c.: found. Along with many other features.

The Bible describes Solomon’s nationwide building projects. 1 Kings 9:15 states that Solomon built “the wall of Jerusalem, and Hazor, and Megiddo, and Gezer.” Uncannily (or is it?), at the sites of Hazor, Megiddo and Gezer, construction has been found dating to Solomon’s period showing exactly the same building patterns. These architectural features are known as “Solomon’s Gates” or “Six-Chambered Gates.” They help confirm that during this early Solomonic period in the 10th century b.c., there was a strong, centralized government regulating the building programs over the wider region of Israel.

Then there is the Timna mines. This is an amazing biblical site, though not directly mentioned in the Bible. The Timna mines were situated in the southern kingdom of Edom. They are the world’s oldest copper mines. Strangely, during the 10th century b.c., copper production peaked. Why? The Bible tells us that during that period, Israel’s temple and royal buildings were being built, for which Solomon used immense quantities of copper. Not only that, Scripture reveals that by that time, Israel had conquered and controlled all of Edom (2 Samuel 8:13-14). In 2017, petrified donkey manure discovered at Timna was analyzed. The scientists discovered that the donkeys’ feed had originated from the Jerusalem area! Timna is just one example of a city not even mentioned in the Bible that still proves the accuracy of the biblical record.

The Bible describes many cities that have been found and confirmed through archaeology. Israelite cities such as Samaria, Megiddo, Hazor, Shechem, Dan, Beth Shean, Jericho, Gezer and Shiloh. Judean cities like Jerusalem, Hebron, Lachish and Beersheba. The five Philistine cities of Gath, Ashdod, Ashkelon, Ekron and Gaza. Egyptian cities. Assyrian cities. Babylonian cities. Persian cities. There are literally dozens more biblical cities that have been discovered archaeologically—along with an accurate representation of what happened in them.

Zooming out even further, there are the civilizations. And likewise, we find accurate depictions in the Bible of the civilizations extant at the time various events were recorded. There are numerous examples. We will highlight just one.

The Hittite civilization is mentioned often in the Bible. Scripture describes Abraham burying his wife in land purchased from Hittite merchants. The Hittites were allied with the king of Israel in fending off the Syrian Empire. Yet until the 20th century, no evidence of the Hittite civilization had been uncovered. Historians said it probably never existed, and even if it did, it couldn’t have been a very strong regional power.

In 1906, however, an immense, sprawling fortified city found in modern-day Turkey was confirmed to have been the Hittite capital, Hattusha. A royal library of around 10,000 tablets helped prove to archaeologists that these people were indeed the people of the land of Hatti, the kingdom of Kheta in the Egyptian texts, and the Hittites of the Bible. This massive empire controlled what became modern-day Turkey, and its power and influence expanded as far south as Syria and around parts of northern Canaan, just as described in the Bible.

Archaeology has confirmed the accuracy of many of the Bible’s descriptions of civilizations, cultures and their customs. Beside the Hittites, there are the Canaanites, Egyptians, Assyrians, Babylonians, Persians, Philistines, Moabites, Edomites, Ammonites, Syrians and more that have been corroborated by archaeology. Again—that is a lot to get right.

The Bible has received more criticism than any history book known to man. Yet no other book is like it: having been written so long ago, by so many different authors, in so many different locations, and being proved accurate time and again. Truly, the Bible is a magnificent historical record, matching perfectly with scientific discoveries. As much as people try to discredit the Bible through science, nothing has proved it false. The skeptics are either proved sorely wrong, or they have merely disproved preconceived misbeliefs about what the Bible really says.

And if some biblical event, place or person hasn’t yet been confirmed through archaeology, just wait! Arguments from “silence”—the absence of evidence—are a classic pitfall of overzealous skeptics. New discoveries are being made constantly. The veracity of the Bible has been—and is still being—dramatically revealed!

Consider what this means for your life. The Bible is true, and you can prove it. It is right about all these historical, geographical and cultural details. This is undeniable evidence that it is also accurate and trustworthy regarding the plans, expectations and commands of its Author, and our Creator.

The Proof of the Bible
Why is the world’s best-selling book held in awe by some, in passive discredit by others, and understood by virtually none?
From The May-June 2019 Philadelphia Trumpet
View Issue FREE Subscription
Next
Previous