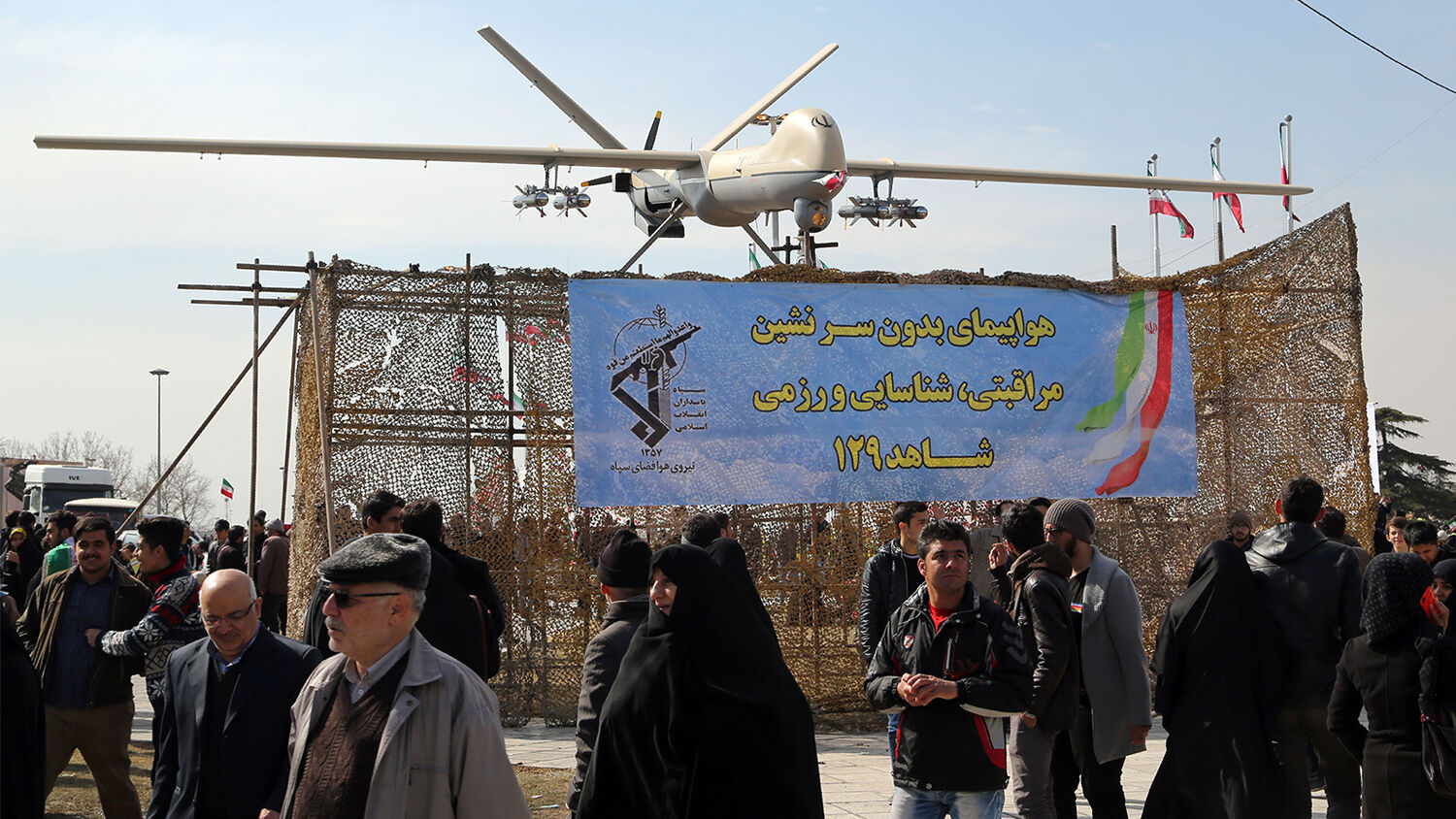 Iranians walk past Iran’s Shahed 129 drone displayed during celebrations in Tehran to mark the 37th anniversary of the Islamic Revolution on Feb. 11, 2016.
ATTA KENARE/AFP/Getty Images

The push for aerial supremacy is an expression of Iran’s desire to conquer Jerusalem.

The Islamic Revolutionary Guard Corps (irgc) held a massive aerial exercise over the Persian Gulf on March 14, in its first large-scale drill using offensive drones, according to the Washington Post. Multiple sources say the 50 Iranian-made Shahed 171 drones, copies of the United States-built RQ-170 Sentinel stealth drone, flew over 620 miles (1,000 kilometers) before successfully striking their intended target on the Bani Farur Island in Iran’s territorial waters in the Persian Gulf.

The historic drill was attended by irgc deputy head Brig. Gen. Hossein Salami and Aerospace Force Brig. Gen. Amir Ali Hajizadeh, two prominent figures in Iran’s military. Hajizadeh said, “One of the features of this exercise is the power to design and plan co-flying uavs in a very small geographic area,” which heralds the “rise of a new air power in Islamic Iran.”

According to the Jerusalem Post, the “Beit al-Maqdis,” or “Way to Jerusalem,” exercise was the first time Iran had operated so many drones in an “offensive operation” that was conducted with “high precision.” irgc Maj. Gen. Golam Ali Rashid said, “[T]oday we are witnessing the strongest maneuvers of the irgc’s Aerospace Forces.” He said the U.S. should be “humiliated and feel shame.”

In 2011, Iran captured a downed U.S. RQ-170 Sentinel drone. It immediately went to work reverse engineering it. In November 2014, its first copy—the Shahed 171—modified with bombing capabilities in addition to its reconnaissance capabilities, took its first test flight.

On February 12, Israel intercepted an Iranian drone flying in Israeli airspace; it was later determined to be an updated Shahed 171.

“[I]t’s more sophisticated since it’s supposed to be jet powered. But from the video released by the Israel Defense Forces, you don’t see any trails of hot air typical of jet-powered vehicles,” said Tal Inbar, director of the uav and space program at Israel’s Fisher Brothers Institute for Air and Space Strategic Studies. “Either way, the fact that it was tracked and shot down by the Israel Air Force was a test for both sides: For the Iranians, it showed that they need to improve upon their stealth properties.”

On February 21, Lebanon’s tv Al-Manar quoted Hazjizadeh as saying, “Seven to eight [U.S.] drones that had constant flights over Syria and Iraq were brought under our control, and their intel was monitored by us, and we could gain their firsthand intel.”

The Iranian government-influenced Fars News Agency footage below shows Iran infiltrating the U.S. Army’s Command Center and gaining control of a U.S. drone. The drone malfunctioned and crashed into the desert. Uncertain of who was controlling the drone, U.S. forces decided to bomb the drone, destroying it. An Iranian drone flying in the area recorded the footage.

Iran’s drone advancements are a crucial aspect of its desire to export terrorism to its various proxy networks. Experts have linked back to Iran various drones from Shiite militias in Iraq, Hezbollah in Lebanon, Quds Force in Syria and Houthi rebels in Yemen.

On Feb. 18, 2018, Iran’s government-influenced Tasnim News Agency quoted Supreme Leader Ayatollah Ali Khamenei as saying, “Without a moment of hesitation, the country must move to acquire whatever is necessary for defense, even if the whole world is opposed to it.”

Tasnim has frequently quoted Khamenei saying that Iran “will not hesitate to strengthen its military capabilities.” Iran’s persistence as a major pioneer in drone technology—its capabilities in reverse engineering American military technology—proves this fact.

Iran is an extremely aggressive nation with the goal of destroying Israel and conquering Jerusalem. Iran relies heavily on Gen. Qassem Suleimani, head of Iran’s Quds Force, the expeditionary branch of the irgc. Suleimani reports directly to the ayatollah in Tehran and has been instrumental in Iran’s strategy revolving around Jerusalem.

Daniel 11:40 prophesies about a radical, pushy power: “the king of the south.” Trumpet editor in chief Gerald Flurry identifies radical Islam, led by Iran, as this power in his booklet The King of the South (request your free copy here). In this booklet, Mr. Flurry examines Iran’s strategy to achieve regional hegemony. “The most precious jewel of Iran’s plan is to conquer Jerusalem,” he writes. “The blatantly bold and aggressive foreign policy of Iran must lead to war. It will either conquer or be conquered.”

Iran will keep pushing to try to conquer Jerusalem (Zechariah 14:2). Even the name of Iran’s “Way to Jerusalem” aerial exercise reveals its desire to take over that city.