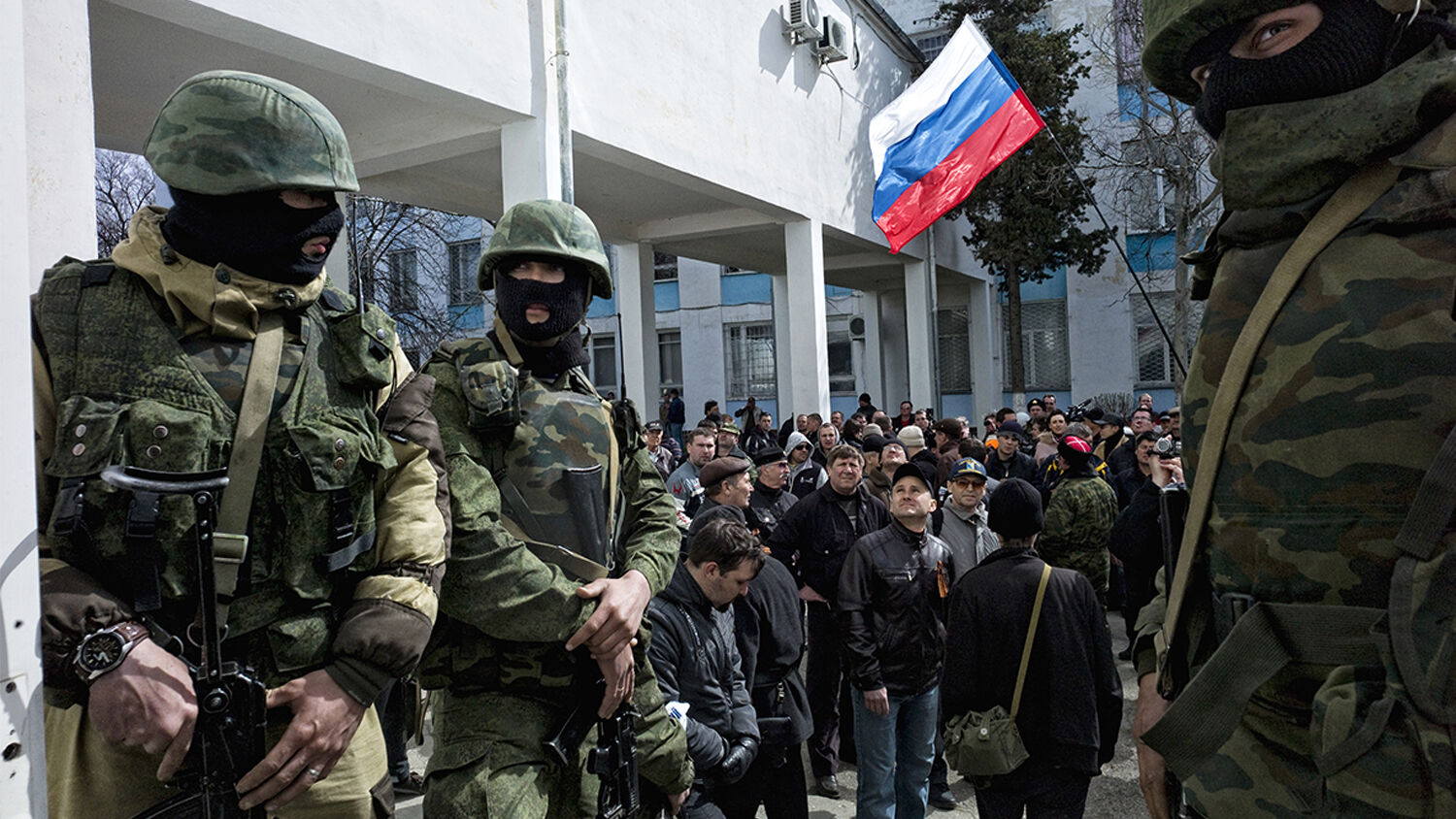 ‘The Ukraine debacle has taken us a giant step closer to World War iii.’

Five years ago today, Russia officially annexed Ukraine’s Crimean Peninsula. “The Ukraine debacle has taken us a giant step closer to World War iii,” Trumpet editor in chief Gerald Flurry wrote at the time. If you understand what really happened in Crimea, from the state of the world in the 1980s to the era of Vladimir Putin to today, you will realize why world war looms in the future.

During the 1980s, the Union of Soviet Socialist Republics was going strong in its decades-long Cold War standoff against the United States. The Soviet Union consisted of Russia, by far its most dominant nation, as well as Ukraine, Georgia, Belarus, Lithuania, Latvia, Estonia, Moldova, Uzbekistan, Kazakhstan, Kyrgyzstan, Tajikistan, Turkmenistan, Azerbaijan and Armenia. Russia forged all of these nations and their various peoples into a Communist, nuclear-armed superpower.

But by the end of the 1980s, the Soviet Union’s economic, social and political problems were reaching a breaking point, and it began to crack. By the end of 1991, the bloc had totally crumbled, leaving behind Russia and 14 separate republics, which became independent nations.

The West rejoiced at the collapse, hailing it as a triumph for liberty, a conquest for democracy, and proof of the supremacy of the free market over socialism. Most former Soviet nations were thankful for their independence: They began constructing freer societies.

But for Russia, it was a humiliating defeat. Russians trudged through the next decade as a depleted, exhausted, unstable nation.

Vladimir Putin lived through the Soviet Union’s collapse and those subsequent years of Russian defeat and humiliation. He became Russia’s president in the year 2000. In 2005, he made a statement that revealed his worldview: “The demise of the Soviet Union was the greatest geopolitical catastrophe of the century.”

The 20th century was blighted by World War i and World War ii, which included unspeakable atrocities such as the Rape of Nanjing and the Holocaust. The century was also scarred by the Holodomor, inflicted by the Soviet Union on its own people; the Great Famine, inflicted by Communist China on its own people; a nuclear arms race that gave mankind the ability to extinguish all human life; and other catastrophes.

But in Putin’s mind, none of these developments was as catastrophic as the collapse of the Soviet Union. He views it as the greatest geopolitical catastrophe of the century because it decimated Russia’s power over those 14 nations and its power in the world.

His 2005 statement shows that Putin deeply laments the collapse of that Soviet bloc; and three years after uttering those words, he took a major step toward rebuilding Russian power.

In early August 2008, Russian forces invaded the former Soviet nation of Georgia. The Russians quickly overpowered Georgian forces and asserted control over the two regions of South Ossetia and Abkhazia, which constitute about 20 percent of Georgia’s internationally recognized territory. Suddenly, these areas of a sovereign nation were back under Russian control, just as they had been during the Soviet era.

This was a major geopolitical event, and it sent reverberations around the globe.

A few days after the invasion, as the dust was still settling on the conflict, Mr. Flurry wrote a landmark article about it. He wrote: “Russia’s attack on Georgia in August marks the beginning of a dangerous new era in history. This was the first military strike of a rising Asian superpower—and there will be more!” (theTrumpet.com, Aug. 22, 2008).

Mr. Flurry went on to specifically name which former Soviet nation Russia would set its sights on next.

“Today, you have [Western leaders] trying to also bring … Ukraine into nato,” he wrote. “I don’t believe Russia will ever allow that to happen. … Will a crisis occur over Ukraine? That area is the breadbasket of Russia, and surely it is willing to wage war over that as well” (ibid).

Some who read that 2008 article may have dismissed it and forgotten about it a short time later. But on Nov. 21, 2013, political crisis broke out in Ukraine when President Viktor Yanukovych announced he was pulling the nation out of an agreement to more deeply integrate with the European Union. The announcement came after Yanukovych had a secret meeting with Putin, during which Putin pressured him to pull out of the EU deal and to work instead on bringing Ukraine back to closer alignment with Russia.

Just days before this momentous announcement by Yanukovych, Mr. Flurry filmed an episode of The Key of David about the role of Russia and its leader in Bible prophecy. He highlighted Revelation 9:16, which describes an Asian force of 200 million soldiers fighting in World War iii. He also discussed Ezekiel 38:2, which says this massive Asian force will be led by “the prince of Rosh, Meshech, and Tubal” (New King James Version).

Meshech and Tubal, he explained, are early names corresponding to modern Russian cities, and Rosh is a variation of an ancient name for Russia.

In that episode, which first aired on Nov. 22, 2013, Mr. Flurry showed that these are end-time prophecies and he made a bold and specific forecast: He said Putin will likely be the “prince of Russia” that leads this end-time Asian force. “Vladimir Putin could very well become the leader of the 200 million-solider army talked about in Revelation 9:16, because that great army is going to be led by Russia,” he said. “That’s what Bible prophecy says. This great conglomerate is going to be led by the Russians, and perhaps by Vladimir Putin himself. He is a man, I think, that is ideally qualified for such a job. We need to watch him and watch what’s happening in Russia.”

After Yanukovich’s November 21 announcement that he would align Ukraine more closely with Russia rather than with the EU, many Ukrainians were furious. These people didn’t want to see Ukraine controlled by Russia again. Half a million of them took to the streets for mass protests, demanding that Yanukovych step down.

The protests simmered for weeks and in February 2014, they grew violent. At least 67 people died in demonstrations that month, and on the 22nd, Yanokoych fled the presidential palace and eventually went into exile in Russia.

Meanwhile, “little green men” began showing up on Ukraine’s Crimean Peninsula. These were later confirmed to have been Russian special forces. But all insignia had been removed from their uniforms, so Russia was able to officially deny invovlement. The unmarked soldiers seized the parliament building in Crimea and raised the Russian flag there.

By the end of February, these troops, along with pro-Russian Crimean militias, had taken up positions around two of Crimea’s airports and a coast guard base. They had seized numerous government buildings. Ukrainian officials, desiring to avoid more violence and more Russian provocations, ordered the Ukrainian military not to resist. All the while, even though it was clear to analysts that these were Russian operatives and Russian forces, Putin remained silent.

On March 11, as Russian operatives grew increasingly aggressive, Crimea’s supreme council and officials in Sevastopol announced that they would hold a referendum about whether the people of the region wanted to join Russia. The referendum was constitutionally illegal and the vote was sullied with myriad irregularities. It was a sham, basically held at gunpoint. But for Putin, it worked.

On March 18, 2014—five years ago today—a treaty was signed to officially incorporate Crimea, including Sevastopol into the Russian Federation. Much of eastern Ukraine was also left in a state of frozen conflict, giving Russia de facto control over it. So Putin had reclaimed some strategically vital segments of the old Soviet geography for Russian control. He had made a major advance in his goal of rebuilding the Soviet Empire’s power—as five years earlier Mr. Flurry had forecast would happen.

In the May 2014 issue of the Philadelphia Trumpet, Mr. Flurry wrote about the significance of Putin’s takeover, stressing how his underhanded approach had averted a Western response. “In a stroke, Russian President Vladimir Putin redrew Ukraine’s borders,” he wrote. “Before the West realized exactly what was happening, Russia had captured Crimea without firing a shot. … Russia succeeded in swallowing another nation’s sovereign territory.”

Mr. Flurry reiterated his prophecy about Putin fulfilling the role of the “prince of Rosh” mentioned in Ezekiel 38:2, and he explained that the increasing aggression of Putin’s Russia would hasten the fulfillment of an even more significant end-time prophecy: the unification of Europe. He wrote: “The fear you see in Europe because of events in Crimea is going to cause 10 leaders in Europe to unite in a sudden and dramatic way—and in precise accordance with the Bible’s description of that European empire!”

In his booklet The Prophesied ‘Prince of Russia,’ Mr. Flurry later wrote that, although the direction of Putin’s Russia shows that the world is on the fast track to global catastrophe, there is also great cause for hope tied into these developments.

He explained that the fact that Putin is now in power proves that the most hope-filled event in mankind’s history is near. He wrote:

Mr. Putin’s warfare is going to lead directly into the Second Coming of Christ. … Vladimir Putin is a sign, literally a sign, that Jesus Christ is about to return! This is one of the most inspiring messages in the Bible.

We have to realize that this is all good news because Jesus Christ is going to return to this Earth at the very end of the coming world war. …. Jesus Christ is about to return—biblical prophecy makes that clear.

To better understand the game-changing history from five years ago, and to understand these vital Bible passages and the peril and hope that is connected to them, order your free copy of Mr. Flurry’s booklet The Prophesied ‘Prince of Russia.’