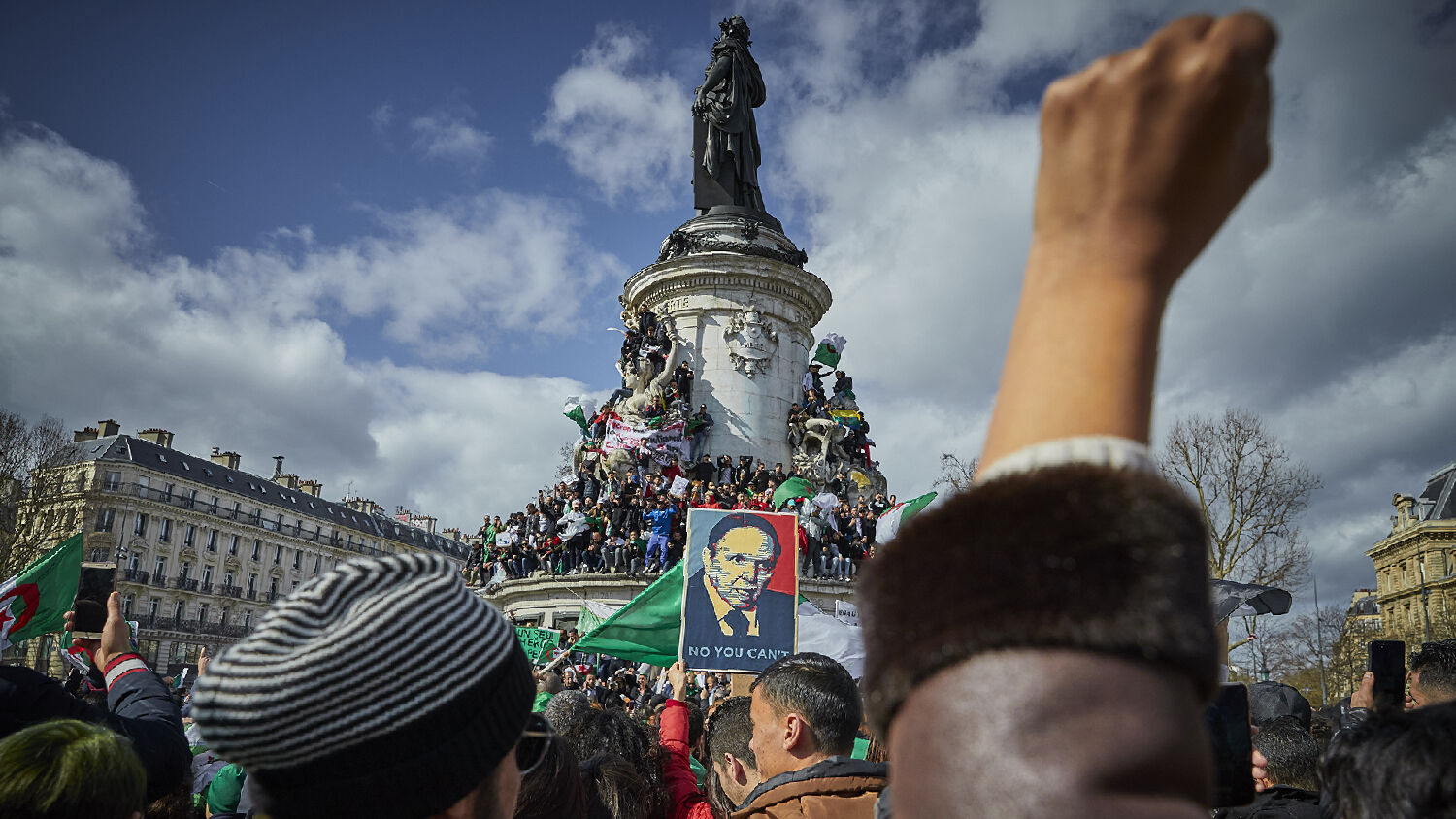 French Algerians protest in a Silmiya, or peaceful, demonstration against a fifth presidential term for President Abdelaziz Bouteflika on March 10 in Paris, France.
Getty Images

Tens of thousands took to the streets, chanting, “No to a fifth Bouteflika term” and “No to the mafia regime,” in the largest mass protests in Algeria since the 2011 Arab Spring.

With no clear successor in sight, the leadership vacuum presents Iranian-backed radical Islamists with an opportunity to hijack the nation, which would pose a dangerous strategic threat to Europe.

On March 4, police forces in the capital Algiers fired tear gas on protesters who were chanting, “Bouteflika, get out!” In the neighborhood of Belouizad, an Islamist stronghold, demonstrators set fire to a social security office, leading to clashes with the police.

Fearing the demonstrations would erupt into a revolution, police and security forces backed down from using further force. Instead, it has maintained a watch on the protests and set up barriers to block main roads and contain the march.

Algerian president’s move not to stand for fifth term fails to satisfy protesters — Here’s a look at the events that brought Algeria to this point. pic.twitter.com/driH5zzShk

“The students don’t want this situation, in which a mafia regime controls the state,” Algerian student Ben Sharif Hamadi told Jerusalem Post. “We will decide whether to escalate, including student strikes at every university, if Bouteflika doesn’t end his candidacy for president.”

Mustapha Bouchachi, a member of the Mouwatna protest movement, told Al Hayat tv, “There’s only one thing left for him to do—withdraw his candidacy and return home, if he wants to avoid a new bloodbath in Algeria.”

Now the demonstrators have their wish: Bouteflika will no longer run for president in the elections. But is this really the best for Algeria?

Algeria is primed for a revolution. This is in large part due to a widening generation gap and an intensifying economic crisis.

This younger generation desperately wants a new generation of leadership. Because of their youth, they do not have an attachment to the older ruling elite, many of whom, including Bouteflika, are veterans of the Algerian War of Independence (1954–1962), by which Algeria won its independence from France. Yet there is not a credible candidate backed by the military who is not in his 70s or 80s.

Bouteflika managed to stay in power in Algeria during the 2011 Arab Spring that toppled Arab leaders in Egypt, Libya and Tunisia by using foreign reserves from the nation’s oil industry to boost state spending to address economic concerns.

“What’s different now is that this is about the expression of political will,” said Geoff Porter of North African Risk Consulting. “The government can’t respond to this by spending resources.” According to Reuters, Algerian unemployment of those under age 30 exceeds 25 percent. That means about 7.3 million Algerians under 30 are without jobs. The majority of Algerians are young, in poverty and fed up with the old ways of their ruling elite.

The Algerian youth has lost its patience, and not for the first time.

In early 1991, high unemployment and economic hardships among youths brought about the rise of radical groups. “The black decade” began in December 1991 when the new and enormously popular Islamic Salvation Front was poised to win the national parliamentary elections. After the first round, the military canceled the elections and took control of the government, forcing President Chadli Bendjedid out of office. The government banned the Islamic Salvation Front and arrested thousands of its members. Numerous other Islamic militant groups emerged, and a civil war ensued.

The conflict claimed the lives of some 200,000 people as massacres, violence and extremism nearly tore apart the country. In 1999, after 16 years in exile, Bouteflika returned and was elected president, finally restoring peace and stability to Algeria.

Many of the same generals and war-time leaders are still alive and well remember “the black decade.”

“[The military] will not interfere for now because it is up to the civilian ruling elite to clean the mess. This is not the military’s business,” said a retired general, who asked to remain anonymous. “But it will not accept a remake of the 1990s scenario.”

Algerian Chief of Staff Gen. Gaed Salah guaranteed the security of the nation, criticizing those who want to return to the “painful years” of the civil war “during which the Algerian people experienced all forms of suffering and paid a heavy price.” He pledged that the people would continue to enjoy “security and stability,” guaranteed by the military.

History is repeating itself in Algeria. Unemployment and economic hardships have led to massive demonstrations against the government and a rise in radical opposition parties. With the loss of confidence in strongman Bouteflika, no clear successor and canceled elections, Algeria is on the path for a second “black decade.”

Islamist radicals nearly took over in the 1990s. What is stopping them from succeeding this time?

The renewed turmoil has many in Europe deeply concerned.

On March 6, French Foreign Minister Jean-Yves Le Drian said France is “very attentive to the unfolding events” in Algeria because France is home to more than 6 million Algerians.

France fears another potential wave of migrants will seek refuge in France if Algeria erupts into revolution. “This is why the stability, security and development of Algeria are absolutely essential,” said Le Drian.

“It’s absolutely explosive, and anything we say could light a fuse,” another French diplomat said. “We have to remain very cautious.”

France is deeply concerned about the volatile situation. If Algeria slides into internal conflict as it did in the 1990s, France may once again see Islamic terror spill over from the conflict.

Germany also has strategic interest in Algeria. A January 2017 report by Deutsche Welle said that Algeria was the top importer of German arms. It also has a personnel carrier plant and a deal to manufacture rifles in Algeria. Germany, and Europe, doesn’t want those weapons falling into the wrong hands.

Le Drian publicly stated France’s desire for Algeria to keep its sovereignty, airing the opinion of many Europeans. In addition to Europe’s strategic interests in Algeria, due to its proximity to Europe, it would be forced to get involved if radicals make a power grab.

Ghassan Charbel, editor in chief of Asharq al-Awsat, believes that the Algerian protesters have forgotten that their nation needs a strongman. Otherwise, Algeria, with its various rival parties, will fall into conflict. He wrote, “Algeria cannot, however, live without a strongman.”

If there is one nation in a position to gain from a power vacuum in Algeria, it is Iran.

In his free booklet The King of the South, Trumpet editor in chief Gerald Flurry writes, “The radical Islamic movement, led by Iran, is very strong in Egypt, Algeria, Libya and Ethiopia. This religion will probably take control of these countries very soon.” Egypt has temporarily stayed the unrest, Libya has already fallen into disarray, and Algeria appears to be next—you can be sure that Iran is watching intently.

Last May, Morocco accused Iran of using Hezbollah to deliver weapons to an Algerian-backed militant group fighting against Morocco in the Western Sahara. Last September, Morocco’s minister of foreign affairs accused Iranian diplomat Amir al-Moussawi of having more power than the ambassador, “having the power to fund the Algerian-backed Polisario Front,” and that he was connected to the “the strategic advisers to the Supreme Guide to the Islamic Republic of Iran.”

Iran is seeking to exert its influence in the Middle East and North Africa, and in the process, coming into direct conflict with European interests.

The Bible prophesies about this coming clash between radical Islam and Europe.

“And at the time of the end shall the king of the south [radical Islam, led by Iran] push at him: and the king of the north [European Union, led by Germany] shall come against him like a whirlwind, with chariots, and with horsemen, and with many ships; and he shall enter into the countries, and shall overflow and pass over” (Daniel 11:40).

It is Iran’s push that causes Europe to retaliate. Europe is economically and militarily invested in nations like Algeria. Any ploy by Iran to gain influence or take control in Algeria would be a direct attack on European interest. It would compromise European weapons, trade and security due to its relative location to the European continent. This potential clash of interests creates the potential for volatility in Algeria.

If Iran manages to use Islamist radicals to hijack the civil unrest in a ploy to grab power in Algeria, the nation may once again erupt into civil war, turning it into a similar situation that developed in Libya after the toppling of Muammar Qadhafi.

Algeria’s government and military are strong, but the ruling elite are running out of options. The shattered economy is struggling to keep up with government spending. It is now realizing that throwing money at the problem may have stayed the 2011 Arab Spring uprising, but it was only a temporary solution. Eventually that money will run out and the government will have to answer to an impoverished and upset youth who want change. When it doesn’t have a solution, watch for Iran to make a grab for power by using the radical Islamist parties as proxies in the ensuing conflict.

Algeria is about to face that issue.