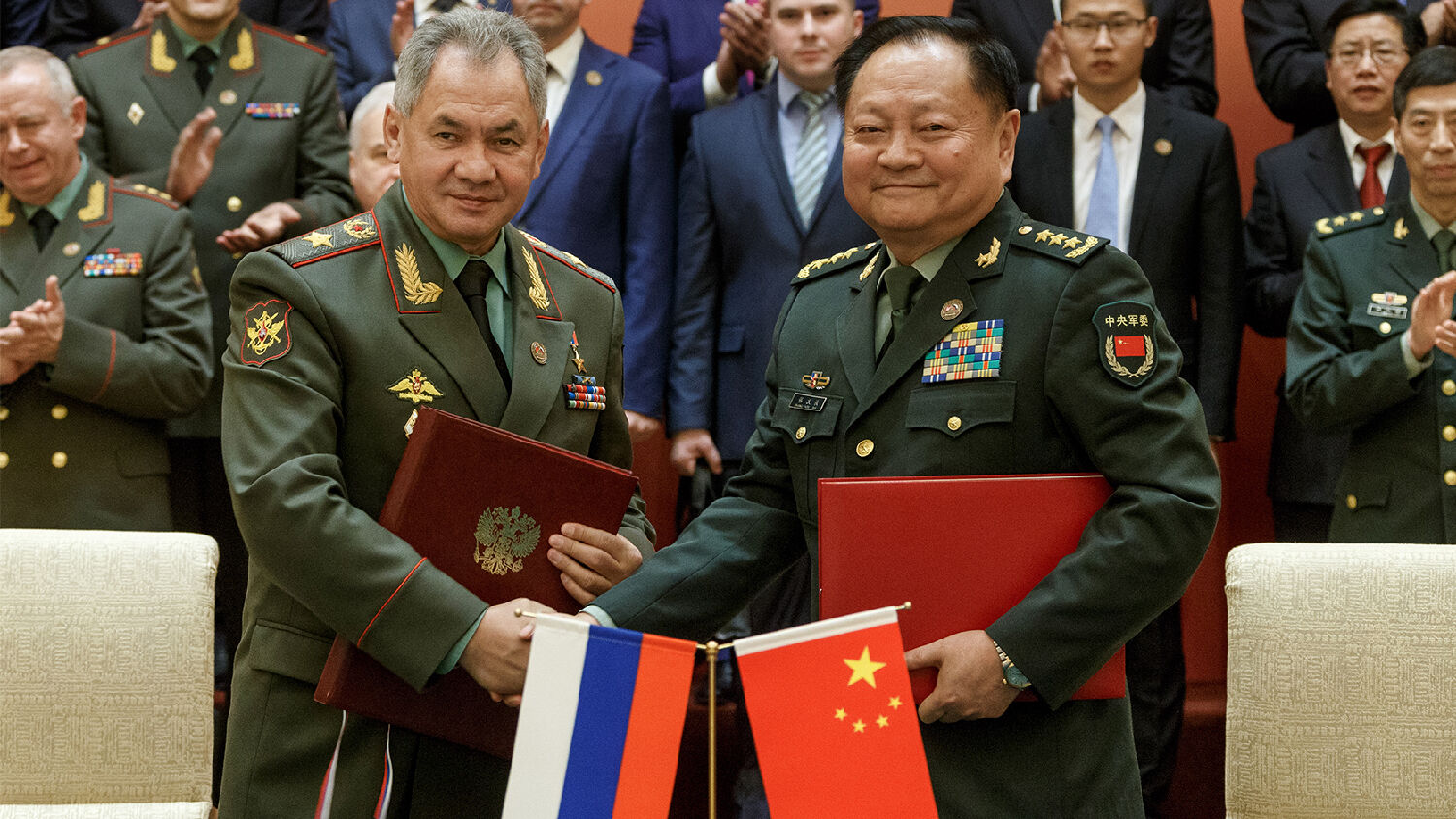 ‘The steadfast denials of a military alliance dynamic here are not based on the evidence.’

The torrent of news about expanding cooperation between Russia and China continues to increase. And though many experts are concerned about the quickly deepening intimacy between these two revisionist nations, the general consensus remains that a real Russia-China alliance does not exist. But a new analysis says that consensus is wrong.

“It is long since time that analysts and policymakers acknowledge the reality that is evolving right before their eyes,” wrote Stephen Blank, a senior fellow with the American Foreign Policy Council, for Second Line of Defense last month.

“[T]he steadfast denials of a military alliance dynamic here are not based on the evidence of arms sales, technology transfer, joint exercises, conventional and nuclear coordination, and long-term strategic dialogues,” he wrote.

Policymakers should stop “taking refuge in clichés and wishful thinking” about Russia and China, Blank wrote, adding that only “on the basis of realism can we move forward to deal with this alliance.”

Blank says onlookers should not be deceived by the fact that the Russian and Chinese leadership do not use the word “alliance” when discussing their relationship. He says this may be intentional subterfuge.

“Moscow keeps inventing euphemisms to disguise what is going on,” he wrote. For years, the Russians called their relationship with China “strategic cooperation.” It was later upgraded to a “comprehensive strategic partnership” and again more recently to a “privileged strategic partnership.”

But Blank says such labels “sound like attempts to deceive foreign observers as to the alliance’s real nature.”

A glimpse of the “real nature” of the Russia-China relationship can be partly gathered from Russian President Vladimir Putin’s remarks on the topic during a 2016 interview with China’s Xinhau news agency. Putin gave what sounds like an explanation of how difficult it is to define “alliance” without using the word. “As we had never reached this level of relations before, our experts have had trouble defining today’s general state of our common affairs,” Putin said. “It turns out that to say we have strategic cooperation is not enough anymore,” he said, adding: “This is why we have started talking about a comprehensive partnership and strategic collaboration.”

Blank suggests that the shades of nuance between these various terms is largely irrelevant given the true nature of the Russia-China relationship. He wrote, “It is hard to know how a privileged partnership expands upon a comprehensive one.”

More significant than the ever evolving labels given to Russo-Chinese ties are the actions showing them to be steadily deepening.

In international affairs and politics, the two walk in nearly perfect lockstep. As Russian Foreign Minister Sergei Lavrov said in 2015, “[W]e feel—and our Chinese friends share this view—that our cooperation and coordination in the international arena are one of the most important stabilizing factors in the world system. We regularly coordinate our approaches to various conflicts, whether it is in the Middle East, North Africa or the Korean Peninsula. We have regular and frank and confidential consultations.”

In mutual trade, Russia and China exceeded $100 billion for the first time last year, with China’s government-controlled Global Times saying in January that in 2019, “bilateral trade is expected to further increase provided that there is a relatively stable world economy.”

And in military matters, the most significant aspect of the relationship, the two have held 30 major joint exercises since 2003. Blank calls special attention to the joint air and missile defense exercises the two held in 2017, saying it “suggests an alliance” because it required both nations to “put their cards on the table and display their c4isr.” This is a broad term referring to the four “c”s of command, control, communications and computer, and also to intelligence, surveillance and reconnaissance. The systems and techniques related to c4isr equip decision-makers and soldiers with actionable information, enabling them to accomplish their goals. Such information is among a nation’s most sensitive, so seeing Russia and China share it with each other indeed indicates a rare camaraderie between them.

“[T]his alliance is not merely a political relationship but one of active military collaboration,” Blank wrote.

In recognition of the military basis for the Russia-China relationship, last week’s Worldwide Threat Assessment of the U.S. Intelligence Community warned that China and Russia are engaged in a “race for technological and military superiority” that will be a defining feature of the 21st century. “China and Russia are more aligned than at any point since the mid-1950s, and the relationship is likely to strengthen in the coming year as some of their interests and threat perceptions converge,” the assessment said.

Blank said the military dimension of the relationship is likely to deepen in 2019. He said Xi has made clear that “both militaries” should “increase cooperation and unswervingly deepen their strategic coordination.”

Blank also mentioned a series of experiments the Russians and Chinese have recently conducted in the atmosphere that could “apparently disturb electrical connections in the territories below.”

He wrote: “These experiments look suspiciously like preliminary efforts to test both ground-based and space-based capabilities to achieve the effects of an emp (Electro-Magnetic Pulse) attack on Earth against their adversaries.”

Chinese journal Earth and Planetary Physics noted that “such international cooperation” involving some of China’s most advanced and important technologies “is very rare.”

Vasily Kashin, senior research fellow at the Higher School of Economics in Moscow, told the Trumpet in September that “if the current trend of deterioration of the Russian-U.S. and Sino-U.S. relations persists, a formal military alliance” between Russia and China could emerge.

In his report last year for the Center for Naval Analyses, Kashin said a certain level of strategic military coordination between Russia and China was already enshrined in a 2001 treaty. He wrote: “Chapter 9 of the treaty stipulated that ‘in case there emerges a situation which, by opinion of one of the participants, can create threats to the peace, violate the peace, or affect the interests of the security of the participant, and also in case when there is a threat of aggression against one of the participants, the participants immediately contact each other and start consultations in order to remove the emerging threat.’”

The treaty “clearly required both sides to consider some sort of joint action in the case of a threat from a third party,” Kashin wrote.

The Trumpet closely watches the deepening ties between Russia and China because the Bible prophesies of an Asian confederation that will form in the end time. This Asian bloc is referred to in Revelation 16:12 as “the kings of the east.” Scriptures show that this bloc will play a major role in a nuclear World War iii.

Trumpet editor in chief Gerald Flurry has shown how these passages (and those in Ezekiel 38) prove that Russia and China will be at the helm of this confederation. And he has shown that the two are already fulfilling the early phases of these prophecies. In 2014, after China declared that it supported Russia’s unlawful annexation of Ukrainian territory, Mr. Flurry said the support was “a stunning fulfillment of a biblical prophecy!”

Actually we have been proclaiming for over 50 years that Russia, China and other Asian nations would ally themselves in the end time.

Notice that he said they would “ally” themselves—not just build a “privileged strategic partnership” or any of the euphemisms that are often used.

And we are in that end time now. … When these Asian nations—extremely powerful nuclear-armed countries—begin to show solidarity with each other regarding moves like that, what does that portend for the world? I tell you it is woe to the world. It will cause many serious problems.

To understand more about the Bible passages that discuss this Asian confederation and its role in end-time events, read Mr. Flurry’s article “Asia Stands With Putin” and order your free copy of Russia and China in Prophecy.