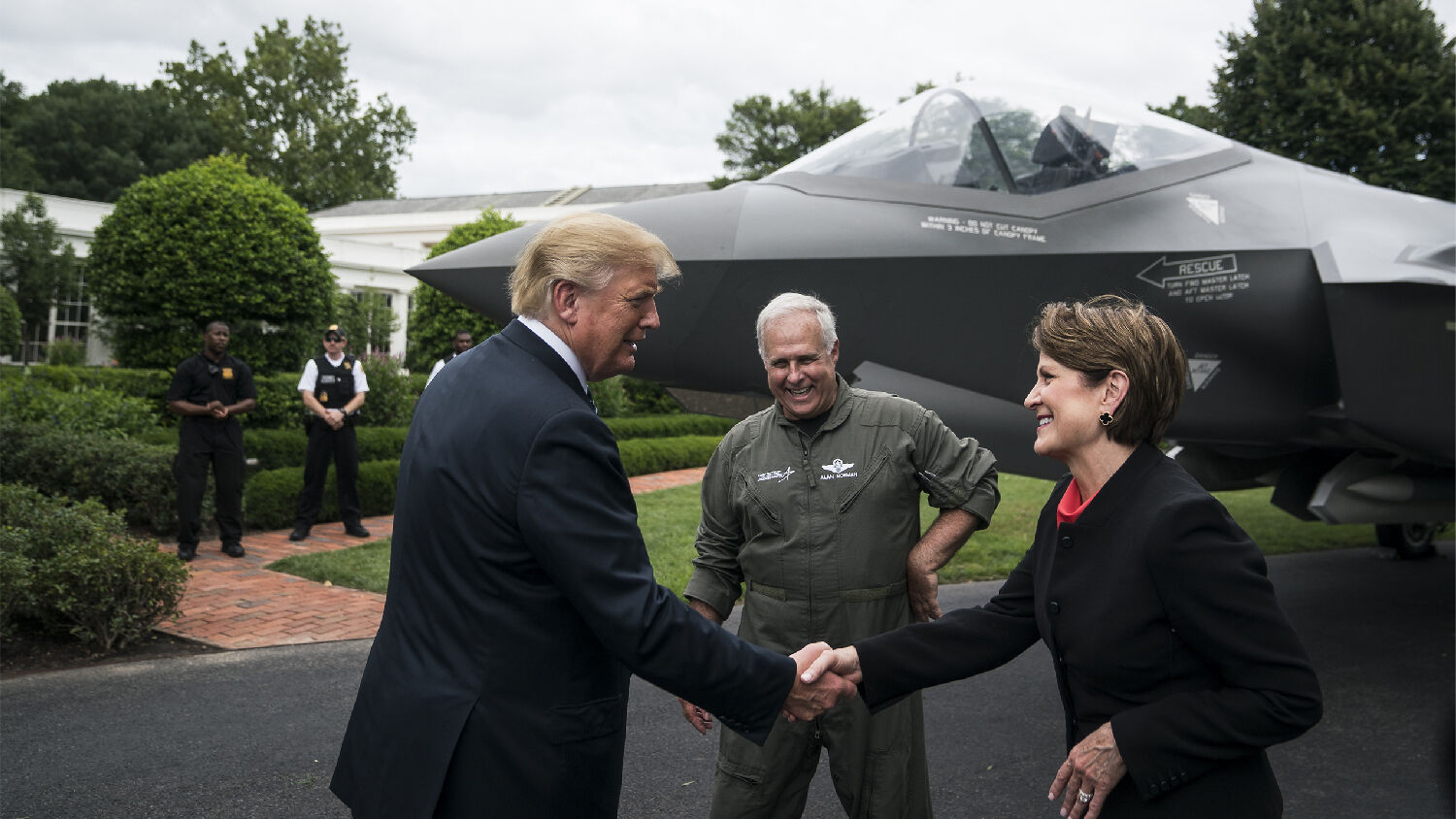 President Donald J. Trump greets Marillyn A. Hewson, chairman, president and ceo at Lockheed Martin, and Alan B. Norman, director and chief test pilot, in front of a F-35 during a “Made in America Product Showcase” event on the South Lawn of the White House on July 23, 2018, in Washington, D.C.
Jabin Botsford/The Washington Post via Getty Images

The Bible forecasts a time when ‘the man of war’ and ‘the captain of fifty’ will be taken away.

“From the executive leadership of top weapons-makers to the senior government officials designing and purchasing the nation’s military arsenal, the United States’ national defense hierarchy is, for the first time, largely run by women,” reports Politico deputy defense editor David Brown. “It’s a watershed for what has always been a male-dominated bastion, the culmination of decades of women entering science and engineering fields and knocking down barriers as government agencies and the private sector increasingly weigh merit over machismo.”

Major news outlets are praising the fact that women are taking over top positions in the country’s largest weapons companies as a victory for gender equality. In fact, scholars like Francis Fukuyama and Steven Pinker have argued in the past that women could make the world more peaceful. Fukuyama wrote in 1998, “A truly matriarchal world, then, would be less prone to conflict and more conciliatory and cooperative than the one we inhabit now.”

Yet the rise of women in the defense industry has not made the world more conciliatory or cooperative. In fact, the Bible reveals that the female domination of the U.S. military-industrial complex is actually a sign of impending conflict.

A vision recorded by the Prophet Isaiah is swiftly becoming reality.

“For, behold, the Lord, the Lord of hosts, doth take away from Jerusalem and from Judah the stay and the staff, the whole stay of bread, and the whole stay of water. The mighty man, and the man of war, the judge, and the prophet, and the prudent, and the ancient, The captain of fifty, and the honourable man, and the counsellor, and the cunning artificer, and the eloquent orator …. As for my people, children are their oppressors, and women rule over them. O my people, they which lead thee cause thee to err, and destroy the way of thy paths” (Isaiah 3:1-2, 12).

The Bible often uses Jerusalem, the capital of ancient Israel under King David and King Solomon, to symbolize all the modern descendants of Israel. The late Herbert W. Armstrong explained in his landmark book The United States and Britain in Prophecy that the Anglo-Saxon peoples who settled in Britain and the U.S. descended from the ancient Israelites. This astonishing truth means that the Bible’s end-time prophecies concerning Israel are primarily directed at these two nations (as well as the State of Israel, which also descended from the ancient Israelites).

This prophecy in Isaiah 3 is about a time when God takes “the [men] of war” and “the captain[s] of fifty” away from America, and replaces them with women and childish leaders. This leadership change is prophesied not to lead to a more enlightened, peaceful future but to “destroy the way of thy paths” and to leave the nation desolated by war (verses 5-12).

Modern society is attacking “traditional masculinity” and the so-called “patriarchy.” Yet the Bible states that God intentionally and carefully created men and women to be different in order to fulfill complementary roles and build the family, society and the world (Genesis 1:27; Matthew 19:4). It specifies that God designed men and women to fulfill different roles, and that men were designed to protect women (Isaiah 32:2). War was not God’s plan for mankind, but Isaiah still states that it is a curse when women take the lead in matters of national defense.

Human beings break God’s laws regarding gender and every other aspect of behavior, not realizing that keeping those laws leads to happiness and fulfillment. The point of these curses is not for God to “get back at” human beings, but to lead them to repentance from their own self-harming actions. To learn more about why God is removing strong leaders from America and Britain, please read Isaiah’s End-Time Vision, by Gerald Flurry.