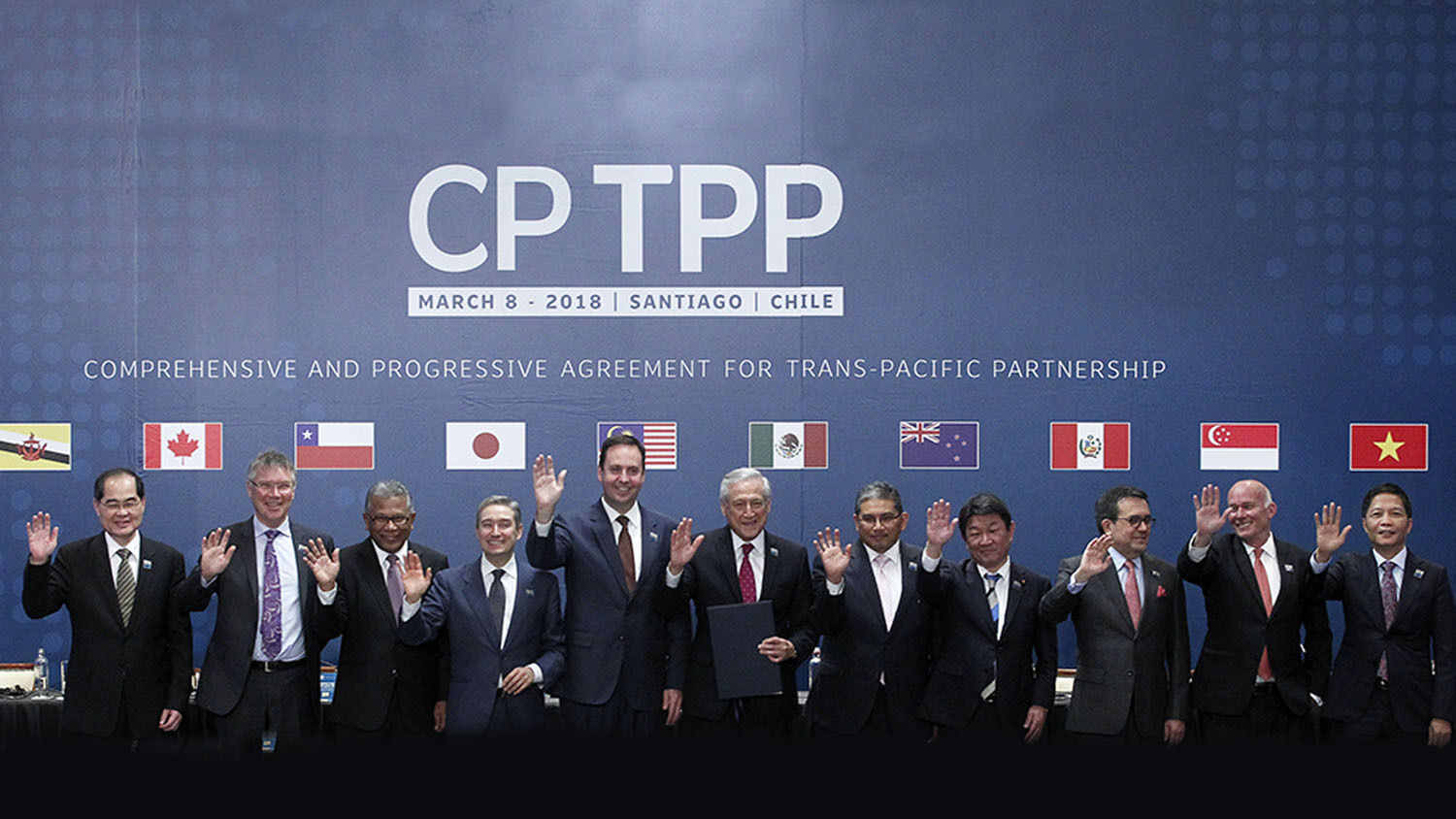 Representatives of the 11-nation Pacific trade pact Comprehensive and Progressive Agreement for Trans-Pacific Partnership pause for a photo in Santiago, Chile, on March 8, 2018.
CLAUDIO REYES/AFP/Getty Images

Yet another trade agreement excludes the U.S.

A new trade agreement that covers more than 13 percent of the world economy, accounting for 15 percent of global trade, was ratified by its first six countries on December 30. The Progressive Agreement for Trans-Pacific Partnership (cptpp) will cover 500 million people.

Australia, Canada, Japan, Mexico, New Zealand and Singapore will be joined by another four countries that have already signed but not yet ratified the agreement. Vietnam joins on January 14, while Brunei, Chile, Malaysia and Peru will join the deal 60 days after completing the ratification process.

The United Kingdom’s international trade secretary, Dr. Liam Fox, heralded the alliance as a “force for good” for millions of people.

Japan, the largest economy in the agreement, is spearheading the endeavor, which will slash about 95 percent of all tariffs. For those countries that have already ratified the agreement, about 18,000 tariffs were removed overnight, while others will be removed slowly in stages, some taking up to 20 years.

The new deal will cut costs on customs clearance, rules of origin and compliance. Lowered tariffs will also boost the flow of goods between the 11 signatory countries, which are all expected to see a boost to their economies. This new deal combined with a trade agreement with the European Union is expected to boost Japan’s economy by $117 billion.

The president of Canada’s Agri-Food Trade Alliance, Brian Innes, highlighted the boost to Canada’s economy. “Right now, we’re shipping $8 billion of exports to cptpp countries, and we think we’ll see that grow by 25 percent once these tariff cuts are implemented,” he said.

While the pact covers a relatively small percentage of the global economy, it is expected to grow quickly with several other Asian nations and even the United Kingdom expressing interest in joining, post-Brexit.

With many additional countries seeking to join this new alliance and all the hype surrounding it, the absence of one country makes this event particularly significant.

Ironically, the cptpp is almost an exact replica of the Trans-Pacific Partnership (tpp). This original trade agreement was drafted under the Obama administration as part of its “Asian pivot” designed to ensure that the U.S., not China, wrote and enforced the rules of global trade. All but 22 of the more than 1,000 provisions in the tpp have been carried over to the cptpp.

The tpp was signed by the same 11 signatories of the cptpp, plus the U.S. The agreement had not yet gone into force when President-elect Donald Trump announced that the U.S. would pull out of the tpp on his first day in office, saying the agreement was “a potential disaster” for America. By the end of his first week in office, Trump had signed an executive order withdrawing the U.S. from the tpp.

U.S. isolationism has again opened the door for other powers to rise, and Japan has taken over where the U.S. has left off. Japan is now spearheading the new free-trade agreement.

“Japan’s role in the global free-trade system has changed from that of a participant to a leader in building 21st-century common trade rules, as well as a coordinator and standard flag-bearer of the entire system,” said Japanese Economic Revitalization Minister Toshimitsu Motegi.

This is a massive step for Japan. A few years ago, Japan would have refused to take part in ventures that did not include the U.S. It is clear now, however, that the postwar world order is gone.

America is expected to suffer significantly from this new deal as the price of goods from non-cptpp countries will become more expensive, making its goods less competitive. cptpp countries are likely to undercut the U.S. For example, Japan is one of America’s top markets for beef. Australian beef could soon replace American beef now that tariffs on beef imports into Japan from a pact member will eventually be cut by 27.5 percent.

It is a similar story in other markets. With tariff cuts, by 2020, Canadian wheat will be $70 cheaper per metric ton than American wheat.

The impact on non-cptpp European nations is expected to be less severe with the recent EU-Japan trade deal.

The Peterson Institute for International Economics calculated further impacts to the American economy. Had the U.S. stayed in the tpp, income was set to increase by $131 billion annually. Now, as well as missing out on those gains, it will lose an estimated $2 billion in income resulting from the disadvantages of being outside the deal. While Trump may have been right in citing several negatives for America in the deal, that does not negate the fact that from now on there will be increased pressure on U.S. goods.

More importantly, the U.S. has forfeited its role as world leader and no longer calls the shots in global trade.

The Bible clearly prophesies that in the end time the greatest nation ever to exist in world history will suddenly have its might and superpower status taken away.

Even while the U.S. was still powerful and reaping the birthright blessings, Herbert W. Armstrong wrote in his book The United States and Britain in Prophecy, “You need to wake up to the fact that the United States, even still possessing unmatched power, is afraid—fears—to use it, just as God said: ‘I will break the pride of your power.’ … The United States is fast riding to the greatest fall that ever befell any nation!”

America is falling, and it is falling very quickly even now.

Isaiah 23 prophesies of a “mart of nations” (verse 3) that will form in this end time and contribute to America’s rapid fall. This is a massive trade alliance between a German-led Europe and Asia that exists for the sole purpose of competing with America and Britain.

In Isaiah 23:1, China is called by its ancient name, Chittim. The same verse calls the German-dominated European combine Tyre, which was a major economic power extant at the time the prophecy was written.

The cptpp is just the latest massive trade alliance that excludes the U.S.

The fulfillment of this prophecy in light of the cptpp is even more telling when you realize that Isaiah 23 identifies Japan as a member of this alliance. Verse 14 says that the “ships of Tarshish” will play a major role in this mart. “Herbert W. Armstrong’s Ambassador College taught over 40 years ago that Tarshish is Japan in Bible prophecy for today,” wrote Trumpet editor in chief Gerald Flurry in his booklet Isaiah’s End-Time Vision. “So this verse is referring to the supertanker fleet of Japan.”

Japan is leading the cptpp alliance. And just last month, Japan entered into a historic trade agreement with the European Union, which created the world’s largest trade bloc. Japan’s role in both of these agreements and its alliance with the EU is fulfilling the Isaiah 23 prophecy. The coming economic siege will inflame the riots and unrest prophesied in Ezekiel 5 to hit America.

In his book Ezekiel: The End-Time Prophet, Mr. Flurry writes:

Prophecy indicates that the German-led European Union will soon join forces with Russia, China and Japan to shut the U.S. out of more and more markets (see Isaiah 23). As the U.S. and Britain become less and less competitive worldwide, unemployment will steadily increase. …