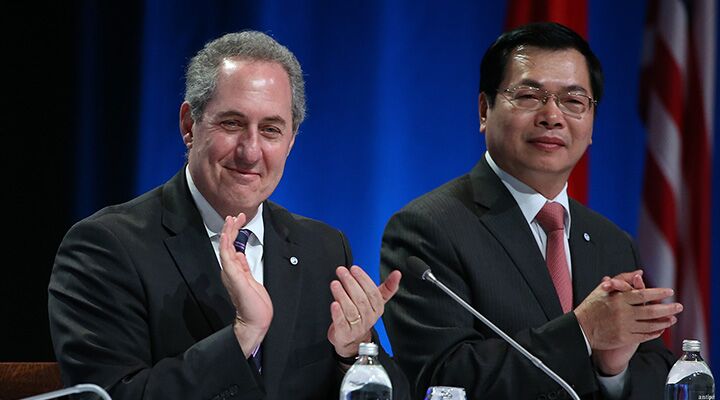 Soon it could be law.

The Trans-Pacific Partnership (tpp) is the biggest global trade deal in 20 years. It involves 12 countries in the Pacific region, comprises roughly 800 million people, and accounts for 40 percent of the world’s gross domestic product.

The nations involved are Australia, Brunei, Canada, Chile, Japan, Malaysia, Mexico, New Zealand, Peru, Singapore, the United States and Vietnam. So if you live in any of these nations, you’d best sit up and take note.

The tpp is floated as a free-trade deal. It aims to liberalize trade and investment and establish new rules outside the World Trade Organization guidelines. The deal is supposed to stimulate jobs and economic growth through expanded trade and investment opportunities in member nations. It is supposed to cut tariffs pertaining to manufactured products and most agricultural goods.

For America, it is also a countermeasure to the increasing interconnectivity of Asia—particularly regarding China.

But if this is such a good deal, why have we heard so little about it? This is, after all, a deal that topped President Barack Obama’s agenda for 2016.

There is a reason this deal has been under secret negotiation for seven years. Most critics of the deal claim that powerful corporations will be the main benefactors. The big multinational companies know that if they want this deal ratified by member governments, the details need to be murky. These companies also understand that there will naturally be a lot of grievances with any deal that involves give and take. After all, this deal is rewriting trade rules for one third of the global economy and international trade.

“In the coming weeks and months, you’ll be able to read every word of this agreement online well before I sign it,” President Obama said in October. The phrase “well before” apparently has a different connotation for U.S. presidents than for most people. The full, legally-binding text of the agreement wasn’t released until January 26—just nine days before the deal was signed in Auckland, New Zealand. It still needs to be ratified by the various governments.

Now many tpp critics are scrambling to raise public awareness of the deal, which has been characterized as a “leviathan” and a “labyrinthine” of legal mumbo jumbo. To plumb the depths of the 30-chapter charter will probably take months, not days. But more than a few troubling facts have already come to light.

The tpp requires member nations to accept all food imports from exporting countries that claim that their food safety regime is “equivalent” to the importing country’s. This seems prone to abuse; and abusers will be hard to detect. The U.S. Food and Drug Administration currently inspects less than 1 percent of all seafood imports. That number will fall as nations like Malaysia and Vietnam, as well as seafood-importing conglomerates, enter the market.

Food labeling may also change. Under the agreement, food labels can be challenged as “trade barriers.” This could mean labels will not have to conform to U.S. standards. They may not have to show where food comes from, how it is produced, or if it is genetically modified.

As with the aforementioned food safety changes, if a nation’s environmental laws harm corporate profits, then the nation opens itself up for a lawsuit. But this is not entirely new. Under a trade agreement similar to the tpp, the Canadian government was sued for $250 million by a foreign-owned energy company because Quebec banned fracking. Threats from big businesses could potentially impact government decision making. Advocates say this may actually help ensure governments cannot use environmental law for political purposes.

The tpp will enact stricter copyright laws. If you download something off the Internet that is copyrighted, even unintentionally, you could now be at risk of fines, Internet disconnection and criminal charges. While piracy is already illegal, the cost of infringement is about to rise substantially. And with that rise in punishment will come more thorough policing. It is still unclear, but your Internet provider may be required to monitor your activities.

To those who make and maintain websites, your anonymity is over too. Until now, website owners could keep their names and addresses private. Now full disclosure is required. If a government doesn’t like what you say on your website, it will have your name and address.

In 1993, Australia made a trade deal with Hong Kong that was very similar to the tpp. In 2011, cigarette maker Philip Morris attempted to sue the Australian government over plain-packaging legislation. It claimed the plain packaging harmed its intellectual property in regards to famous brands like Marlboro or Longbeach. By making all cigarette packages plain, the Australian government supposedly hurt Philip Morris’s future profits. While the lawsuit failed this past December, it cost Australian taxpayers millions in legal fees.

Australian Greens Sen. Peter Whish-Wilson said Australia “dodged a bullet” with the ruling. However Australia is now signing another deal giving corporations the right to sue nations for making laws that hurt their profits. Whish-Wilson called the tpp “the Damocles sword hanging over Australia’s sovereignty and our right to legislate in the public interest.”

This free-trade agreement does a lot to subjugate nations under corporations.

Australian Prime Minister Malcolm Turnbull called the deal “a gigantic foundation stone” for the economy to build on. It is gigantic—affecting 800 million people. But it’s really more of a millstone.

Times change quickly. This deal was secret for seven years, then suddenly it was signed. The way one third of global trade is handled has shifted overnight. Privacy policy just changed dramatically in the blink of an eye. A degree of sovereignty was forfeited to international companies.

The Trans-Pacific Partnership will not be the economic boost its promoters say it will. There is, however, a new world economy on the way. And while most people don’t know it, it doesn’t have to be a secret! We at theTrumpet.com proclaim it openly. People are going to marvel at how efficiently it works.

Interested? Read our article “A New World Economy” to find out more.