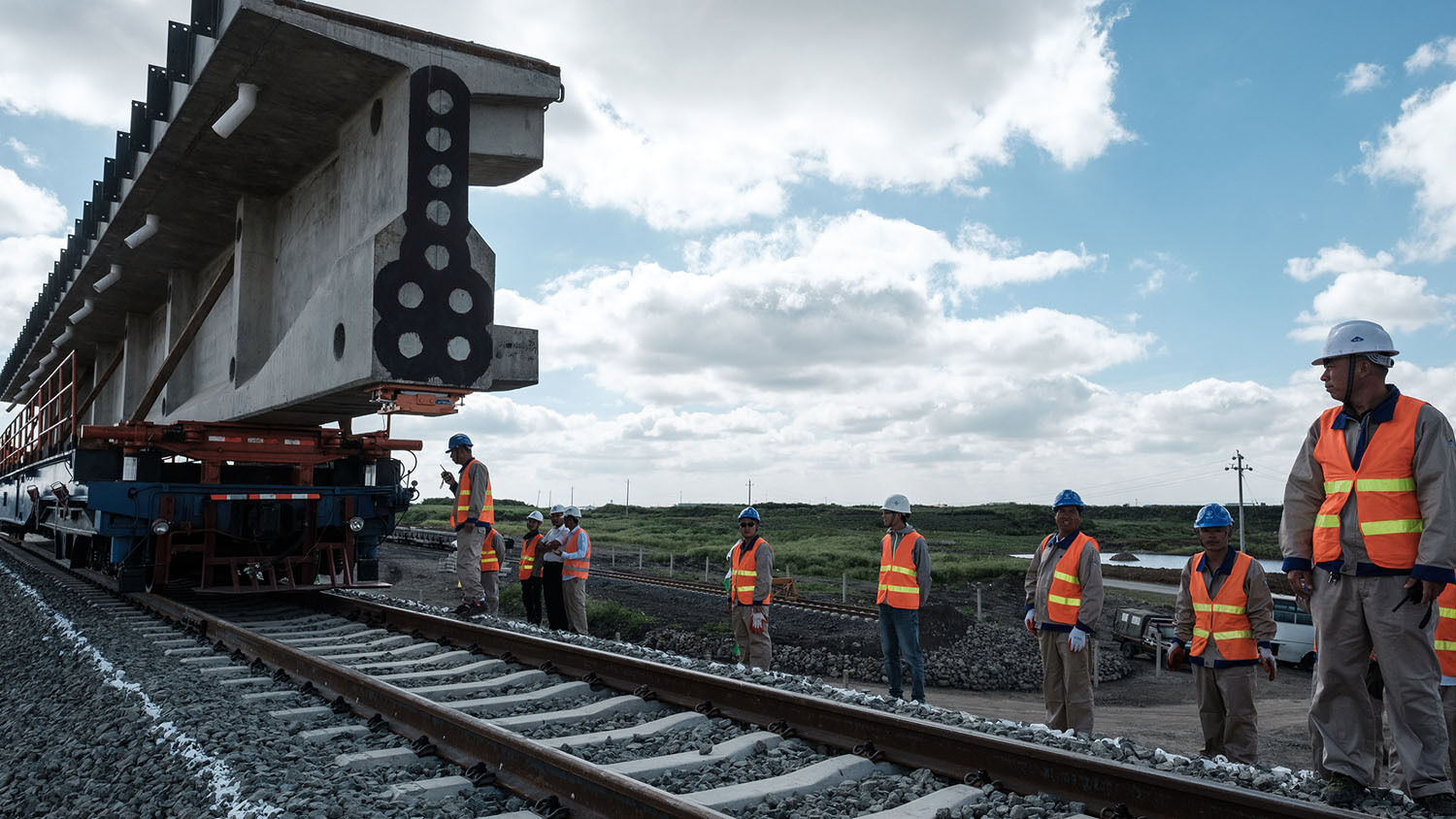 Chinese workers stand at the construction site of Standard Gauge Railway during the Presidential Inspection of the SGR Nairobi-Naivasha Phase 2A project in Nairobi, Kenya, on June 23, 2018.
YASUYOSHI CHIBA/AFP/Getty Images

China may be preparing to take control of Kenya’s largest port as a result of debt-trap diplomacy, according to recent African media reports.

The Kenyan government is at risk of “losing the lucrative Mombasa port to China should the country fail to repay huge loans advanced by Chinese lenders,” African Stand wrote on December 20.

Since 2013, Kenya has accepted some $4.9 billion for the construction of the Standard Gauge Railway (sgr) connecting Mombasa, the largest port in East Africa, and Kenya’s capital, Nairobi. The sgr is the largest infrastructure project Kenya has undertaken since its independence. But in its first year of operation, the project reported losses equivalent to $98 million, making Kenya’s servicing of the loans unmanageable.

Africa Stand noted that, besides the Mombasa port, Kenya could also be pressured to hand the Chinese control of the Inland Container Depot in Nairobi. “Implications of a takeover would be grave, including the thousands of port workers who would be forced to work under the Chinese lenders,” it wrote.

Authorities in both Kenya and China have refuted reports. But if China were to take control over some Kenyan assets due to its failure to repay loans, it would not be China’s first time.

In 2013, Chinese President Xi Jinping announced his plans to rebuild the Silk Road, an ancient network of trade routes that facilitated flow of goods, ideas and culture across Asia, the Middle East, Africa and Europe. The revived version, called the “Belt and Road Initiative” (bri) aims to connect 60 percent of the global population to China with vast infrastructure projects.

Sri Lanka was among the most enthusiastic nations to welcome China’s quick cash to build bri-related infrastructure. It accepted billions of dollars in loans for such projects as the Magampura Mahinda Rajapaksa Port in Hambantota.

This port is at a key location for China’s maritime “road.” But for the Sri Lankan economy, the port was a bust. Instead of fueling growth, the port (and other Chinese-funded infrastructure projects, such at the “world’s emptiest airport” in Mattala) sunk Sri Lanka deeply into debt.

By 2016, a third of Sri Lanka’s total government revenue went toward servicing Chinese loans, and the nation was forced to apply for debt relief with the International Monetary Fund. But the imf provided only temporary relief, and the Sri Lankan leadership soon felt that the only course of action was to give China a controlling stake in the Rajapaksa Port for 99 years. The handover set off alarms in Sri Lanka and beyond because it represented a Chinese victory with potential military applications. “The acquisition provided Beijing with a deepwater port in the region in which it can dock its navy, off the coast of its key regional competitor, India,” Foreign Policy wrote on October 29.

Sri Lanka is often cited as the textbook case of China’s “debt-trap diplomacy.” But Pakistan, Montenegro, Djibouti, Zambia and the Maldives are all in similarly precarious positions, thanks to China’s bri loans, and pundits worry that they may be forced to hand over assets to Beijing. And now Kenya may be added to this growing list.

“China wants to avoid the impression that it is sinking its dragon claws into other countries,” said Lu Xiankun, senior research fellow at the Shanghai Center for Global Trade and Economic Governance, during a 2016 imd Discovery Event. But as bri progress continues, it is becoming clearer that for many nations, that is essentially what is happening.

In the July 2014 Trumpet issue, editor in chief Gerald Flurry wrote about this quickly approaching era. “These ‘times of the Gentiles’ are yet to be fully realized,” but “we are in the outer edges of this catastrophic storm,” he wrote (“What Are the Times of the Gentiles?”).

He explained that the term Gentile refers to “non-Israelite peoples,” adding that the Israelite peoples constitute “a lot more than the little nation in the Middle East.” In end-time prophecy, “Israel” refers mostly to modern-day America and Britain. (For a thorough explanation, order a copy of our free book The United States and Britain in Prophecy, by Herbert W. Armstrong.)

For many decades, American and British supremacy has brought stability to much of the world. But in “the times of the Gentiles,” power is being transferred away from them and toward two main blocs of non-Israelite nations. “While there are many Gentile nations around today, when this prophecy is completely fulfilled there will be two major powers,” Mr. Flurry wrote. One of these will revolve around Germany, and the other around China and Russia.

China’s increasing expansion of the bri and related initiatives is shifting global power away from the Israelite nations and toward these other nations. The project’s imbalanced loan terms for nations such as Kenya and Sri Lanka makes the dangers of the shift more plain.

Mr. Flurry pointed out that though the shift in global power now underway is deeply worrisome, it is connected to good news. He wrote:

To understand more about the rise of China and the “good news” tied to it, read “What Are the Times of the Gentiles?” and “Brave New World (Made in China).”