Live Personal Appearance Campaigns bring the Trumpet’s message of warning and hope to hundreds—maybe even you. 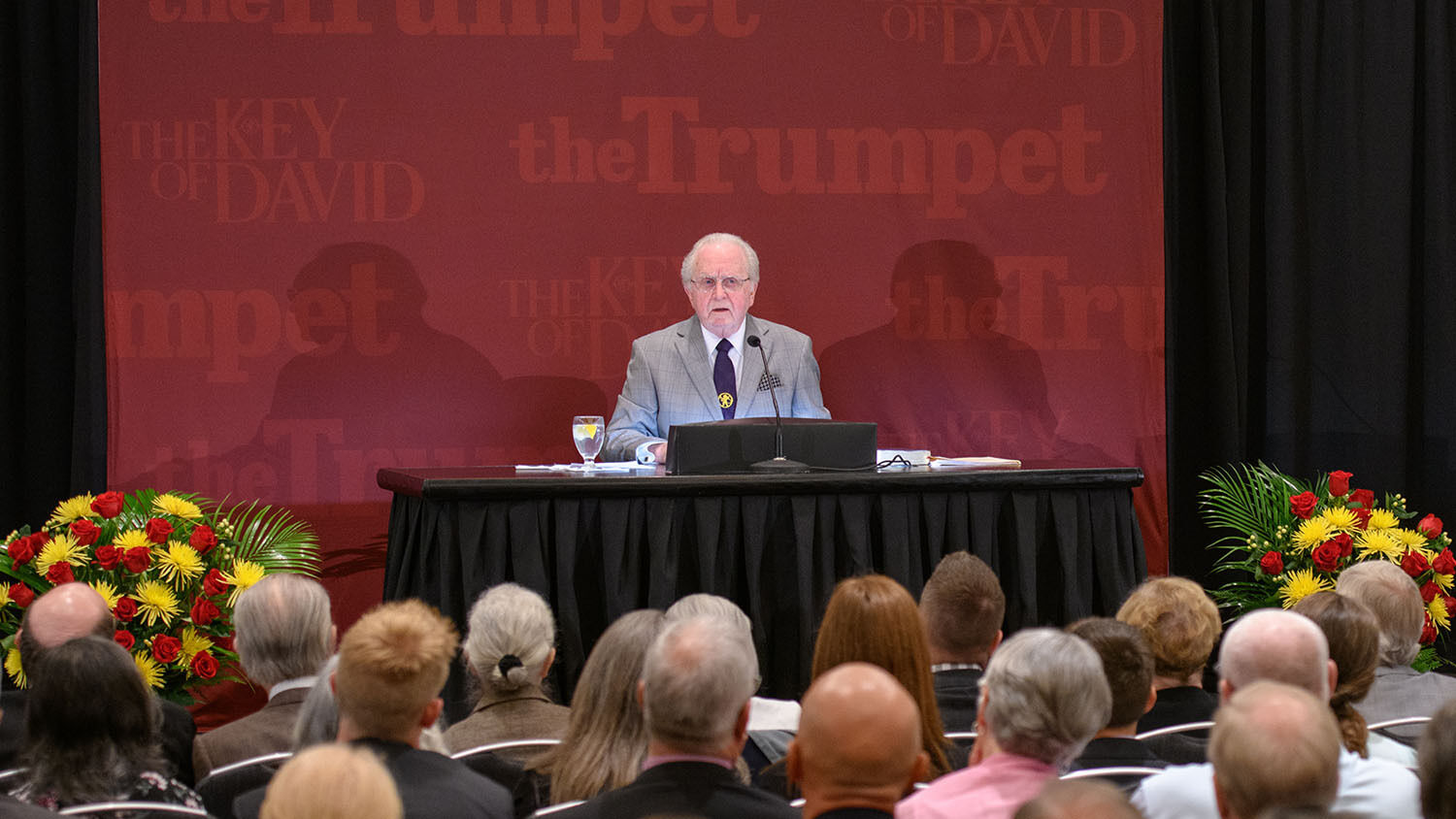 Live Personal Appearance Campaigns bring the Trumpet’s message of warning and hope to hundreds—maybe even you.

You can see the Trumpet live. Not just read it, not just hear it, not just view it, but attend it and experience it in person. How? By attending a Trumpet Personal Appearance Campaign.

“The audience was very positive and receptive,” Mr. Flurry wrote after a Los Angeles-area campaign in a Jan. 25, 2018, Trumpet Brief e-mail message. “It was wonderful to have that face-to-face contact with some of our readers.”

Mr. Flurry’s son, Trumpet executive editor Stephen Flurry, has conducted campaigns in London, England, and Belfast, Northern Ireland. In the midst of the London campaign, he wrote in a Trumpet Brief e-mail, “These campaigns are aimed at stirring [Trumpet readers] to conviction and action” (Oct. 23, 2018).

Trumpet Personal Appearance Campaigns are patterned after the campaigns conducted by Herbert W. Armstrong. In addition to founding the Trumpet’s predecessor, the Plain Truth, and presenting the World Tomorrow television and radio programs, Mr. Armstrong traveled around the world delivering the same message in person at lectures to as many as 24,000 people at a time.

Although Trumpet campaigns are smaller, they accomplish the same purpose, using the same pattern. More importantly, they deliver the same sober yet hopeful biblical prophetic message that Mr. Armstrong delivered throughout his 50-year ministry prior to his death in 1986. Mr. Flurry’s campaign subjects have included the hope in Bible prophecy, “God’s master plan for you personally,” God’s intervention in world events, the uselessness of Bible prophecy unless it builds faith, the living Savior Jesus Christ, what Christ is doing today, boldly coming before God’s throne, how physical family represents God’s Family, the transcendent potential of human beings in the afterlife, the inspiring vision of the book of Hebrews, evolution, God’s Sabbath and holy days, and Christ’s admonition to “watch and pray always.”

One event coordinator in Houston characterized Mr. Flurry’s lectures as “masterfully put together and delivered,” adding, “I know that God inspired that. It was a noticeably strong message both nights, and the people responded positively to that.”

“I was amazed how he painted a picture of this way of life,” another coordinator said after a campaign in Chicago. “He reminded me of Mr. Armstrong by addressing the audience like a loving grandfather helping to guide the way.”

What is it like to attend a Trumpet Personal Appearance Campaign?

Trumpet subscribers arriving at the hotel ballroom to attend the lecture are greeted by campaign coordinators and other volunteers who are members of the Philadelphia Church of God, of which Mr. Flurry is the pastor general. These volunteers and their families help prepare for the lectures by setting up tables, chairs, banners and backdrops, and setting up and operating audio-video equipment. When Trumpet subscribers arrive, the volunteers welcome them, scan tickets, and provide information about free literature and follow-up Bible studies. One volunteer said his fellow volunteers had a “bubbly excitement” for the opportunity to contribute to the work of the Trumpet directly and in person. Most drive for more than an hour, with some driving hundreds of miles one way or taking off work in order to volunteer.

Each campaign consists of two lectures on two days, typically Sunday afternoons and Monday evenings. Following a short video presentation, Mr. Flurry delivers a 90-minute lecture. Afterward, many subscribers take the opportunity to meet Mr. Flurry. He converses with them for a couple of hours about world events, prophecy, the Bible and, in some cases, becoming more involved with the work of the Trumpet. Other Church ministers also make themselves available to chat with subscribers.

“I was very impressed with the co-workers that I visited with,” one minister said after a campaign. “They seemed to have a good bit of knowledge about world events and what we teach doctrinally. More importantly, most had attitudes that seemed very teachable.”

Trumpet subscribers can also visit with Church member volunteers as they staff tables offering free literature, including dozens of books and booklets written by Mr. Flurry and free subscriptions to Royal Vision, the Christian-living sister magazine to the Trumpet. Sign-up sheets are also available for subscribers interested in attending follow-up Bible studies. The studies take place the weekends following the campaign, in the same cities, and are given by Church ministers on subjects designed to build on Mr. Flurry’s lectures. Subjects have included living faith, the book of Hebrews, the Sabbath and current news. As a result of attending campaigns and subsequent Bible studies, some Trumpet subscribers have become members of the Philadelphia Church of God, lending their full support to Mr. Flurry and the Church. Some have even become campaign volunteers themselves.

“We aim to be a stronger witness,” Mr. Flurry said regarding attendees of the campaigns and Bible studies. “Hopefully a few will become members in the Church, which has a big impact on God’s work.”

“This evening was an eye-opening event,” one guest said after attending Stephen Flurry’s campaign in London. “It taught us so much that we didn’t know before, and things we’ve been taking for granted. So it was a very good evening. I wish more of these can be organized.”

At the London campaign, people attended from England, Wales, Scotland, Northern Ireland, the Isle of Man, Germany and the Netherlands. One guest said, “I really enjoyed this evening. I just love the way the world’s crisis is merged with the Bible and the teaching. And I think a lot of the churches out there are not giving the correct teaching and [are] leading the flock astray.”

“Everyone was very attentive during the 90-minute lecture, and we conversed afterward for about two hours,” Stephen Flurry said. “I am so glad that each of them made the effort to attend, and it was a thrill for me to speak to them and to know that God might be working in their lives.”

Gerald Flurry gave two campaigns in 1994, 10 in 1999–2000, and 10 more in 2006–2008. In spring 2017, the Church purchased a corporate jet, largely to enable him to meet more supporters of the Trumpet and to restart the Personal Appearance Campaigns. Since then, he has conducted campaigns in Chicago, Illinois; Los Angeles, California; Houston, Texas; Phoenix, Arizona; Columbus, Ohio; Greenville, South Carolina; and Toronto, Ontario.

Mr. Flurry has scheduled more appearances for 2019, including New York and Central Florida. Stephen Flurry plans to present lectures in Glasgow, Scotland (mid-March), Manchester, England (May) and in other cities later in the year.

How can you attend a Trumpet Personal Appearance Campaign in your city?

If you have a Trumpet subscription and Mr. Flurry schedules a campaign within about 200 miles of your mailing address, you will receive an invitation letter about a month prior to the campaign with instructions on how to register. (Like the Trumpet, all Philadelphia Church of God publications, programs and campaigns are completely free.) Once you are registered, you will receive details on the time and location of the campaign, typically the ballroom of a quality hotel. Questions can be directed to pac@theTrumpet.com.

What if none of the upcoming campaigns come to your part of the world?

For Trumpet subscribers around the world who want the Personal Appearance Campaign experience, there is good news. Executive editor Stephen Flurry will present an online campaign on February 24 (4 p.m., gmt). You can watch it live at theTrumpet.com.

“[E]ach person matters immensely,” Stephen Flurry wrote in his Oct. 23, 2018, Trumpet Brief, “and our staff members have been praying that the message will really sink in for everyone who hears it.

“Hopefully this in-person experience will help dozens of people who have been comfortable just reading and following the message to act on it, to devote themselves to God. If they only follow the message and agree with it, they are missing out! God has immense blessings for those who turn to Him, and not just protection from the disasters that are about to explode here in Britain and around the world: much more than that. He also has an amazing, blessed, abundant way of life in store for those who submit to Him, and an amazing future greater than anything you can imagine. Of course, only those few whom God specially calls and works with even have the opportunity to respond to His message. But maybe that includes dozens of those who joined us here in London last night and tonight.

“And maybe that includes you.”