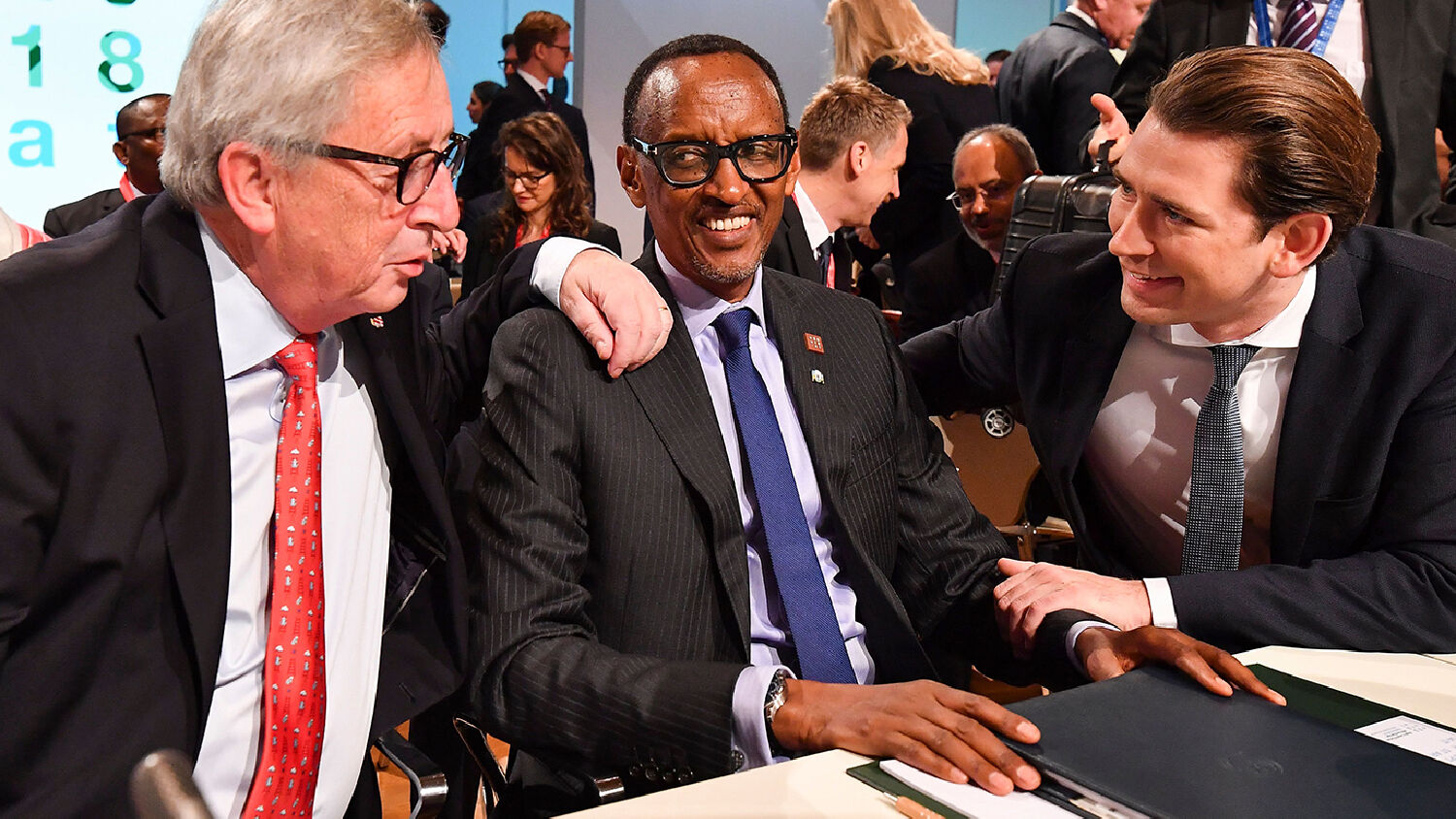 Austrian Chancellor Sebastian Kurz and Rwandan President Paul Kagame participated in the High-Level Forum Africa-Europe in Vienna on December 18. More than 50 official delegations from member states of the African Union and the European Union attended the forum, along with 1,000 innovators and representatives of companies and start-ups from Africa and Europe. The theme of the meeting was “Taking cooperation to the digital age.”

Chancellor Kurz currently holds the rotating presidency of the Council of the European Union, and President Kagame is the chairman of the African Union, which consists of 55 African countries.

Over a thousand companies, start-ups & entrepreneurs – among them the CEOs of the @WorldBank, @VodafoneGroup , @Siemens , @nokia and the @BMWGroup participated in today’s High Level Forum Africa-Europe #africaeurope2018.

The high-level meeting in Austria is seen as the first step of “a new Africa-Europe alliance,” according to the EU’s summary paper on the meeting. The joint projects created at the forum will extend the cooperation between the two continents to areas beyond their common challenge of migration. Among other things, Europe promised higher investments and cooperation in the sectors of African agriculture, financial technologies, start-ups, sustainable energies and education.

Why is Europe so interested in Africa? In the next decade, Africa’s resources will be an important consideration not only for Africa, but also for the powers that control or influence African nations. The African continent is rich in precious metals, gems, ivory, wood, natural gas and oil. Due to a lack of technology, education and infrastructure, many of these resources lie untapped or unused. As the store of available resources in the developed world nears exhaustion, the West’s dependence on imports rises. Thus Africa has become a battleground for the world’s major powers.

Europe knows investing in Africa means investing in the future. The number of well-educated workers in Africa is estimated to grow by 15 to 20 million annually over the next three decades. European investments now target this growing workforce to ensure that their local deployment will be productive.

.@_AfricanUnion Chair @PaulKagame at #africaeurope2018 opening: ”We are here to build on the efforts already underway: to forge a broad and durable #partnership that stands the test of time. That means there is going to be mutual benefit. #Africa gains and #Europe gains.“ pic.twitter.com/NVWVH4LbXG

So far, Europe’s trade relationships with African nations have been conditional, depending on how well those nations uphold human rights. Unlike Europe, China has ignored some nations’ human rights violations and has made major strides in exploiting Africa’s resources. (China’s global trade advances are explained in “Brave New World (Made in China),” an article in our latest Trumpet magazine.)

But Europe is now ready to do the same. Kurz emphasized that Europe “can’t leave Africa to the Chinese.” The Austrian chancellor is not the only one who believes that Europe has to change its approach when it comes to Africa.

When the joint forum took place, former German Defense Minister Karl-Theodor zu Guttenberg was also in Vienna, and he discussed the same topics with Austrian Finance Minister Hartwig Löger. Löger had invited Guttenberg to the traditional Finance Ministry event, Finanz im Dialog, which was held on the top floor of the Finance Ministry. The theme of the night was “Brave new Europe? How can the old Continent meet the challenges of global competition?” (Trumpet translation throughout).

At the event, Guttenberg criticized Europe’s response to China’s progress in Africa. He said that rather than meeting these decisive global developments, “the U.S. and Europe have been too busy with themselves. … Europe has been looking at Africa for far too long out of a developmental political nostalgia, instead of realizing that China in particular also sees strong political power potential in Africa.”

Guttenberg also emphasized that Europe has the ability to be much more involved in Africa, but it has so far lacked the will to use it. “Through the industry that we have in Europe, we have huge opportunities” for economic growth, Guttenberg said. Europe’s economic strength, industrial might and geographical proximity to the African continent put it in the ideal position to become Africa’s most important trading partner.

While Austria has been paving the way recently for this increased cooperation between the two continents, the industrial powerhouse of Germany will ultimately determine the success of the endeavor. Although Germany is currently in a major leadership crisis, Bible prophecy foretells that this country is soon to undergo a sudden transformation. Daniel 8 reveals that “a king of fierce countenance” will rise out of Germany in this end time. He will lead a united European superpower to become a world empire.

Austria’s finance minister is already looking to Baron Guttenberg for direction. Austria as a whole might soon do the same. For almost a decade, Trumpet editor in chief Gerald Flurry has predicted that this man will likely lead Europe to its prophesied destiny.

Part of that prophesied destiny is that Europe will soon control much of the world’s trade and resources. The Prophet Isaiah foretold that Europe would become the “marketplace for the nations” (Isaiah 23:3; New King James Version). The book of Revelation similarly warns of the rise of a merchant power in the heart of Europe. Revelation 18 uses the word “merchants” four times to describe the economic power of the prophesied European empire.

A prophecy in Ezekiel 27 gets specific about Europe’s cooperation with Africa. In an article titled “The Battleground” from the March 2006 issue, Trumpet managing editor Joel Hilliker and Trumpet writer Robert Morley explain:

Expect Africa, too, to fall sway to this emerging titan of trade. Read for yourself this prophecy of Europe’s exploitation of African resources: “The men of Rhodes [Dedan in the margin] traded with you [king of Tyrus—the revived Roman Empire]; many coastlands were your own special markets, they brought you in payment ivory tusks and ebony [merchandise peculiar to Africa]. … The traders of Sheba and Raamah traded with you; they exchanged for your wares the best of all kinds of spices, and all precious stones, and gold” (Ezekiel 27:15, 22; Revised Standard Version). (Dedan and Sheba were sons of Raamah, the great-grandson of Ham, from whom all black Africans descended.) As Britain and America fade out of Africa and into the sunset of superpowers past, Europe positions itself to march in. Germany in particular will corporately “reinvade” its old African colonial possessions, pillaging resources to feed the furnaces and drive the machinery that will turn out tools of war for a remilitarizing imperialist power.

The coming European superpower has been prophesied in detail in the Bible.

The situation in Africa is about to turn in Europe’s favor. Daniel 11 prophesies that Europe will take over many nations in Africa and the Middle East militarily and economically. Verse 44 foretells that Europe will then be troubled by “tidings from the east,” referring to China and other Asiatic nations. While there will likely be a brief cooperation between the two rising empires in Europe and Asia as they unite against America, the Bible prophesies that they will eventually clash violently.

God not only prophesied of today’s world kingdoms, He also foretold His supernatural intervention in world affairs. Request a free copy of Ezekiel: The End-Time Prophet, by Gerald Flurry, to learn more about the prophesied direction that today’s news will take and where all of this ultimately leads.