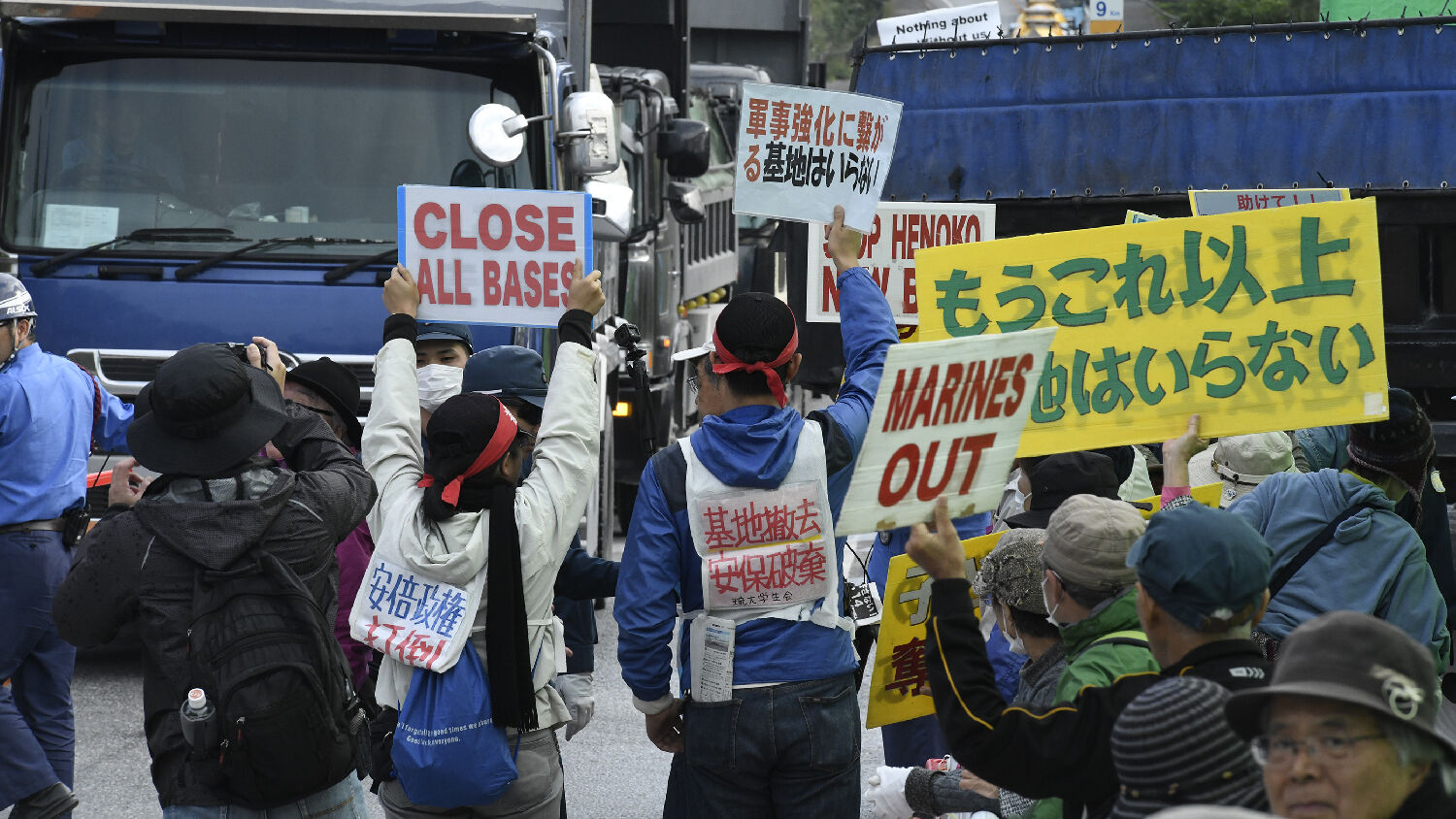 Protesters stage a rally outside the gate of U.S Base Camp Schwab on December 13 in Nago, Okinawa prefecture, Japan.
Getty Images

Controversy over U.S. Marine base could lead to Japan’s remilitarization.

An escalating dispute between Japan’s national government and local authorities on the island of Okinawa is threatening a key United States base. Despite the Okinawa prefecture’s plea, the Japanese government deployed five vessels on December 7 to begin reclamation work for the new U.S. military base there.

Japanese Defense Minister Takeshi Iwaya told the press, “We will start throwing in sand and earth (into the sea) on December 14, and there has been no change in that plan.”

The Okinawa prefecture has requested a postponement of reclamation work for the new base. When asked if the central government would suspend reclamation work, Iwaya said, “No, we won’t.” In August, more than 70,000 protesters rallied to stop the relocation of a U.S. military base in Okinawa. The protesters held up signs that said, “Henoko new base, NO!” and “Okinawans will not give up.”

Of the 50,000 U.S. troops in Japan, around 65 percent are stationed in Okinawa at U.S. Marine Corps Air Station Futenma. Reports of misconduct by U.S. troops often appear in local headlines. Okinawans have voiced concerns that U.S. troops increase noise, pollution and violent crime. For decades, they have opposed a plan to relocate the base to a less populated part of the island, preferring instead for it to be removed from Okinawa completely.

U.S. troops stationed in Okinawa has been one of the most sensitive issues affecting U.S.-Japanese relations.

World War ii ended when the Empire of Japan surrendered unconditionally to the United States. The U.S. then took control of Japan and drafted its Constitution. Article 9 of that Constitution states that “the Japanese people forever renounce war as a sovereign right of the nation.” This clause outlaws Japan from maintaining “land, sea and air forces, as well as other war potential.” The arrangement means the U.S. must provide for Japan’s defense. Under the Treaty of Mutual Cooperation and Security, America is obligated to station U.S. forces within Japan’s borders and potential conflict zones.

But the Japanese have been building their own military and are becoming more comfortable with it. In 2015, 71 percent of Japanese said that they were happy with the size and scope of Japan’s Self-Defense Forces—one of the top militaries in the world. With the U.S. slowly backing away from its defense commitments, China increasingly becoming more belligerent toward its neighbors, and an unstable North Korea in possession of nuclear weapons that could raze Japan, the Japanese are seriously looking to build up their military once again to counter these threats. Japan’s government currently supports keeping a U.S. base in Okinawa, but as Okinawans continue to protest, as the U.S. becomes less likely to fight a war to defend Japan, and as threats against Japan intensifies, this policy could quickly change. The removal of the U.S. base in Okinawa could be one of many steps toward a new era of Japanese militarism.

The Trumpet and its predecessor, the Plain Truth, have forecast for almost 50 years that Japan would remilitarize. In 1971, when Japan was still largely pacifist, Plain Truth editor in chief Herbert W. Armstrong wrote:

Mr. Armstrong based his forecast on a specific end-time Bible prophecy. Ezekiel 38 prophesies that a massive bloc of Asian nations, led by Russia and China, will form during the end time. Revelation 16 calls this conglomerate of Asian nations “the kings of the east” (verse 12). Ezekiel 38:6 says that “Gomer” and “Togarmah”—ancient names denoting the modern-day Japanese—will be part of this alliance. This indicates that Japan’s military reliance on America will soon end, and that Japan will rebuild its military.

To understand why the Trumpet watches the remilitarization of Japan, and to learn the details of Japan’s role in Bible prophecy, please request your free copies of Russia and China in Prophecy and He Was Right. These two booklets explain what is ahead for Japan, the U.S. and the world. These booklets detail the Bible’s forecast for Japan’s remilitarization, providing an understanding of geopolitics that nobody else has.